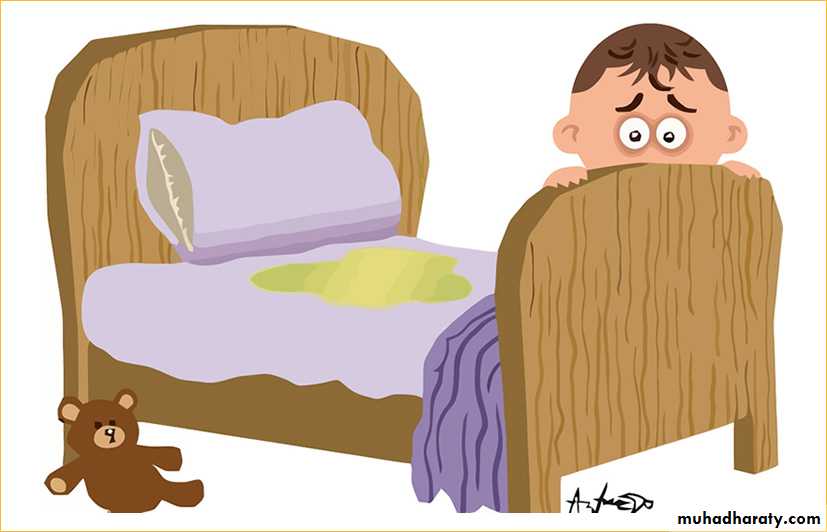 The infant has coordinated, reflex voiding as often as 15 to 20 times per day

The transitional phase of voiding refers to:

The period when children are acquiring bladder control.

3.Ability to consciously tighten the
external sphincter to prevent
incontinence

5.Motivation by the child to stay dry.
Steps of normal conscious bladder control 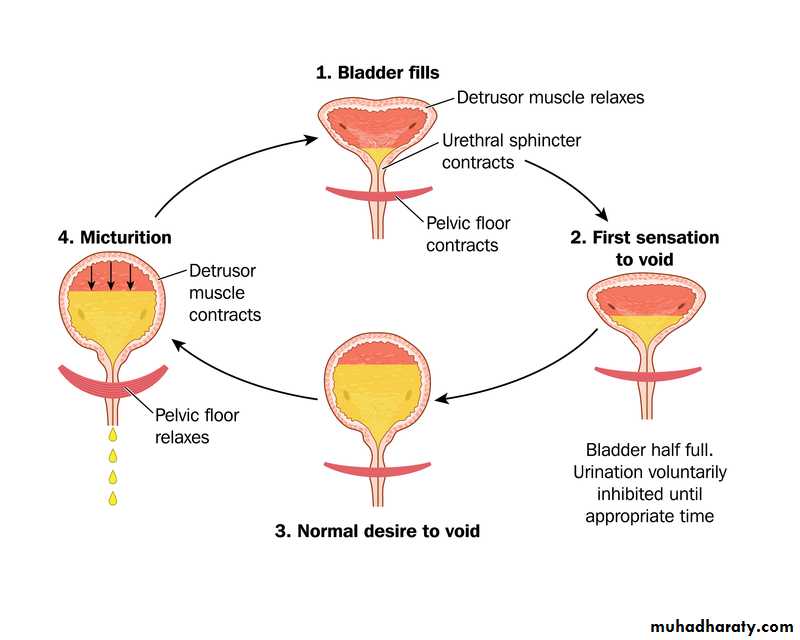 The occurrence of involuntary voiding at night at 5 yr, the age when volitional control of micturition is expected. 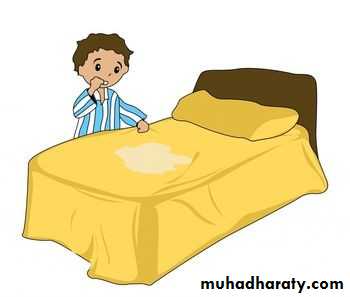 Primary (persistent) Enuresis: (70%-95%) is the condition describing the symptom of incontinence during sleep by a child who has never achieved consistent night-time dryness. This may further be subdivided into children who have enuresis only at night and those who also have daytime symptoms (urgency, frequency, or daytime wetting).

Secondary (regressive) Enuresis: (10%-25%) is the condition describing the symptom of incontinence during sleep by a child who has previously been dry for at least 6 months.

75% of children with enuresis are wet only at night

This distinction is important because the pathogenesis of the two patterns is different.

Approximately 60% of children with nocturnal enuresis are boys.

Family history is also important and is positive in 50% of cases.

Although primary nocturnal enuresis may be polygenetic, candidate genes have been localized to chromosomes 12 and 13.
Epidemiology

If one parent was enuretic, each child has a 44% risk of enuresis;

If both parents were enuretic, each child has a 77% likelihood of enuresis.

It ceases spontaneously in approximately 15% of involved children every year thereafter.

Its frequency among adults is less than 1%.

Is multifactorial and includes the following:

• Delayed maturation of the cortical mechanisms that allow voluntary control of the micturition reflex.
• Sleep disorder-enuretic children, who are classically described as being deep sleepers, although no specific sleep pattern has been described. Enuresis can occur in any stage of sleep .
Pathogenesis

• Reduced antidiuretic hormone production at night, resulting in an increased urine output, which explains why children with enuresis often are described as "soaking the bed."
• Genetic factors, with chromosomes 12 and 13q the likely sites of the gene for enuresis; family history is often positive in enuretic children, as described earlier.
Pathogenesis

• Organic factors, such as urinary tract infection (UTI) or obstructive uropathy, which is an uncommon cause of enuresis.
• Sleep apnea (snoring) secondary to enlarged adenoids.
Pathogenesis

To decide on appropriate investigations and treatment it is important to identify:

Whether the child has previously been dry at night without assistance for 6 months (i.e. this is secondary enuresis)?
If so, ask about any medical, physical or environmental, social or emotional causes or triggers for the change e.g. (bereavement, parental separation, etc.).

Whether there are any daytime symptoms (abnormal frequency of urination (either too frequent >7 times/day) or infrequent( < 4 times/day), urgency, daytime wetting, difficulty (straining) with poor stream, or pain on urination?

Do symptoms occur only in some situations, e.g is there avoidance of toilets at school?

Assess the pattern of bedwetting:

Consider asking the parents or carers to keep a diary of the child's fluid intake, bedwetting, and toileting patterns for 2 weeks.
Consider whether the child has Developmental, attention or learning difficulty?
Could this be maltreatment or the child is being punished for bedwetting?
Could this be Diabetes Mellitis?

A complete physical examination should include palpation of the abdomen and rectal examination after voiding to assess the possibility of a chronically distended bladder.
The child should be examined carefully for neurologic and spinal abnormalities.
Investigate (and treat) daytime symptoms before addressing enuresis, e.g. symptoms suggestive of diabetes, UTIs or constipation

To check for any abnormality of the urinary tract especially in the presence of voiding difficulties, or in children who do not respond appropriately to therapy.
Investigations

The parents should be certain that the child voids at bedtime.

If the child snores and the adenoids are enlarged, referral to an otolaryngologist should be considered, because adenoidectomy may result in cure of the enuresis.
Treatment (cont.)

Should be avoided in children younger than age 6 yr because enuresis is extremely common in younger children.

The simplest initial measure is motivational and includes a star chart for dry nights.

Waking children a few hours after they go to sleep to have them void often allows them to awaken dry, although this measure is not curative.

Some have recommended that children try holding their urine for longer periods during the day, but there is no evidence that this approach is beneficial.

Conditioning therapy involves use of an auditory alarm attached to electrodes in the underwear. The alarm sounds when voiding occurs and is intended to awaken children and alert them to void.
This form of therapy is considered curative and has a reported success of 30-60%. Often the alarm wakes up other family members and not the enuretic child; persistence for several months is necessary.
A vibratory alarm is available also. 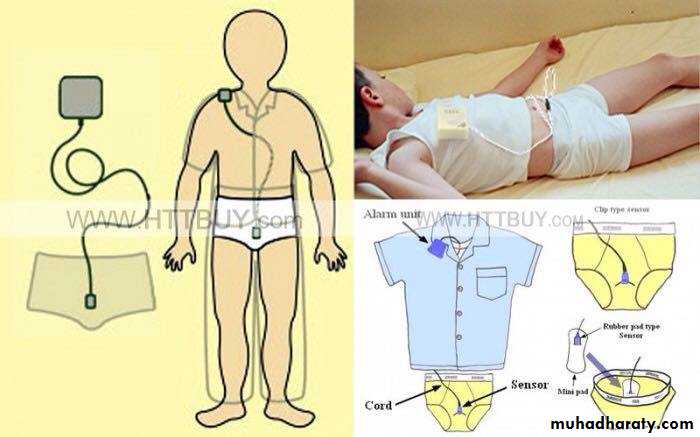 Conditioning therapy tends to be most effective in older children.

Another form of therapy to which some children respond is self-hypnosis.
The primary role of psychological therapy is to help the child deal with enuresis psychologically and help motivate arising to void at night if the child awakens with a full bladder

Is intended to treat the symptom of enuresis and is not curative:

which is a synthetic analog of antidiuretic hormone and reduces urine production overnight. It is available as a tablet, with a dosage of 0.2-0.6 mg at bedtime. It is important to reduce evening fluid intake, and the drug should not be used if the child has a systemic illness with vomiting or diarrhea. Hyponatremia has been reported in a few children using the nasal spray, primarily those who were not using the medication properly. It has not been reported in children using the tablets.

In children with rhinorrhea, the nasal spray is not absorbed and consequently is ineffective. Desmopressin acetate is effective in as many as 40% of children. If effective, it should be used for 3-6 mo, and then an attempt should be made to taper it. If tapering results in recurrent enuresis, the medication may be started again at the higher dosage. No adverse events have been reported with the long-term use of desmopressin acetate.
Desmopressin acetate, (cont.)

is a tricyclic antidepressant. This medication has mild anticholinergic and α-adrenergic effects and may alter the sleep pattern also. The dosage of imipramine is:
- 25 mg in children age 6-8 yr
- 50 mg in children age 9-12 yr, and
- 75 mg in teenagers.
Imipramine

Reported success rates are 30-60%. Side effects include anxiety, insomnia, and dry mouth. In addition, the drug is one of the most common causes of poisoning by prescription medication in younger siblings.

a pure anticholinergic agent, has been used in some children with primary nocturnal enuresis, but the response rate is low. This drug control muscle spasms
Oxybutynin chloride 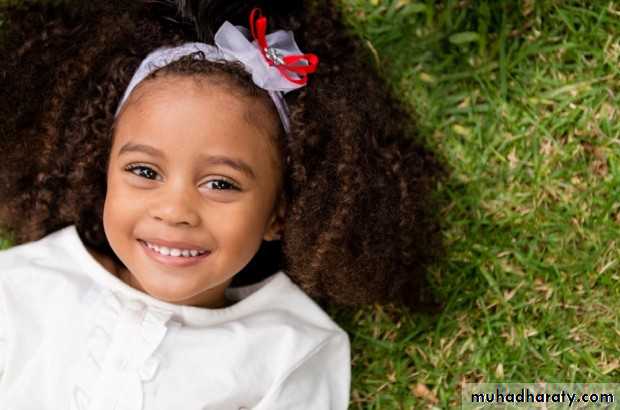