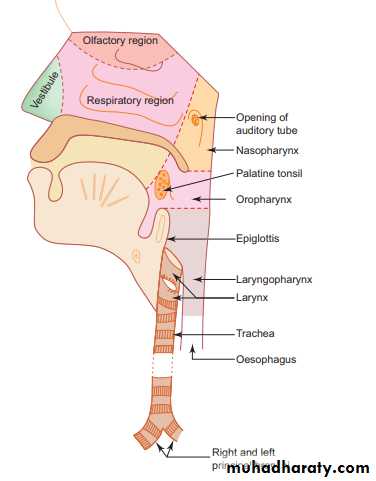 GENERAL STRUCTURE OF THE CONDUCTING PORTION OF THE RESPIRATORY TRACT : In general, the respiratory tract is made of four coats : 1. Mucosa: It includes the epithelial lining and the underlying lamina propria. The epithelium is usually pseudostratifi ed ciliated columnar epithelium with goblet cells. 2. Submucosa: It is a layer of loose connective tissue containing mixed glands. 3. Cartilage layer: This layer is mostly formed by hyaline cartilage plus smooth muscle. 4. Adventitia: It is a layer of fibroelastic connective tissue merging with the surrounding tissue. 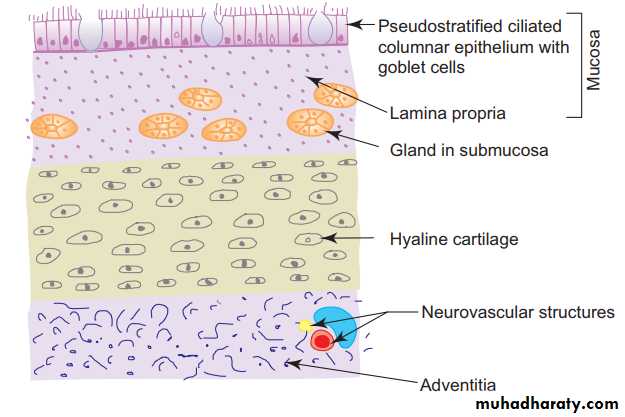 GENERAL STRUCTURE OF THE CONDUCTING PORTION OF THE RESPIRATORY TRACT

The nasal cavity is the beginning of the respiratory system, its framework is formed by bones and cartilages covered by mucous membrane, it is divided into right and left halves by nasal septum. Histologically, the wall of each half of the nasal cavity is divisible into three distinct regions.  1-Vestibule  2- Olfactory region  3- Respiratory region
1-Vestibule It is the anterior dilated part of the nasal cavity. The vestibule is lined by skin continuous with that on the exterior of the nose. Hair and sebaceous glands are present.
2- Olfactory region This region is confined to a smaller area and is found in the roof and the adjoining parts of nasal septum and lateral wall of nasal cavity. It is covered by a thick yellow olfactory mucosa functioning as the organ of smell.
olfactory mucosa is made of a thick olfactory epithelium and the underlying connective tissue, the lamina propria, The lamina propria contains serous glands (Bowman’s glands), bundles of olfactory nerves, blood vessels and lymphatics. The secretion of Bowman’s glands moistens the olfactory epithelium and serves as a solvent which dissolves odoriferous substances and thus stimulates the olfactory cells. 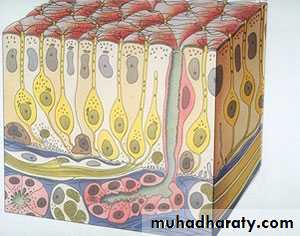 The olfactory epithelium is made of the following three types of cells (a) Olfactory cells—are the modifi ed bipolar nerve cells. Each cell has a cell body, a dendrite and an axon. The cell bodies contain round nuclei and are found at different levels in the epithelium forming a broad zone of round nuclei. The dendritic processes extend to the surface and end in knob-like structures, the olfactory vesicles from which non-motile olfactory hair arise. The axonal processes pass into the lamina propria and are collected into bundles of olfactory nerves .
(b) Sustentacular cells—are tall columnar cells that support the olfactory cells. They bear microvilli on their free surfaces. Each cell has a broad superficial part containing oval nucleus and a slender deep part attached to the basement membrane. The nuclei of the sustentacular cells lie near the free surface of the epithelium in the same level constituting a narrow zone of oval nuclei. The presence of yellow lipofuschin pigments in the cytoplasm suggests their phagocytic function as well.
(c) Basal cells—are conical in shape, do not reach the surface and give rise to other cell types 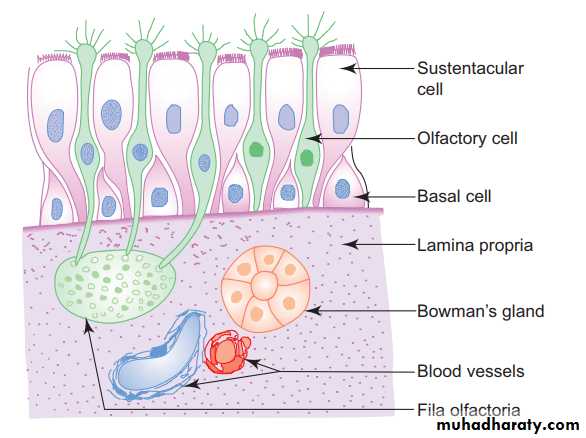 It lies behind the nasal cavity (nasopharynx), oral cavity (oropharynx) and larynx (laryngopharynx) Pharynx is composed of the following four coats: 1. Mucosa: This comprises epithelium and lamina propria. The epithelium is pseudo stratified ciliated columnar type in the nasopharynx and stratified squamous type in the oropharynx and laryngopharynx. Aggregation of lymphatic nodules in the lamina propria of the posterior wall and around the opening of the auditory tube in the nasopharynx results in the formation of pharyngeal and tubal tonsils, respectively. The palatine tonsil present in the lateral wall of the oropharynx and the lingual tonsil in the pharyngeal part of tongue, are already dealt with under lymphatic system.
2. Submucosa: It is formed by loose areolar connective tissue .
3. Muscle coat: This layer is formed by skeletal muscle arranged into inner longitudinal and outer circular layers. The circular layer is formed by the constrictors of pharynx .
4. Adventitia: It is formed by fibroelastic connective tissue . 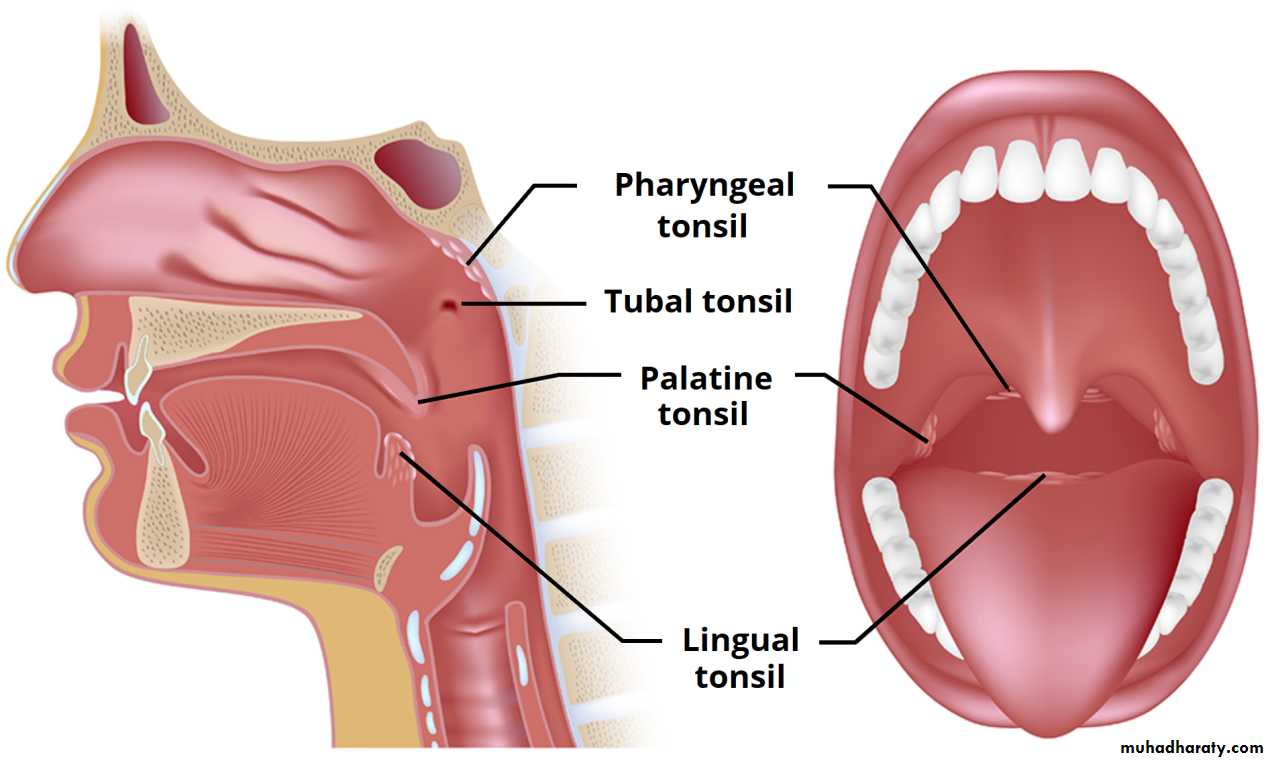 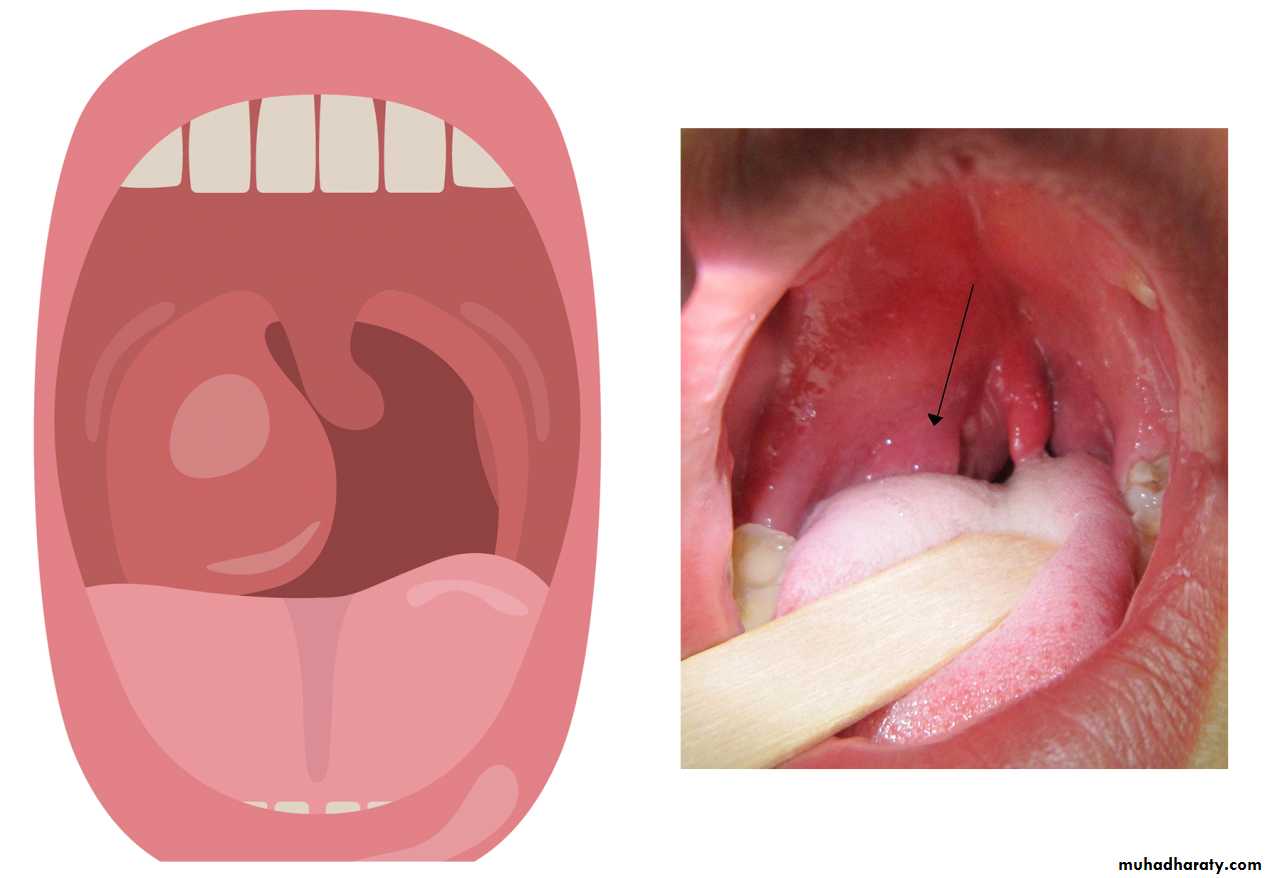