THE LUNGS The lungs are the principal respiratory organs that are situated one on either side of mediastinum in the thoracic cavity, they are covered by visceral pleura.
The structure of the lungs has to be understood keeping in mind their function of oxygenation of blood. The following features are essential for this purpose. 
A surface at which air (containing oxygen) can be brought into close contact with circulating blood. The barrier between air and blood has to be very thin to allow oxygen (and carbon dioxide) to pass through it, the surface has to be extensive enough to meet the oxygen requirements of the body. 
A system of tubes to convey air to and away from the surface at which exchanges take place. 
A rich network of blood capillaries present in intimate relationship to the surface at which exchanges take place. 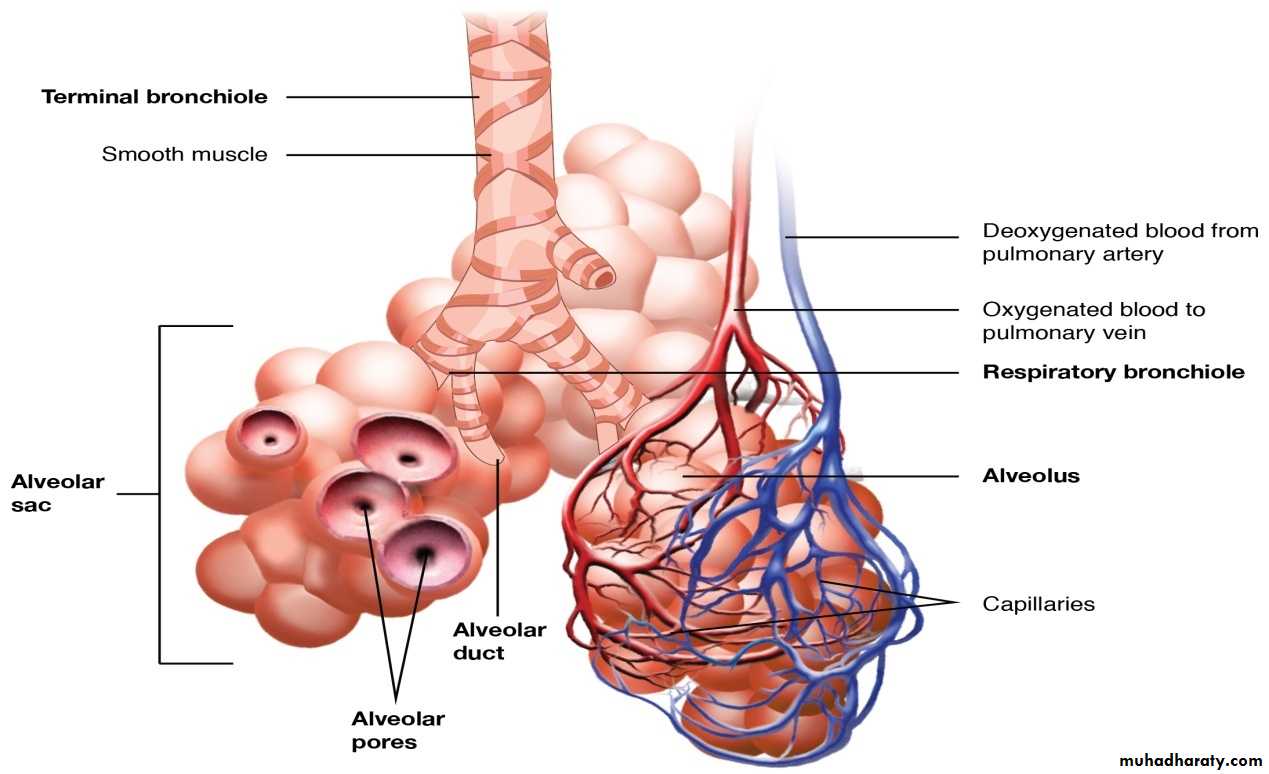 Intrapulmonary Passages On entering the lung the principal bronchus divides into secondary, or lobar bronchi (one for each lobe). Each lobar bronchus divides into tertiary, or segmental bronchi (one for each segment of the lobe). The segmental bronchi divide into smaller and smaller bronchi, which ultimately end in bronchioles. The lung substance is divided into numerous lobules each of which receives a lobular bronchiole. The lobular bronchiole gives off a number of terminal bronchioles indicated by their name the terminal bronchioles represent the most distal parts of the conducting passage. Each terminal bronchiole ends by dividing into respiratory bronchioles. These are so called because they are partly respiratory in function as some air sacs arise from them. Each respiratory bronchiole ends by dividing into a few alveolar ducts. Each alveolar duct ends in a passage, the atrium, which leads into a number of rounded alveolar sacs. Each alveolar sac is studded with a number of air sacs or alveoli. 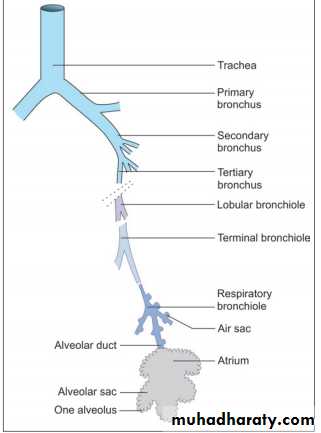 There are about 200 million alveoli in a normal lung. The total area of the alveolar surface of each lung is extensive. It has been estimated to be about 75 square meters. The total capillary surface area available for gaseous exchanges is about 125 square meters. Structure of Alveolar Wall Each alveolus has a very thin wall. The wall is lined by an epithelium consisting mainly of flattened squamous cells. The epithelium rests on a basement membrane. Deep to the basement membrane there is a layer of delicate connective tissue through which pulmonary capillaries run. These capillaries have the usual endothelial lining that rests on a basement membrane. The barrier between air and blood is made up of the epithelial cells and their basement membrane; by endothelial cells and their basement membrane; and by intervening connective tissue. At many places the two basement membranes fuse greatly reducing the thickness of the barrier. The endothelial cells lining the alveolar capillaries are remarkable for their extreme thinness. With the EM they are seen to have numerous projections extending into the capillary lumen, these projections greatly increase the surface of the cell membrane that is exposed to blood and is, therefore, available for exchange of gases. At many places the basement membrane of the endothelium fuses with that of the alveolar epithelium greatly reducing the thickness of the barrier between blood and air in alveoli.
Pneumocytes EM studies have shown that the cells forming the lining epithelium of alveoli (pneumocytes) are of various types . 
The most numerous cells are the squamous cells already referred to. They are called type I alveolar epithelial cells. Except in the region of the nucleus, these cells are reduced to a very thin layer. The edges of adjoining cells overlap and are united by tight junctions (preventing leakage of blood from capillaries into the alveolar lumen). They form the lining of 90% of the alveolar surface. 
Scattered in the epithelial lining there are rounded secretory cells bearing microvilli on their free surfaces. These are designated type II alveolar epithelial cells , their cytoplasm contains secretory granules that appear to be made up of several layers . These cells are believed to produce a secretion that forms a film over the alveolar epithelium. This film or pulmonary surfactant reduces surface tension and prevents collapse of the alveolus during expiration, type II cells may multiply to replace damaged type I cells.
Type III alveolar cells, or brush cells, of doubtful function, have also been described. 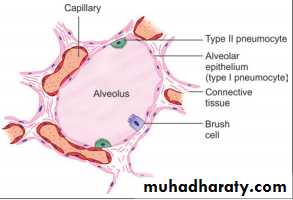