*This may be associated with retained products of conception subsequent to miscarriage or delivery, or a foreign body such as an intrauterine device. Retained tissues or foreign bodies act as a nidus for infection, frequently by flora ascending from the vaginal or anal region.
* Endometritis is either acute or chronic depending on whether there is a predominant neutrophilic or lymphoplasmacytic response; however, components of both may be present in otherwise normal endometrium. Generally the diagnosis of chronic endometritis requires the presence of plasma cells . Acute endometritis is frequently due to N. gonorrhoeae or C. trachomatis. Microscopically, neutrophilic infiltrate in the superficial endometrium and glands coexists with a stromal lymphoplasmacytic infiltrate. 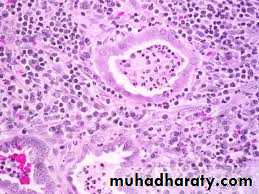 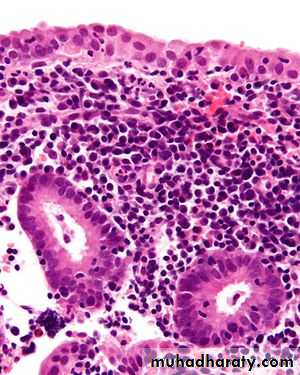 This is characterized by “the presence of endometrial glands and stroma in a location outside the endomyometrium.” It occurs in as many as 10% of women in their reproductive years and in nearly half of women with infertility. It may present as a pelvic mass filled with degenerating blood (chocolate cyst). It is frequently multifocal and may involve any tissue in the pelvis (ovaries, pouch of Douglas, uterine ligaments, tubes, and rectovaginal septum), less frequently in more remote sites of the peritoneal cavity and about the umbilicus. Three possibilities have been suugested to explain the origin of these lesions.
1. The regurgitation theory, currently the most accepted, proposes menstrual backflow through the fallopian tubes with subsequent implantation.
2. The metaplastic theory proposes endometrial differentiation of coelomic epithelium.
3. The vascular or lymphatic dissemination theory has been raised to explain extrapelvic endometriosis. 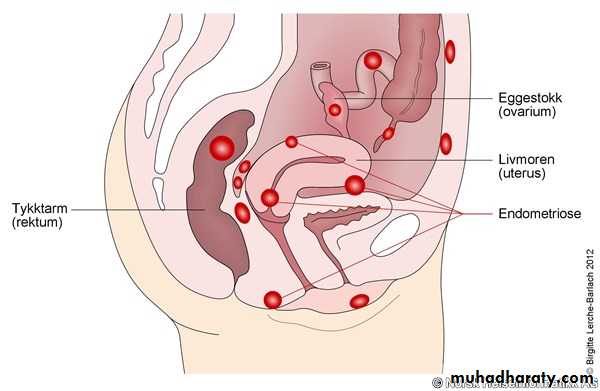 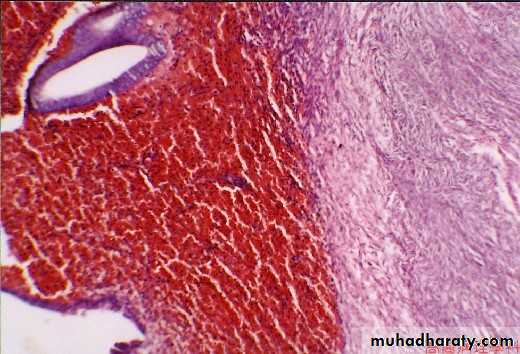 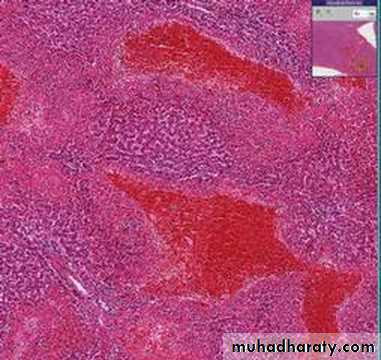 • Endometriosis almost always contains functioning endometrium, which undergoes cyclic bleeding. Because blood collects in these ectopic foci, they usually appear grossly as red-blue to yellow-brown nodules.
• They vary in size from microscopic up to 2 cm in diameter and lie on or just under the affected serosal surface. Often individual lesions coalesce to form larger masses.
• When the ovaries are involved, the lesions may form large, blood-filled cysts that are transformed into so-called chocolate cysts as the blood ages .
• hemorrhage and organization of the blood leads to widespread fibrosis, adherence of pelvic structures, sealing of the tubal fimbriated ends, and distortion of the oviducts and ovaries.
Microscopic features
• The histologic diagnosis depends on finding two of the following three features within the lesions:
1. Endometrial glands
2. Endometrial stroma, or
3. Hemosiderin pigment.

This is an exaggerated endometrial proliferation induced by sufficiently prolonged excess of estrogen relative to progestin. The severity of hyperplasia is classified according to two parameters
a. architectural crowding of the glands &
b. cytologic atypia.
Accordingly there are three categories
1. Simple hyperplasia
2. Complex hyperplasia
3. Atypical hyperplasia 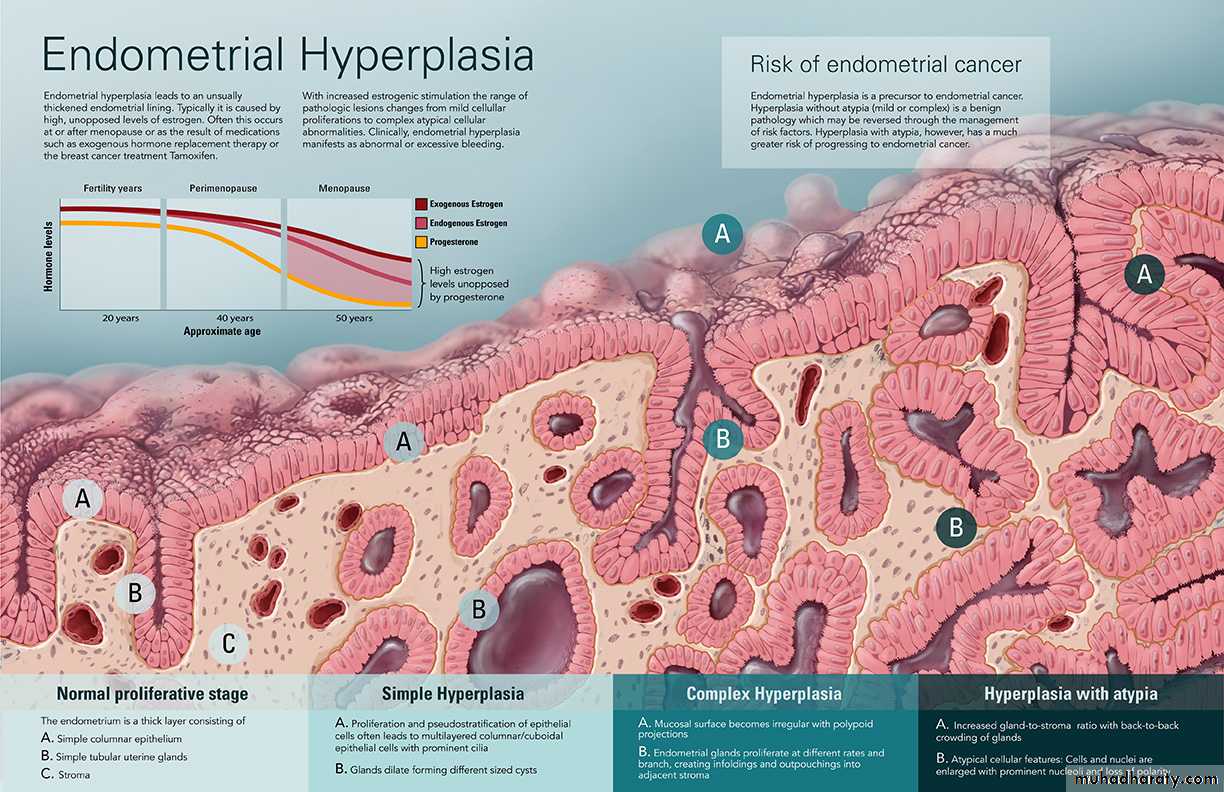 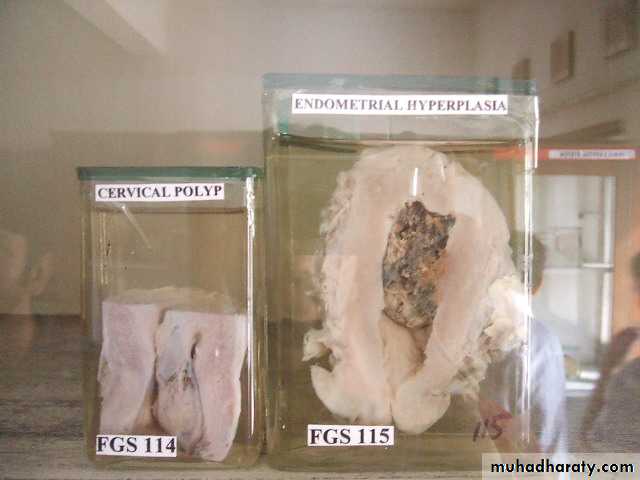 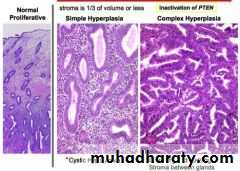 Leiomyomas are benign tumors that arise from the smooth muscle cells in the myometrium. Because of their firmness they are also called fibroids. They are the most common benign tumor in females and are found in 30% to 50% of women during reproductive life. Estrogens and possibly oral contraceptives stimulate their growth; conversely, they shrink postmenopausally. 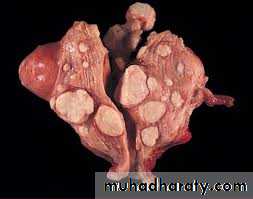 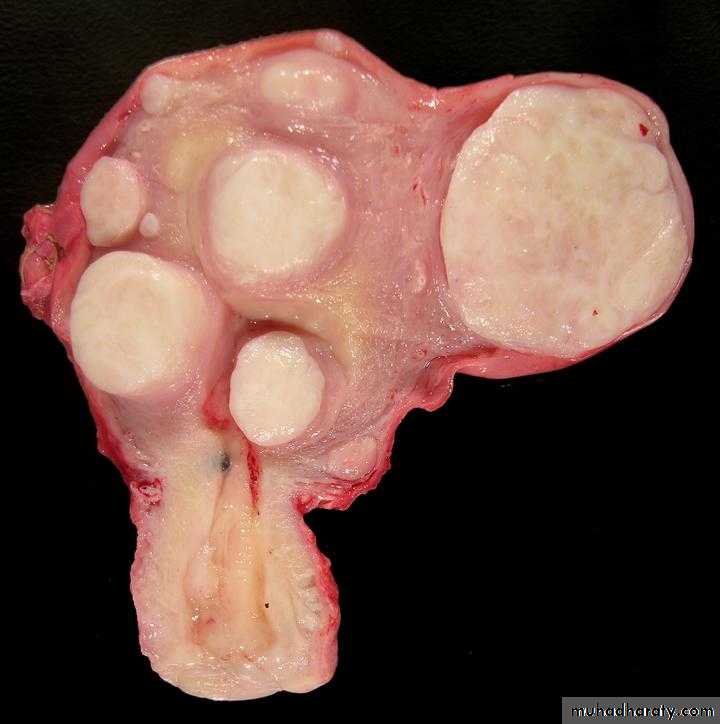 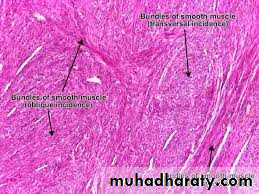 Leiomyosarcomas typically arise de novo from the mesenchymal cells of the myometrium. They are almost always solitary tumors, in contradistinction to the frequently multiple leiomyomas.
Gross features
• The tumor is typically bulky
• It infiltrates the uterine wall.
• Some times it projects into the endometrial cavity.
• They are frequently soft, hemorrhagic, and necrotic.

• They show a wide range of differentiation, from those that closely resemble leiomyoma to wildly anaplastic tumors.
• The diagnostic features of leiomyosarcoma include tumor necrosis, cytologic atypia, and mitotic activity. Since increased mitotic activity alone is sometimes seen in benign smooth muscle tumors in young women, an assessment of all three features is necessary to make a diagnosis of malignancy.
Recurrence after removal is common with these cancers, and many metastasize, typically to the lungs. 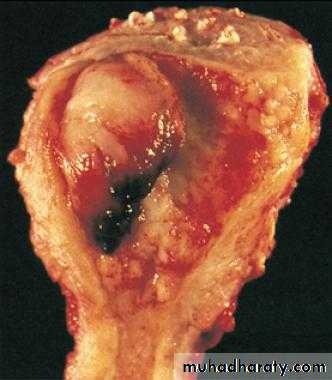 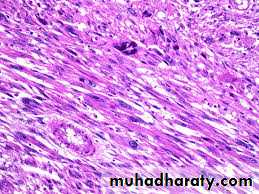 After the dramatic drop in the incidence of cervical carcinoma, EMC is currently the most frequent cancer occurring in the female genital tract.

• EMC may be exophytic (fungating, polypoid) or infiltrative.
Microscopic features
• The endometrioid carcinoma consists of malignant endometrial-like tubular glands of varying grades. Squamous metaplasia is frequent. Sometimes, the tumor is adeno-squamous carcinoma.
• Tumors originate in the mucosa and may infiltrate the myometrium and enter vascular spaces, with metastases to regional lymph nodes.
Serous carcinoma forms small tufts and papillary arrangements rather than the glands seen in endometrioid carcinoma, and has much greater cytologic atypia. They are particularly aggressive . 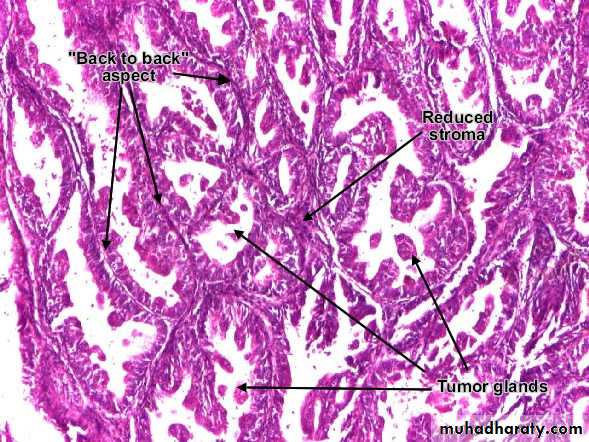 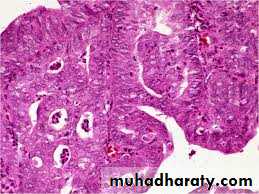 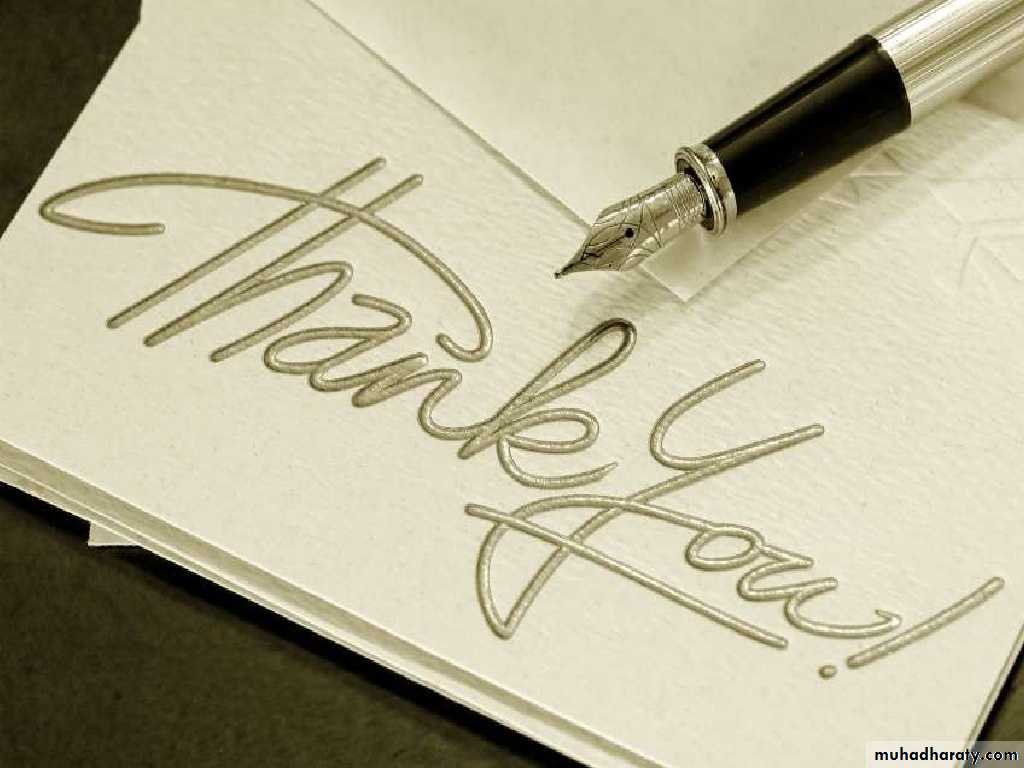