Pancreas divisum is the most common clinically significant congenital anomaly resulting from failure of fusion of pancreatic ducts. This leads to the main pancreatic duct draining only a small portion of the head, while the bulk of the pancreas drains through a minor duct. This creates a state of inadequate drainage for the bulky pancreatic secretions thus predisposes to chronic pancreatitis.
Annular pancreas results from abnormal pancreatic fusion due to failure of ventral bud to rotate properly; head of pancreas encircles duodenum as a collar and may constrict lumen completely. It can lead to duodenal obstruction.
Ectopic Pancreas is uncommon; favored sites are the stomach and duodenum. The ectopic tissue is small and submucosal in location. It can cause localized inflammation, or mucosal bleeding.
Congenital cysts: 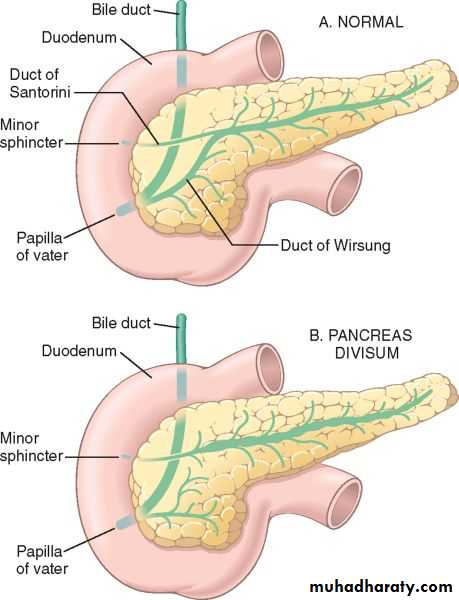 1. Gallstones and excessive alcohol intake; these are the main offenders.
2. Non-gallstone obstruction of the pancreatic ducts e.g. by periampullary tumors
3. Medications as with thiazide & frusemide diuretics
4. Trauma, both blunt and iatrogenic during surgery or endoscopy
5. Others such as metabolic disorders, ischemia and infections as with mumps
In up to 20% of patients there is no identifiable cause (idiopathic pancreatitis).

In milder forms there is edema & congestion of the organ with foci of fat necrosis. Fat necrosis results from enzymatic destruction of fat cells; the released fatty acids combine with calcium to form insoluble salts that precipitate locally and appear as yellow-white chalky deposits within & outside the pancreas e.g. in the omentum and mesentery.
The peritoneal cavity contains a brown-tinged fluid with fat globules.
In the most severe forms there is extensive parenchymal necrosis accompanied by diffuse hemorrhage.

These parallel the gross changes of edema, acute inflammation, and focal fat necrosis.
In more severe forms, necrosis involves all tissue constituents including islets of Langerhans
Vascular damage causes hemorrhage into the parenchyma of the pancreas. 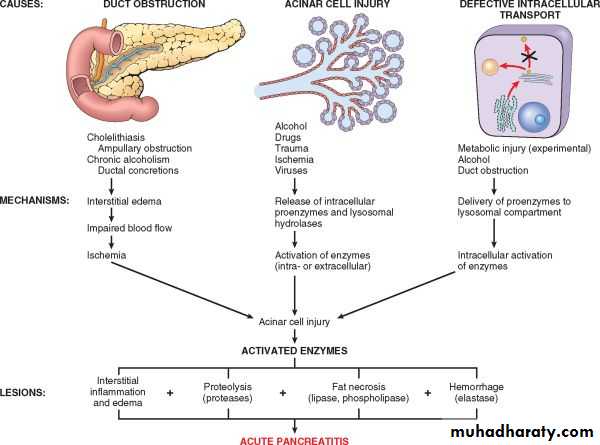 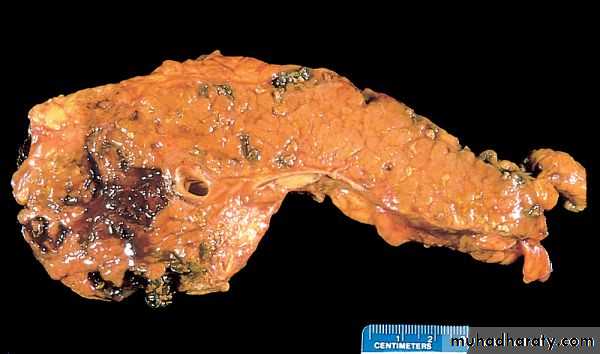 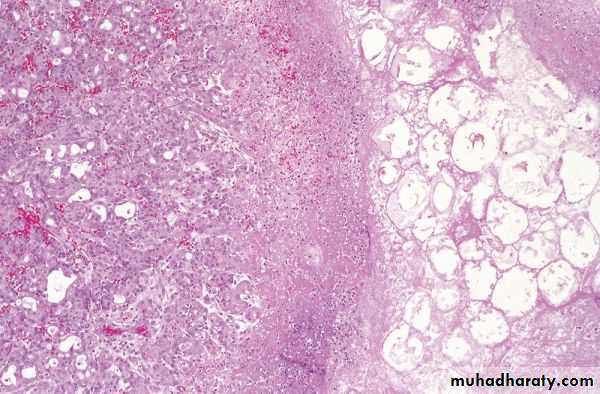 Pancreatic Pseudocyst is the most common cystic lesion of the pancreas and a common complication of acute pancreatitis. Liquefied necrotic pancreatic tissues become surrounded by fibrous tissue wall to form a cystic space, lacking an epithelial lining ("pseudo"). Drainage of pancreatic secretions into this space over months to years (from damaged pancreatic ducts) can cause massive enlargement of the cyst (up to 30 cm in diameter). They can become secondarily infected, and larger pseudocysts can compress or even perforate into adjacent structures. It is commonly attached to the surface of the gland and may involve peripancreatic tissues.

• Chronic Pancreatitis is characterized by longstanding inflammation and fibrosis with destruction of the exocrine pancreas; in the late stages, the islets are also lost.
• Causes of chronic pancreatitis include
• Chronic alcoholism (the most common cause).
• Long-standing pancreatic duct obstruction (e.g., by pseudocysts, calculi, neoplasms)
• Tropical pancreatitis: seen in Africa and Asia, and attributed to malnutrition
• Hereditary pancreatitis due to mutations of genes, some encoding trypsin inhibitor.
• Cystic fibrosis
• In some cases there is no obvious cause (idiopathic)

Gross features: the gland is hard, sometimes with extremely dilated ducts and visible calcifications
Microscopic features
Parenchymal fibrosis, reduced number and size of acini, and variable dilation of the ducts.
A chronic inflammatory infiltrate around remaining lobules and ducts.
Islets of Langerhans are relatively spared but eventually they disappear.

Cystic Neoplasms
Some of these are entirely benign (e.g., serous cystadenoma); others, such as mucinous cystic neoplasms, can be benign but frequently have malignant potential. 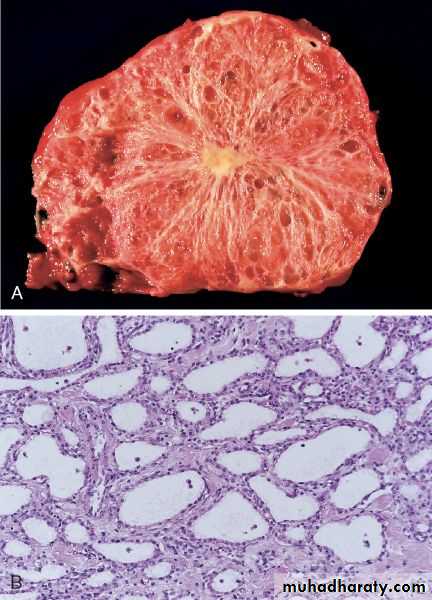 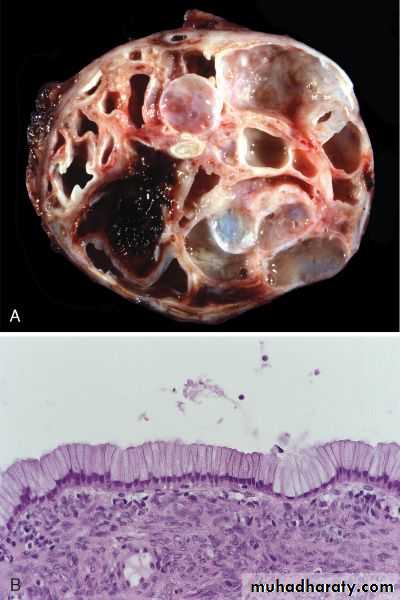 Pancreatic Carcinoma has a very poor prognosis in that the 5-year survival rate is less than 5%.
Pathogenesis: like all cancers, it arises as a consequence of inherited and acquired mutations in cancer-associated genes.
Antecedent lesions are called "pancreatic intraepithelial neoplasias" (PanINs). They are often found adjacent to infiltrating carcinomas and share with the latter a number of the same genetic mutations. The more common molecular alterations in pancreatic carcinogenesis affect K-RAS (oncogene), and the tumor suppressor genes p16, SMAD4, and p53.
Carcinoma is primarily a disease of the elderly (60 and 80 years). Smoking has the strongest environmental influence. Chronic pancreatitis and diabetes mellitus are also associated with an increased risk. Familial clustering of pancreatic cancer has been reported, and familial pancreatitis (related to mutations in a trypsinogen gene) is associated with up to 80-fold increased risk.

Most carcinomas are ductal adenocarcinomas .
Two features are characteristic of pancreatic cancer:
1. It is highly invasive; even in the early stages, thus infiltrates peripancreatic tissues extensively
2. It elicits an intense fibroblastic (desmoplastic) response.
Perineural and lymphatic invasions are commonly seen.
Migratory thrombophlebitis (Trousseau syndrome) occurs in about 10% of patients. Endoscopic ultrasonography and CT, are helpful in diagnosis and in performing guided percutaneous needle biopsy. 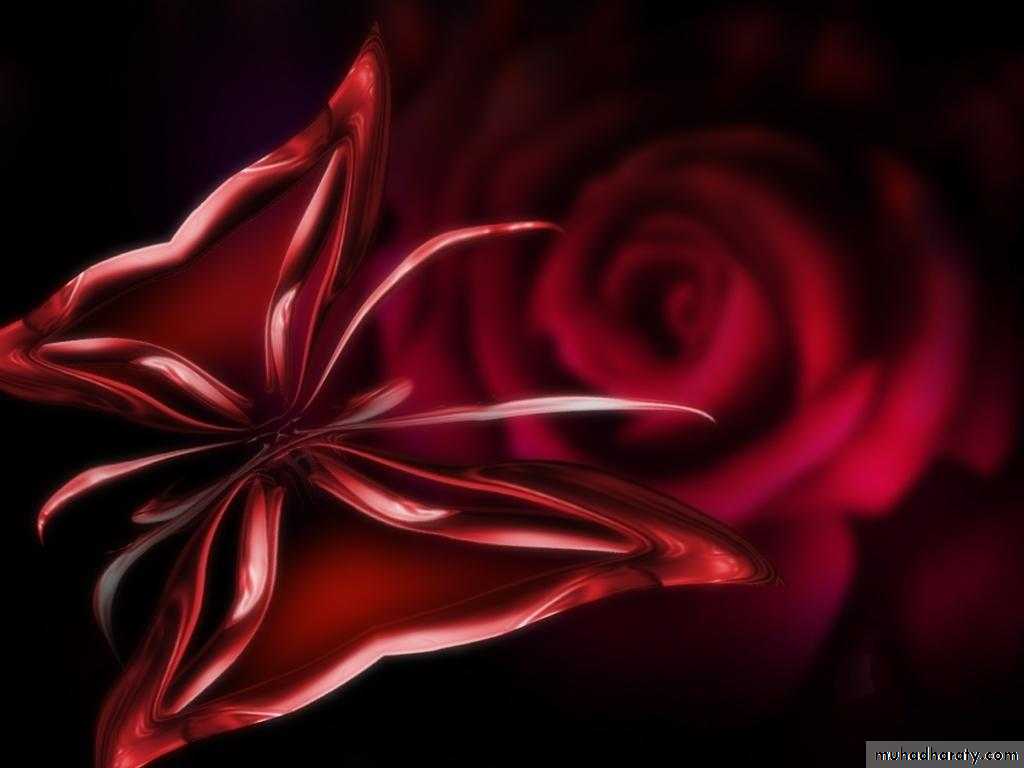