• A. Cholelithiasis and Cholecystitis 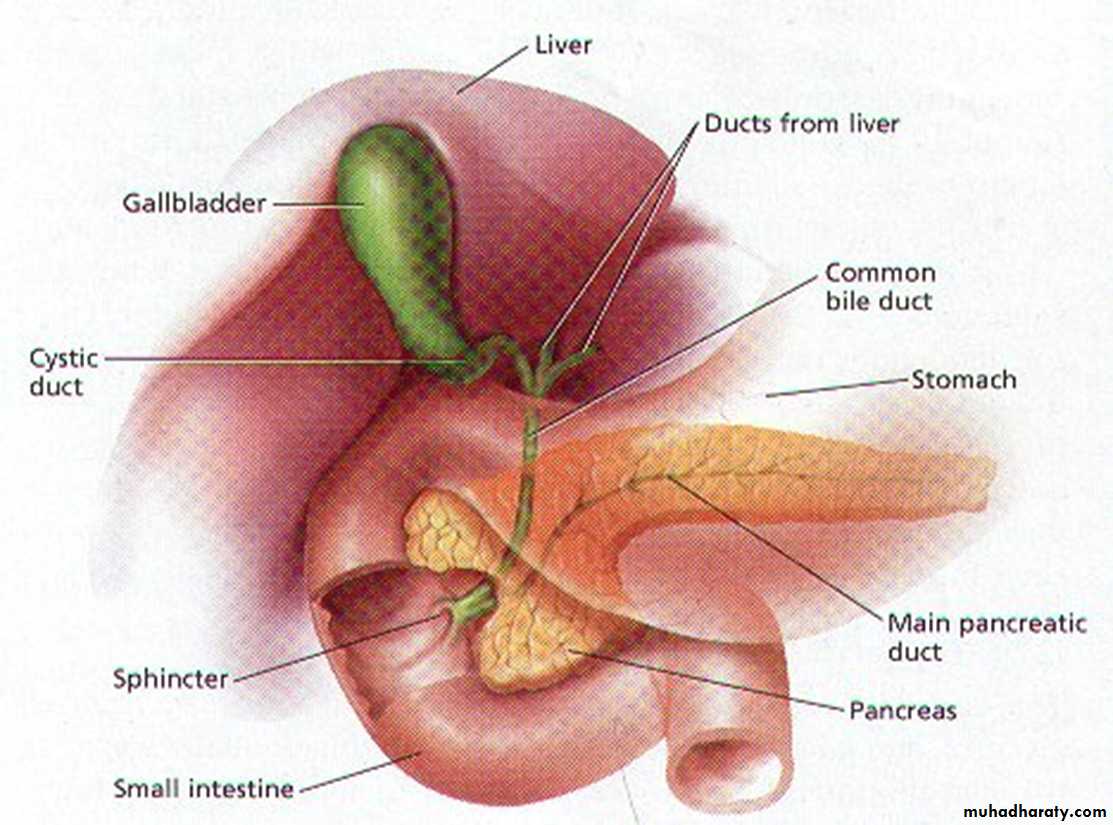 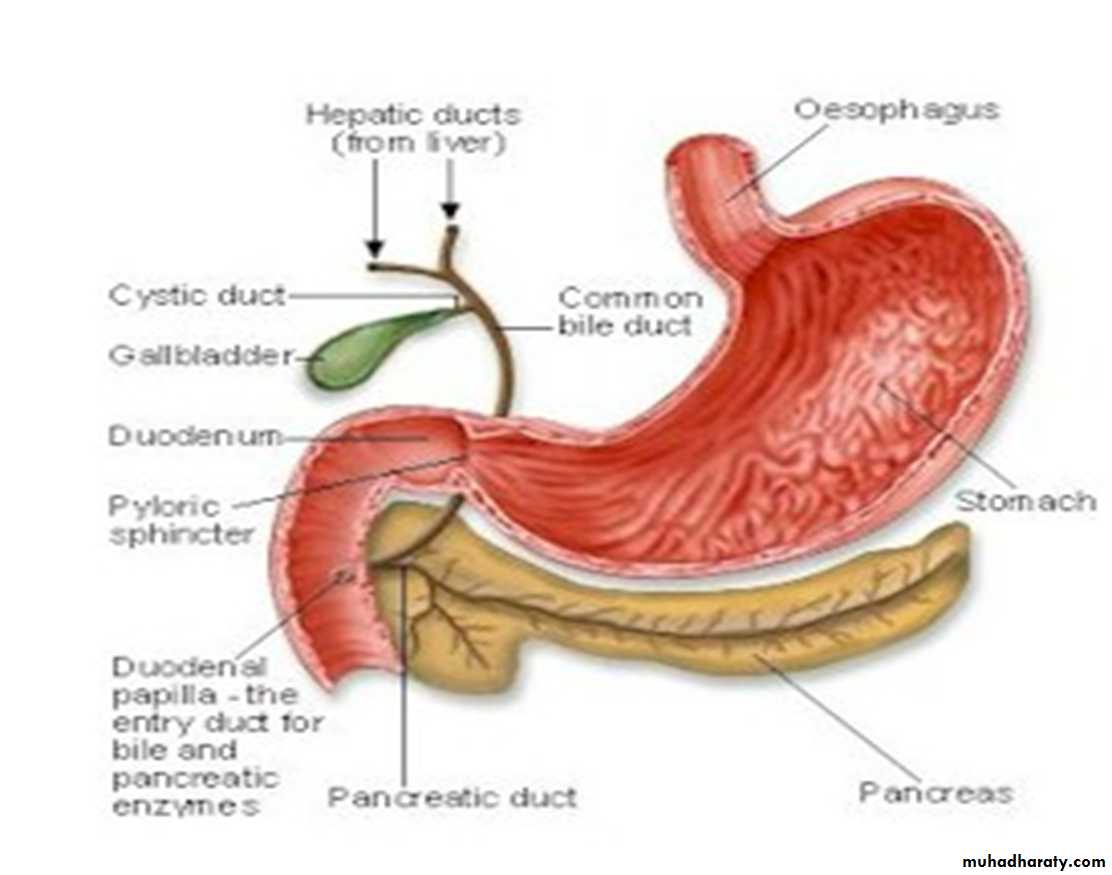 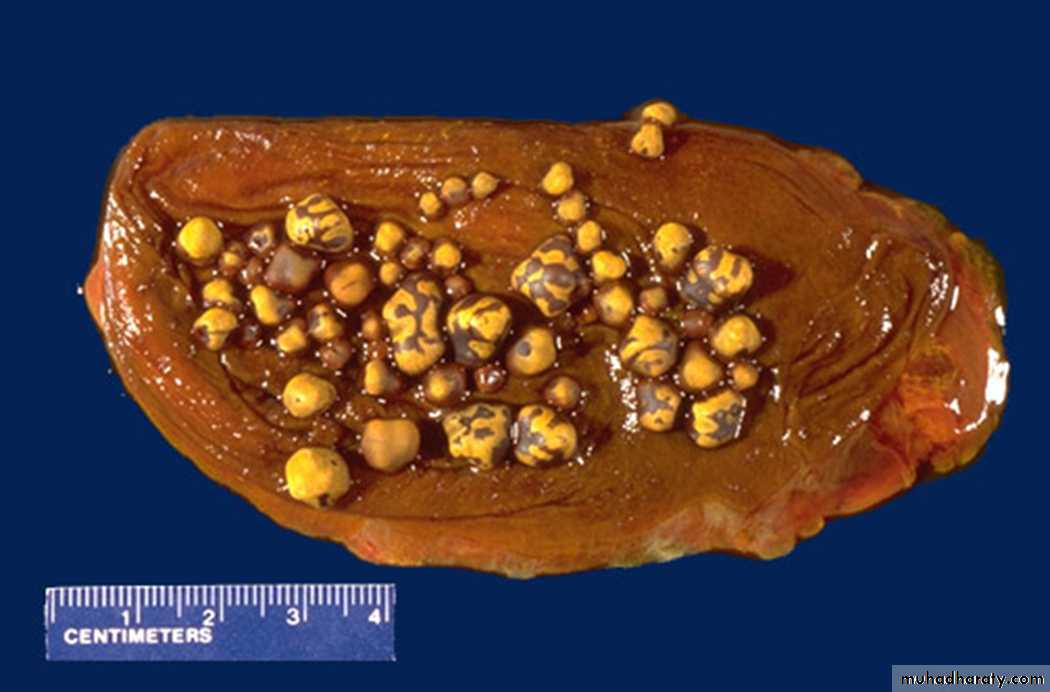 Gallbladder Disorders
b. Most gallstones are composed primarily of bile (80%); remainder are composed of a mixture of bile components
c. Excess cholesterol in bile is associated with obesity, high-cholesterol diet and drugs that lower cholesterol levels
d. If stones from gallbladder lodge in the cystic duct
1. There can be reflux of bile into the gallbladder and liver
2. Gallbladder has increased pressure leading to ischemia and inflammation
3. Severe ischemia can lead to necrosis of the gall bladder
4. If the common bile duct is obstructed, pancreatitis can develop 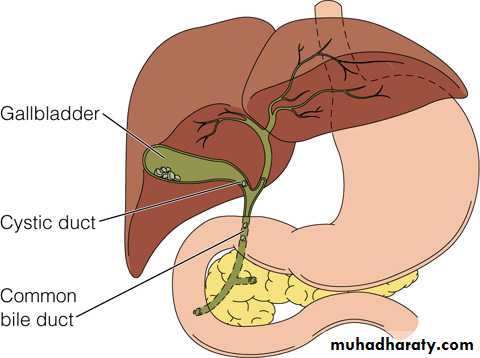 Manifestations of cholelithiasis
a. Many persons are asymptomatic
b. Early symptoms are epigastic fullness after meals or mild distress after eating a fatty meal
c. Biliary colic (if stone is blocking cystic or common bile duct): steady pain in epigastric or RUQ of abdomen lasting up to 5 hours with nausea and vomiting
d. Jaundice may occur if there is obstruction of common bile duct

Manifestations of acute cholecystitis
a. Episode of biliary colic involving RUQ pain radiating to back, right scapula, or shoulder; the pain may be aggravated by movement, or deep breathing and may last 12 – 18 hours
b. Anorexia, nausea, and vomiting
c. Fever with chills

• The changes are extremely variable and sometimes minimal.
• The mere presence of stones within the gallbladder, even in the absence of acute inflammation, is often taken as sufficient justification for the diagnosis.
• The gallbladder may be contracted, of normal size, or enlarged.
• The muscular layer and subserosa are often thickened from fibrosis.
• In the absence of superimposed acute cholecystitis, mural lymphocytes are the only feature of inflammation. 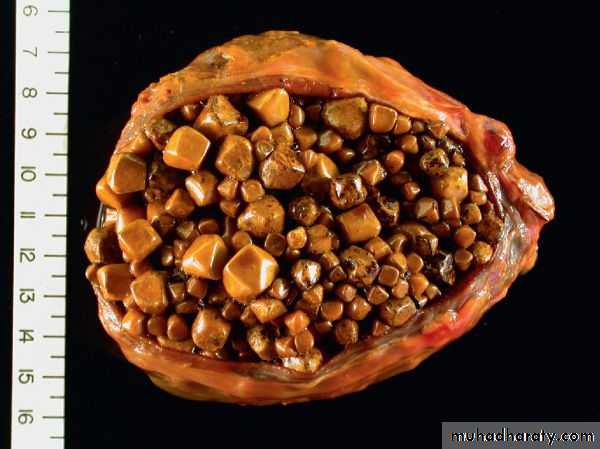 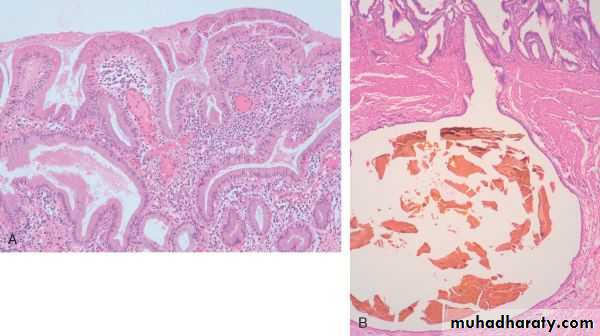 • Choledocholithiasis and Cholangitis are frequently seen together. Choledocholithiasis is the presence of stones within the biliary tree. Almost all these stones are derived from thAe gallbladder. Symptoms are absent in 10% of the cases, but when occur they are due to biliary obstruction or its sequele such as pancreatitis, cholangitis, hepatic abscess, secondary biliary cirrhosis, or acute calculous cholecystitis.

• Cholangitis refers to acute mostly bacterial inflammation of the wall of bile ducts. Most cases are due to obstruction bile flow, mostly by choledocholithiasis. However, surgical reconstruction of the biliary tree is also a recognized cause. Uncommon causes include tumors, indwelling stents or catheters, acute pancreatitis, and benign strictures. Bacteria most likely enter the biliary tract through the sphincter of Oddi, rather than by the hematogenous route.
• Ascending cholangitis refers to the tendency of bacteria, once within the biliary tree, to infect intrahepatic biliary ducts. The usual pathogens are E. coli, Klebsiella, Clostridium, Bacteroides, etc.
• Charcot's triad (pain, jaundice and fever) is the most common mode of presentation.
• The most severe form of cholangitis is suppurative cholangitis, in which purulent bile fills and distends bile ducts, with an attendant risk of liver abscess formation.

Carcinoma of the Gallbladder is the most frequent malignant tumor of the biliary tract. It occurs most frequently in the age group 60-70 years. The mean 5-year survival is 5% because it is rarely discovered at a resectable stage.

• The cancer is either exophytic (fungating) or infiltrative growth.
• The infiltrative pattern, which is the more common, usually appears as a poorly-defined area of thickening and induration of part or whole of gall bladder wall.
• The exophytic pattern grows into the lumen as cauliflower mass, but at the same time it invades the underlying wall .
• Microscopic features
• Well- to poorly-differentiated infiltrative adenocarcinomas that is sometimes papillary.
• By the time gallbladder cancers are discovered, most have invaded the liver directly and many have extended to the cystic duct and adjacent bile ducts and lymph nodes at the portahepatis. 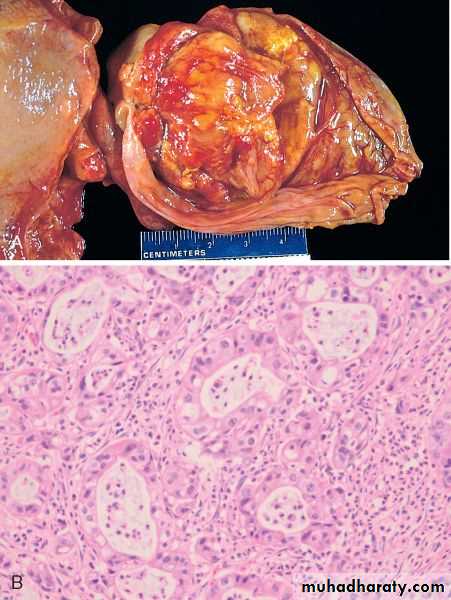 • Cholangiocarcinomas are adenocarcinomas arising from cholangiocytes (epithelial cells lining) in bile ducts within and outside of the liver. Extrahepatic cholangiocarcinomas (2/3 of the cases) may develop at the hilum (Klatskin tumors) or more distally in the biliary tree, down to the peripancreatic portion of the distal common bile duct. They occur mostly in individuals 50 to 70 years of age. The prognosis of cholangiocarcinomas is poor because they are generally asymptomatic until late, and most patients have unresectable tumors.
• Risk factors include
• 1. Primary sclerosing cholangitis
• 2. Fibrocystic diseases of the biliary tree
• 3. Exposure to Thorotrast (which is no longer used in radiography of the biliary tree).
• Pathological features
• Due to early development of obstructive jaundice, these tumors are detected as small firm, gray nodules within the bile duct wall. Alternatively, they are diffusely infiltrative lesions that create thickening of the wall.
• These adenocarcinomas are generally well-differentiated with an abundant fibrous stroma
• Cholangiocarcinomas may spread to extrahepatic sites such as regional lymph nodes, lungs, & bones.
• Mean survival time is around 12 months.

• Next lecture / Disorders of pancreas 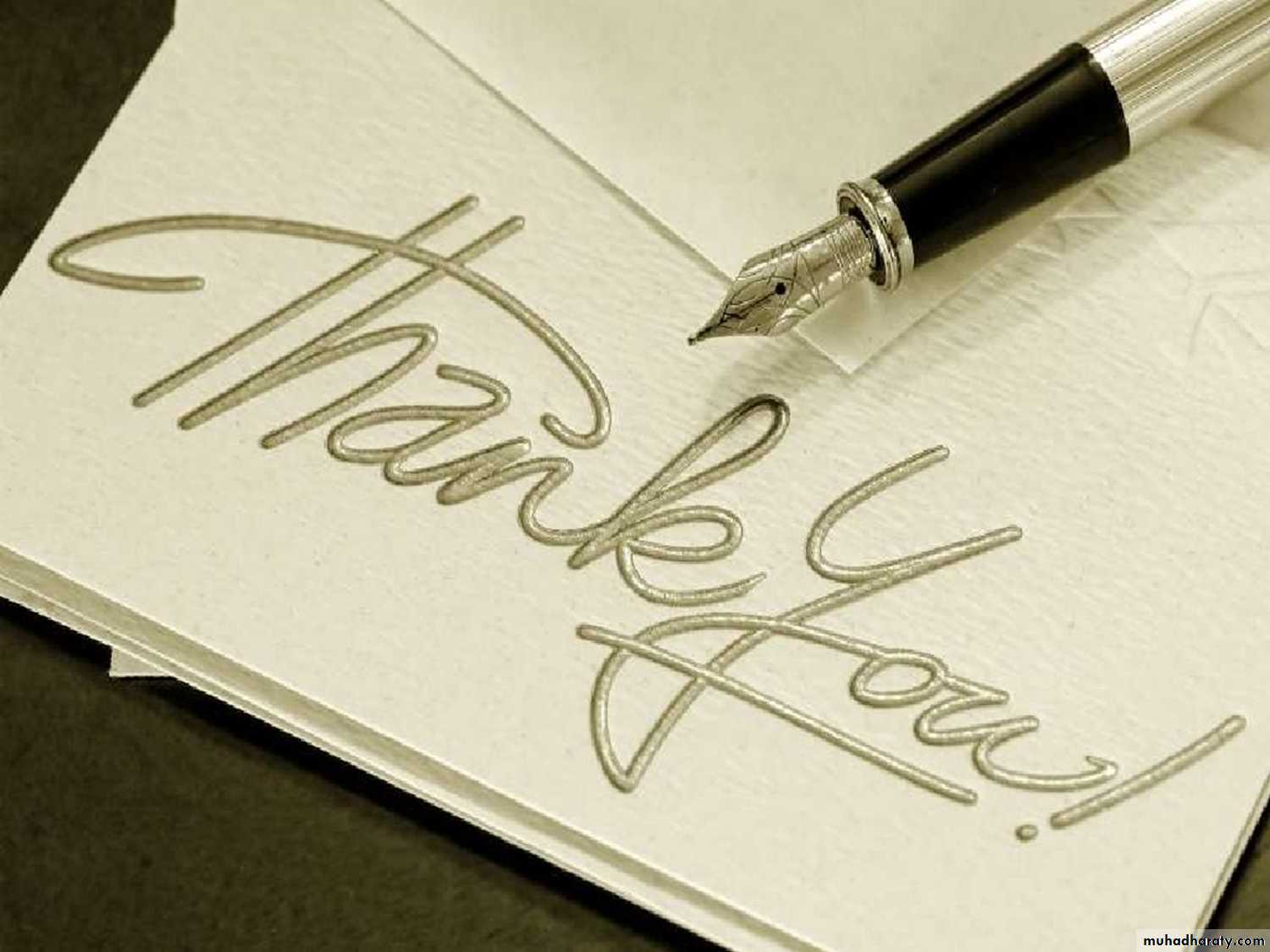