Pathology of the small and large intestine

Abdominal Hernia
Any weakness or defect in the wall of the peritoneal cavity may permit protrusion of a serosa-lined pouch of peritoneum called a hernia sac.
Acquired hernias most commonly occur anteriorly, through the inguinal and femoral canals or umbilicus, or at sites of surgical scars. These are of concern because of visceral protrusion (external herniation).

It tend to have narrow orifices and large sacs. Small bowel loops are herniated most often, but portions of omentum or large bowel also protrude, and any of these may become entrapped.
Pressure at the neck of the pouch may impair venous drainage, leading to stasis and edema. These changes increase the bulk of the herniated loop, leading to permanent entrapment and over time, arterial and venous compromise, or strangulation, can result in infarction.

The greater portion of the gastrointestinal tract is supplied by the celiac, superior mesenteric, and inferior mesenteric arteries.
As they approach the intestinal wall, the superior and inferior mesenteric arteries fan out to form the mesenteric arcades.
Interconnections between arcades, as well as collateral supplies from the proximal celiac and distal pudendal and iliac circulations, make it possible for the small intestine and colon to tolerate slowly progressive loss of the blood supply from one artery.
By contrast, acute compromise of any major vessel can lead to infarction of several meters of intestine.

Intestinal responses to ischemia occur in two phases.
The initial hypoxic injury occurs at the onset of vascular compromise and, although some damage occurs, intestinal epithelial cells are relatively resistant to transient hypoxia.
The second phase, reperfusion injury, is initiated by restoration of the blood supply and associated with the greatest damage. In severe cases multiorgan failure may occur. While the underlying mechanisms of reperfusion injury are incompletely understood, they involve free radical production, neutrophil infiltration, and release of inflammatory mediators, such as complement proteins and cytokines.

The severity of vascular compromise, time frame during which it develops, and vessels affected are the major variables that determine severity of ischemic bowel disease.

Tumors of the small and large intestine:

Polyps are most common in the colon but may occur in the esophagus, stomach, or small intestine.
sessile, grow directly from the stem without a stalk.
pedunculated Polyps with stalks.
Intestinal polyps can be classified as non-neoplastic or neoplastic in nature.

The most common neoplastic polyp is the adenoma, which has the potential to progress to cancer.
The non-neoplastic polyps can be classified as inflammatory, hamartomatous, or hyperplastic.

Solitary rectal ulcer syndrome.
Patients present with a clinical triad of rectal bleeding, mucus discharge, and an inflammatory lesion of the anterior rectal wall.
The underlying cause is impaired relaxation of the anorectal sphincter that creates a sharp angle at the anterior rectal shelf and leads to recurrent abrasion and ulceration of the overlying rectal mucosa. An inflammatory polyp may ultimately form as a result of chronic cycles of injury and healing.
Entrapment of this polyp in the fecal stream leads to mucosal prolapse.
Histologic features:
Inflammatory polyp with superimposed mucosal prolapse and include lamina propria fibromuscular hyperplasia, mixed inflammatory infiltrates, erosion, and epithelial hyperplasia. 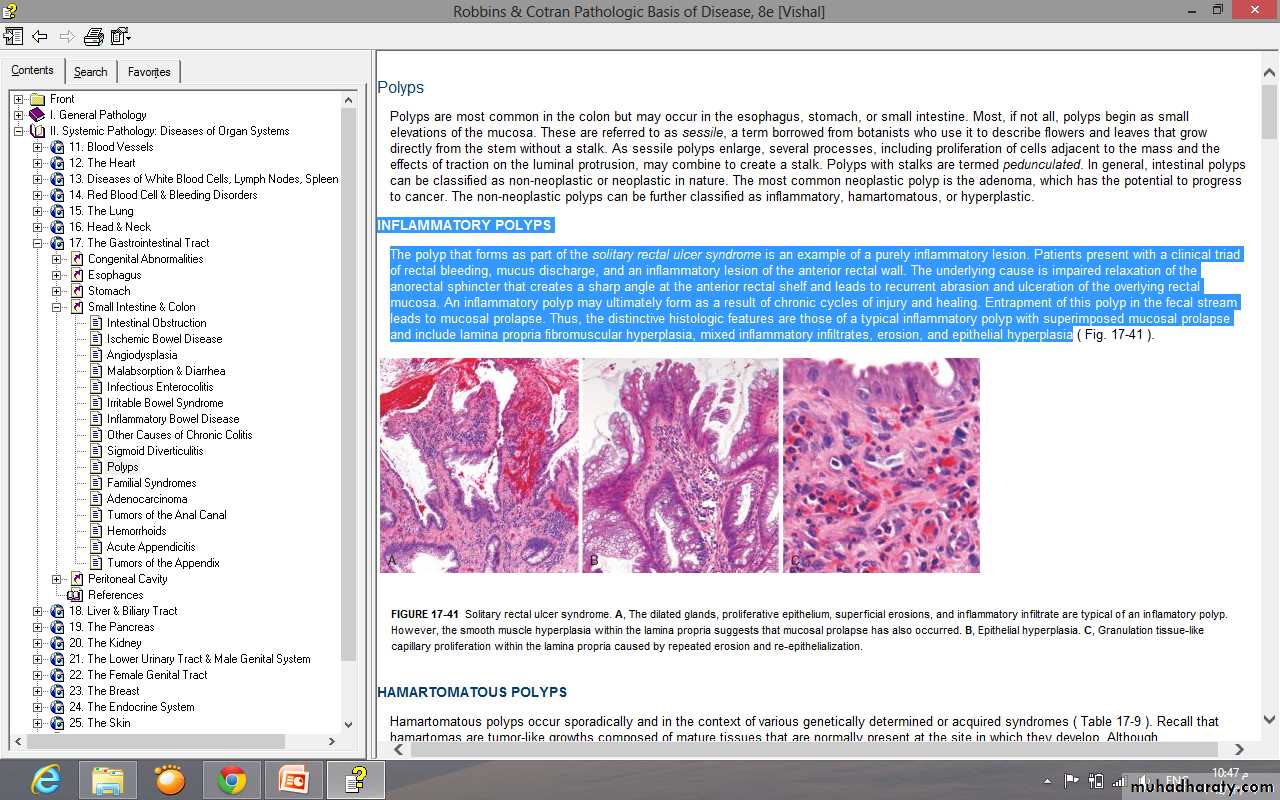 A, The dilated glands, proliferative epithelium, superficial erosions, and inflammatory infiltrate are typical of an inflamatory polyp.The smooth muscle hyperplasia within the lamina propria suggests that mucosal prolapse has also occurred.
B, Epithelial hyperplasia.
C, Granulation tissue-like capillary proliferation within the lamina propria caused by repeated erosion and re-epithelialization

It’s occur sporadically and in the context of various genetically determined or acquired syndromes.
Hamartomas are tumor-like growths composed of mature tissues that are normally present at the site in which they develop.
Hamartomatous polyposis syndromes are rare, they are important to recognize because of associated intestinal and extra-intestinal manifestations and the possibility that other family members are affected.

Common epithelial proliferations.
Discovered in the sixth and seventh decades of life.
Pathogenesis of hyperplastic polyps is incompletely understood, but they are thought to result from decreased epithelial cell turnover and delayed shedding of surface epithelial cells, leading to a “piling up” of goblet cells and absorptive cells.
These lesions are without malignant potential.
they must be distinguished from sessile serrated adenomas, histologically similar lesions that have malignant potential.
It is also important to remember that epithelial hyperplasia can occur as a nonspecific reaction adjacent to or overlying any mass or inflammatory lesion and, therefore, can be a clue to the presence of an adjacent, clinically important lesion.

Gross:
Hyperplastic polyps are most commonly found in the left colon and are typically less than 5 mm in diameter.
They are smooth, nodular protrusions of the mucosa, often on the crests of mucosal folds.
Single or multiple, particularly in the sigmoid colon and rectum.
Microscopically:
Hyperplastic polyps are composed of mature goblet and absorptive cells.
The delayed shedding of these cells leads to crowding that creates the serrated surface architecture that is the morphologic hallmark of these lesions.

Risk of malignancy related to size, histologic type, and dysplasia

Since they are considered premalignant, all should be removed. 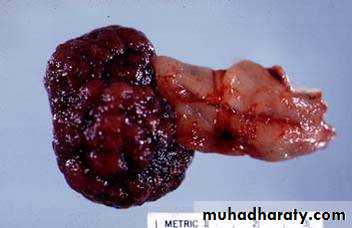 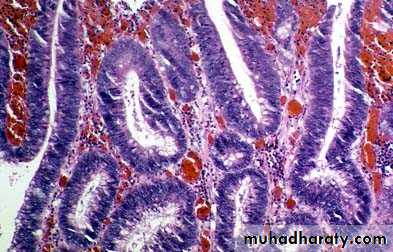 Molecular model for the evolution of colorectal cancers through the adenoma-carcinoma sequence.
Although APC mutation is an early event and loss of p53 occurs late in the process of tumorigenesis, the timing for the other changes may be variable.
Note: individual tumors may not have all of the changes listed.
Top right, cells that gain oncogene signaling without loss of p53 eventually enter oncogene-induced senescence 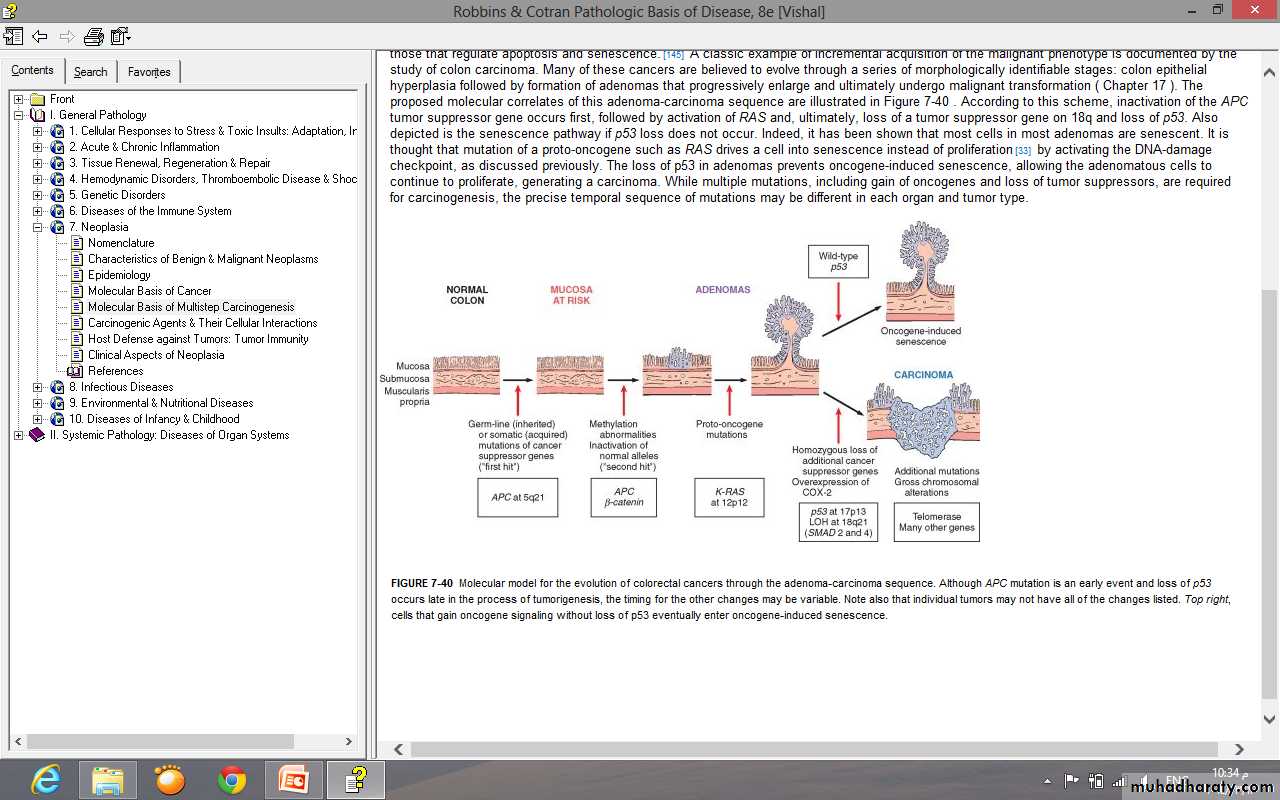 • Gross:
• Site: 25% in the cecum &ascending colon, 25% in the descending colon and proximal sigmoid, the remaining scattered elsewhere.
• Polypoid growth in the proximal.
• Annual encirculing lesion in distal colon.
• Microscopically: 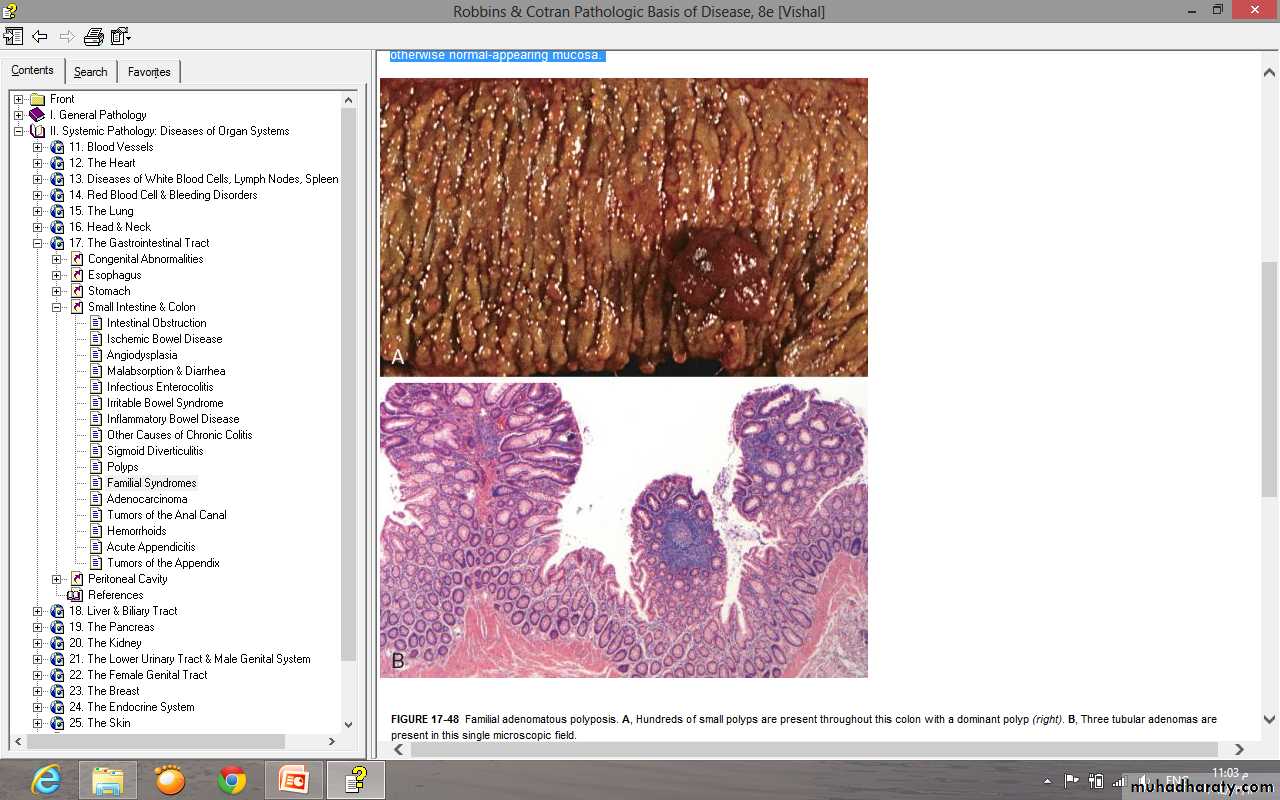 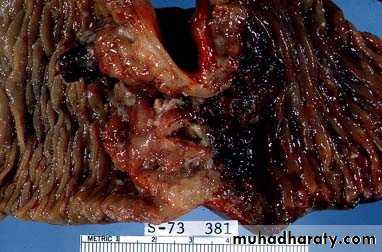 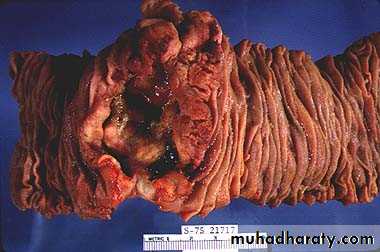 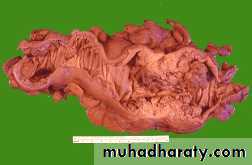 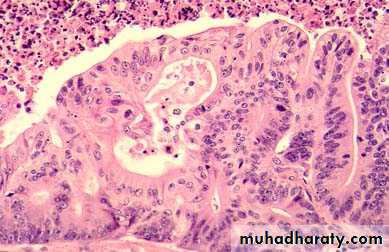 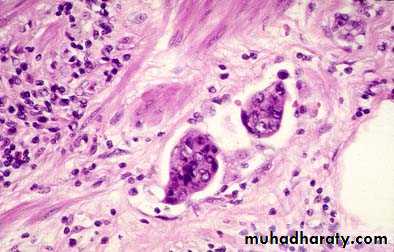 Carcinoid tumor of the appendix 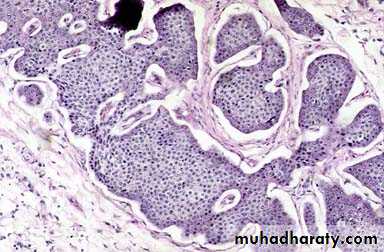 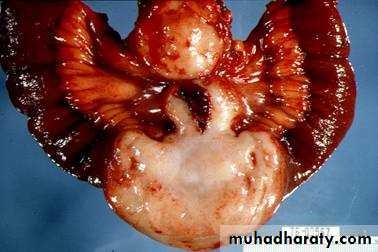 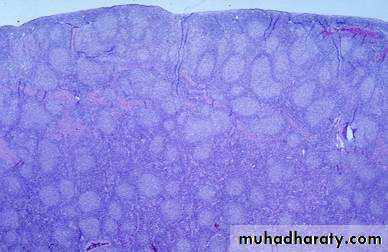 GIST
Approximately 75% to 80% of all GISTs have oncogenic, gain-of-function mutations of the gene encoding the tyrosine kinase c-KIT, which is the receptor for stem cell factor. Another 8% of GISTs have mutations that activate a related tyrosine kinase, platelet-derived growth factor receptor A (PDGFRA); thus activating mutations in tyrosine kinases are found in virtually all GISTs. However, either mutation is sufficient for tumorigenesis, and c-KIT and PDGFRA mutations are almost never found in a single tumor.
GISTs appear to arise from, or share a common stem cell with, the interstitial cells of Cajal, which express c-KIT, are located in the muscularis propria, and serve as pacemaker cells for gut peristalsis.

Primary gastric GISTs usually form a solitary, well circumscribed,
fleshy, submucosal mass. Metastases may form multiple small serosal nodules or fewer large nodules in the liver; spread outside of the abdomen is uncommon.
GISTs can be composed of thin, elongated spindle cells or plumper epithelioid cells. The most useful diagnostic marker is c-KIT, consistent with the relationship between GISTs and interstitial cells of Cajal, which is immunohistochemically detectable in 95% of these tumors.

Symptoms of GISTs at presentation may be related to mass effects or mucosal ulceration. Complete surgical resection is the primary treatment for localized gastric GIST.
The prognosis correlates with tumor size, mitotic index, and location, with gastric GISTs being somewhat less aggressive than those arising in the small intestine. Recurrence or metastasis is rare for gastric GISTs less than 5 cm across but common for mitotically active tumors larger than 10 cm.