The Esophagus
• Congenital anomalies
• Atresias :“a thin, noncanalized cord replaces a segment of esophagus, causing a mechanical obstruction” with a proximal blind pouch connected to the pharynx and a lower pouch connected to the stomach.
• Fistula:
• Esophagus connects with the bronchus or trachea.
Fistulae can lead to aspiration, suffocation, pneumonia, and severe fluid and electrolyte imbalances.
• Stenosis, webs, rings:

Diaphragmatic hernia occurs when incomplete formation of the diaphragm allows the abdominal viscera to herniate into the thoracic cavity.
When severe, the space-filling effect of the displaced viscera can cause pulmonary hypoplasia that is incompatible with life after birth.
Omphalocele occurs when closure of the abdominal musculature is incomplete and the abdominal viscera herniate into a ventral membranous sac. This may be repaired surgically, but as many as 40% of infants with an omphalocele have other birth defects, including diaphragmatic hernia and cardiac anomalies.
Gastroschisis is another ventral wall defect similar to omphalocele except that it involves all of the layers of the abdominal wall, from the peritoneum to the skin.

Ectopic tissues (developmental rests) are common in the GI tract. The most frequent site of ectopic gastric mucosa is the upper third of the esophagus, where it is referred to as an inlet patch. While generally asymptomatic, acid released by gastric mucosa within the esophagus can result in dysphagia, esophagitis, Barrett esophagus, or, rarely, adenocarcinoma.
Ectopic pancreatic tissue occurs less frequently and can be found in the esophagus or stomach. Like inlet patches, these nodules are most often asymptomatic but can produce damage and local inflammation.

• Achalasia:
dilatation of the esophagus above the LES.
wall may be of normal or increased thickness.
may be primary or secondary to diabetic neuropathy, malignancy, Chagas disease or amyloidosis

There are three major abnormalities:
A peristalsis.
Partial relaxation of LES with swallowing.
Increased LES pressure.
Microscopically:
Myenteric ganglia are absent from the body
of esophagus.

• Complications of achalasia include:

• Severe dysphagia
• Nocturnal regurgitation and aspiration.
• 5% of patients it may be complicated by the development of squamous cell carcinoma.

• acquired herniation of the stomach due to widening of the space between the muscular crura of the diaphragm and the esophageal wall.
• herniation may be axial (sliding) or non-axial (paraesophageal).
• sliding hernia – herniation of the esophagogastric junction through the hiatus into the thorax ; sliding – most common (95%)
• paraesophageal through hiatus alongside esophagus (esophagogastric junction remains in the abdomen)

• Hernias may be found in up to 20% of adult subjects (asymptomatic).

• Infants and children may also have hiatal hernias
• complications :
• Bleeding and perforation
• Strangulation or obstruction may complicate paraesophageal hernias

• Reflux esophagitis is due to reflux of gastric contents.
• Causes:
• Associated with an altered LES tone ( CNS depressants, hypothyroidism, pregnancy, alcohol or tobacco exposure)
• Hiatal hernia as well as delayed gastric emptying may also play a role.
• Inflammation is due to acid peptic action upon the mucosa.

Low-power view of the superficial portion of the mucosa. Numerous eosinophils within the squamous epithelium, elongation of the lamina propria papillae, and basal zone hyperplasia are present.

1. Seen as red, velvety mucosa located between the pale, white squamous mucosa.
2. It may be in small tongues or patches extending up from the GE junction or displacing in a broad fashion the squamo-columnar junction upwards.
3. The small tongue or patches are called short segment Barrett mucosa.

Dysplastic changes may occur during the course of Barrett mucosa, consisting of enlarged, crowded and stratified nuclei.
Two types of dysplasia are recognized:
1. Low grade, with basal orientation of nuclei.
• 2. High grade with nuclei reaching the apex of the epithelial cells.
Adenocarcinoma may occur in both short and long segment Barrett mucosa.

The ingestion of mucosal irritants may cause inflammation of the esophagus; e.g. corrosive acids or alkali, hot fluids, alcohol, heavy smoking.
Other causes of esophagitis include cytotoxic anticancer therapy, infection after bacteremia or viremia.
In immunosuppressed patients herpes simplex and cytomegalovirus (CMV) are the most common organisms; in debilitated patients fungal infections e.g. candida, may occur.

Caused by portal hypertension, mainly due to cirrhosis of the liver.

Collaterals develop in the lower esophagus, eventually becoming tortuous, protruding into the lumen mucosa may be inflamed and eroded.

Varicosal dilatation may lead to rupture, with massive hemorrhage as a severe complication.

In patients with cirrhosis, ruptured varices may lead to death in 40% of patients in the first episode of bleeding.

The most common benign tumors are of smooth muscle origin, called leiomyomas.

• Occur in adults over the age of 50 years.
• Male – female ratio from 2:1 to 20:1
• Worldwide in distribution but the incidence varies according to different regions.
• High incidence areas include Central Asia, Northern China, Puerto Rico and Eastern Europe, where it may exceed 100 per 100,000.
• Blacks are at higher risk than are whites.

• Dietary and environmental factors are described as major risk factors.
• Genetic predisposition is thought to play a minor role.
• Alcohol and tobacco usage are main factors in the US and Europe.
• In other parts of the world, carcinogens such as fungus contaminated and nitrosamines in foodstuffs play a major role in China and South Africa.
• Human papilloma virus DNA is found in tumors from high incidence regions.

More than half of cancers have p53 mutations.

Also p16 and allelic loss, indicating stepwise accumulation of genetic alterations.
There are, however, no K-ras or APC gene mutations identified in squamous cell carcinomas

20% of tumors are located in the upper third of the esophagus, 50% in the middle third, 30% in the lower third.
Tumors appear as exophytic polypoid lesions in 60% of cases; flat in 10% and excavated-necrotic
ulceration in 25% of cases
May erode into the respiratory tree or aorta, invade the mediastinum and pericardium.
Rarely it is superficial, confined to the epithelial layer or submucosa.
Usually well differentiated. 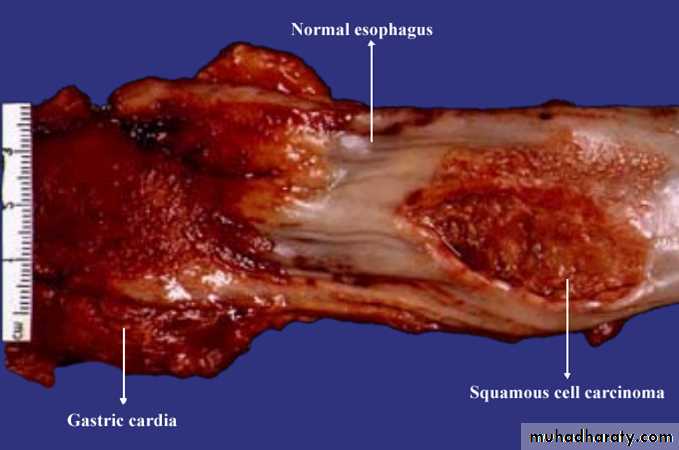 Up to half of all esophageal cancers are adenocarcinomas, in association with Barrett esophagus.
Alterations include overexpression of p53 and allelic losses in 17p.
The tumors are usually in the distal esophagus, may invade the cardia and grow to be large nodular masses.

They are mucin producing, occasionally with Signet ring types.

Adenocarcinomas are more common in men than women, more frequent in white than black males.
Symptoms are similar to those in squamous cell carcinomas.
Prognosis is poor, with 30% 5 year survival
Cancers limited to mucosa and submucosa have a 5-year survival of 80% 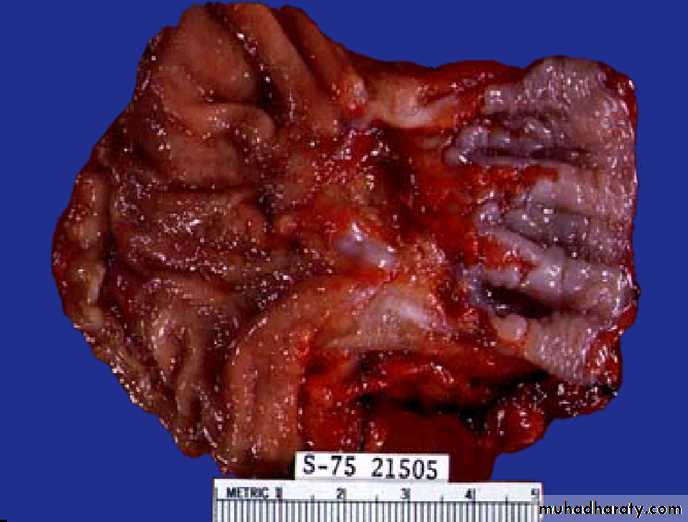