outpouchings of the colonic mucosa and submucosa.
Rare in individuals younger than 30 years of age, but the prevalence approaches 50% in Western adult populations older than 60 years of age.
Diverticula generally are multiple, and the condition is referred to as diverticulosis.
This disease is much less common in developing countries, probably because of dietary differences.

Elevated intraluminal pressure in the sigmoid colon.
Morphology
Small, flask like outpouchings, usually 0.5 to 1 cm in diameter, regular distribution in between the taeniae coli.
Thin wall composed of a flattened or atrophic mucosa, compressed submucosa, and attenuated muscularis propria.
Complication
Obstruction of diverticula with stasis of contents, leads to inflammatory changes, producing diverticulitis and peridiverticulitis.
perforation can occur due to increased pressure and mucosal ucleration within an obstructed diverticulum.

Molecular linkage analyses of affected families have identified NOD2 (nucleotide oligomerization binding domain 2) as a susceptibility gene in Crohn disease.
Specific NOD2 polymorphisms confer at least a four-fold increase in Crohn disease risk among Caucasians of European ancestry.
NOD2 encodes a protein that binds to intracellular bacterial peptidoglycans and subsequently activates NF-κB “transcription factors”.
It has been postulated that disease-associated NOD2 variants are less effective at recognizing and combating luminal microbes, which are then able to enter the lamina propria and trigger inflammatory reactions. Other data suggest that NOD2 may regulate immune responses to prevent excessive activation by luminal microbes.

Although the mechanisms by which mucosal immunity contributes to ulcerative colitis and Crohn disease pathogenesis are still being obscured, immunosuppression remains the mainstay of IBD therapy.
Polarization of helper T cells to the TH1 type is well-recognized in Crohn disease, and emerging data suggest that TH17 T cells also contribute to disease pathogenesis. Consistent with this, certain polymorphisms of the IL-23 receptor confer protection from Crohn disease and ulcerative colitis.

A variety of epithelial defects have been described in both Crohn disease and ulcerative colitis. For example, defects in intestinal epithelial tight junction barrier function are present in Crohn disease patients and a subset of their healthy first-degree relatives

The abundance of microbiota in the GI lumen is overwhelming, amounting to as much as 1012 organisms per milliliter in the colon and 50% of fecal mass.
In total, these organisms greatly outnumber human cells in our bodies, meaning that, at a cellular level, we are only about 10% human.
Although the composition of this dense microbial population tends to be stable within individuals over at least several years, it can be modified by diet and there is significant variation between individuals. In addition to the luminal microbiota, the more limited microbial population that inhabits the intestinal mucous layer may have the greatest impact on health. 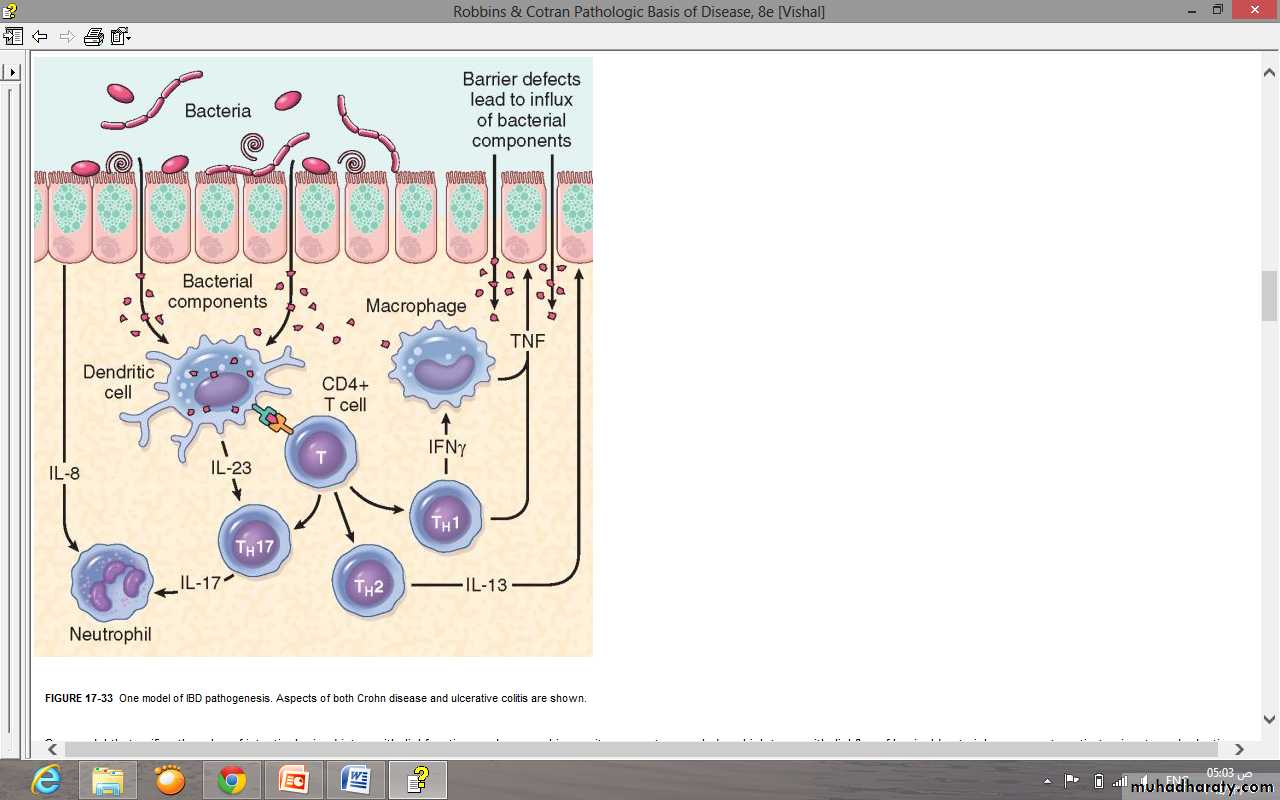 One model of IBD pathogenesis. Aspects of both Crohn disease and ulcerative colitis are shown.

Colitis associated neoplasia
• There is a tendency for dysplasia to arise in multiple sites.
• The underlying inflammatory disease may mask the symptoms and signs of carcinoma.
• UC is characterized by DNA damage with microsatellite instability in mucosal cells. More recently, genomic instability was detected in non-dysplastic areas of patients with UC, suggesting that these patients have DNA repair deficiency and genomic instability throughout the intestinal tract.