Associate Prof. Dr. Jawad Al-Musawi
I. Overview
Prostaglandins, histamine, and serotonin belong to a group of compounds called autacoids. These heterogeneous substances have widely differing structures and pharmacologic activities. They all have the common feature of
being formed by the tissues on which they act; thus, they function as local hormones. [Note: The word autacoids comes from the Greek: autos (self) and akos (medicinal agent, or remedy).] The autacoids also differ from circulating hormones in that they are produced by many tissues rather than in specific endocrine glands. The drugs described in this lecture are either autacoids or autacoid antagonists (compounds that inhibit the synthesis of certain autacoids or that interfere with their interactions with receptors).
II. Prostaglandins
Prostaglandins are unsaturated fatty acid derivatives that act on the tissues in which they are synthesized and are rapidly metabolized to inactive products at the site of action.
A. Therapeutic uses of prostaglandins
Systemic administration of prostaglandins evokes a bewildering( مربك) array(نرتيب) of effects a fact that limits the therapeutic usefulness of these agents.
1-Abortion and induce of laboure: Several of the prostaglandins find use as abortifacients (agents causing abortions). The most effective option available involves oral administration mifepristone [mi-FEP-ri-stone], (a synthetic steroid with antiprogestational effects) followed at least 24 hours later by the synthetic prostaglandin E1 analog misoprostol
[mye-so-PROST-ole] administered vaginally . Women can self-administer this regimen with complete abortion rates exceeding 95 percent. The overall case-fatality rate for abortion is less than one death per 100,000 procedures. Infection, hemorrhage, and retained tissue are among the more common complications.
So the Effect on uterus: Prostaglandin F2α (PGF2α in prostanoid nomenclature), pharmaceutically termed dinoprost (INN), is a naturally occurring prostaglandin used in medicine to induce labor and as an abortifacients(induce abortion).
In domestic mammals, it is produced by the uterus when stimulated by oxytocin, in the event that there has been no implantation during the follicular phase. It acts on the corpus luteum to cause luteolysis, forming a corpus albicans and stopping the production of progesterone. Action of PGF2α is dependent on the number of receptors on the corpus luteum membrane.
The PGF2α isoform 8-iso-PGF2α was found in significantly increased amounts in patients with endometriosis, thus being a potential causative link in endometriosis-associated oxidative stress. Example of PGF2α Analogues :-
Latanoprost
Bimatoprost
Travoprost
Carboprost
* Dinoprost Tromethamine is a synthetic analogue of the naturally occurring prostaglandin F2 alpha. Prostaglandin F2 alpha stimulates myometrial activity, relaxes the cervix, inhibits corpus luteal steroid-genesis, and induces luteolysis by direct action on the corpus luteum.
****************************************
The following Figure:1 Summary of drugs affecting the autacoids
.

2-Peptic ulcers: Misoprostol is sometimes used to inhibit the secretion of gastric acid and to enhance mucosal resistance to injury in patients with gastric ulcer who are chronically taking non-steroidal anti-inflammatory agents. Proton-pump inhibitors, such as omeprazole, and H2 antihistamines also reduce the risk of gastric ulcer
and are better tolerated than misoprostol, which induces intestinal disorders.
III. Leukotrienes are a family of eicosanoid inflammatory mediators produced in leukocytes by the oxidation of arachidonic acid (AA) and the essential fatty acid eicosapentanoic acid (EPA) by the enzyme arachidonate 5-lipoxygenase. As their name implies, leukotrienes were first discovered in leukocytes, but have since been found in other immune cells.
Leukotrienes use lipid signaling to convey information to either the cell producing them (autocrine signaling) or neighboring cells (paracrine signaling) in order to regulate immune responses.
Leukotriene production is usually accompanied by the production of histamine and prostaglandins, which also act as inflammatory mediators.
One of their roles (specifically, leukotriene D4) is to trigger contractions in the smooth muscles lining the bronchioles; their overproduction is a major cause of inflammation in asthma and allergic rhinitis. Leukotriene antagonists are used to treat these disorders by inhibiting the production or activity of leukotrienes. 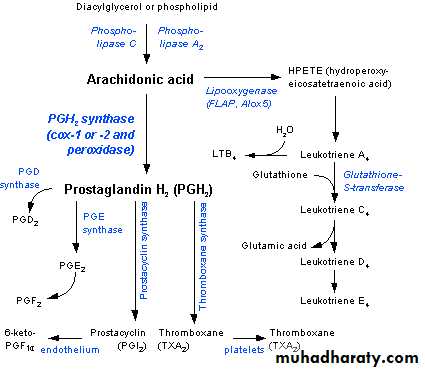 And example of leukotriene antagonists are the following drugs:-
Montelukast, Zafirlukast and Zileuton and all these drugs used in bronchial asthma and in hay fever (allergic rhinitis) .

Histamine is a chemical messenger that mediates a wide range of cellular responses, including allergic and inflammatory reactions, gastric acid secretion, and neurotransmission in parts of the brain. Histamine has no clinical applications, but agents that interfere with the action of histamine (antihistamines) have important therapeutic applications.
A. Location, synthesis, and release
Location: Histamine occurs in practically all tissues, but it is unevenly distributed, with high amounts found in lung, skin, and the gastrointestinal tract.
It is found at high concentration in mast cells or basophiles. Histamine also occurs as a component of venoms and in secretions from insect stings.
Synthesis: Histamine is an amine formed by the decarboxylation of the amino acid histidine by histidine decarboxylase-2 an enzyme that is expressed in cells throughout the body, including central nervous system (CNS) neurons, gastric mucosa parietal cells, mast cells, and basophiles In mast cells, histamine is stored in granules as an inactive complex composed of histamine and the polysulfated anion, heparin, along with an anionic protein. If histamine is not stored, it is rapidly inactivated by amine oxidase enzymes.

Release of histamine: The release of histamine may be the primary response to some stimuli, but most often, histamine is just one of several chemical mediators released. Stimuli causing the release of histamine from tissues include the destruction of cells as a result of cold, bacterial toxins, bee sting venoms, or trauma.
Allergies and anaphylaxis can also trigger release of histamine.
B. Mechanism of action
Histamine released in response to various stimuli exerts its effects by binding to one or more of four types of histamine receptors H1, H2, H3, and H4 receptors. H1 and H2 receptors are widely expressed and are the targets of clinically useful drugs. H3 and H4 receptors are expressed in only a few cell types, and their roles in drug action
are unclear. All types of histamine receptors have seven trans-membrane helical domains and transducer (from transducers) extracellular signals by way of G protein mediated second d-messenger systems. Some of histamine's wide range of pharmacologic effects are mediated by both H1 and H2 receptors, whereas others are mediated by only one class. For example, the H1 receptors are important in producing smooth muscle contraction and increasing capillary permeability. Histamine promotes vasodilation (vasodilatation) by causing vascular endothelium to release nitric oxide. *This chemical signal diffuses to the vascular smooth muscle, where it stimulates cyclic guanosine monophosphate production, causing vasodilation. Histamine H2 receptors mediate gastric acid secretion. The two most common histamine receptors exert their effects by different second-messenger pathways. The actions of H1 antihistamines occur through at least two mechanisms. Anti-allergic activities of H1 antihistamines, such as inhibition of the release of mediators from mast cells and basophiles, involves stimulation of the intracellular activity of the polyphospha-tidylino-sitol pathway. * Other actions of H1 antihistamines involve the down-regulation of nuclear transcription factors that regulate the production of pro-inflammatory cytokines and adhesion proteins. In contrast, stimulation of H2 receptors enhances the production of cyclic adenosine monophosphate (cAMP) by adenylyl cyclase

*Role in allergy and anaphylaxis

The symptoms resulting from intravenous injection of histamine are similar to those associated with anaphylactic shock and allergic reactions. These include contraction of smooth muscle, stimulation of secretions, dilation and increased permeability of the capillaries, and stimulation of sensory nerve endings.
*Role of mediators: Symptoms associated with allergy and anaphylactic shock result from the release of certain mediators from their storage sites. Such mediators include histamine, serotonin, leukotrienes, and the eosinophil chemotactic factor of anaphylaxis. In some cases, these cause a localized allergic reaction, producing, for example, actions on the skin or respiratory tract. Under other conditions, these mediators may cause a full-blown anaphylactic response. It is thought that the difference between these two situations results from differences in the sites from which mediators are released and in their rates of release. For example, if the
release of histamine is slow enough to permit its inactivation before it enters the bloodstream, a local allergic reaction results. However, if histamine release is too fast for inactivation to be efficient, a full-blown.
THE END