-Synthesis:- glycerol phosphate is the initial acceptor of fatty acid during the synthesis of triacylglycerol.

Pathways for production of glycerol phosphate in liver and adipose tissue

Note:- a- Adipocyte can take up glucose only in the presence of the hormone insulin. Thus, when plasma glucose—and, therefore, plasma insulin—levels are low, adipocytes have only a limited ability to synthesize glycerol phosphate, and cannot produce TAG.]
b- A fatty acid must be converted to its activated form(attach to co enzyme A) before it can participate in triacylglycerol synthesis.

The function of TG in the body is energy store. Saturated and unsaturated fatty acids are store as TG. Mainly the synthesis of TG occur in the liver and excreted as VLDL or in the adipose tissue and store there. Fatty acids in the adipose tissue are derived from the VLDL and the chylomicron by the action of lipoprotein lipase.
- Glycerol 3 phosphate is the initial acceptor of fatty acid during TG synthesis. There are two sources for glycerol 3-P in the liver :
From Dihydroxy acetone phosphate one of the intermediate of glycolysis which reduces by the NADH in the present of the enzyme glycerol P- dehydrogenase.
In the liver from the glycerol by the action of the enzyme glycerol kinase.
In adipose tissue dihydroxy acetone phosphate is a source of glycerol 3 phosphate. The intermediate that give us fatty acid is the fatty acyl CoA.

Hormonal regulation of triacylglycerol degradation in the adipocyte 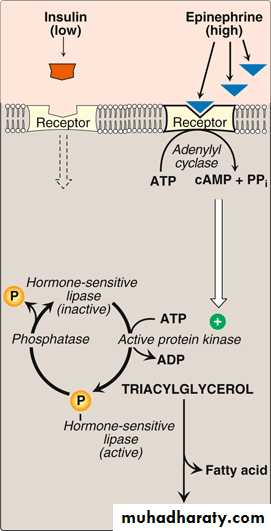 Fate of glycerol: The glycerol released during TAG degradation cannot be metabolized by adipocytes because they apparently lack glycerol kinase. Rather, glycerol is transported through the blood to the liver, where it can be phosphorylated. The resulting glycerol phosphate can be used to form TAG in the liver, or can be converted to DHAP by reversal of the glycerol phosphate dehydrogenase reaction. DHAP can participate in glycolysis or gluconeogenesis.
Fate of fatty acids: The free (unesterified) fatty acids move through the cell membrane of the adipocyte, and immediately bind to albumin in the plasma. They are transported to the tissues, where the fatty acids enter cells, get activated to their CoA derivatives, and are oxidized for energy.