2nd stage
Dr.Lamees Majid Al-Janabi
OXIDATION OF THE FATTY ACIDS
Fatty acids stored in adipose tissue, in the form of neutral TAG, serve as the body's major fuel storage reserve. TAGs provide concentrated stores of metabolic energy because they are highly reduced and largely anhydrous.
The entry of long chain fatty acids to the cell is mediated by fatty acid binding proteins. The fatty acids must be converted into active intermediates by a reaction with ATP before they can undergo any further metabolism. Long-chain fatty acids are required for energy production during the fasting state. 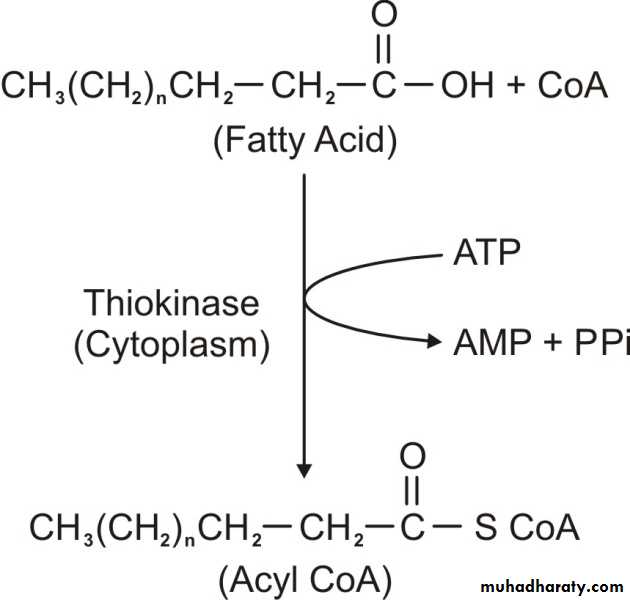 This is the only step in the fatty acid oxidation that requires ATP and it is irreversible step because the PPi is hydrolyzed by the pyrophosphatase enzyme to yield two inorganic phosphates. 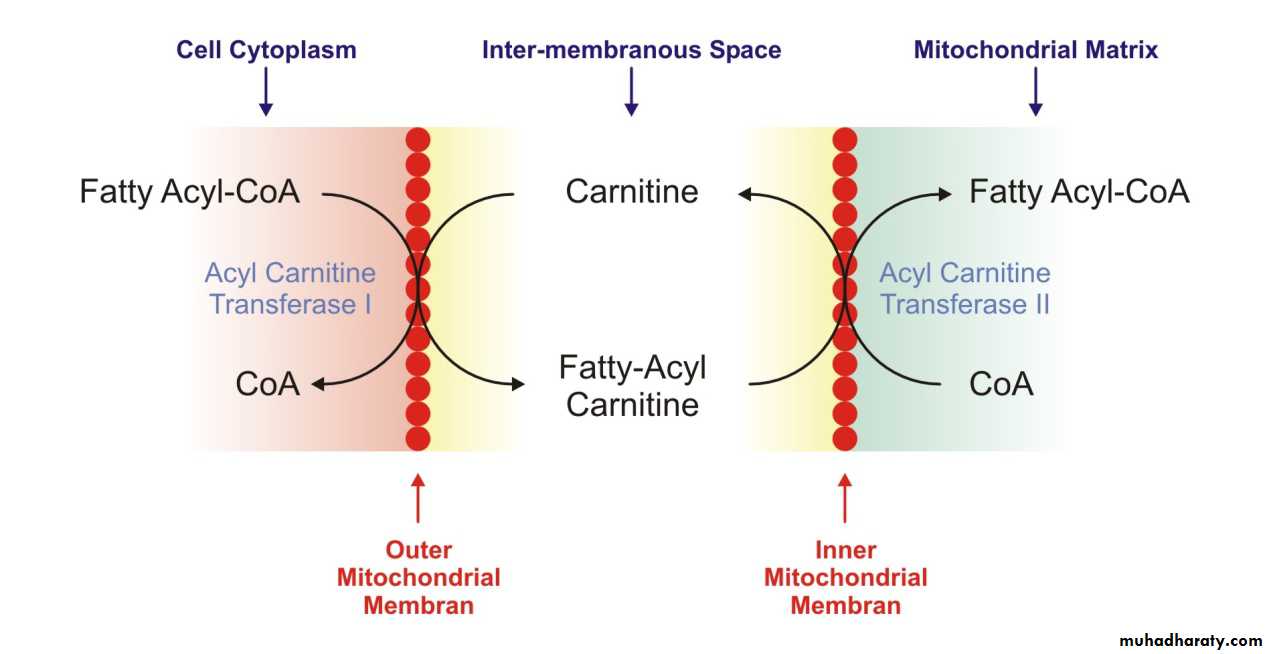 Medium chain fatty acids (shorter than 12 carbon atoms) can cross the mitochondrial membrane without the aid of carnitine, and even its entry to the cell does not require fatty acid binding proteins .
Carnitine could be obtained either from the diet (meat and meat products) or by being synthesized inside the body (from amino acids lysine and methionine) through an enzymatic system found in the liver and the kidneys.
The deficiency of carnitine occurs due to many reasons :
-Could be congenital
-Could occur in newborn babies (especially pre-mature) and this is due to immaturity of the enzymatic system which will lead to inadequate synthesis of carnitine.
-Malnutrition and those on strictly vegetarian diet
-Liver disease (because it is a main site for the synthesis).
-Increased requirement to carnitine
*Pregnancy.
*Severe Infection.
*Severe Burns.
*Trauma.
*Hemodialysis.
The effect of carnitine deficiency is decrease in the ability of oxidizing long chain fatty acids and this may lead to weight loss, fatty liver, and hypoglycemia. 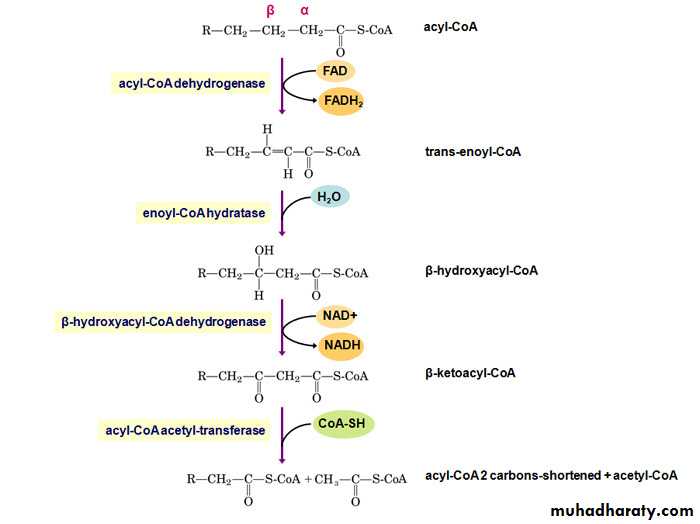 The FADH2 and NADH formed from oxidation of the fatty acid that has even number of carbon atoms equal :

Oxidation of the Fatty Acids with Odd Number of C atoms:

The β oxidation of the fatty acid chains that have odd number of carbon atoms will use the same reaction steps until the final three carbon acids are reached and they are called here propionyl-CoA. The propionyl-CoA will be converted into methyl-malonyl-CoA by a step that requires the use of one ATP. Then the methyl-malonyl-CoA will be converted into the final product which is the succinyl-CoA. 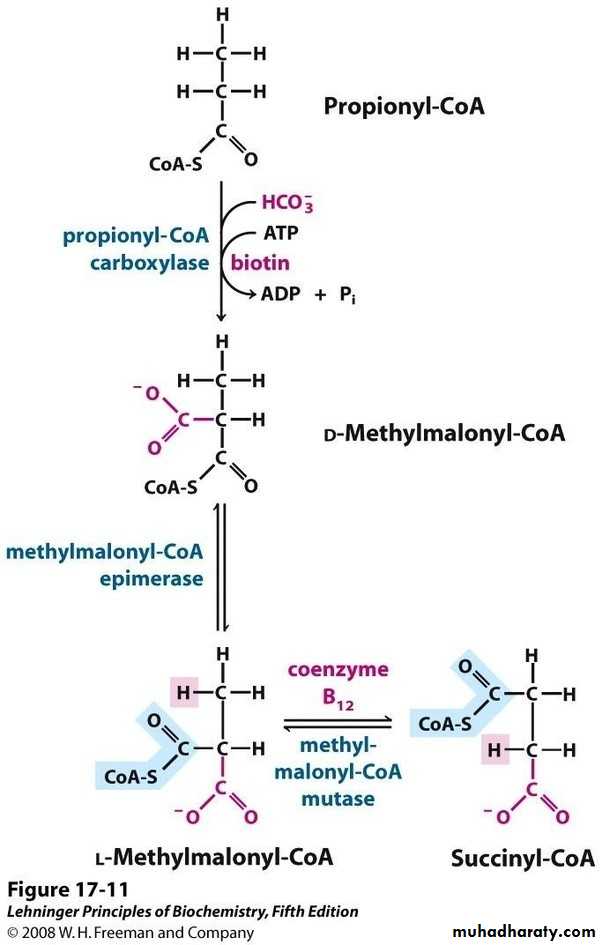 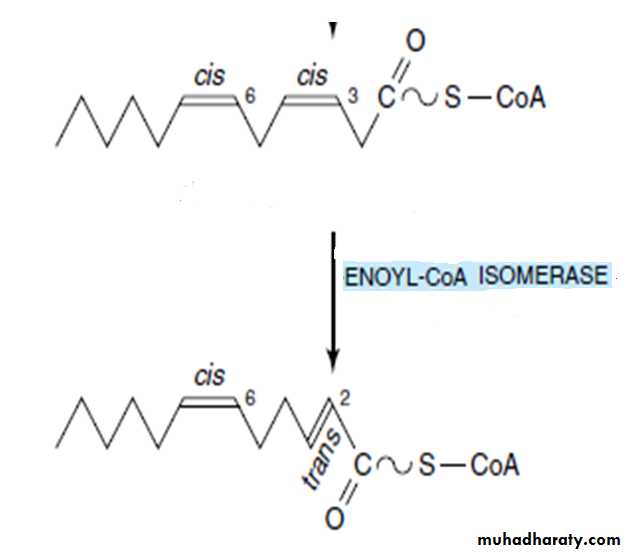 After the transforming of the double bond to C2-C3 position now the fatty acid will undergo the same reaction of β oxidation but it will not pass in the first step that yield the FADH2.{so the oxidation of unsaturated fatty acid with 16 carbon atom will give only 6 FADH2 and not 7 FADH2). So removal of acetyl CoA in this step will produce only 3ATP not 5ATP.