Synapses – specialized junction where an axon terminal contacts another neuron or cell type , by which excitable cells communicate with one another where information is transmitted from between them. As Nerve to nerve synapse, nerve to muscle - neuromuscular junction, and nerve to gland - neuroglandular junction

synapse: is the functional connection between a neuron and a second cell . In the CNS, this other cell is also neuron In the PNS, the other cell may be either a neuron or an effecter cell within a muscle or gland.

What are the components of a synapse ? 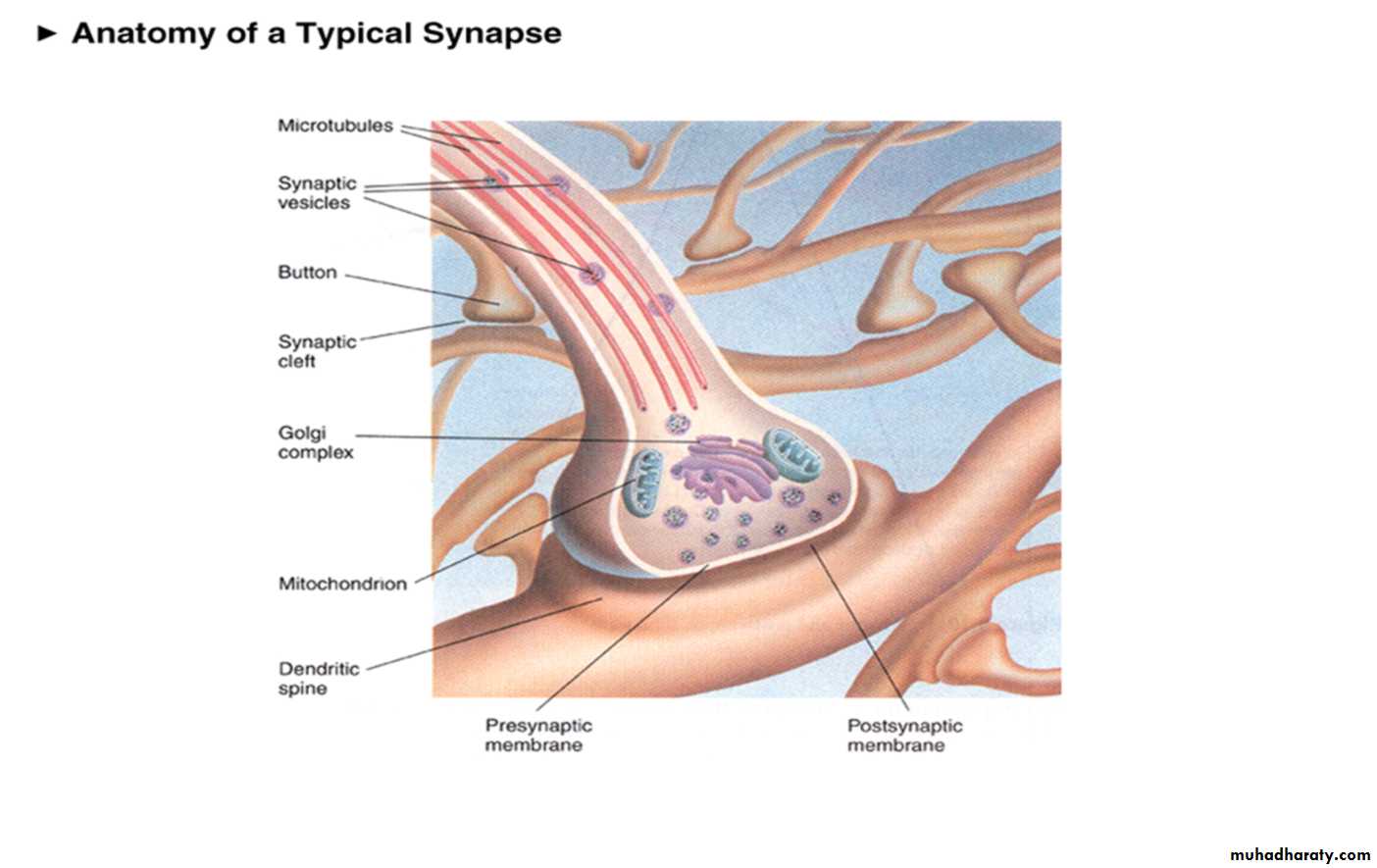 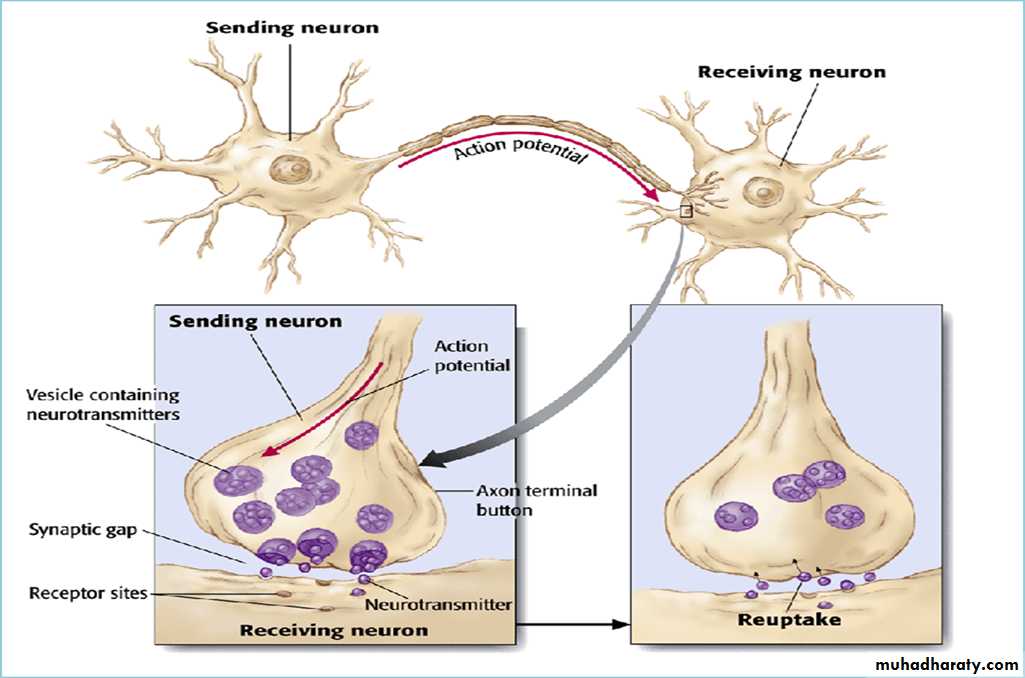 There are two general types of synapses

Electrical Synapses (Gap Junctions)
Chemical Synapses (Neurological)
Types of Synapses Electrical Synapses
Electrical synapses allow current to flow from one excitable cell to the next via low resistance pathways between the cells called gap junctions which are account for the very fast conduction in these tissues. Like in cardiac ventricular muscle, in the uterus, and in the bladder, allowing cells in these tissues to be activated simultaneously and ensuring that contraction occurs in a coordinated manner.
Chemical Synapses Transmission across the majority of synapses in the nervous system is one-way, and occurs through the release of chemical neurotransmitters from pre synaptic cells. There is a gap between the presynaptic cell membrane and the postsynaptic cell membrane, known as the synaptic cleft.
Information is transmitted across the synaptic cleft via a neurotransmitter, a substance that is released from the presynaptic terminal and binds to receptors on the postsynaptic terminal.

The following sequence of events occurs at chemical synapses: 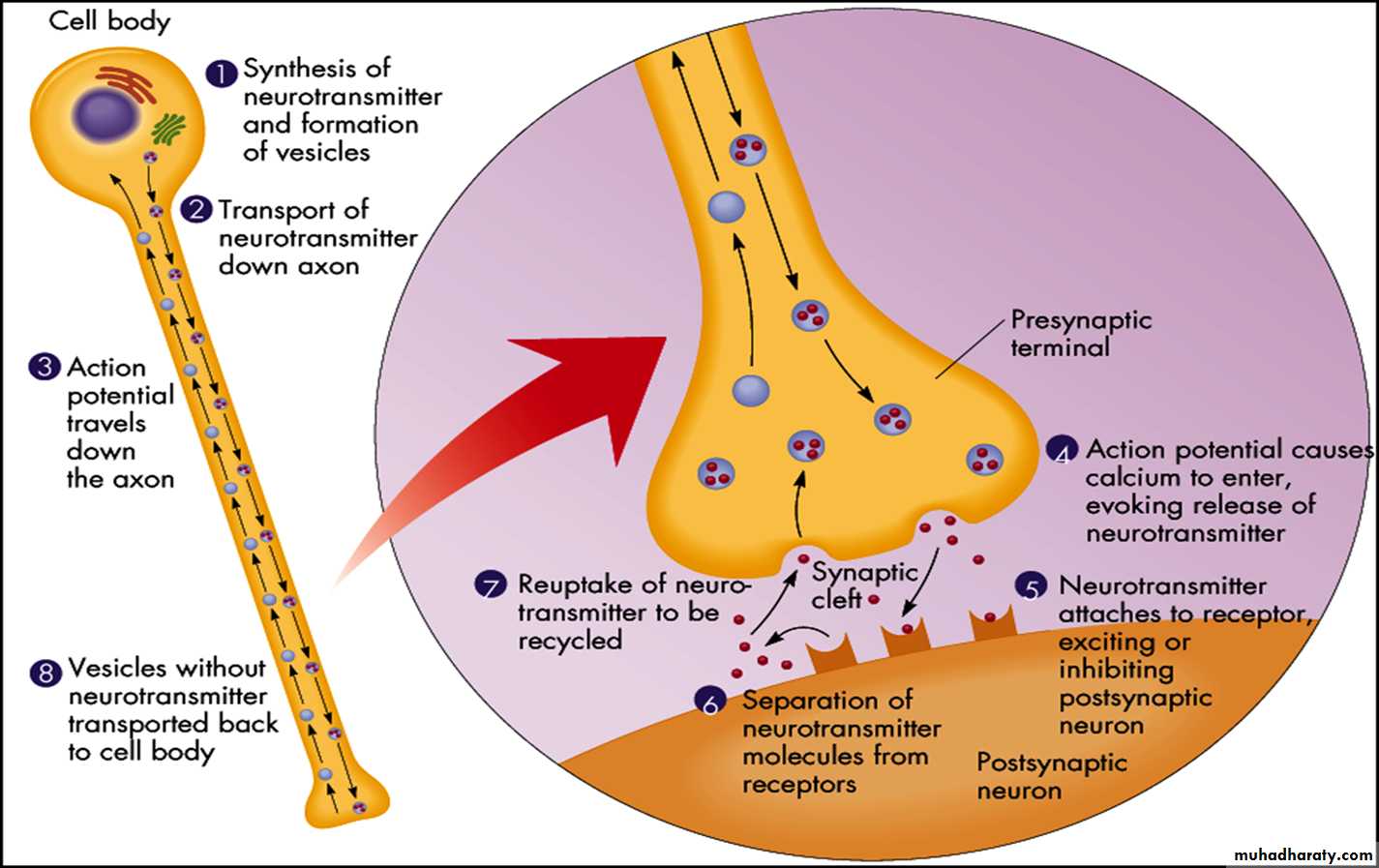 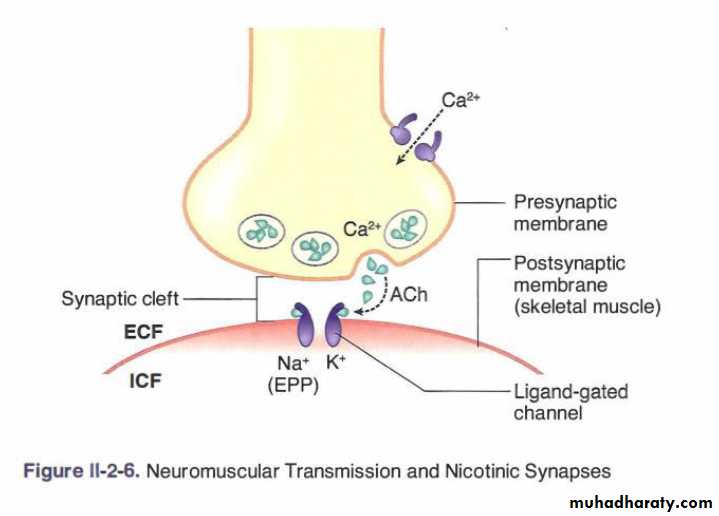 Response of the postsynaptic neuron? 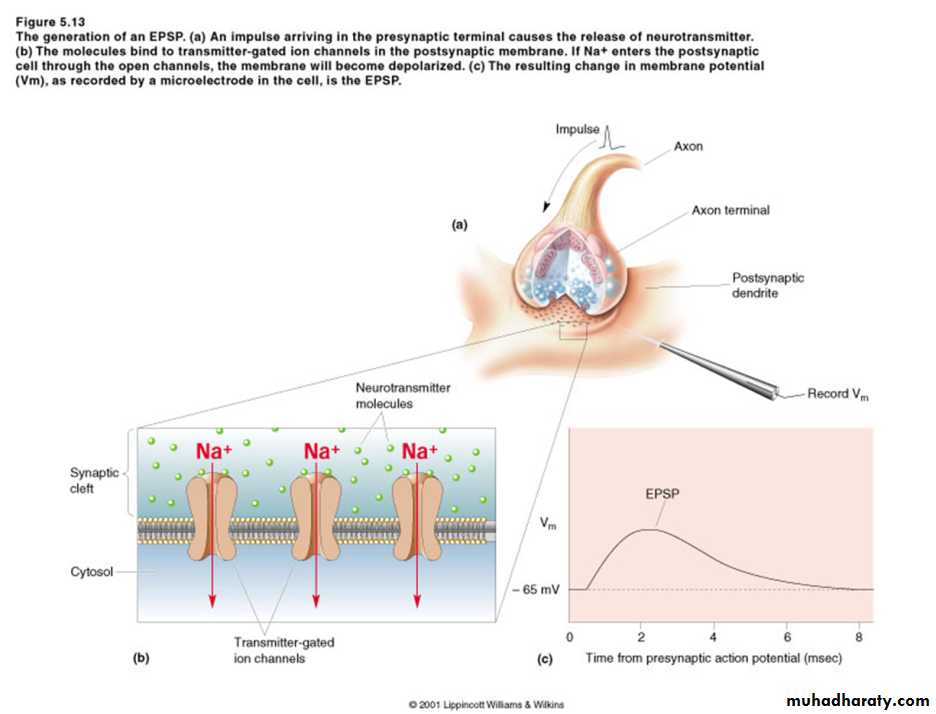 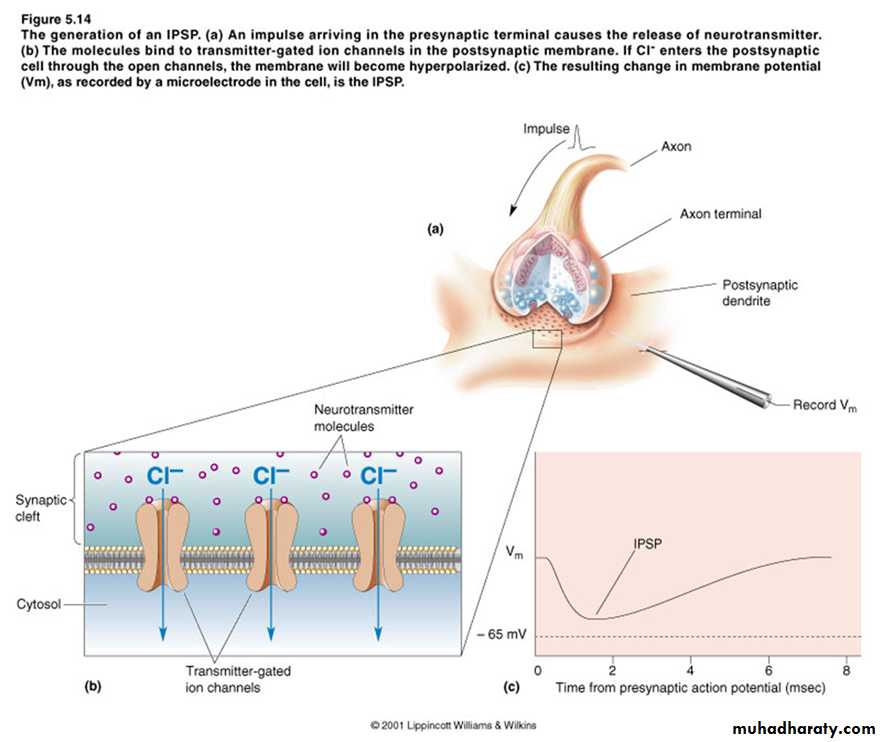 AP ACTION OTENTIAL is NOT produced at the synapse ?

Neurotransmitters are signal molecules that are released from neurons depending on the location of neuron and type of effector (target) cell it acts on , that s allow the transmission of signals from one neuron to the next across synapses
They are also found at the axon endings of motor neurons, where they stimulate the muscle fibers.
Neurotransmitters function by changing the permeability of the cell membrane to various ions such as sodium and potassium. If an excess of sodium ions flow into the nerve cell, an impulse is generated. If an excess of potassium ions flow out, the impulse is inhibited. 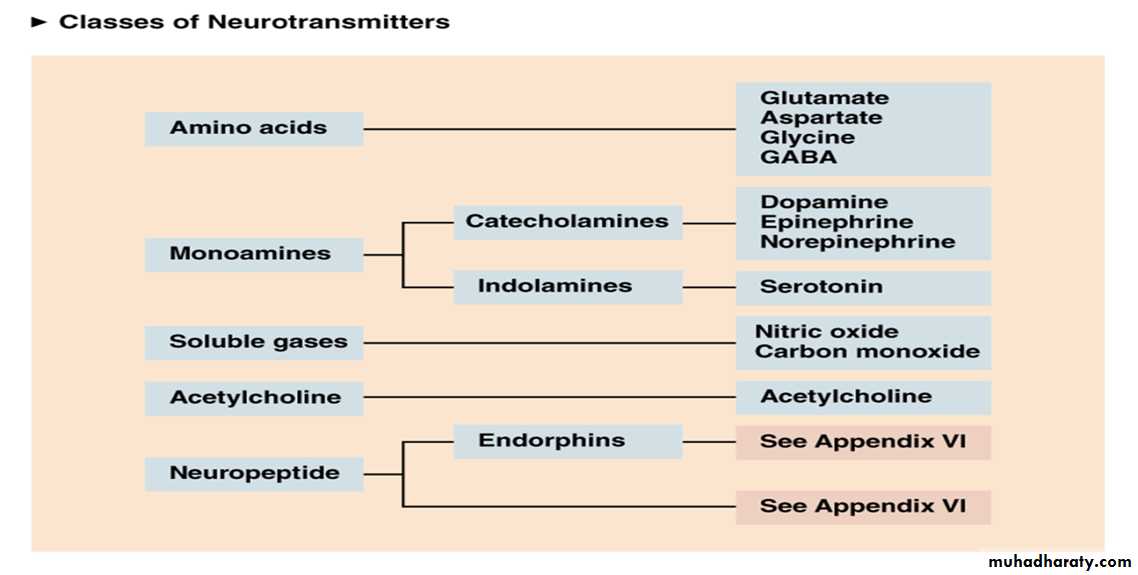 The following criteria are used to formally designate a substance as a neurotransmitter:

1) Glutamate - accounts for approximately 75% of all excitatory transmission in the brain, so it is the most common excitatory NT in the brain. It is released in cerebral cortex, brain stem. Involved in learning and memory. Also called glutamic acid.
2) Aspartate - similar to glutamate but found mostly in the spinal cord for excitation. (aspartic acid)

Acetylcholine was the first neurotransmitter to be discovered.

It is responsible for much of the stimulation of muscles, including the muscles of the gastro-intestinal system.
It is also found in sensory neurons and in the autonomic nervous system, and has a part in scheduling REM (dream) sleep.
Acetylcholine is transmitted within cholinergic pathways that are concentrated mainly in specific regions of the brainstem and are thought to be involved in cognitive functions, especially memory. Severe damage to these pathways is the probable cause of Alzheimer’s disease.
The plant poisons curare cause paralysis by blocking the acetylcholine receptor sites of muscle cells. The well-known poison botulin works by preventing the vesicles in the axon ending from releasing acetylcholine, causing paralysis.
ACh binds to two types of receptors, 1) nicotinic and 2) muscarinic.
In the PNS, ACh is the sole NT used by the Somatic nervous system (SNS): at the NMJ ACh binds to nicotinic receptors on skeletal muscle and causes excitation (contraction) of skeletal muscle.
In the Autonomic nervous system (ANS), it is release by all neurons at the ganglia and binds to nicotinic receptors on postgalionic neurons. It is also released by parasympathetic postgalionic neurons and binds with muscarinic receptors on effector tissue (cardiac muscle, smooth muscle and glands).
In general terms, nicotinic receptors are always excitatory (in that when stimulated they cause an EPSP) and muscarinic receptors are generally inhibitory (in that when stimulated they usually cause an IPSP).

Botox = a neurotoxin produced by a bacterium Chlostridium botuninum , It causes food poisoning (botulism)
The toxin blocks the release of acetyl choline neurotransmitter to muscles , Causes muscle paralysis
Cosmetically used to smooth lines and creases
Medically used to relax muscles that causing illnesses such as spasms and strabismus (cross-eyed).
Botulinum toxin binds to pre-synaptic membranes at neuromuscular junctions, enters the neuron, and then a component of the toxin interferes with the release of neurotransmitter.Release of acetylcholine is blocked.
No acetylcholine? No muscular contraction. (flaccid paralysis)

Muscles physiology
There are three types of muscle tissues in the body:

1. skeletal muscle: Located throughout the body connected to bones

and joints, striated in appearance, under somatic nervous control.

2. smooth muscle or visceral muscle: Located in the walls of organs,

no striations, under involuntary or autonomic nervous control.
3. cardiac muscle: Located only in the heart, striated in appearance,
under involuntary or autonomic nervous control.
All muscle tissues consist of elongated cells called fibers.
The cytoplasm of muscle cells is called sarcoplasm and the
surrounding cell membrane or plasma lemma is called sarcolemma.
Each muscle fiber sarcoplasm contains numerous myofibrils, which
contain two types of contractile protein filaments, actin and myosin

•Cross-bridges. The small projections from the sides of the myosin filaments are cross-bridges. They protrude from the surfaces of the myosin filament along its entire length except in the center. Myosin crossbridges interact with actin filaments causing contraction.
•Z disc. The ends of the actin filaments are attached to Z discs .The Z disc passes across the myofibril and from one to another, attaching and aligning the myofibrils across the muscle fiber. The entire muscle fiber therefore has light and dark bands, giving skeletal and cardiac muscle astriated appearance
Sarcomere. The portion of a myofibril that lies between two successive Z discs is called a sarcomere..
Z lines: boundary of the sarcomere.
I Band: region of only actin myofilaments.
H Zone: region of only myosin myofilaments.
A Band: region of both actin and myosin.
M-Line: The exact midpoint of the sarcomere.

Myofilaments are arranged in sarcomeres 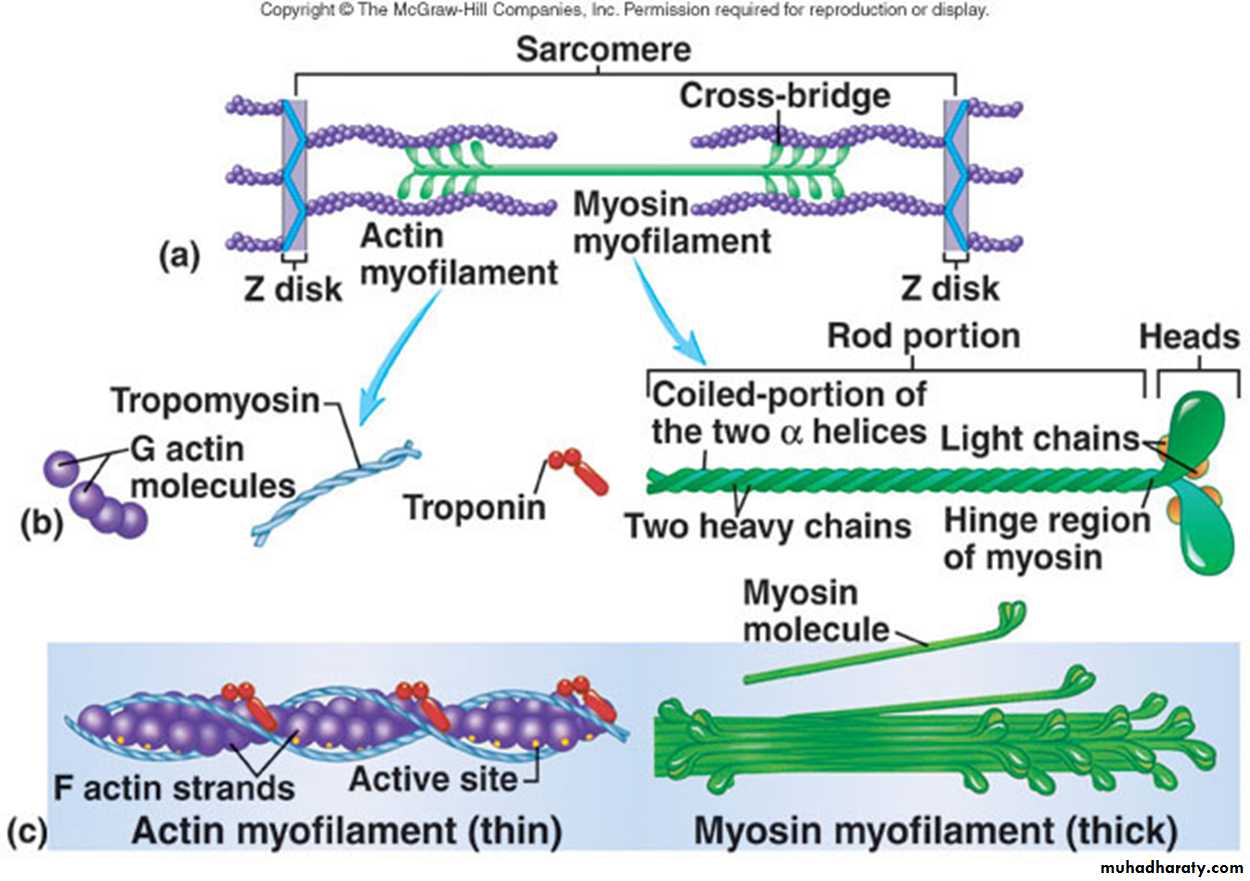 The Myosin Filament Is Composed of Multiple Myosin Molecules. The

tails of myosin molecules bundle together to form the body of the
filament, whereas the myosin heads and part of each myosin molecule
hang outward to the sides of the body, providing an arm that extends the
head outward from the body.
The protruding arms and heads together are called cross-bridges. An
important feature of the myosin head is that it functions as an adenosine
triphosphatase (ATPase) enzyme, which allows it to cleave adenosine
triphosphate (ATP) and thus energize the contraction process 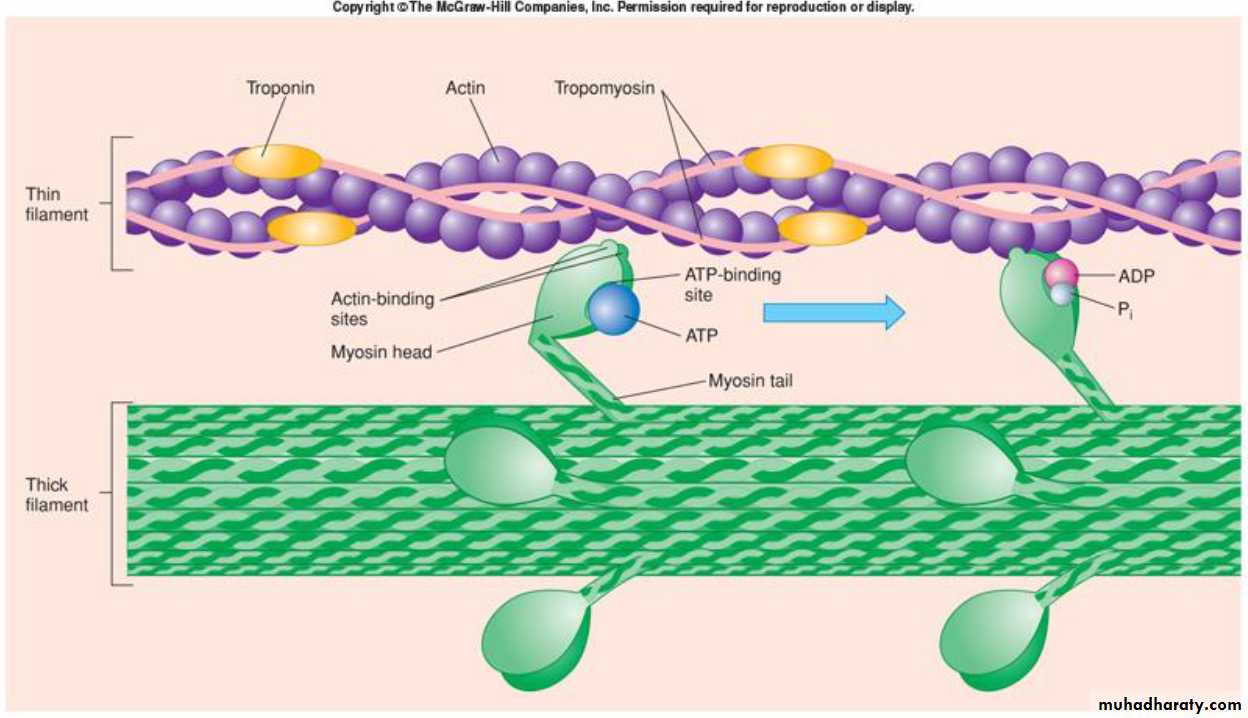 The Actin Filament Is Composed of Actin, Tropomyosin and Troponin.

•The filament tropomyosin lies in groove between double row of G-actins of thin myofilament •Troponincomplex is attached to tropomyosin at intervals.
In relaxed muscle, tropomyosin blocks binding sites on actin so crossbridges can’t connect. This occurs when sarcoplasmic Ca++levels are low
•Binding, thus contraction, can only occur when binding sites are exposed 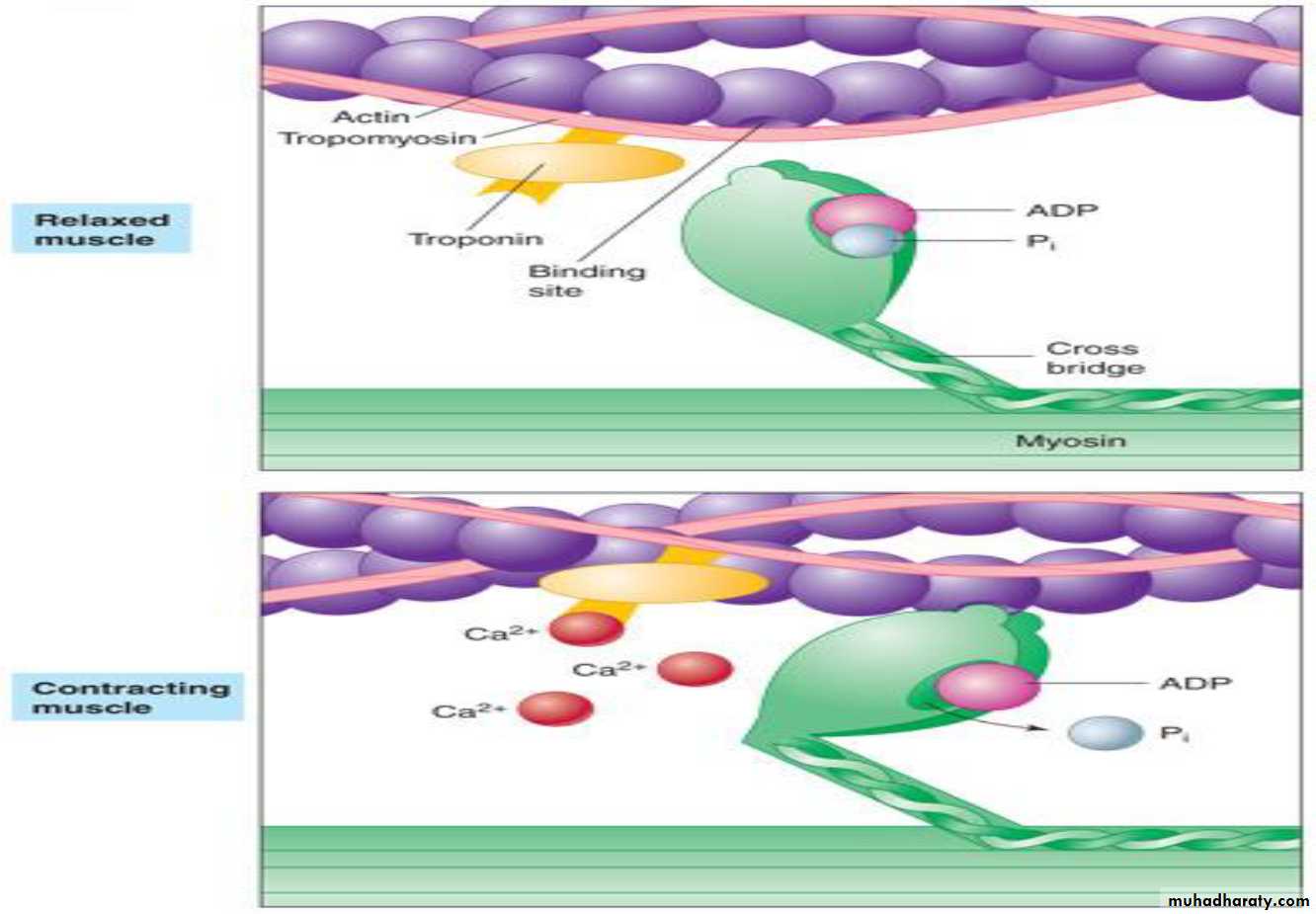 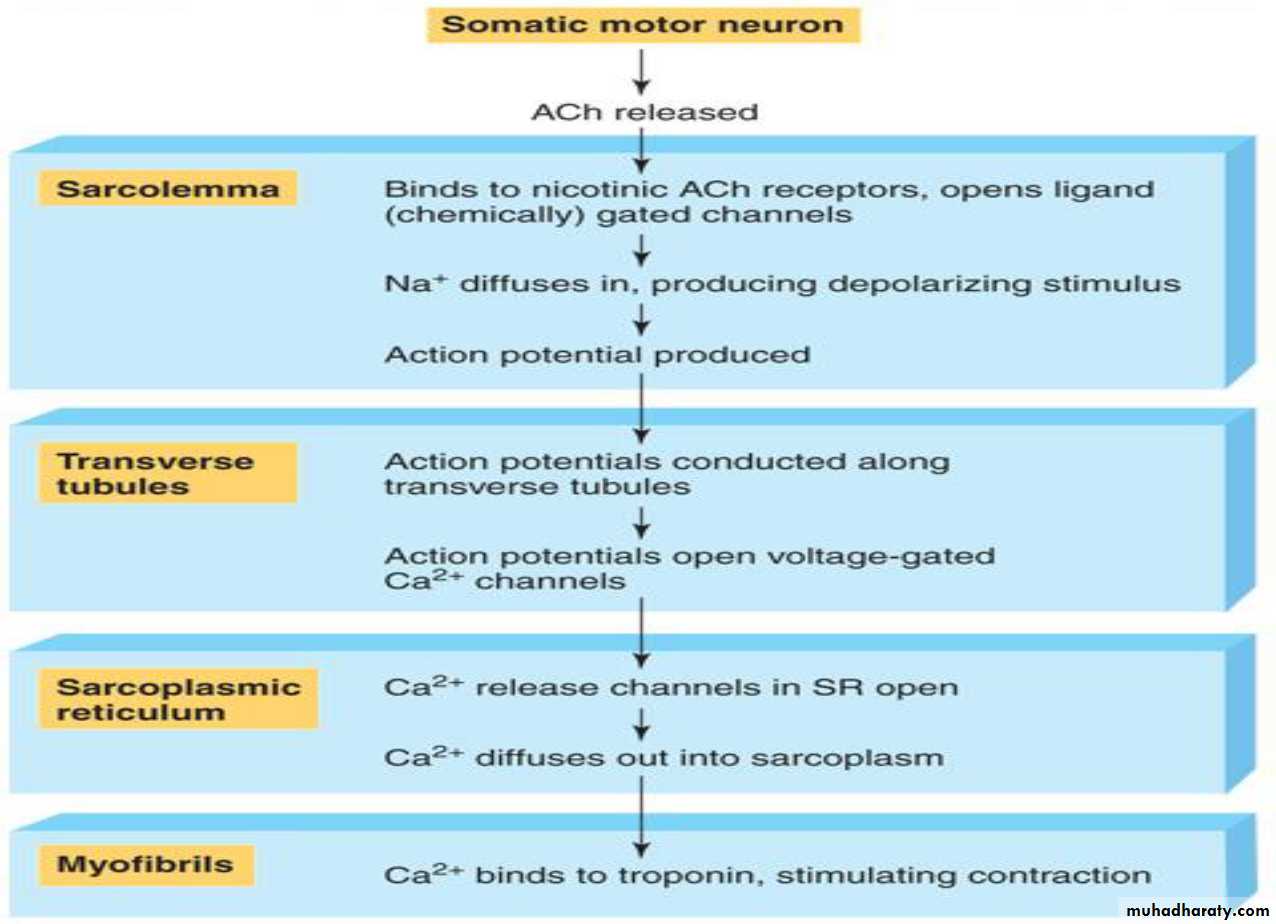 2. AP causes calcium channels to open at synaptic end bulb which, in turn, causes synaptic vesicles to undergo exocytosis thus releasing their neurotransmitter (Ach).
3. ACh diffuses across synaptic cleft and binds to membrane receptors on motor end (muscle cell).
4. Binding of ACh causes sodium channels to open and thus a depolarization of motor end plate.
5. Acetylcholinesterase breaks down the ACh.
6. At threshold an action potential ensues and spreads from motor end plate outward along sarcolemma.
7. Action potential travels down into muscle cell via transverse tubules.
8. AP causes calcium channels to open on terminal cisternae and calcium diffuses out throughout sarcoplasm.
9. Calcium binds to troponin causing the troponin/tropomyosin complex to move such that binding sites on actin for cross bridges are exposed.
10. Cross bridges connect to actin.
11. ATP is then released and the crossbridge bends pulling the thin myofilaments inward toward the center of sarcomere.
12. Z lines are pulled toward one another and the sarcomere shortens.
13. Another ATP binds to the crossbridge; crossbridge releases from actin; ATP is then split and the energy causes crossbridge to straighten again (energized state).
14. Entire process is repeated so long as there are stimulatory action potentials. 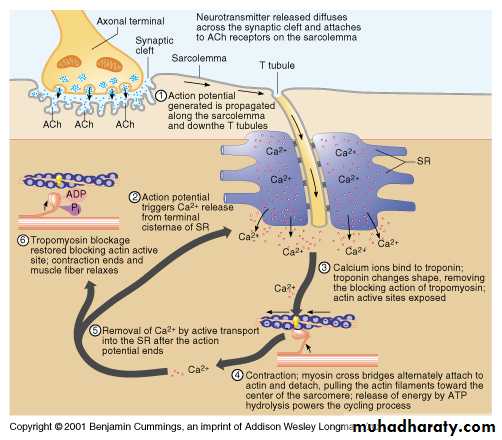 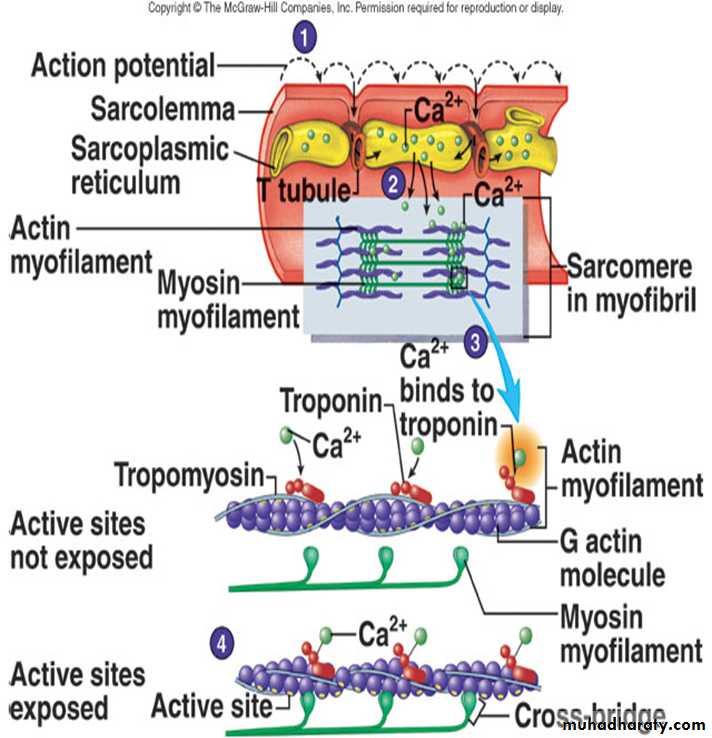 The initiation and execution of muscle contraction occur in the following
sequential steps:
1. Skeletal muscle fibers are innervated by large, myelinated nerve fibers that originate from somatic motor neurons of the spinal cord. Each nerve fiber normally stimulates three to several hundred skeletal muscle fibers.
The nerve ending makes a junction, called the neuromuscular junction.
When a nerve impulse (action potential) reaches the neuromuscular
junction، vesicles containing acetylcholine are released into the synaptic cleft. This occurs because When the action potential spreads over the nerve terminal the calcium-gated channels open
allowing calcium ions to diffuse into the terminal of nerve. The calcium ions are believed to exert an attractive influence on the acetylcholine
vesicles، forcing these vesicles to fuse with the neural membrane and empty their acetylcholine into the synaptic space via the process of exocytosis. .
2. Acetylcholine opens acetylcholine-gated ion channels on the postsynaptic muscle membrane. This allow large numbers of sodium ions to pour into the inside of the muscle fiber, carrying with them large numbers of positive charges. This effect creates a local potential change at the muscle fiber membrane. This potential normally leads to opening of voltage-gated sodium channels, which initiate an action potential.
3. The action potential travels along the muscle fiber membrane, causing the sarcoplasmic reticulum to release calcium ions into the myofibrils that have been stored in the sarcoplasmic reticulum

4. The calcium ions initiate attractive forces between the actin and myosin filaments, causing them to slide together; this called the Sliding Filament Mechanism. Mechanical forces generated by the interaction of myosin cross-bridges with actin filaments cause the actin filaments to slide inward among the myosin filaments. But when AP travels over the muscle
forces are inhibited fiber membrane, the sarcoplasmic reticulum releases large quantities of calcium ions, which activate the forces between the myosin and actin filaments, and contraction begins.
Myasthenia Gravis
Myasthenia gravis, which occurs in about 1 in every 20,000 persons, causes muscle paralysis because of inability of the neuromuscular junctions NMJ to transmit enough signals from the nerve fibers to the muscle fibers.
• Myasthenia gravis is an autoimmune disease(Antibodies which destroy the nicotinic Ach in NMJ , Antibodies 90% serum of patients) in which the patients have developed immunity against their own acetylcholine receptors the patient dies of paralysis, paralysis of the respiratory muscles .
• The disease can be managed by administering neostigmine or other anticholinesterase
drug, which allows larger than normal amounts of acetylcholine to accumulate in the synaptic space.
It's characterized by weakness of skeletal muscles due development of antibodies in the body against its own Ach activated ion channels.