Rabies Virus and Other CNS Vir

Rabies virus
Rabies is an acute infection of the central nervous system that is almost always fatal.
The virus is usually transmitted to humans from the bite of a rabid animal.
Although the number of human cases is small, rabies is a major public health problem because it is widespread among animal reservoirs 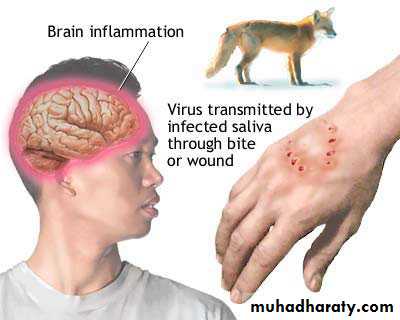 Properties of the Rabies Virus

The viruses are classified in the family Rhabdoviridae involves wide array of viruses with broad host range. Group includes the deadly rabies virus
The rhabdoviruses are rod- or bullet-shaped particles measuring 75 x 180 nm.
The particles are surrounded by a membranous envelope with protruding spikes, which are composed of the viral glycoprotein. Inside the envelope is a ribonucleocapsid.
The genome is single-stranded, negative-sense RNA
Virions contain an RNA-dependent RNA polymerase.
Replication: Cytoplasm; virions bud from plasma membrane
There is a single serotype of rabies virus. The G glycoprotein is a major factor in rabies virus neuroinvasiveness and pathogenicity

Electron micrograph of bullet-shaped particle typical of the rhabdovirus family 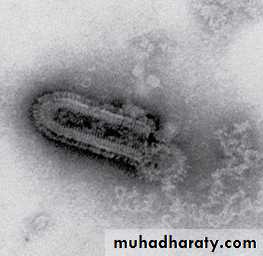 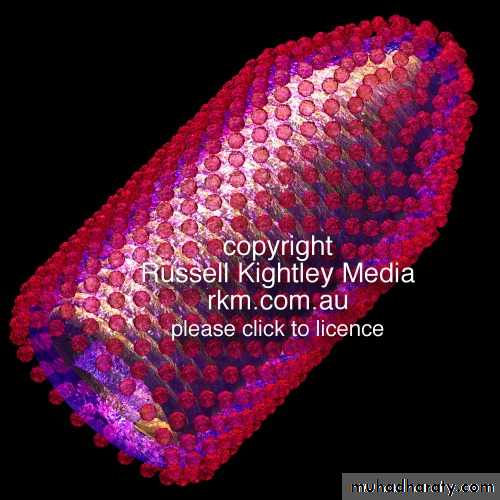 Schematic model of rabies virus showing the surface glycoprotein spikes extending from the lipid envelope that surrounds the internal nucleocapsid and the matrix protein lining the envelope. The nucleocapsid comprises the single RNA genome plus nucleoprotein and the polymerase proteins. 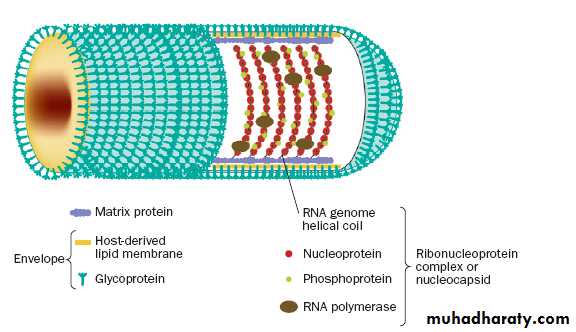 Rabies virus attaches to cells via its glycoprotein spikes; acetylcholine receptor may serve as a cellular receptor for rabies virus.
The single-stranded RNA genome is transcribed by the virion RNA polymerase to five mRNA species. The template for transcription is the genome RNA in the form of ribonucleoprotein (RNP) (encased in N protein and containing the viral transcriptase).
The mRNAs code for the five virion proteins: nucleocapsid (N), polymerase proteins (L, P), matrix (M), and glycoprotein (G).
The genome RNP is a template for complementary positive-sense RNA, which is responsible for the generation of negative-sense progeny RNA.
Ongoing translation is required for replication, particularly of viral N and P proteins. 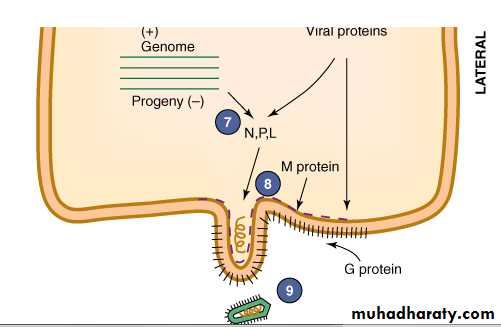 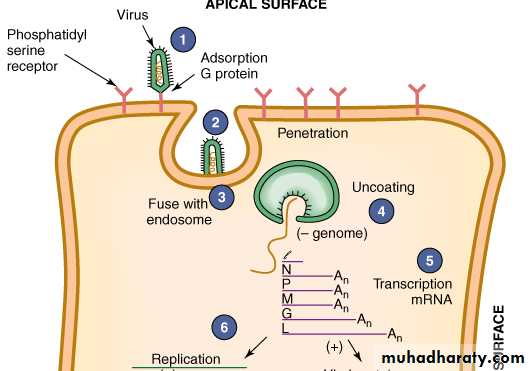 The newly replicated genomic RNA associates with the viral transcriptase and nucleoprotein to form RNP cores in the cytoplasm.
The particles acquire an envelope by budding through the plasma membrane.
The viral M matrix protein forms a layer on the inner side of the envelope, whereas the viral G glycoprotein is on the outer layer and forms the spikes

Rabies virus multiplies in muscle or connective tissue at the site of inoculation and then enters peripheral nerves at neuromuscular junctions and spreads up the nerves to the central nervous system. However, it is also possible for rabies virus to enter the nervous system directly without local replication
It multiplies in the central nervous system and progressive encephalitis develops. The virus then spreads through peripheral nerves to the salivary glands and other tissues. However, Rabies virus has not been isolated from the blood of infected persons
There is a higher attack rate and shorter incubation period in persons bitten on the face or head; the lowest mortality occurs in those bitten on the legs 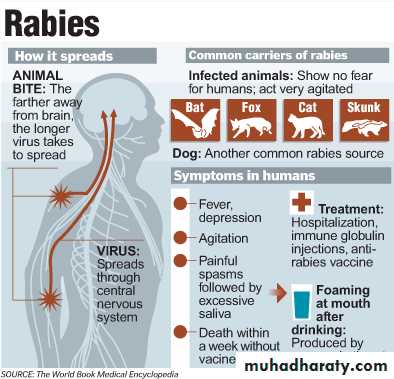 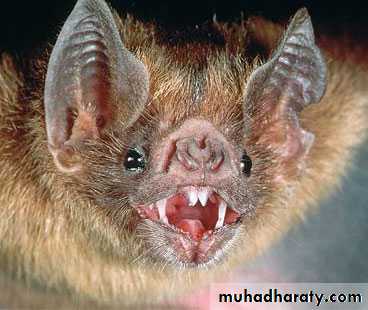 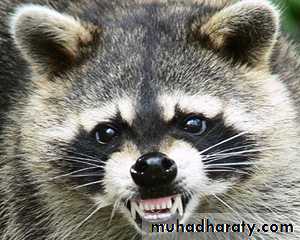 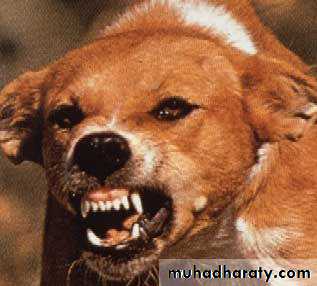 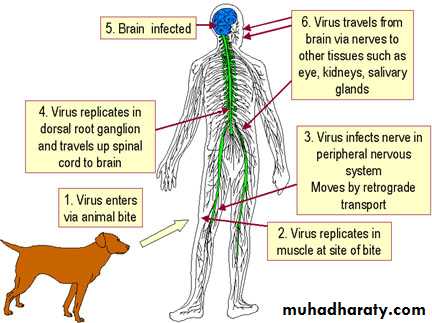 Rabies Pathogenesis & Pathology
Rabies virus produces a specific eosinophilic cytoplasmic inclusion, the Negri body, in infected nerve cells. Negri bodies are filled with viral nucleocapsids. The presence of such inclusions is pathognomonic of rabies but is not observed in at least 20% of cases. Therefore, the absence of Negri bodies does not rule out rabies as a diagnosis 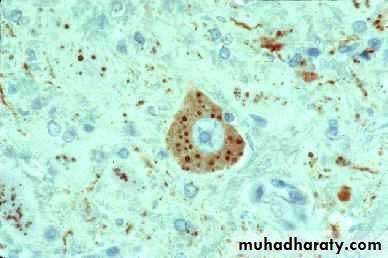 spread to humans by bites of rabid animals or by contact with saliva from rabid animals.
The disease is an acute, fatal encephalitis. The incubation period in humans is typically 1–2 months. It is usually shorter in children than in adults.
The clinical spectrum can be divided into three phases: a short prodromal phase, an acute neurologic phase, and coma. The prodromal phase may show any of the following nonspecific symptoms: malaise, anorexia, headache, photophobia, nausea and vomiting, sore throat, and fever
During the acute neurologic phase, which lasts 2–7 days, patients show signs of nervous system dysfunction such as nervousness, and hallucinations. A large fraction of patients will exhibit hydrophobia (fear of water) followed by convulsive seizures or coma and death. The major cause of death is respiratory paralysis.

1. Tissues infected with rabies virus are currently identified most rapidly and accurately by means of immunofluorescence or immunoperoxidase staining using antirabies monoclonal antibodies (IHC)
2. A definitive pathologic diagnosis of rabies can be based on the finding of Negri bodies in the brain or the spinal cord they have basophilic granules in an eosinophilic matrix.
3. Reverse transcription-PCR testing can be used to amplify parts of a rabies virus genome from fixed or unfixed brain tissue.
4. Viral Isolation: Available tissue is inoculated intracerebrally into suckling mice
5. Serology: Serum antibodies to rabies can be detected by immunofluorescence

All vaccines for human use contain only inactivated rabies virus (Killed vaccine), with Human Rabies immune globulin (HRIG)
There is no successful treatment for clinical rabies.
Preexposure vaccination is desirable for all persons who are at high risk of contact with rabid animals, such as veterinarians, animal care personnel, certain laboratory workers
An oral vaccinia–rabies glycoprotein recombinant virus vaccine (V-RG) proved effective at controlling rabies in foxes in Europe

A. Viral encephalitis
1. Herpes simplex virus encephalitis is caused by HSV type 1
2. Varicella-zoster virus can cause meningitis or meningo-encephalitis as a result of reactivation of the virus in the brain
3. arboviruses (e.g. Japanese encephalitis virus)
4. rabies virus causes potentially fatal encephalitis

Viral meningitis is usually less severe than bacterial meningitis (such as meningococcal meningitis), which can be fatal and needs prompt treatment. The most common causes of viral meningitis are
1. enteroviruses (especially echoviruses and coxsackie A and B viruses),
2. HSV type 2 virus
3. mumps virus
Other Viral CNS infections

This is a rare condition, with an incidence of one in a million measles cases, but is invariably fatal. Typically symptoms appear several years (10–15 years) after the initial acute attack of measles in early childhood. The first signs are deterioration in intellect (poor performance at school) followed by motor dysfunction and seizures. A defect in the measles virus allows it to persist in the brain by ‘hiding’ from the immune system
Other Viral CNS infections

This is an acute ascending symmetrical paralytic disease associated with flaccid paralysis, which can be triggered by various viral and bacterial infections (e.g. CMV, EBV, HIV, Japanese encephalitis virus and Campylobacter jejuni). Guillain–Barre´ syndrome is more common in adults than in children. Overall, 80%of those affected by syndrome recover to lead normal lives, but some are left with permanent disability
Other Viral CNS infections 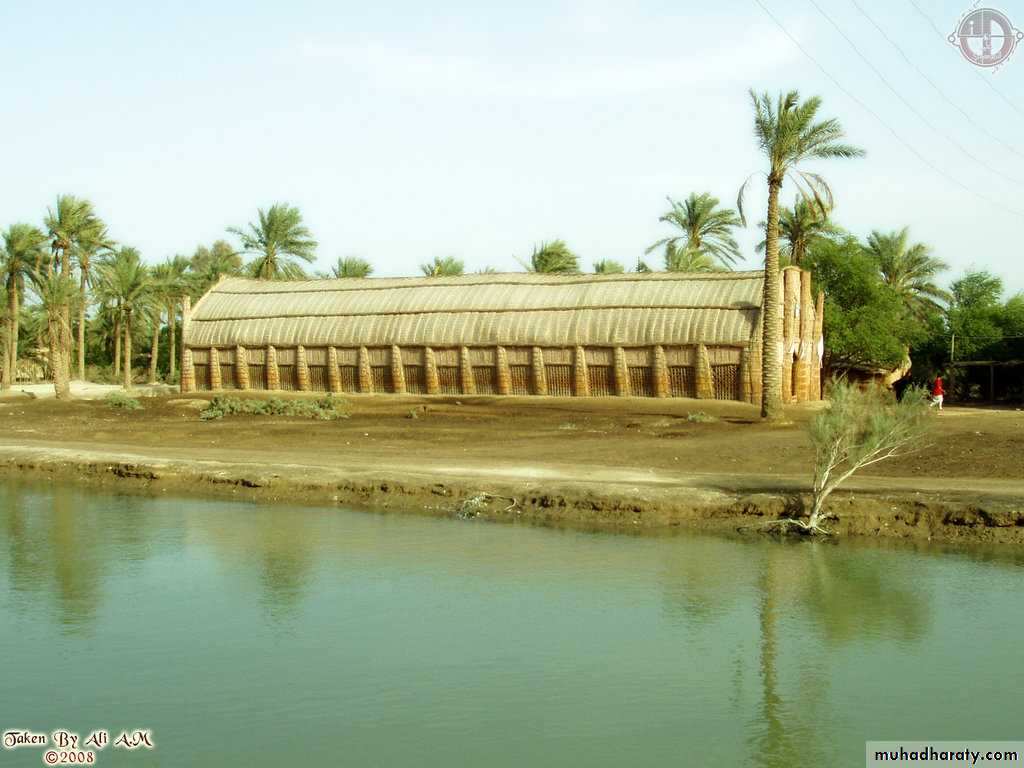