Is a disorder of protein metabolism in which there is an extracellular deposition of pathological insoluble fibrillar proteins in organs and tissues. Characteristically, the amyloid protein consist of B-pleated sheets that are responsible for its insolubility and resistance to proteolysis. 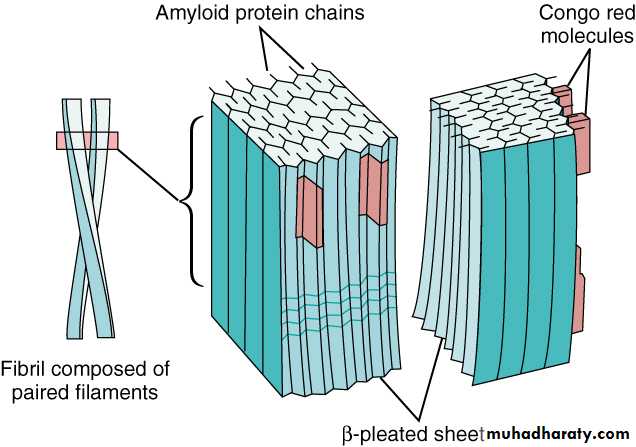 Amyloidosis can be acquired or inherited. Classification is based on the nature of precursor of plasma protein( at least 20) that form the fibrillar deposit. The process for the production of the fibrils appears to be multifactorial and differs amongst the various types of amyloid.

This disease was named by Virchow in 1854 on the basis of color after staining with iodine &sulfuric acid.

amyloid proteins can be deposited locally or can involve virtually every organ system of the body.

Amyloid fibril deposition may have no clinical consequences or may lead to severe pathophysiological changes. Often the disease falls between these two extremes.

Regardless the etiology, the clinical diagnosis of amyloidosis is usually not made until the disease is far advanced.

The clinical manifestations of amyloidosis depends on the organ(s) affected.

The diagnosis of amyloidosis should be considered in all cases of unexplained nephrotic syndrome, cardiomyopathy, &peripheral neuropathy.

These are due to amyloid formed from serum amyloid A(SAA), which is an acute phase protein. It is, therefore, related to chronic inflammatory disorders and chronic infections.

In developing countries it is still associated with infectious diseases such as tuberculosis, bronchiectasis and osteomyelitis. AA amyloidosis often presents with chronic kidney disease, with hepatomegaly and splenomegaly. Macroglossia is not a feature and cardiac involvement is rare.

The degree of renal failure correlates with SAA level in a more favourable out come in patients with low normal levels.

This is due to B2- microglobulin producing amyloid fibrils in chronic dialysis patients. It frequently presents with carpal tunnel syndrome. It occurs 5-10 years after dialysis.

Usually asymptomatic& occurs in patients over the age of 70 years.

2-Familial(hereditary)amyloidosis: these are autosomally dominant transmitted diseases where the mutant protein forms amyloid fibrils, starting usually in the middle age.
.

Examples include disorders such as familial amyloidosis polyneuropathy (FAP), cardiomyopathy or the nephrotic syndrome. Major foci of FAP occur in Portugal, japan and Sweden.

Deposits of amyloid fibril of various types can be localized to various organs or tissues( skin, heart or brain).

The brain is a common site of amyloid deposition.

Intracerebral and cerebrovascular amyloid deposits are seen in Alzheimer’s disease

the diagnosis is established by biopsy which may be of an affected organ , rectum or subcutaneous fat.

The pathognomonic histological feature is apple-green birefringence of amyloid deposits when stained with Congo red dye and viewed under polarized light. 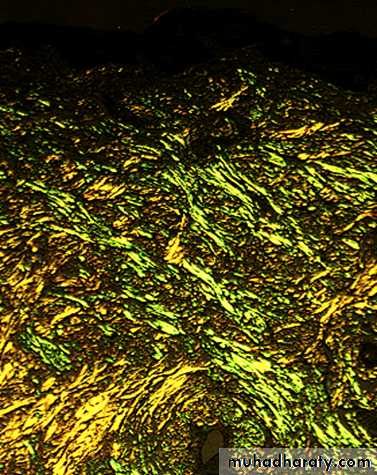 the aims of treatment are to support the function of the affected organ and in acquired amyloidosis to prevent further amyloid deposition through treatment of the primary cause.

Genetic counseling is an important aspect of treatment in heredofamilial amyloidosis.

Liver transplantation had been carried out since 1990 for patients with familial amyloid- polyneuropathy(FAP).

Recent trials have indicated that a prednisolone/melphalan/

Colchicine's program can prolongs the life.

these disorders are chronic and usually irreversible

incidence: 5%-7% of population, higher frequencies in women, increases with age

This is the process by which the immune system distinguishes self from foreign tissues.

Central tolerance occurs during lymphocyte development in the thymus and bone marrow.

T&B lymphocytes that recognize self antigens are deleted before they develop into fully immunocompetent cells.

inevitably evade deletion &escaping to the peripheral circulation. These cells are controlled through peripheral tolerance mechanisms.

These include the suppression of autoreactive cells by 'regulatory' T-cells& the generation of the hyporesponsivness 'anergy‘ in lymphocytes.

Failure of any of these

tolerance mechanisms may result in the development of autoimmune disease.

Both genetic and environmental factors contribute to the development of autoimmune disease.

The most important genetic determinants of autoimmune susceptibility are the HLA genes,

reflecting there importance in shaping of lymphocyte responses.

The most widely studied of these is infection, as occurs in acute rheumatic fever fallowing streptococcal infection or reactive arthritis fallowing bacterial
infection.

A number of mechanisms have been postulated including cross- reactivity between the infectious pathogen and self determinants(molecular mimicry),

and release of sequestered antigens

which are not usually visible to the immune system from damaged tissue.

Occasionally the development of autoimmune disease is a side effect of drug treatment, for example:

the metabolic products of the anesthetic drug halothane bind to liver enzymes, resulting in a structurally novel protein.

This is recognized as new(foreign) 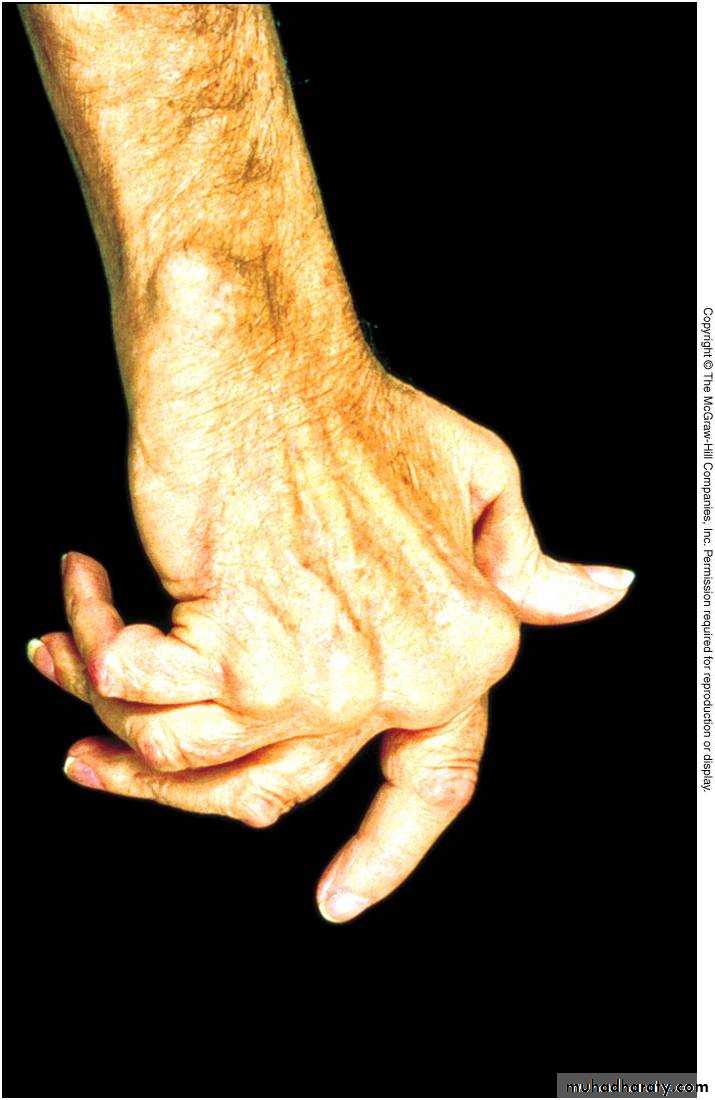 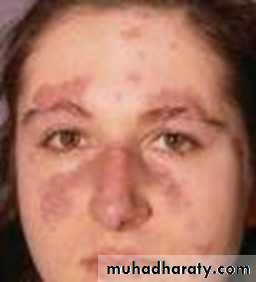 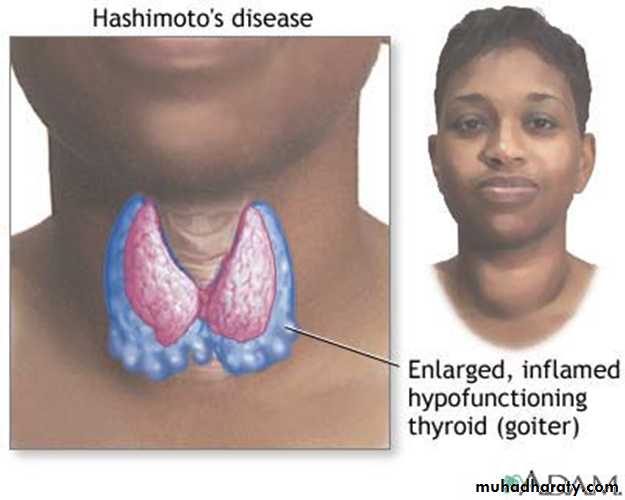