NOSE
Inflammation:
Infectious rhinitis: the more elegant way of saying “common cold,” is in most instances caused by one or more viruses.
Allergic rhinitis.
(hay fever) is initiated by hypersensitivity reactions to one of a large group of allergens, most commonly the plant pollens.
It is an IgE–mediated immune reaction (Type I) Hypersensitivity”
Nasal polyps:
It is focal protrusion of the mucosa, due to recurrent attacks of rhinitis, Microscopically:
consists of edematous stroma,
hyperplastic or cystic mucous glands,
infiltrated by variety of inflammatory cells including neutrophils, eosinophils, and plasma cells with occasional clusters of lymphocytes.
Complication:
When multiple or large it may encroach on the airway and impair sinus drainage. They are of two types; inflammatory and allergic. 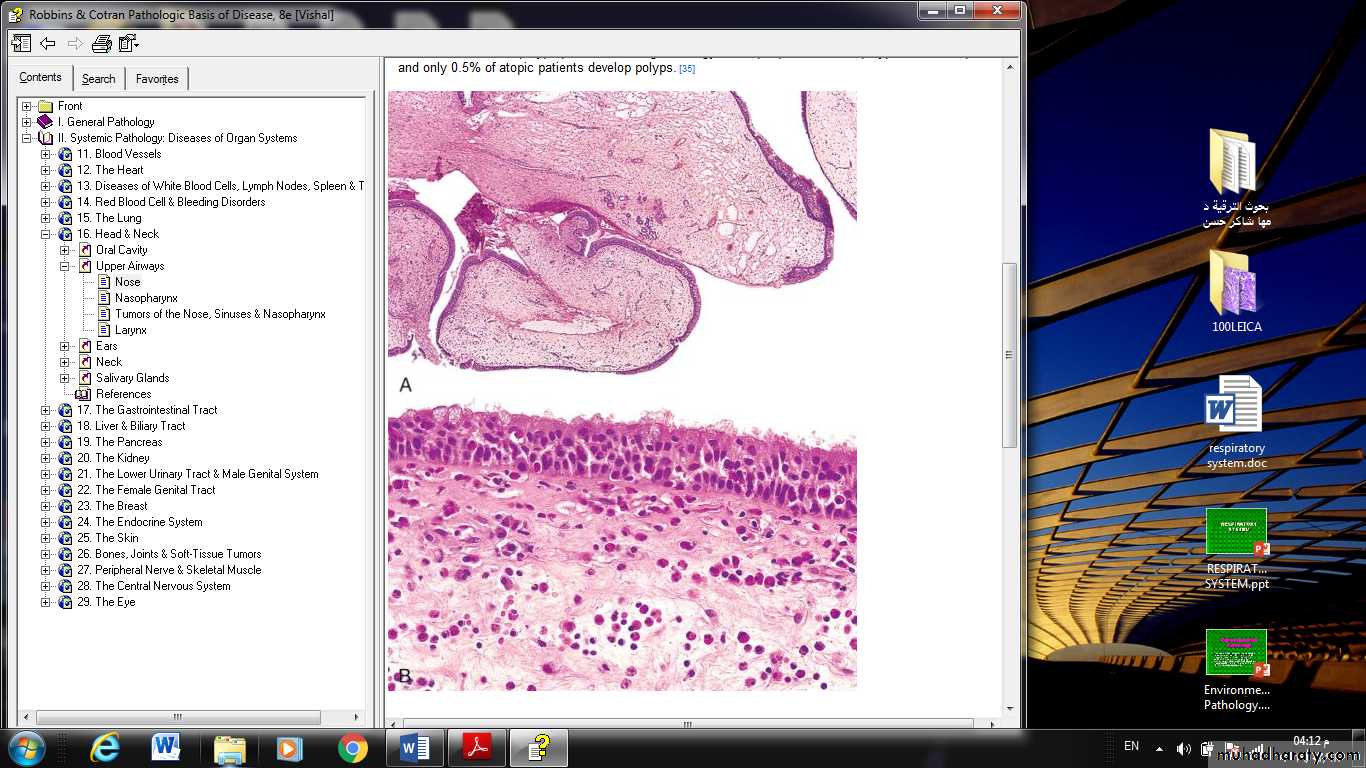 FIGURE : Nasal polyps : A, showing edematous masses lined by epithelium. B, High-power view showing edema and eosinophil-rich inflammatory infiltrate.
Sinusitis.
Acute sinusitis is most commonly preceded by acute or chronic rhinitis. Impairment of drainage of the sinus by inflammatory edema of the mucosa is an important contributor to the process and, when complete, may impound the suppurative exudate, producing empyema of the sinus. Obstruction of the outflow, occasionally leads to an accumulation of mucous secretions in the absence of direct bacterial invasion, producing a so-called mucocele. Acute sinusitis may, in time, give rise to chronic sinusitis.
Uncommonly, sinusitis is a component of Kartagener syndrome, which also includes bronchiectasis and situs inversus. All these features are secondary to defective ciliary action.
Complications of sinusitis: osteomyelitis, septic thrombophlebitis of a dural venous sinus.
NASOPHARYNX
Inflammations:
Pharyngitis and tonsillitis are frequent in the usual viral upper respiratory infections.
Bacterial infections may be superimposed on these viral involvements, or may be primary invaders. The most common offenders are the β-hemolytic streptococci, but sometimes Staphylococcus aureus or other pathogens may be implicated.
The inflamed nasopharyngeal mucosa may be covered by an exudative membrane (pseudo-membrane). A typical appearance is of enlarged, reddened tonsils (due to reactive lymphoid hyperplasia) dotted by pinpoints of exudate emanating from the tonsillar crypts, so-called follicular tonsillitis.
The major importance of streptococcal “sore throats” lies in the possible development of late sequelae, such as, rheumatic fever and glomerulonephritis.

Tumors of the Nose, Sinuses, and Nasopharynx 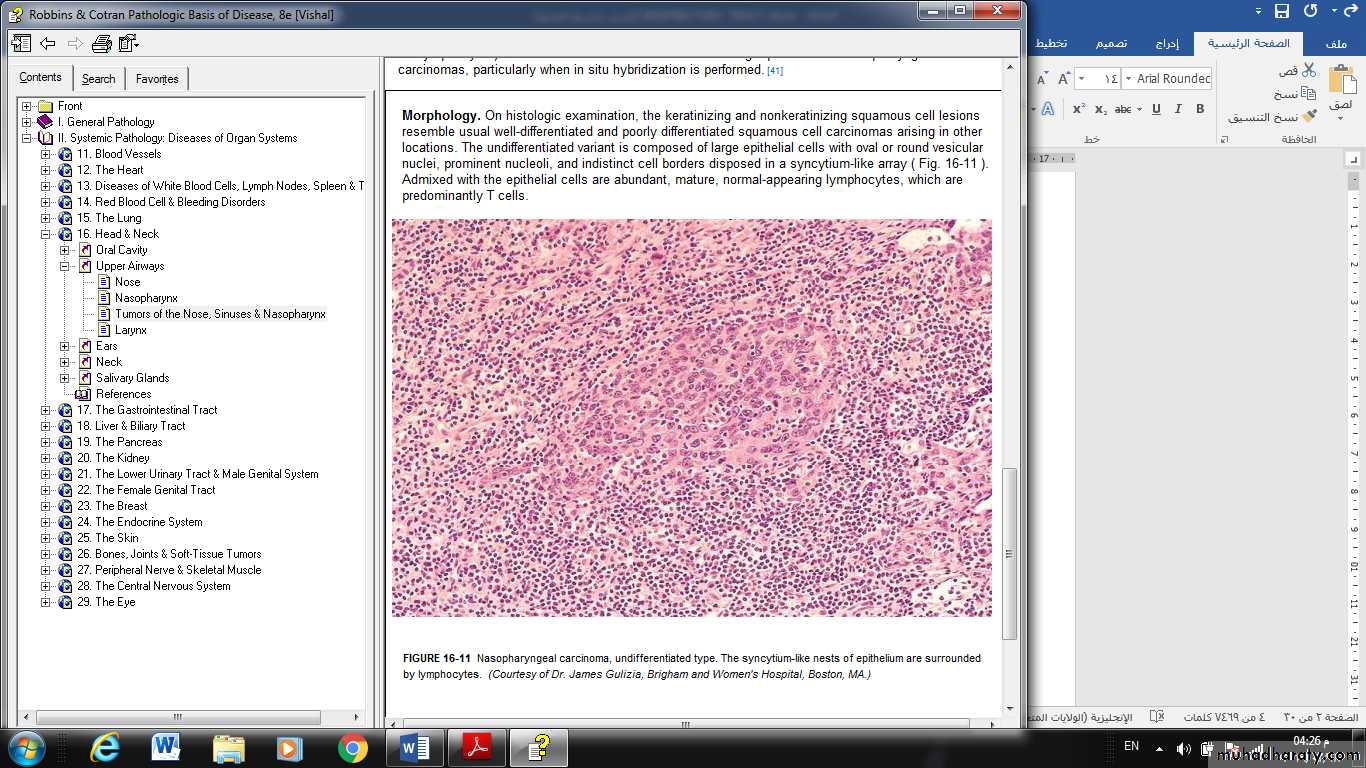 FIGURE : Nasopharyngeal carcinoma, undifferentiated type. The syncytium-like nests of epithelium are surrounded by lymphocytes.
LARYNX
Reactive nodules (vocal cord nodules and polyps).
Reactive nodules, also called polyps, sometimes develop on the vocal cords, most often in heavy smokers or in individuals who impose great strain on their vocal cords (singers' nodules).
By convention, singers' nodules are bilateral lesions and polyps are unilateral.
Adults, predominantly men, are most often affected.
Morphology
Gross:
These nodules are smooth, rounded, sessile or pedunculated excrescences,
generally only a few millimeters in the greatest dimension,
located usually on the true vocal cords.

They are typically covered by squamous epithelium that may become keratotic, hyperplastic, or even slightly dysplastic.
The core of the nodule is a loose myxoid connective tissue.
Because of their strategic location and accompanying inflammation, they characteristically change the character of the voice and often cause progressive hoarseness. They virtually never give rise to cancers.
SQUAMOUS PAPILLOMA AND PAPILLOMATOSIS
Laryngeal squamous papillomas are benign neoplasms, usually located on the true vocal cords, that form soft, raspberry-like excrescences rarely more than 1 cm in diameter.
On histologic examination, the papillomas are made up of multiple slender, finger-like projections supported by central fibrovascular cores and covered by an orderly stratified squamous epithelium.
The lesions are caused by HPV types 6 and 11.
They do not become malignant, but frequently recur. They often spontaneously regress at puberty.
CARCINOMA OF THE LARYNX
A spectrum of epithelial alterations is seen in the larynx. They range from hyperplasia, atypical hyperplasia, dysplasia, carcinoma in situ, to invasive carcinoma.
There are all gradations of epithelial hyperplasia of the true vocal cords, and the likelihood of the development of an overt carcinoma is directly proportional to the level of atypia when the lesion is first seen.
factors that contribute to increased risk include:
The various changes described are most often related to tobacco smoke, the risk being proportional to the level of exposure. Indeed, up to the point of frank cancer, the changes often regress after cessation of smoking.
Alcohol is also clearly a risk factor. Together smoking and alcohol increase the risk substantially.
Other factors that may contribute to increased risk include nutritional factors, exposure to asbestos, irradiation, and infection with HPV.
Morphology. About 95% of laryngeal carcinomas are typical squamous cell tumors. The tumor usually develops directly on the vocal cords, but it may arise above or below the cords. 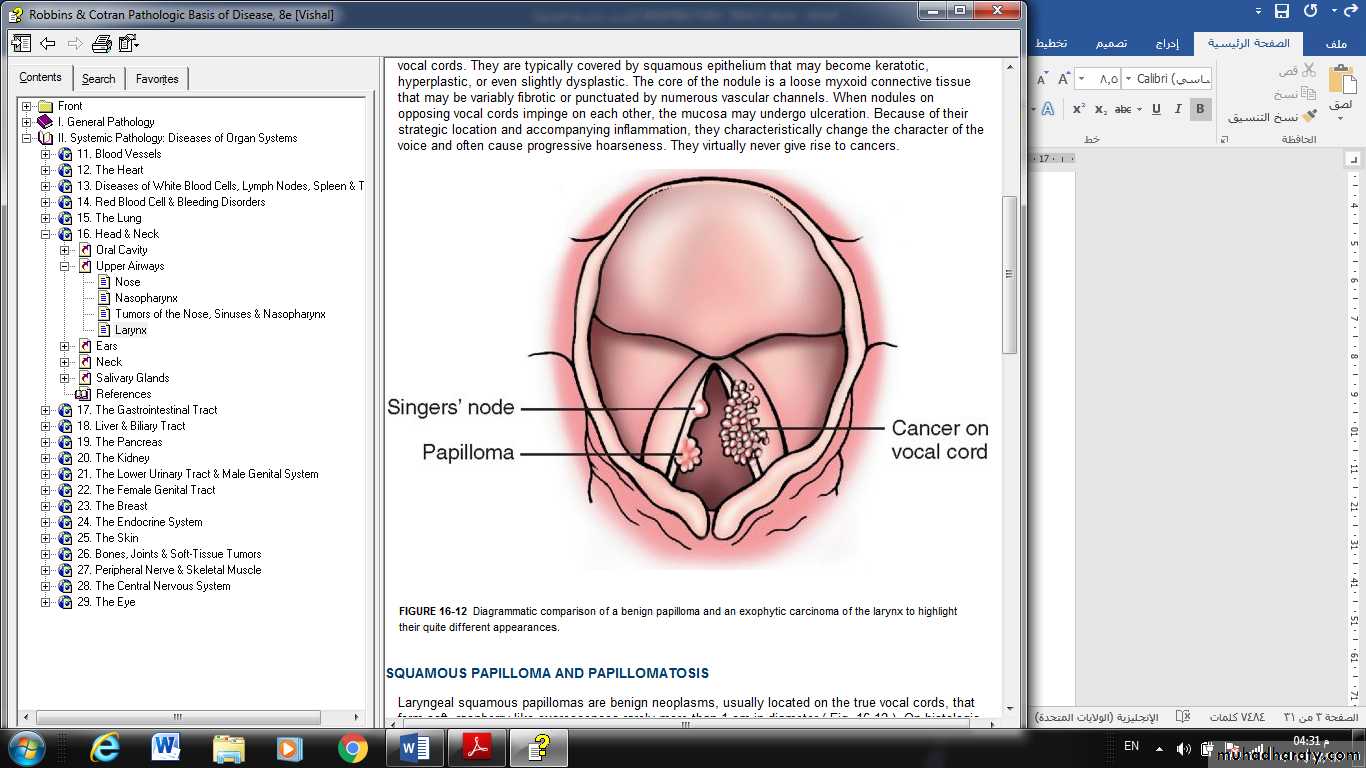 FIGURE : Diagrammatic comparison of a benign papilloma and an exophytic carcinoma of the larynx to highlight their quite different appearances. 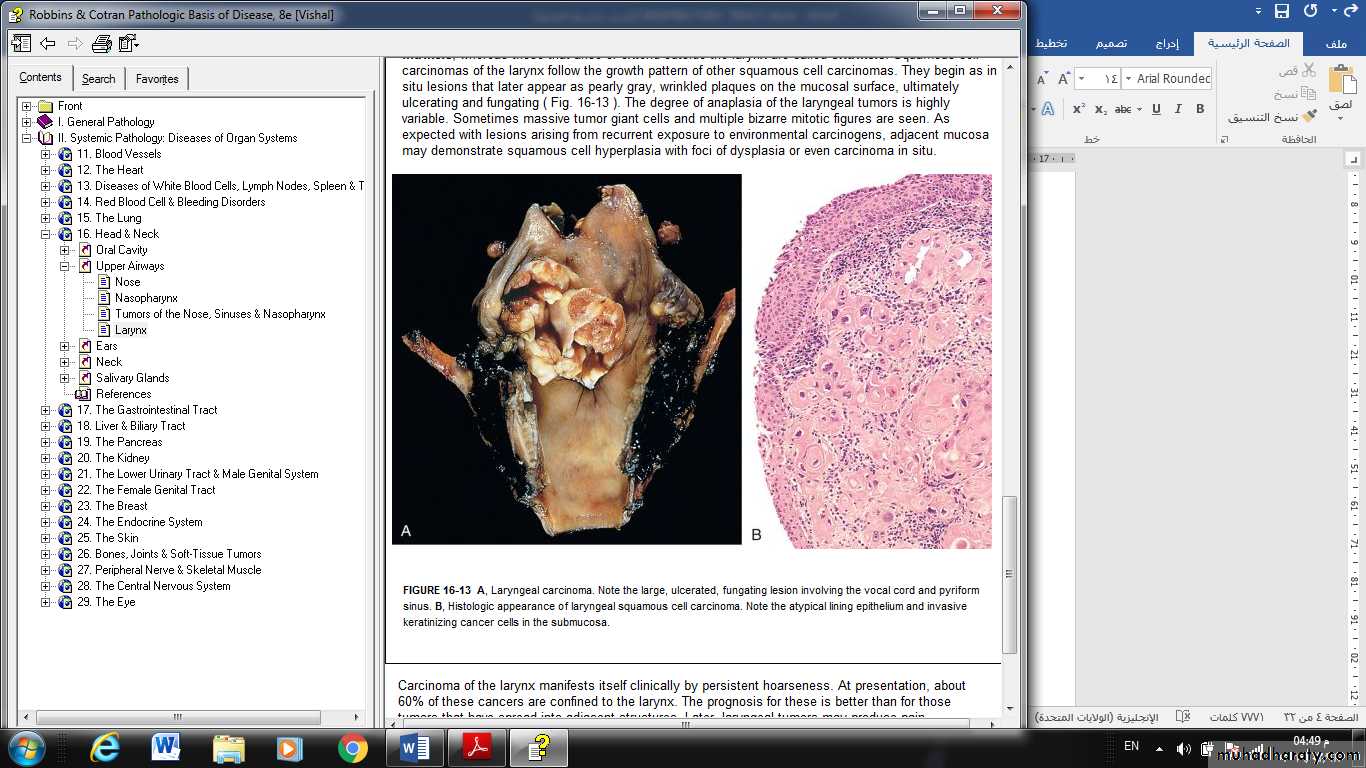