LUNGS
Congenital Anomalies
Developmental defects of the lung include the following:
-Agenesis or hypoplasia of both lungs, one lung, or single lobes
-Tracheal and bronchial anomalies (atresia, stenosis, tracheoesophageal fistula)
- Vascular anomalies
- Congenital lobar overinflation (emphysema)
-Foregut cysts
- Congenital pulmonary airway malformation
- Pulmonary sequestrations
Pulmonary hypoplasia. is the defective development of both lungs resulting in:
Decreased weight, volume, and acini compared to the body weight and gestational age
Foregut cysts represent an abnormal detachment of primitive foregut and are most often located in the hilum of middle mediastinum.
Pulmonary sequestration refers to the presence of a discrete mass of the lung tissue without any normal connection to the airway system. 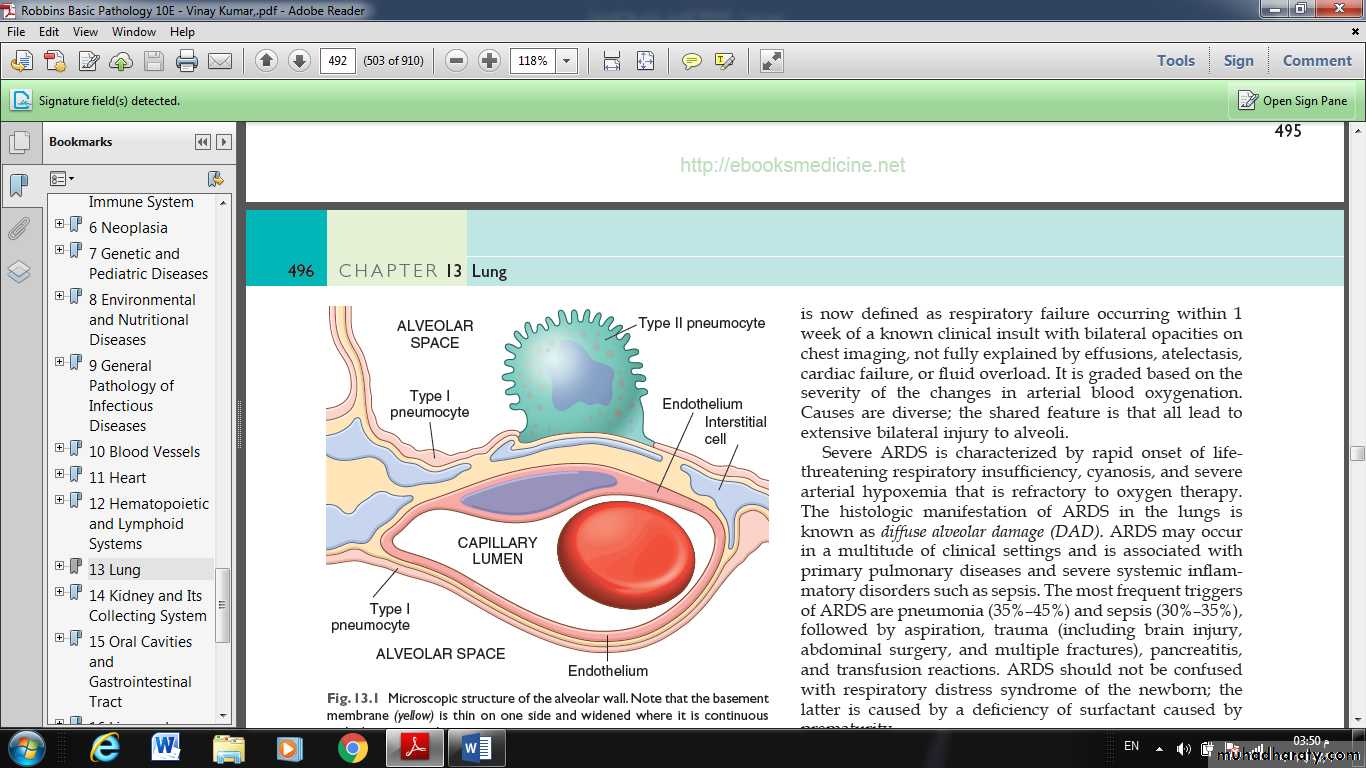 Fig.: Microscopic structure of the alveolar wall. Note that the basement membrane (yellow) is thin on one side and widened where it is continuous with the interstitial space.

Atelectasis, also known as collapse, is loss of lung volume caused by inadequate expansion of air spaces. It results in shunting of inadequately oxygenated blood from pulmonary arteries into veins, thus giving rise to a ventilation perfusion imbalance and hypoxia. On the basis of the underlying mechanism and the distribution of alveolar collapse, atelectasis is classified into three forms
• Resorption atelectasis occurs when an obstruction prevents air from reaching distal airways. Any air present gradually becomes absorbed, and alveolar collapse follows. The most common cause of resorption collapse is obstruction of a bronchus. Resorption atelectasis most frequently occurs postoperatively due to intrabronchial mucous or mucopurulent plugs, but also may result from foreign body aspiration (particularly in children), bronchial asthma, bronchiectasis, chronic bronchitis, or intrabronchial tumor, in which it may be the first sign of malignancy.
• Compression atelectasis is usually associated with accumulation of fluid, blood, or air within the pleural cavity. A frequent cause is pleural effusions occurring in the setting of congestive heart failure. Leakage of air into the pleural cavity (pneumothorax) also leads to compression atelectasis. Basal atelectasis resulting from a failure to breathe deeply commonly occurs in bedridden patients, in patients with ascites, and during and after surgery.
• Contraction atelectasis (or cicatrization atelectasis) occurs when local or diffuse fibrosis affecting the lung or the pleura hamper lung expansion.
Atelectasis (except when caused by contraction) is potentially reversible and should be treated promptly to prevent hypoxemia and superimposed infection of the collapsed lung.
ACUTE RESPIRATORY DISTRESS SYNDROME
It is defined as respiratory failure occurring within 1 week of a known clinical insult with bilateral opacities on chest imaging, not fully explained by effusions, atelectasis, cardiac failure, or fluid overload.
Severe ARDS is characterized by rapid onset of life threatening respiratory insufficiency, cyanosis, and severe arterial hypoxemia that is refractory to oxygen therapy.
The histologic manifestation of ARDS in the lungs is known as diffuse alveolar damage (DAD).
Causes are diverse; all lead to extensive bilateral injury to alveoli.
The most frequent triggers of ARDS are pneumonia (35%–45%)
and sepsis (30%–35%),
followed by aspiration, trauma (including brain injury, abdominal surgery, and multiple fractures), pancreatitis, and transfusion reactions.
ARDS should not be confused with respiratory distress syndrome of the newborn; the latter is caused by a deficiency of surfactant caused by prematurity.
Pathogenesis
In ARDS, the integrity of the alveolar-capillary membrane is compromised by endothelial and epithelial injury. Most work suggests that ARDS stems from an inflammatory reaction initiated by a variety of pro-inflammatory mediators.
MORPHOLOGY
In the acute phase of ARDS, the lungs are dark red, firm, airless, and heavy.
Microscopic examination reveals:
capillary congestion,
necrosis of alveolar epithelial cells,
interstitial and intraalveolar edema and hemorrhage,
and (particularly with sepsis) collections of neutrophils in capillaries.
The most characteristic finding is the presence of hyaline membranes, particularly lining the distended alveolar ducts. Such membranes consist of fibrin-rich edema fluid admixed with remnants of necrotic epithelial cells.
In the organizing stage, type II pneumocytes proliferate vigorously in an attempt to regenerate the alveolar lining. Resolution is unusual; more commonly, the fibrin-rich exudates organize into intraalveolar fibrosis. Marked thickening of the alveolar septa ensues due to proliferation of interstitial cells and deposition of collagen. 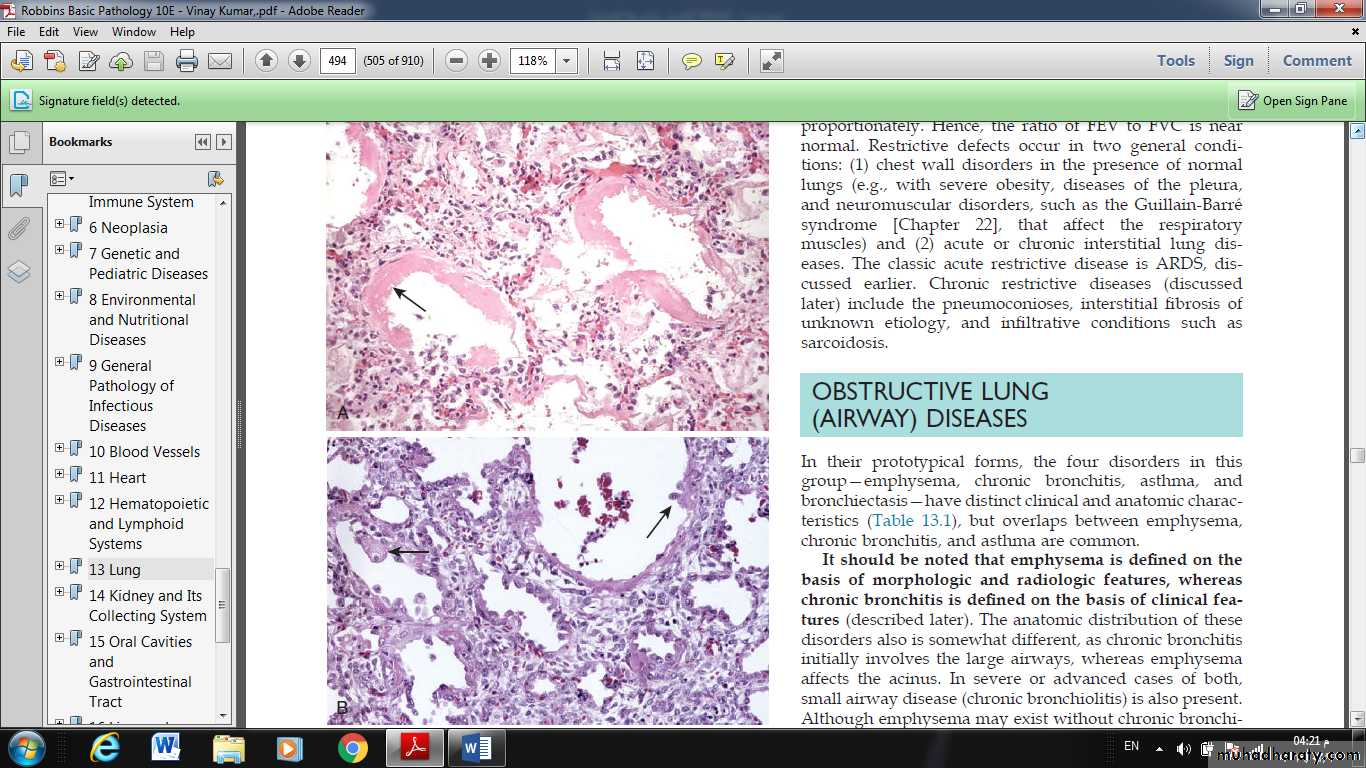 Fig. Acute lung injury and acute respiratory distress syndrome. (A) Diffuse alveolar damage in the acute phase. Some alveoli are collapsed, while others are distended; many are lined by bright pink hyaline membranes (arrow). (B) The healing stage is marked by resorption of hyaline membranes and thickening of alveolar septa by inflammatory cells, fibroblasts, and collagen. Numerous reactive type II pneumocytes also are seen at this stage (arrows), associated with regeneration and repair.

Depending on the pulmonary function test pulmonary diseases can be classified into two categories:
Obstructive diseases (OPD), characterized by an increase in resistance to airflow owning to partial or complete obstruction at any level of respiratory tract.
FVC: normal or slightly decreased.
FEV: significantly decreased.
Forced expiratory volume (FEV): measure how much air person can exhale during a forced breath , can measured during 1st, 2nd, and/or 3rd second of breath.
Forced vital capacity (FVC):It is total amount of air that can be forcibly exhale from the lungs after taking deepest breath in FEV test.

restrictive diseases (RPD), reduce expansion of the lung parenchyma, with reduce total lung capacity.
FVC: reduced
FEV: normal or reduced
Total lung capacity: maximum amount of air that can full the lungs.
Examples of restrictive diseases:
Usual interstitial pneumonia (idiopathic pulmonary fibrosis)
Pneumoconiosis
Sarcoidosis
Obstructive diseases (OPD):
emphysema.
Chronic bronchitis.
Asthma.
And broncheactasis.
EMPHYSEMA
It is a condition of the lung characterized by abnormal permanent enlargement of the airspaces distal to the terminal bronchioles, accompanied by destruction of their walls and without obvious fibrosis.
♦ overinflation: enlargement of the airspaces unaccompanied by destruction.
TYPES:
According to the anatomic distribution in the lobule:
centriacinar.
Panacinar.
Paraseptal.
Irregular.
1- CENTRIACINAR EMPHYSEMA:
involve the central or proximal parts of the acini (formed by the respiratory bronchioles ), sparing the distal part.
More common in the upper lobes.
The wall often contains large amount of black pigment.
It occurs predominantly in heavy smokers, often in association with chronic bronchitis.

the acini are uniformly enlarged from the level of the respiratory bronchiole to the terminal blind alveoli.
More commonly in the lower zone of the lung, and most severe in the bases.
Associated with alpha1 antitrypsin deficiency.
3- DISTAL ACINAR E.:
the distal part is predominantly involved.
Occur adjacent to the areas of fibrosis, scarring, or atelactasis.
Usually more severe in the upper part of the lung.
4- Airspaces enlargement with fibrosis (irregular emphysema):
acinus irregularly involved.
Almost invariably associated with scarring.
Usually asymptomatic and insignificant.
PATHOGENESIS:
For the destruction of the alveolar walls the most plausible hypothesis is the:
◘ protease antiprotease mechanism aided by
◘ oxidant-antioxidant imbalance.
Alveolar wall destruction result from an imbalance between protease (mainly elastase) and antiprotease in the lung. This theory based on important observations; the homozygous patients with a deficiency of protease inhibitor(α1-AT) have markedly enhanced tendency to develop pulmonary emphysema.
This theory also explains the deleterious effect of cig. Smoking both increased elastase availability and decreased antielastase activity occur in smokers.
Smoking also cause oxidant- antioxidant imbalance, tobacco smoke contains abundant amount of free radicals (reactive oxygen species which deplete antioxidant mechanisms in the lung, thereby inciting tissue damage.
MORPHOLOGY:
GROSS: voluminous lungs, large blebs or bullae may be seen.
MIC: there are abnormally large alveoli separated by thin septa, there are even larger abnormal airspaces. Often the respiratory bronchioles and vasculature of the lung deformed and compressed. 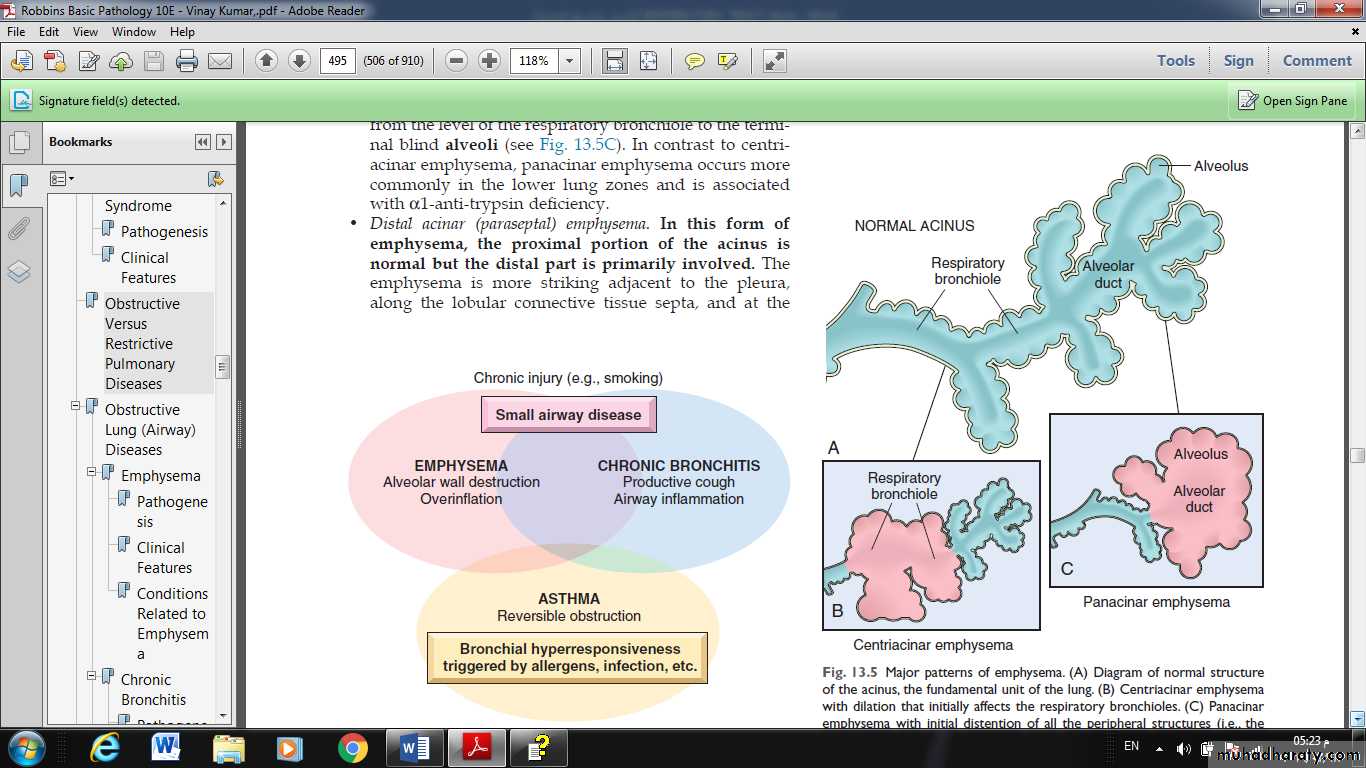 Fig. Major patterns of emphysema. (A) Diagram of normal structure of the acinus, the fundamental unit of the lung. (B) Centriacinar emphysema with dilation that initially affects the respiratory bronchioles. (C) Panacinar emphysema with initial distention of all the peripheral structures (i.e., the alveolus and alveolar duct); the disease later extends to affect the respiratory bronchioles. 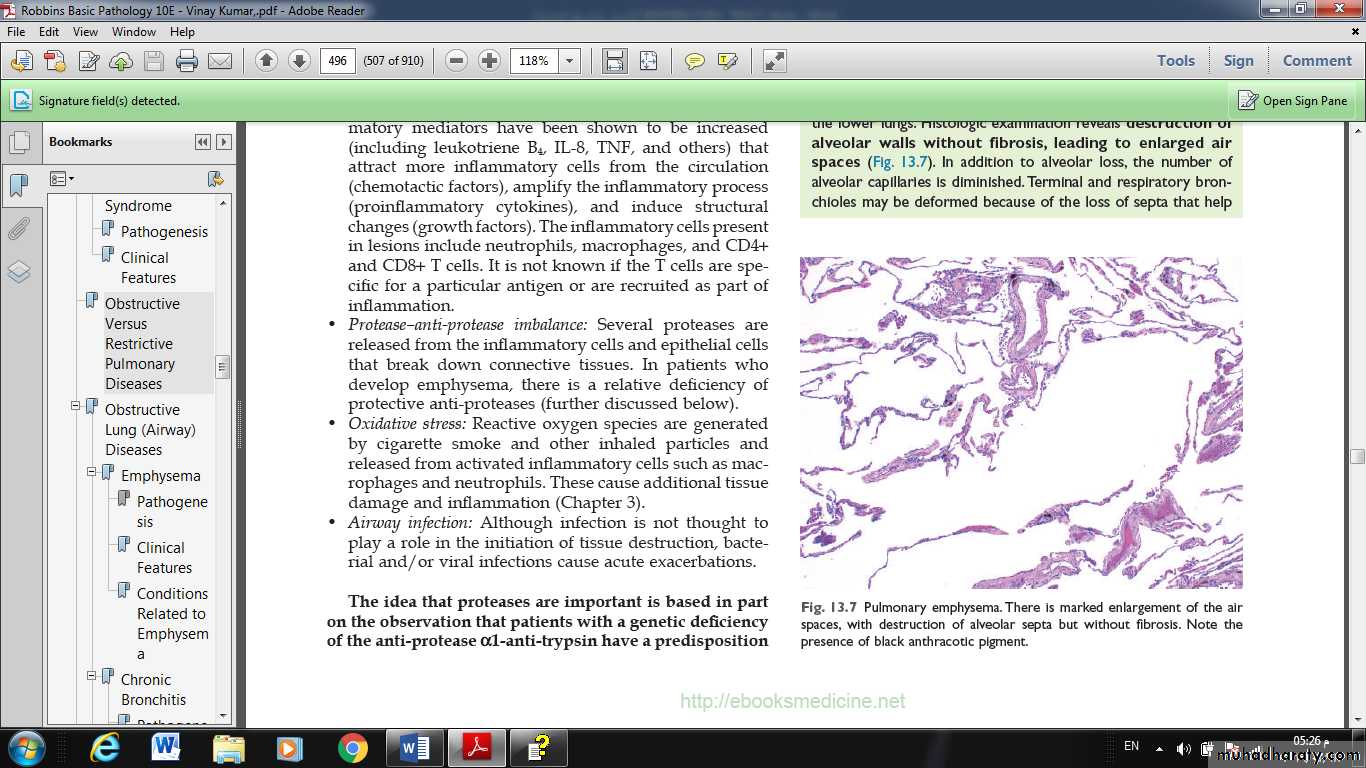 Fig. Pulmonary emphysema. There is marked enlargement of the air spaces, with destruction of alveolar septa but without fibrosis. Note the presence of black anthracotic pigment.

• Compensatory emphysema describes the dilation of residual alveoli in response to loss of lung substance elsewhere, such as occurs after surgical removal of a diseased lung or lobe.
• Obstructive overinflation refers to expansion of the lung due to air trapping. A common cause is subtotal obstruction of an airway by a tumor or foreign object.
• Bullous emphysema refers to any form of emphysema that produces large subpleural blebs or bullae (spaces >1 cm in diameter in the distended state) most often the blebs are subpleural, and on occasion they may rupture, leading to pneumothorax.
• Mediastinal (interstitial) emphysema is caused by entry of air into the interstitium of the lung, from where it may track to the mediastinum and sometimes the subcutaneous tissue. When the interstitial air gets into the subcutaneous tissue, the patient may literally blow up like a balloon, with marked swelling of the head and neck and crackling crepitation over the chest (subcutaneous emphysema). In most instances the air is resorbed spontaneously after the site of entry seals.
Causes:
Vomiting, violent coughing, whooping cough, and perforating injury (e.g., a fractured rib). 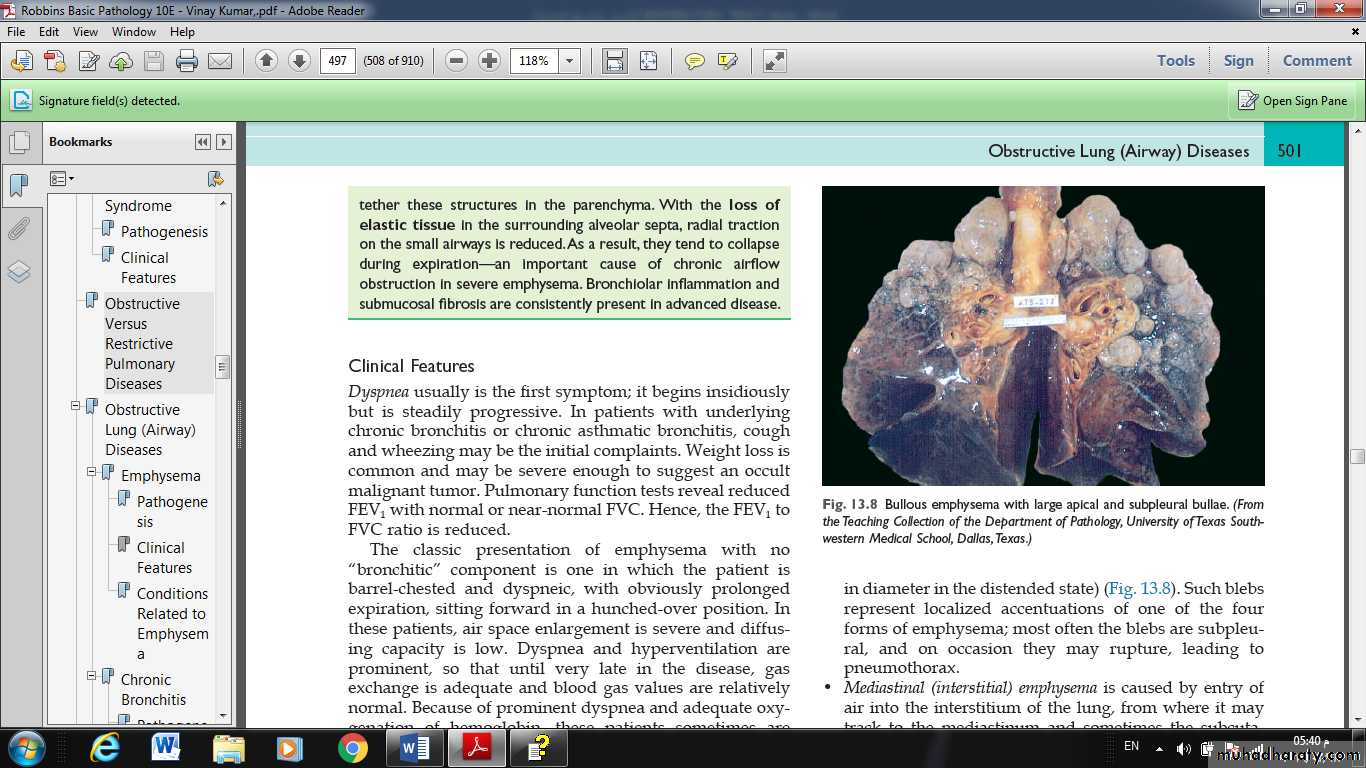