For instance, within 3 to 5 seconds it can increase the heart rate to twice normal, and within 10 to 15 seconds the arterial pressure can be doubled; or, at the other extreme, the arterial pressure can be decreased low enough within 10 to 15 seconds to cause fainting. Sweating can begin within seconds, and the urinary bladder may empty involuntarily, also within seconds.
General Organization of the Autonomic Nervous System
The autonomic nervous system is activated mainly by centers located in the spinal cord, brain stem, and hypothalamus. Also, portions of the cerebral cortex, especially of the limbic cortex, can transmit signals to the lower centers and in this way influence autonomic control.
The autonomic nervous system also often operates by means of visceral reflexes. That is, subconscious sensory signals from a visceral organ can enter the autonomic ganglia, the brain stem, or the hypothalamus and then return subconscious reflex responses directly back to the visceral organ to control its activities.
The efferent autonomic signals are transmitted to the various organs of the body through two major subdivisions called the sympathetic nervous system and the parasympathetic nervous system.

The postganglionic sympathetic neuron thus originates either in one of the sympathetic chain ganglia or in one of the peripheral sympathetic ganglia. From either of these two sources, the postganglionic fibers then travel to their destinations in the various organs.
Segmental Distribution of the Sympathetic Nerve Fibers.
The sympathetic pathways that originate in the different segments of the spinal cord are not necessarily distributed to the same part of the body as the somatic spinal nerve fibers from the same segments. Instead, the sympathetic
fibers from cord segment T-1 generally pass up the sympathetic chain to terminate in the head; from T-2 to terminate in the neck; from T-3, T-4, T-5, and T-6 into the thorax; from T-7, T-8, T-9, T-10, and T-11 into the abdomen; and from T-12, L-1, and L-2 into the legs. This distribution is only approximate and overlaps greatly.

Effects of Sympathetic and Parasympathetic Stimulation on Specific Organs 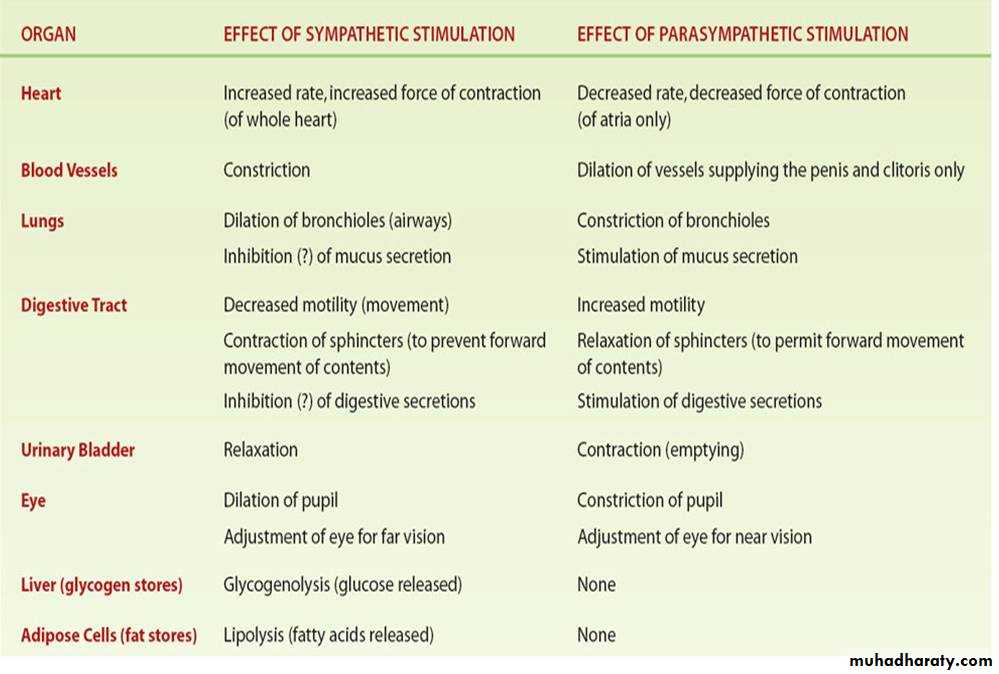 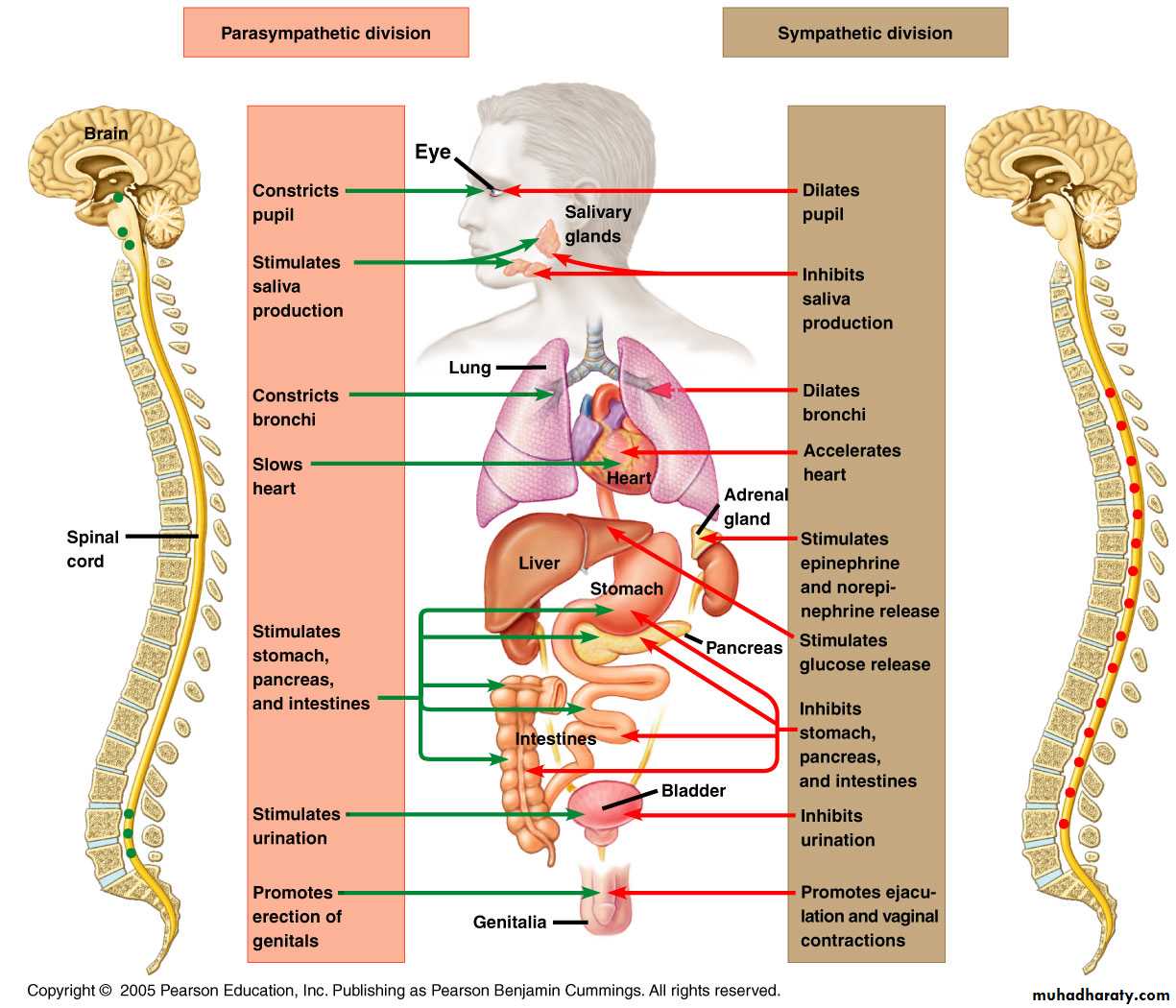 Many visceral functions of the body are regulated by autonomic reflexes.
Cardiovascular Autonomic Reflexes:
Several reflexes in the cardiovascular system help to control especially the arterial blood pressure and the heart rate. One of these is the baroreceptor reflex. Briefly, stretch receptors called baroreceptors are located in the walls of several major arteries, including especially the internal carotid arteries and the arch of the aorta.
When these become stretched by high pressure, signals are transmitted to the brain stem, where they inhibit the sympathetic impulses to the heart and blood vessels and excite the parasympathetics; this allows the arterial pressure to fall back toward normal.
Gastrointestinal Autonomic Reflexes.
The uppermost part of the gastrointestinal tract and the rectum are controlled principally by autonomic reflexes. For instance, the smell of appetizing food or the presence of food in the mouth initiates signals from the nose and mouth to the vagal, glossopharyngeal, and salivatory nuclei of the brain stem. These in turn transmit signals through the parasympathetic nerves to the secretory glands of the mouth and stomach, causing secretion of digestive juices sometimes even before food enters the mouth.
When fecal matter fills the rectum at the other end of the alimentary canal, sensory impulses initiated by stretching the rectum are sent to the sacral portion of the spinal cord, and a reflex signal is transmitted back through the sacral parasympathetics to the distal parts of the colon; these result in strong peristaltic contractions that cause defecation.
Other Autonomic Reflexes.
Emptying of the urinary bladder is controlled in the same way as emptying the rectum; stretching of the bladder sends impulses to the sacral cord, and this in turn causes reflex contraction of the bladder and relaxation of the urinary sphincters, thereby promoting micturition.
Also important are the sexual reflexes, which are initiated both by psychic stimuli from the brain and by stimuli from the sexual organs. Impulses from these sources converge on the sacral cord and, in the male, result first in erection, mainly a parasympathetic function, and then ejaculation, partially a sympathetic function.