Tissue coccidian parasite
Toxoplasma gondii (Toxoplasmosis)
Toxoplasma gondii is an obligate intra-cellular parasite. T. gondii is word wide in distribution and infects a large variety of mammals and birds. Human infections can be congenital or acquired at any age after birth. T. gondii infection can be acute or chronic and symptomatic or asymptomatic.
Morphology :
Oocyst: Oocysts are spherical or ovoid, about 10-15 µm × 8-12 µm in size and contain a sporoblast. Oocysts reach the external environment through cat faeces. They mature within 2-3 days. During maturation or sporulation, the sporoblast develops into 2 sporocysts. The mature oocysts contain 2 sporocysts, each with 4 sporozoites. These oocysts are relatively resistant to a variety of chemicals and will remain infective in the soil for at least 1 year. 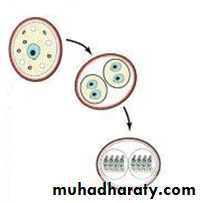 Maturation or sporulation of oocyst in external environment : the sporoblast develops into 2 sporocysts. The mature oocysts contain 2 sporocysts, each with 4 sporozoites.

Trophozoite (endozoite, tachyzoites , zoites): the intracellular trophozoite or proliferative form usually seen during acute infection. The trophozoites are crescentic in shape, and with one end more pointed than the other. Evident in in Giemsa-stained preparation of various types of smears are a delicate azure cytoplasm and a reddish spherical or ovoidal nucleus which is usually nearer the blunter end of the parasite. Trophozoites are either single or in masses (pseudocyst).

Bradyzoite: similar to the tachyzoites but it is less active metabolically. bradyzoites are smaller than tachyzoites. They multiply at a slow rate (by endodyogeny) and are antigenically distinct from tachyzoites.

Pseudocyst : contain tachyzoites and produces only in acute phase . 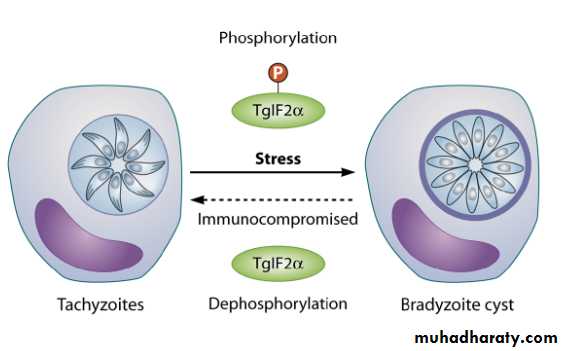 This cycle is associated with formation of oocysts. Oocysts are the products of sexual multiplication and are produced only in the intestinal cats (and other feline animals) – the definitive hosts. Oocysts can infect cats (they can also infect intermediate hosts). On reaching the intestine of cats, the sporozoites are liberated. These sporozoites penetrate the intestinal mucosal cells. They multiply asexually (endopolygeny = shizogony) to form endozoites (called tachyzoites). After some cycles of multiplication in the intestinal cells, gametogony (sexual multiplication) is initiated. Micro-gametocytes and macro-gametocytes are produced during gametogony. These form gametes. A micro- and a macro-gamete unite with each other to form a zygote(syngamy). Zygote converts into an oocyst to complete a part of the feline cycle.
The formation of tissue cysts (true cyst) in cats constitutes the other part of feline cycle. some endozoites produced during endopolygeny, enter extra-intestinal tissues rather than infecting new intestinal cells. These endozoites ultimately lead to formation of tissue cysts. The life cycle of T. gondii can also continue when the infected cat is consumed by other animals or birds.
Feline –non feline cycle
In this cycle non feline intermediate host is infected by oocysts through contaminated food or water. the intermediate hosts are human , birds and animals . Sporozoites are liberated from the oocysts in the intestines of intermediate hosts. They penetrate and multiply in the intestinal mucosal cells. Sporozoites multiply by repeated endodyogeny to form endozoites (also called tachyzoites/ trophozoites). These infect new cells in intestine and enter two phases :
acute phase : after produced by endodyogent, tachyzoites enter all cells except RBC can be infected with T. gondii endozoites. . tachyzoites multiply in the cytoplasmic vacuole of the cells they infect. Here, they may appear rounded and enclosed in the host cell. This appearance is called pseudocyst . On reaching a threshold number, the infected cell ruptures to release tachyzoites.
Chronic phase : tachyzoites continue to multiply at different sites. The immune system gears up in action to eliminate most of the tachyzoites. The surviving tachyzoites convert into cystozoites (also called bradyzoites) that are encysted in tissue, particularly brain and muscles. These cysts are called tissue cysts (true cyst) .Tissue cysts are 12-100 µm in size and contain 50 to several thousand bradyzoites. When a cat feeds on an infected intermediate host-a mouse or a bird-the bradyzoites liberate from the tissue cysts in intestine of the cat.

Bradyzoites, in the tissue cysts (true cyst) of non-feline animals, are infected to other animals or birds. In the non feline host, only asexual multiplication takes place. bradyzoites infect the intestinal cells of the non-feline hosts and initiate endodyogeny to produce tachyzoites. Tachyzoites multiply by endodyogeny. They infect deeper tissues to form tissue cysts containing bradyzoites. 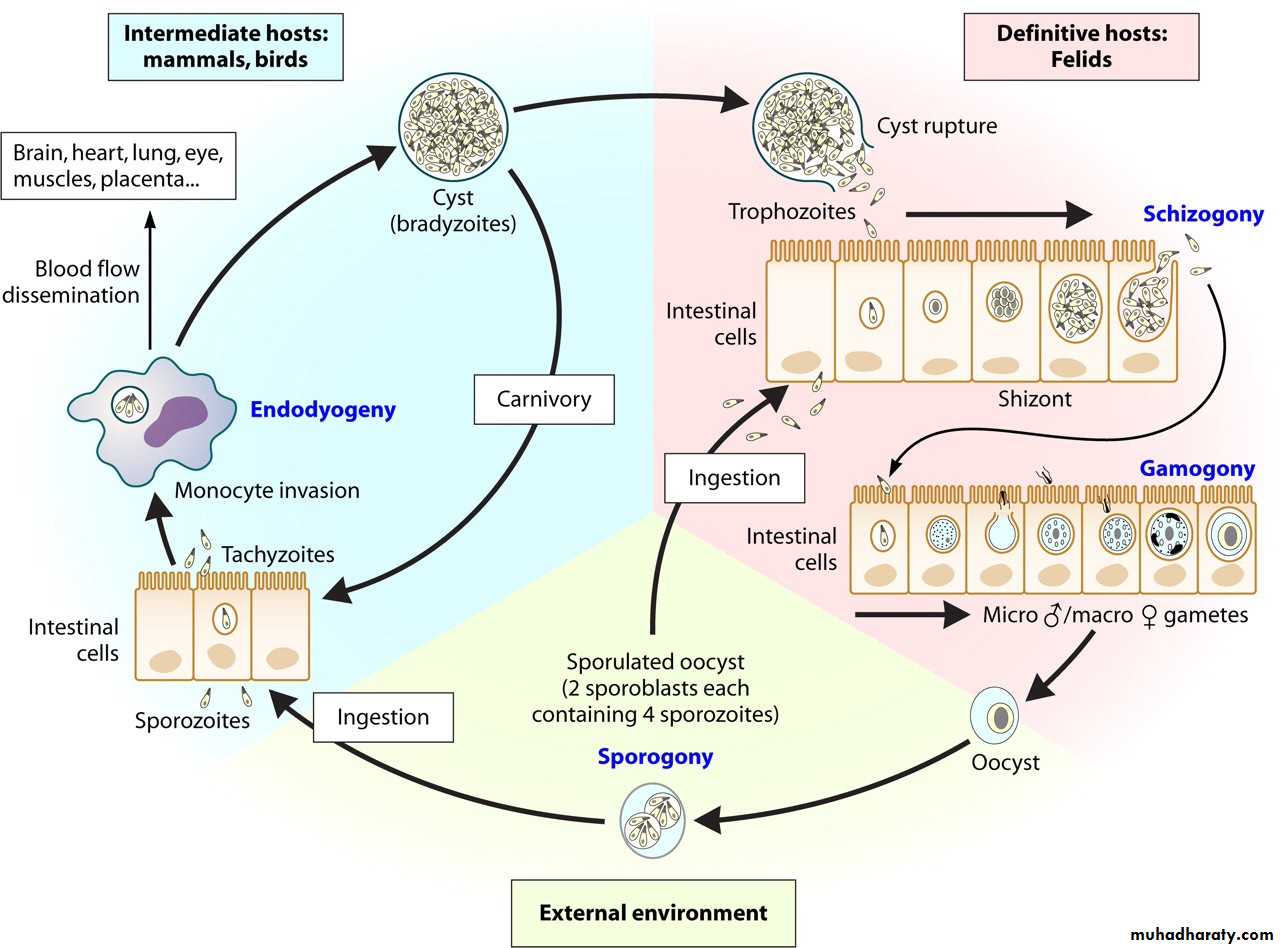 Routes of Transmission for human : 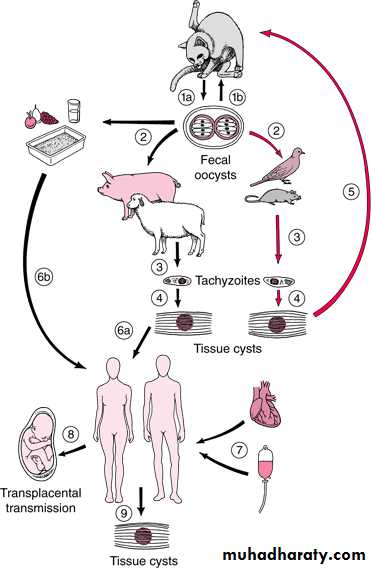 When symptomatic, toxoplasmosis is generally mild. The most common manifestation of acute toxoplasmosis is cervical lymphadenopathy. Headache, malaise and fever may accompany. These persons become asymptomatic after the acute phase of illness ends. They remain asymptomatic for the rest of their lives even though the tissue cysts continue to persist in various organs. Patients with AIDS or those receiving immunosuppressive therapy are at a risk of developing severe illness due to T. gondii. This can be due to reactivation of the pre-existing tissue cysts or acquisition of the parasite from an exogenous source.

Transplacental transmission of T. gondii depends on the period of infection in relation with conception. It is thought that there is essentially no risk of transplacental transmission if the woman was infected more than 6 months prior to conception (chronic phase). On the other hand, transplacental transmission is possible when the infection is acquired by the woman in period less than 6 months before conception or during pregnancy (acute phase ). About one-third of woman infected during pregnancy will transmit the infection to their offspring. The risk of transmission of T. gondii during pregnancy depends upon the trimester in which the mother is infected. The risk of transmission is lowest during the first trimester (15%) and highest (65%) during the third trimester.
Conversely, the disease in the offspring is most severe when T. gondii is acquired by the growing embryo during first trimester and can result in death of the fetus in utero and spontaneous abortion. The disease is usually asymptomatic at birth when T. gondii is acquired during third trimester. The typical manifestation in an infected offspring include hydrocephaly, microcephaly, intra-cerebral calcifications, convulsions, microphthalmos, chorioretinitis, optic nerve atrophy, psychomotor disturbances, hepto-spleenomegaly and jaundice. Infected offspring, asymptomatic at birth, may have learning disabilities and chronic neurologic manifestations later their lives. 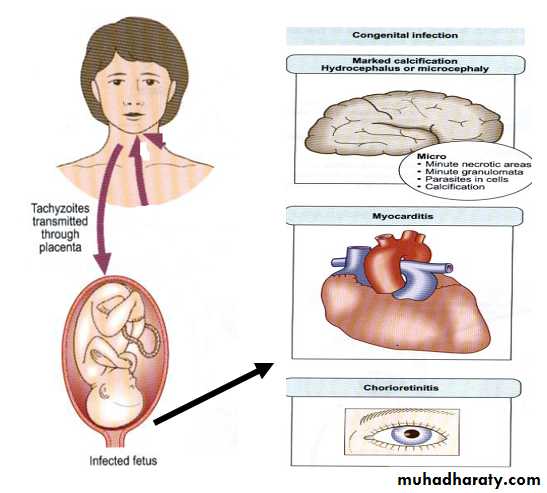 T. gondii infection can be diagnosed indirectly with serological methods and directly by PCR, Demonstration of the organism at biopsy and in blood are also definitive. In adults, toxoplasmosis is normally diagnosed serologically by detection of parasite-specific IgG and IgM antibodies using Elisa . IgM antibodies can be detected as early as one week after the primary infection, peak within two to four weeks, then drop to below the detection limit within a few weeks; in some cases persistence at low titers lasts longer. IgG antibodies appear somewhat later, peak after two to four months and persist for many years. A high or rising IgG titer with co temporal detection of IgM indicates an acute primary infection.

IgM result
Report\ interpretation for human
Negative
Negative
No serological evidence of infection with Toxoplasma
Negative
Positive
Possible acute infection or false –positive IgM result. Obtain a new specimen for IgG and IgM testing. If results for the second specimen remain the same , the IgM is probably a false – positive.
Positive
Negative
Infected with Toxoplasma for more than 1 year .(chronic)
Positive
Positive
Possible recent infection within the last 12 month , or false- positive IgM reaction . sent the specimen to a reference lab. With experience in diagnosis of Toxoplasma for further testing.

The following cases require treatment: acute or sub acute, symptomatic infections in children and adults as well as symptomatic or asymptomatic primary infections in pregnant women. In an acute primary infection during pregnancy, the risk of infection for the developing fetus can be eliminated by starting chemotherapy immediately. Several different therapeutic schemes are recommended for this indication. For example, spiramycin daily for four weeks from diagnosis to the end of the 15th week of gravidity, and in the period beginning with the 16thweek of gravidity pyrimethamine daily for four weeks together with sulfadiazine and folic acid. The recommendations also vary for treatment of toxoplasmosis in AIDS cases, e.g., pyrimethamine/ sulfadiazine or pyrimethamine/clindamycin.
Prevention :
Toxoplasmosis is prevented by :
washing of hand before meal.
washing of fruits and vegetable before consumption .
meat should be properly cooked to avoid infection with tissue cyst .
prevent direct contact with cat is also recommended.