Birth defect, congenital malformation, and congenital anomaly , terms used to describe structural, behavioral, functional, and metabolic disorders present at birth.
Terms used to describe the study of these disorders are teratology and dysmorphology.
Major structural anomalies occur in approximately 3% of live born infants and birth defects are a leading cause of infant mortality, accounting for approximately 25% of infant deaths.

Genetic factors, such as chromosome abnormalities and mutant genes, account for approximately 28%.
Environmental factors produce approximately 3% to 4%.
a combination of genetic and environmental influences (multifactorial inheritance) produces 20% to 25%.
Twinning causes account 0.5% to 1% .

Malformations occur during formation of structures, for example , during
organogenesis(third to eighth weeks of gestation.).
They may result in complete or partial absence of a structure or in alterations of its normal configuration.
Malformations are caused by environmental and/or genetic factors acting independently. 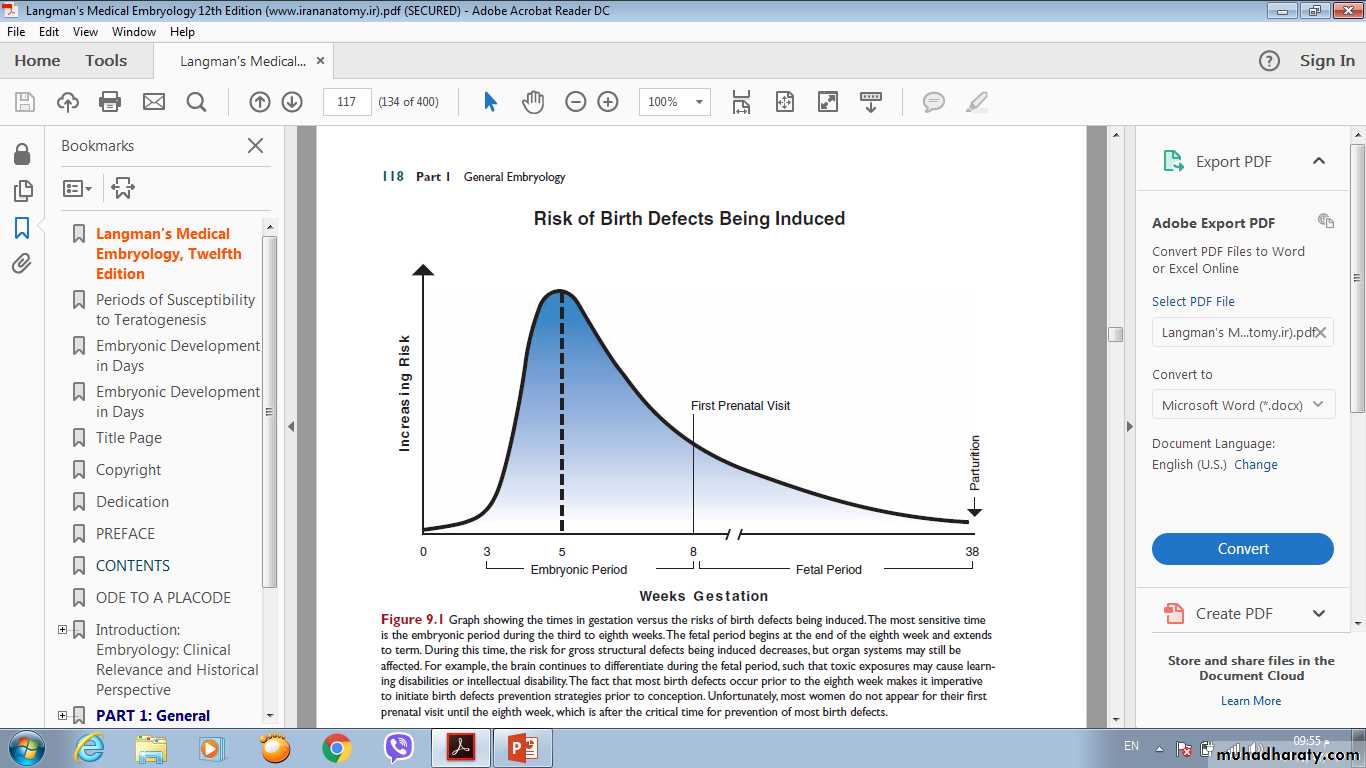 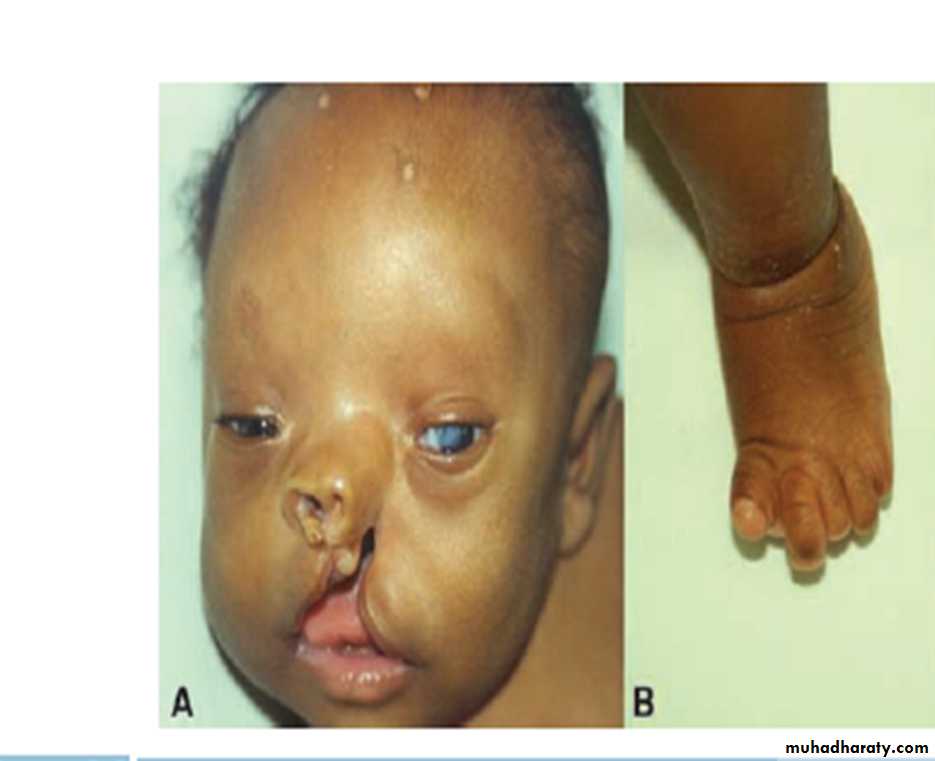 Deformations; result from mechanical forces that mold a part of the fetus over a prolonged period. Clubfeet, for example, are caused by compression in the amniotic cavity.
Abnormal positioning of the lower limbs and club feet as examples of
• deformations. These defects are probably caused by oligohydramnios (too little amniotic fluid).

• Until the early 1940s, it was assumed that congenital defects were caused primarily by hereditary factors. With the discovery that rubella ( German measles ) affecting a mother during early pregnancy caused abnormalities.
• In 1961, observations limb defects to the sedative thalidomide and made it clear that drugs could also cross the placenta and produce birth defects. Since that time ,many agents have been identified as teratogens(factors that cause birth defects). 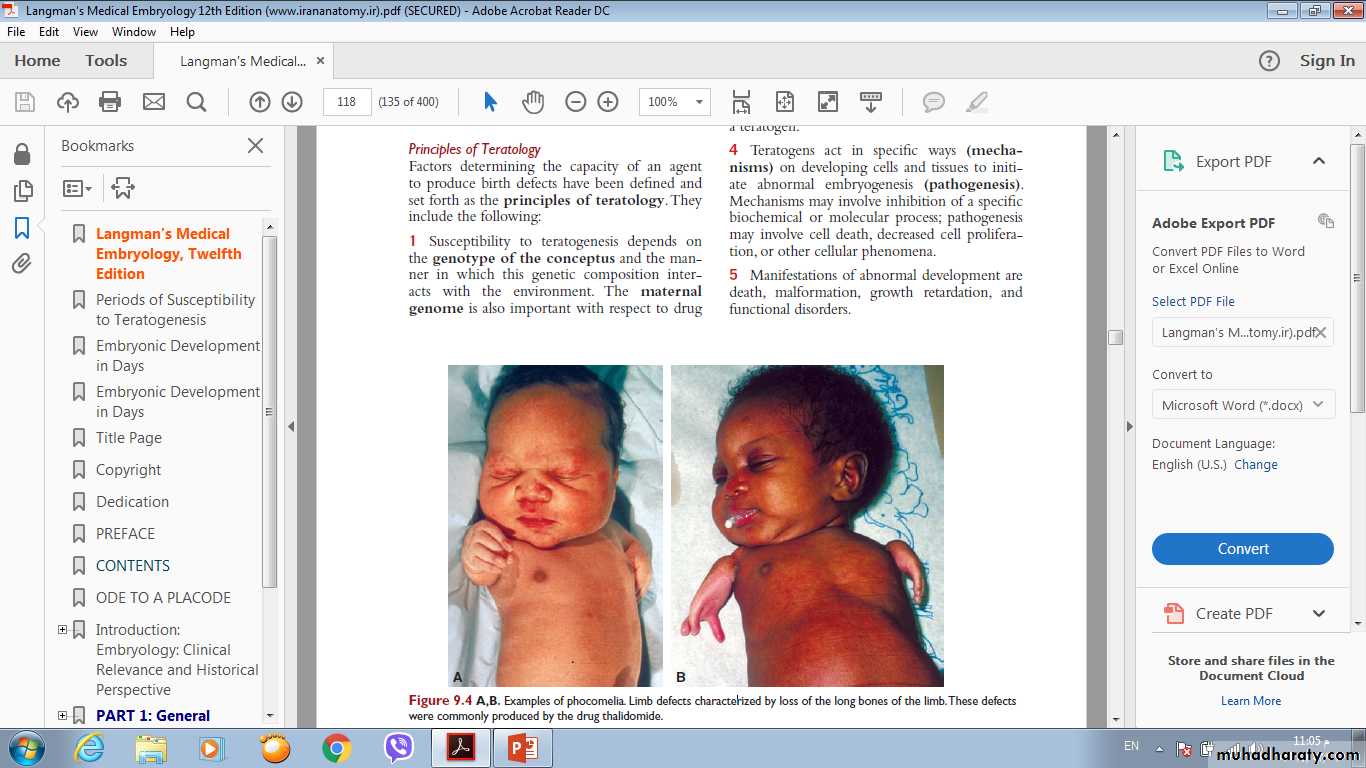 Factors determining the capacity of an agent to produce birth defects(teratogens). They include the following;
1-genotype of the conceptus.
2- Developmental stage at the time of exposure.
The most sensitive period for inducing birth defects is the third to eighth weeks of gestation, the period of embryogenesis.
3- dose and duration of exposure.
• 4- Teratogens act in specific ways (mechanisms) on developing cells and tissues to initiate abnormal embryogenesis (pathogenesis).
• 5- Manifestations of abnormal development are death, malformation, growth retardation, and functional disorders.

• Most major malformations are produced during the period of embryogenesis (Teratogenic period; third to eight weeks), but in stages before and after this time ,the fetus is also susceptible, so that no period of gestation is completely free of risk.
• Prevention of many birth defects is possible, but it depends on beginning preventative measures before conception and increasing physicians’ and women’s awareness of the risks.

Modern medicine has also made the fetus a patient who can receive treatment
such as;
• Fetal Transfusion
• In cases of fetal anemia produced by maternal antibodies or other causes, blood transfusions for the fetus can be performed.
Fetal Medical Treatment
Fetal Surgery
• Stem Cell Transplantation and GeneTherapy