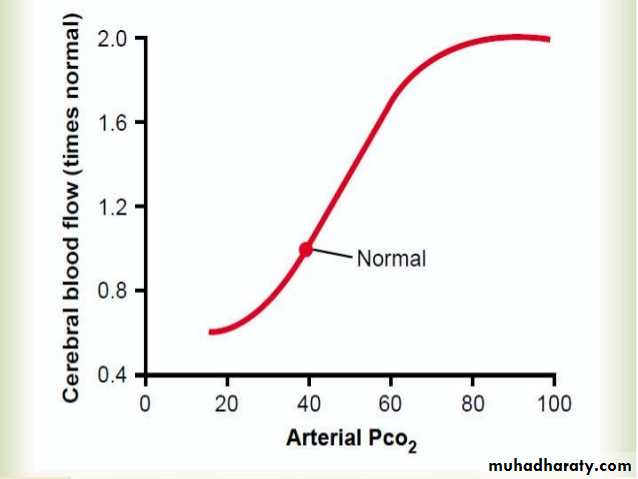 Role of the Sympathetic Nervous System in Controlling Cerebral

Blood Flow.
The cerebral circulatory system has strong sympathetic innervation that passes upward from the superior cervical sympathetic ganglia in the neck and then into the brain along with the cerebral arteries. This innervation supplies both the large brain arteries and the arteries that penetrate into the substance of the brain.
However, transection of the sympathetic nerves or mild to moderate stimulation of them usually causes very little change in cerebral blood flow because the blood flow autoregulation mechanism can override the nervous effects.
Clinical points
Cerebral “Stroke” Occurs When Cerebral Blood Vessels Are Blocked
Almost all elderly people have blockage of some small arteries in the brain, and as many as 10 per cent eventually have enough blockage to cause serious disturbance of brain function, a condition called a “stroke.”
Most strokes are caused by arteriosclerotic plaques that occur in one or more of the feeder arteries to the brain. The plaques can activate the clotting mechanism of the blood, causing a blood clot to occur and block blood flow in the artery, thereby leading to acute loss of brain function in a localized area. One of the most common types of stroke is blockage of the middle cerebral artery that supplies the mid portion of one brain hemisphere.

.The entire cerebral cavity enclosing the brain and spinal cord has a capacity of about 1600 to 1700 milliliters; about 150 milliliters of this capacity is occupied by cerebrospinal fluid and the remainder by the brain and cord.
Contents of CSF
The CSF is derived from blood plasma and is largely similar to it, except that CSF is nearly protein-free compared with plasma and has some different electrolyte levels. Owing to the way it is produced, CSF has a higher chloride level than plasma, and an equivalent sodium level.
CSF contains approximately 0.3% plasma proteins, or approximately 15 to 40 mg/dL, depending on sampling site. CSF is normally free of red blood cells, and at most contains only a few white blood cells. Any white blood cell count higher than this constitutes HYPERLINK "https://en.wikipedia.org/wiki/Pleocytosis" \o "Pleocytosis" pleocytosis.
Three Main Functions of CSF
CSF protects brain and spinal cord from trauma.
CSF supplies nutrients to nervous system tissue.
CSF removes waste products from cerebral metabolism.

Cushioning Function of the Cerebrospinal Fluid

A major function of the cerebrospinal fluid is to cushion the brain within its solid vault. The brain and the cerebrospinal fluid have about the same specific gravity (only about 4 per cent different), so that the brain simply floats in the fluid. Therefore, a blow to the head, if it is not too intense, moves the entire brain simultaneously with the skull, causing no one portion of the brain to be momentarily contorted by the blow.
Formation, Flow, and Absorption of Cerebrospinal Fluid
Cerebrospinal fluid is formed at a rate of about 500 milliliters each day, which is three to four times as much as the total volume of fluid in the entire cerebrospinal fluid system.
About two thirds or more of this fluid originates as secretion from the choroid plexuses in the four ventricles, mainly in the two lateral ventricles. Additional small amounts of fluid are secreted by the ependymal surfaces of all the ventricles and by the arachnoidal membranes.
The fluid secreted in the lateral ventricles passes first into the third ventricle; then, after addition of minute amounts of fluid from the third ventricle, it flows downward along the aqueduct of Sylvius into the fourth ventricle, where still another minute amount of fluid is added.
Finally, the fluid passes out of the fourth ventricle through three small openings, two lateral foramina of Luschka and a midline foramen of Magendie, entering the cisterna magna, a fluid space that lies behind the medulla and beneath the cerebellum.
Secretion by the Choroid Plexus.
Secretion of fluid into the ventricles by the choroid plexus depends mainly on active transport of sodium ions through the epithelial cells lining the outside of the plexus .
The sodium ions in turn pull along large amounts of chloride ions as well because the positive charge of the sodium ion attracts the chloride ion’s negative charge. The two of these together increase the quantity of osmotically active sodium chloride in the cerebrospinal fluid, which then causes almost immediate osmosis of water through the membrane, thus providing the fluid of the secretion.
Cerebrospinal Fluid Pressure
The normal pressure in the cerebrospinal fluid system when one is lying in a horizontal position averages 130 millimeters of water (10 mm Hg), although this may be as low as 65 millimeters of water or as high as 195 millimeters of water even in the normal healthy person.
Regulation of Cerebrospinal Fluid Pressure by the Arachnoidal Villi.
The normal rate of cerebrospinal fluid formation remains very nearly constant, so that changes in fluid formation are seldom a factor in pressure control. Conversely, the arachnoidal villi function like “valves” that allow cerebrospinal fluid and its contents to flow readily into the blood of the venous sinuses while not allowing blood to flow backward in the opposite direction.
Then, if the cerebrospinal fluid pressure rises still higher, the valves open more widely, so that under normal conditions, the cerebrospinal fluid pressure almost never rises more than a few millimeters of mercury higher than the pressure in the cerebral venous sinuses.
Conversely, in disease states, the villi sometimes become blocked by large particulate matter, by fibrosis, or by excesses of blood cells that have leaked into the cerebrospinal fluid in brain diseases. Such blockage can cause high cerebrospinal fluid pressure, .
Blood–Cerebrospinal Fluid and Blood-Brain Barriers
It has already been pointed out that the concentrations of several important constituents of cerebrospinal fluid are not the same as in extracellular fluid elsewhere in the body.
Furthermore, many large molecular substances hardly pass at all from the blood into the cerebrospinal fluid or into the interstitial fluids of the brain, even though these same substances pass readily into the usual interstitial fluids of the body. Therefore, it is said that barriers, called the blood–cerebrospinal fluid barrier and the blood-brain barrier, exist between the blood and the cerebrospinal fluid and brain fluid, respectively.
Barriers exist both at the choroid plexus and at the tissue capillary membranes in essentially all areas of the brain parenchyma except in some areas of the hypothalamus, pineal gland, where substances diffuse with greater ease into the tissue spaces. The ease of diffusion in these areas is important because they have sensory receptors that respond to specific changes in the body fluids, such as changes in osmolality and in glucose concentration, as well as receptors for peptide hormones that regulate thirst, such as angiotensin II.
The blood-brain barrier also has specific carrier molecules that facilitate transport of hormones, such as leptin, from the blood into the hypothalamus where they bind to specific receptors that control other functions such as appetite and sympathetic nervous system activity.

In general, the blood–cerebrospinal fluid and blood brain barriers are highly permeable to water, carbon dioxide, oxygen, and most lipid-soluble substances such as alcohol and anesthetics; slightly permeable to electrolytes such as sodium, chloride, and potassium; and almost totally impermeable to plasma proteins and most non–lipid-soluble large organic molecules.
Brain Metabolism
Like other tissues, the brain requires oxygen and food nutrients to supply its metabolic needs.
Total Brain Metabolic Rate and Metabolic Rate of Neurons.
Under resting but awake conditions, the metabolism of the brain accounts for about 15 per cent of the total metabolism in the body, even though the mass of the brain is only 2 per cent of the total body mass. Therefore, under resting conditions, brain metabolism per unit mass of tissue is about 7.5 times the average metabolism in non–nervous system tissues.
Most of this excess metabolism of the brain occurs in the neurons, not in the glial supportive tissues. The major need for metabolism in the neurons is to pump ions through their membranes, mainly to transport sodium and calcium ions to the outside of the neuronal membrane and potassium ions to the interior.
Each time a neuron conducts an action potential, these ions move through the membranes, increasing the need for additional membrane transport to restore proper ionic concentration differences across the neuron membranes. Therefore, during excessive brain activity, neuronal metabolism can increase as much as 100 to 150 per cent.
Special Requirement of the Brain for Oxygen—Lack of Significant Anaerobic Metabolism.
Most tissues of the body can live without oxygen for several minutes and some for as long as 30 minutes. During this time, the tissue cells obtain their energy through processes of anaerobic metabolism, which means release of energy by partially breaking down glucose and glycogen but without combining these with oxygen.
This delivers energy only at the expense of consuming tremendous amounts of glucose and glycogen. However, it does keep the tissues alive.
The brain is not capable of much anaerobic metabolism. One of the reasons for this is the high metabolic rate of the neurons, so that most neuronal activity depends on second-by-second delivery of oxygen from the blood.
Putting these factors together, one can understand why sudden cessation of blood flow to the brain or sudden total lack of oxygen in the blood can cause unconsciousness within 5 to 10 seconds.
Under Normal Conditions Most Brain Energy Is Supplied by Glucose.
Under normal conditions, almost all the energy used by the brain cells is supplied by glucose derived from the blood. As is true for oxygen, most of this is derived minute by minute and second by second from the capillary blood, with a total of only about a 2-minute supply of glucose normally stored as glycogen in the neurons at any given time.
A special feature of glucose delivery to the neurons is that its transport into the neurons through the cell membrane is not dependent on insulin, even though insulin is required for glucose transport into most other body cells.
Therefore, in patients who have serious diabetes with essentially zero secretion of insulin, glucose still diffuses readily into the neurons—which is most fortunate in preventing loss of mental function in diabetic patients.

Yet, when a diabetic patient is overtreated with insulin, the blood glucose concentration can fall extremely low because the excess insulin causes almost all the glucose in the blood to be transported rapidly into the vast numbers of insulin-sensitive non-neural cells throughout the body, especially into muscle and liver cells.
When this happens, not enough glucose is left in the blood to supply the neurons properly, and mental function does then become seriously deranged, leading sometimes to coma and even more often to mental imbalances and psychotic disturbances— all caused by overtreatment with insulin.
Thank you