INTRODUCTION
The nervous tissue is composed of interconnecting network of specialised cells called neurons (nerve cells) supported by neuroglial cells. There are about 10 million neurons in human beings. The function of neurons is to receive stimuli and conduct them to a central site, the central nervous system (CNS), where they are analysed and integrated to produce a desired response in the effector organs.
ANATOMICAL CLASSIFICATION OF NERVOUS SYSTEM Nervous system can be classified into two categories, central nervous system and peripheral nervous system 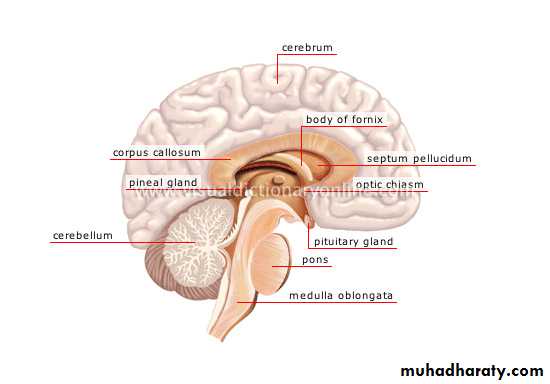 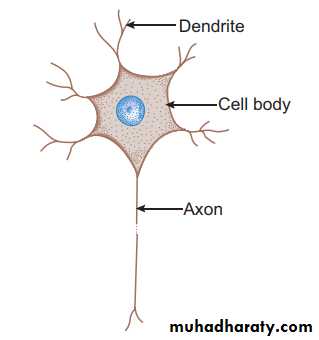 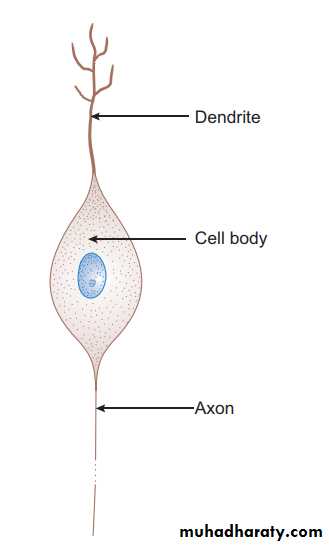 STRUCTURE OF A NEURON (MULTIPOLAR) I- Cell body/Soma/Perikaryon (5–150 nm): The cell bodies of all neurons are situated in the grey matter of the CNS and in the ganglia of PNS. The cell body of a neuron contains the nucleus and the following cytoplasmic organelles and inclusions : 1. Nucleus—is large, euchromatic, spherical and centrally located. 2. Nissl bodies or Nissl substance—are composed of large aggregations of rough endoplasmic reticulum – are observed as basophilic clumps by light microscopy – extend into dendrites but not into axon and axon hillock – disintegrate as a result of injury to axon (chromatolysis). 3. Golgi complex—are found near the nucleus. 4.Mitochondria—are numerous and rod shaped. 5. Neuro-filaments (10 nm dia) and microtubules (25 nm dia)—form neuronal cytoskeleton providing structural support and intracellular transport. 6. Melanin pigments—dark brown granules. 7. Lipofuscin pigments—residual bodies not digested by lysosomes (increase with age). 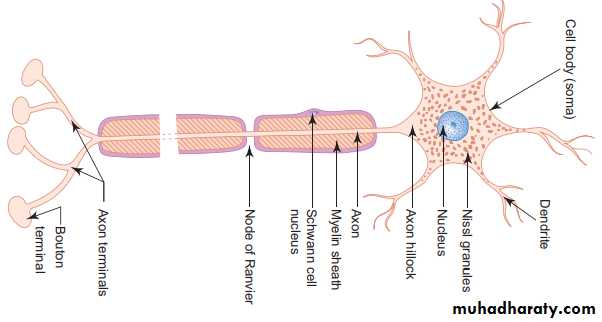 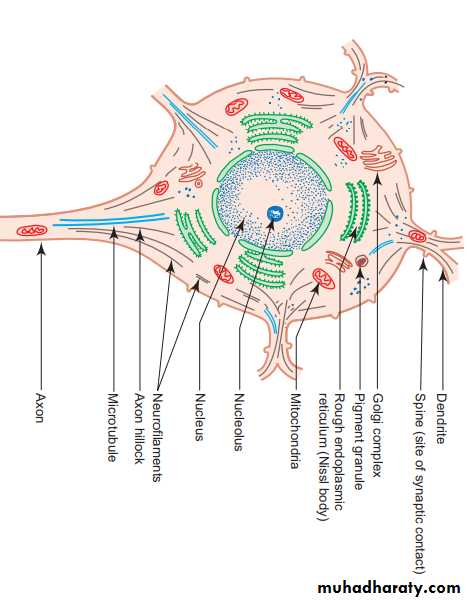 II- Dendrites - Are highly branched, tapering processes of a neuron. So their diameter is not uniform. - Are covered by thorny spines (gemmules) which are sites of synaptic contact. -Receive stimuli from sensory cells and other neurons and transmit them towards the soma. So they can be regarded as major sites of information input into neuron.
III- Axon - Single, long, cylindrical process of a neuron. So its diameter is uniform. - Does not branch profusely; but may give rise to collaterals. - Arises from a cone-shaped portion of the cell body called axon hillock, which is devoid of Nissl bodies, but contains bundles of microtubules. -The cytoplasm of the axon is called axoplasm and the plasma membrane is called axolemma. - Terminates by dividing into many small branches, axon terminals, ending in small swellings—terminal buttons. --Conducts impulses away from the cell body to the axon terminals from which impulses are transmitted to another neuron or another target cell. -Axons are commonly referred to as nerve fibres. - Are often surrounded by myelin sheath, which is derived either from Schwann cells (PNS) or oligodendrocytes (CNS). -When an axon is cut, peripheral part degenerates. ---Regeneration of the axon is possible only when the cell body of the neuron is intact. -Neurons do not regenerate in the event of cell body death, i.e. they do not multiply.
Myelinated and Unmyelinated Axons
-In the PNS, all axons are enveloped by Schwann cells which provide both structural and metabolic support. -Many axons with small diameter invaginate into one Schwann cell longitudinally and are simply surrounded by the cytoplasm of Schwann cells. ---They are called unmyelinated nerve fibers. -Other axons, especially the ones with larger diameter, invaginate into the Schwann cell and are wrapped by concentric layers of the Schwann cell plasma membrane forming myelin sheath. -These axons are called myelinated nerve fibers. - There are gaps (areas of axon not covered by myelin) along the length of myelin sheath at regular intervals called nodes of Ranvier. - In large myelinated axons, the nerve impulse jumps from node to node resulting in faster conduction (saltatory conduction). -The segment of myelin between two nodes of Ranvier is called internode. -The myelin of one internode is formed by a single Schwann cell.

Stages of myelin formation in PNS 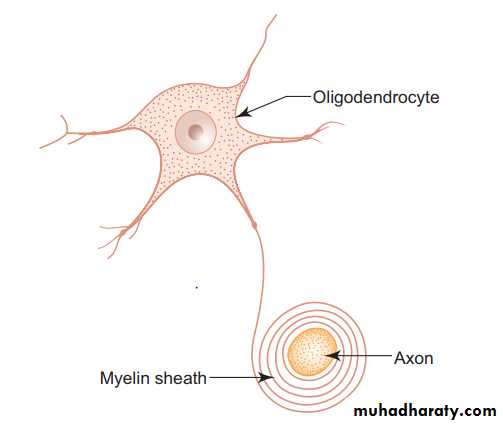