GLIAL CELLS & NEURONAL ACTIVITY Neuroglial cells support neuronal survival and activities, and are ten times more abundant in the mammalian brain than the neurons, like neurons, most glial cells develop from progenitor cells of the embryonic neural plate, in the CNS glial cells surround both the neuronal cell bodies, which are often larger than glial cells, and the processes of axons and dendrites occupying the spaces between neurons, except around the larger blood vessels, the CNS has only a very small amount of connective tissue and collagen. Glial cells substitute for cells of connective tissue in some respects, supporting neurons and creating a microenvironment immediately around those cells that is optimal for neuronal activity. The fibrous intercellular network surrounding cells of the CNS may superficially resemble collagen with light microscopy, but it is actually the network of cellular processes emerging from neurons and glial cells. Such processes are collectively called the neuropil . 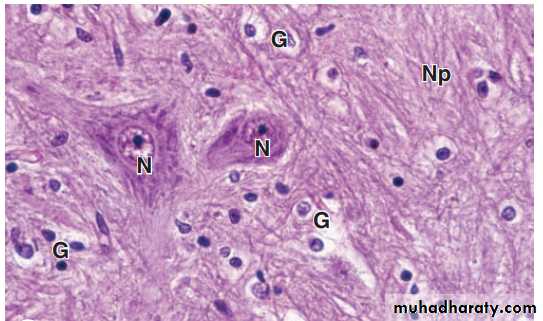 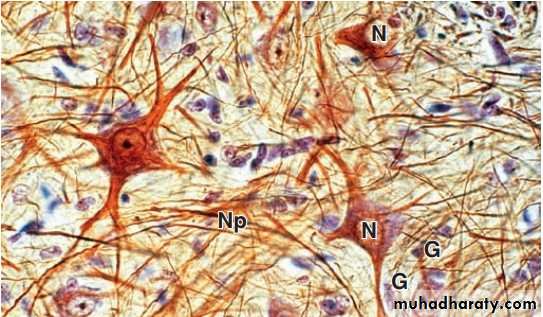 There are six kinds of glial cells:
I-Oligodendrocytes:
(oligo it means small, dendro means tree) produce the myelin sheaths around axons that provide the electrical insulation for neurons in the CNS. Oligodendrocytes extend sheetlike processes that wrap around parts of several axons, producing myelin sheaths, these are the predominant glial cells in CNS white matter, which is white because of the lipid concentrated in the wrapped membrane sheaths. The processes and sheaths are not visible by routine light microscope staining, in which oligodendrocytes usually appear as small cells with rounded, condensed nuclei and unstained cytoplasm . 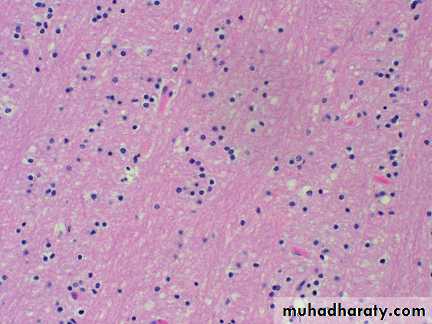 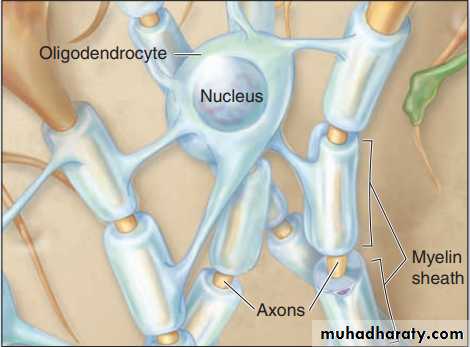 II-Astrocytes Astrocytes ( astron it means star ) have a large number of radiating processes and are also unique to the CNS, astrocytes are by far the most numerous glial cells of the CNS, as well as the most diverse structurally and functionally, Those with relatively few long processes are called fibrous astrocytes and are typical in white matter; those with many shorter, branched processes are called protoplasmic astrocytes and predominate in the gray matter, terminal branching of astrocytic processes is very extensive, allowing a single astrocyte to associate with over a million synaptic sites. The larger processes of all astrocytes are reinforced with bundles of intermediate filaments made of glial fibrillary acid protein (GFAP), which serves as a unique marker for astrocytes, the most common source of brain tumors. 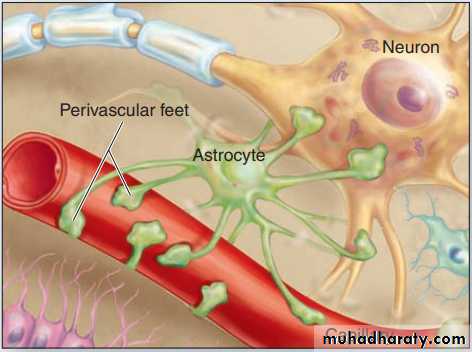 Functions of astrocytes: 1- Regulating the extracellular ionic concentrations around neurons, with particular importance in buffering extracellular K+ levels. 2- Guiding and physically supporting movements and locations of differentiating neurons in the developing CNS. 3- Extending processes with expanded perivascular feet that cover capillary endothelial cells and contribute to the BBB. 4- Regulating vasodilation within the CNS and moving nutrients, wastes, and other metabolites between neurons and capillaries. 5- Extending processes that associate with or cover synapses in the CNS, affecting the formation, function, and plasticity of these structures. 6- Forming a barrier layer of expanded processes, called the glial limiting membrane, lining the meninges at the external CNS surface. 7- astrocytes communicate directly with one another via gap junctions, forming a very large cellular network for the coordinated regulation of their various activities in different brain regions.
MEDICAL APPLICATION Most brain tumors are astrocytomas derived from those glial cells and characterized pathologically by their expression of GFAP 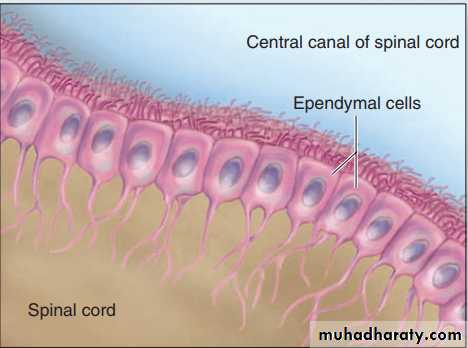 IV: Microglia Less numerous than oligodendrocytes or astrocytes but nearly as common as neurons, microglia are small cells with short irregular processes evenly distributed throughout gray and white matter, Unlike other glial cells, microglia migrate through the neuropil, scanning the tissue for damaged cells and invading microorganisms, they secrete a number of immunoregulatory cytokines and constitute the major mechanism of immune defense in the CNS, microglia do not originate from neural progenitor cells like other glia, but from circulating blood monocytes, belonging to the same family as macrophages and other antigen-presenting cells, nuclei of microglial cells can be recognized in routine hematoxylin and eosin (H&E) preparations by their small, dense, elongated structure, which contrasts with the larger, spherical, more lightly stained nuclei of other glial cells. Immunohistochemistry using antibodies against cell surface antigens of immune cells demonstrates microglial processes, when activated by damage or invaders, microglia retract their processes, proliferate, and assume the morphologic characteristics and functions of antigen presenting cells 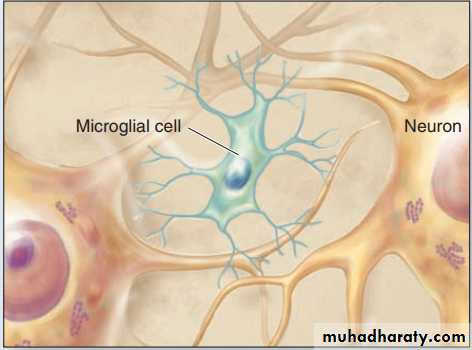 MEDICAL APPLICATION In multiple sclerosis (MS) the myelin sheaths surrounding axons are damaged by an autoimmune mechanism that interferes with the activity of the affected neurons and produces various neurologic problems. T lymphocytes and microglia, which phagocytose and degrade myelin debris, play major roles in progression of this disease. In MS destructive actions of these cells exceeds the capacity of oligodendrocytes to produce myelin and repair the myelin sheaths.
V: Schwann Cells : Schwann cells sometimes called neurolemmocytes, are found only in the PNS and differentiate from precursors in the neural crest, schwann cells have trophic interactions with axons and importantly allow for their myelination, like the oligodendrocytes of the CNS, one Schwann cell forms myelin around a segment of one axon, in contrast to the ability of oligodendrocytes to branch and ensheath parts of more than one axon. 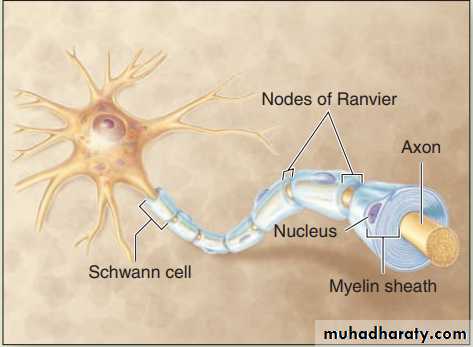 VI: Satellite Cells of ganglia : Also derived from the embryonic neural crest, small satellite cells form an intimate covering layer over the large neuronal cell bodies in the ganglia of the PNS. Satellite cells exert a trophic or supportive effect on these neurons, insulating, nourishing, and regulating their microenvironments. 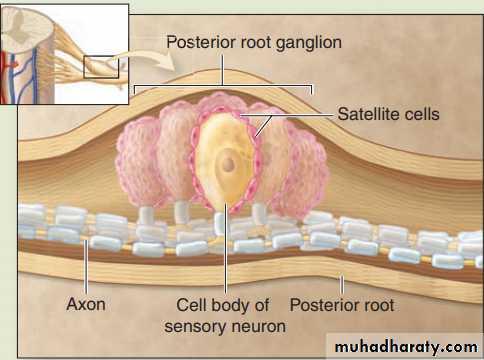