Cancer and the Immune System p

Neoplasia (Neo= new; plasia= growth) means new growth.
A neoplasm is a type of abnormal and excessive growth of tissue. The growth of a neoplasm is uncoordinated with that of the normal surrounding tissue, and persists in growing abnormally, even if the original trigger is removed.
Oncology (oncos=tumor, logos=study) is the branch of science dealing with the study of neoplasms or tumors.

Oncoprotein: a protein encoded by an oncogene that drives increased cell proliferation through one of several mechanisms.

All tumors, benign as well as malignant, have two basic components

Supportive stroma is composed of fibrous connective tissue and blood vessels; it provides the framework on which the parenchymal tumor cells grow.

based on their parenchymal components.
Benign when they are slow-growing and localised without causing much difficulty to the host.
Malignant when they proliferate rapidly, spread throughout the body and may eventually cause death of the host. The common term used for all malignant tumors is cancer.
The suffix ‘-oma’ is added to denote benign tumors. Malignant tumors of epithelial origin are called carcinomas, while malignant mesenchymal tumors are named sarcomas (sarcos = fleshy). 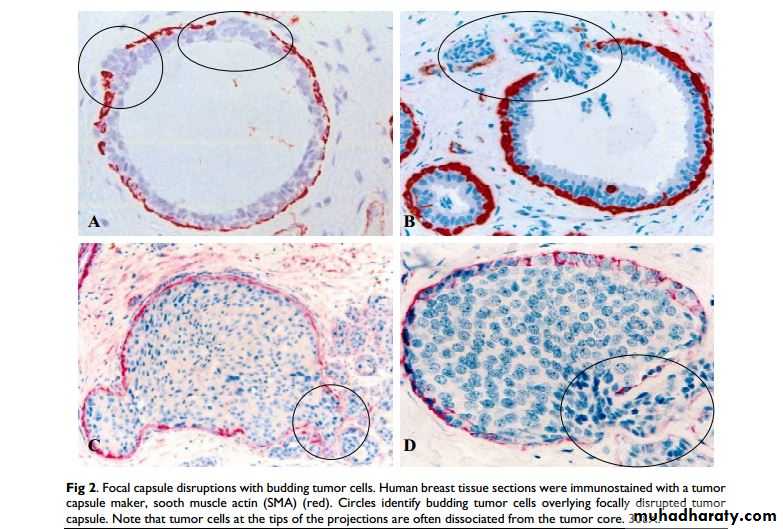 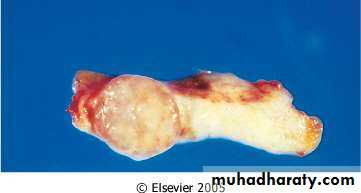 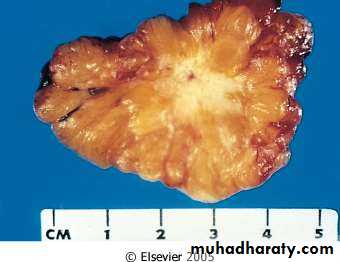 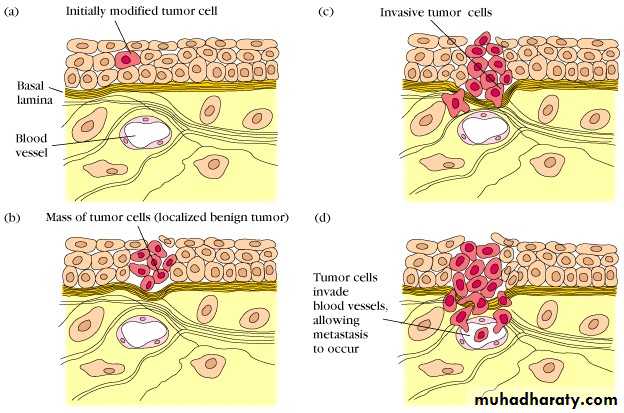 It is defined by the spread of a tumor to sites that are physically discontinuous with the primary tumor, and unequivocally marks a tumor as malignant.
The invasiveness of cancers permits them to penetrate into blood vessels, lymphatics, and body cavities, providing the opportunity for spread. 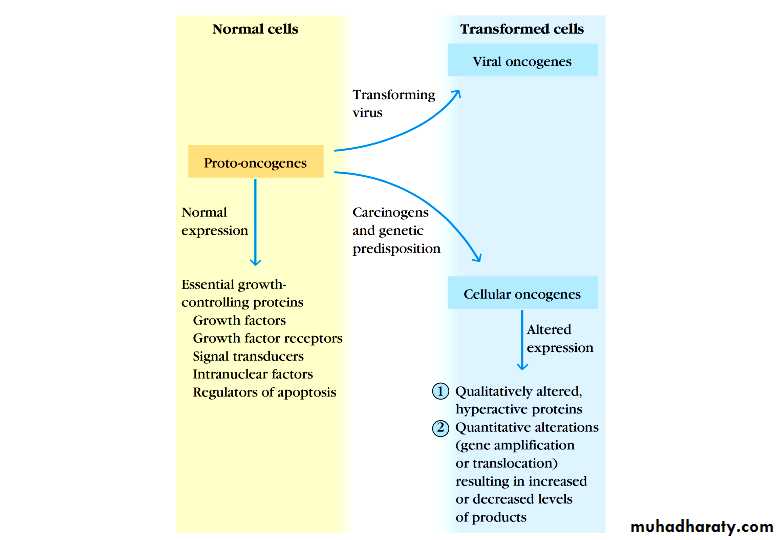 The immune system continually surveyed the body for the presence of abnormal cells, which were destroyed when recognized.
The immune system also played an important role in delaying the growth, or causing regression of established tumors.
This may be evident by:
• Many tumors contain lymphoid infiltrates.
• Spontaneous regression of tumors occurs (e.g melanomas, neuroblastomas )
• Tumors occur more frequently in the neonatal and in old age, when the immune system function less effectively.
• Tumors arise frequently in immunosuppressed individuals.

The concept of immune surveillance state that the malignant disorders occur when there is a failure of the immune system to recognize and destroy tumors cells before they become established.

It is an antigenic substance produced in tumor cells, i.e., it triggers an immune response in the host.
Tumorigenesis may lead to expression of new antigens or alteration in existing antigens that are found on normal cells.
These antigens may include membrane receptors, regulators of cell cycle and apoptosis, or molecules involved in signal transduction pathways.

Tumor antigens are useful tumor markers in identifying tumor cells with diagnostic tests and are potential candidates for use in cancer therapy.

Are more common and found on both tumor and normal cells during fetal life (oncofetal antigens) when the immune system is immature and unable to respond but that normally are not expressed in the adult ( or in low concentration).
Examples: carcinoembryonic antigen (CEA), alpha-fetoprotein (AFP), and beta human chorionic gonadotropin, (β-HCG).

CEA is a glycoprotein normally synthesised in embryonic tissue of the gut, pancreas and liver.
Their serum levels are high in cancers of the gastrointestinal tract, pancreas and breast.
CEA levels are also elevated in certain non-neoplastic conditions e.g. in ulcerative colitis, Crohn’s disease, hepatitis and chronic bronchitis.

Beta-HCG is produced by the trophoblast epithelium of the placenta during pregnancy.
Detectable β-HCG in males or nonpregnant females indicates an underlying tumor.
Gonadal germ cell tumors, and adenocarcinomas of the ovary, pancreas, stomach, as well as hepatomas, produce this molecule. 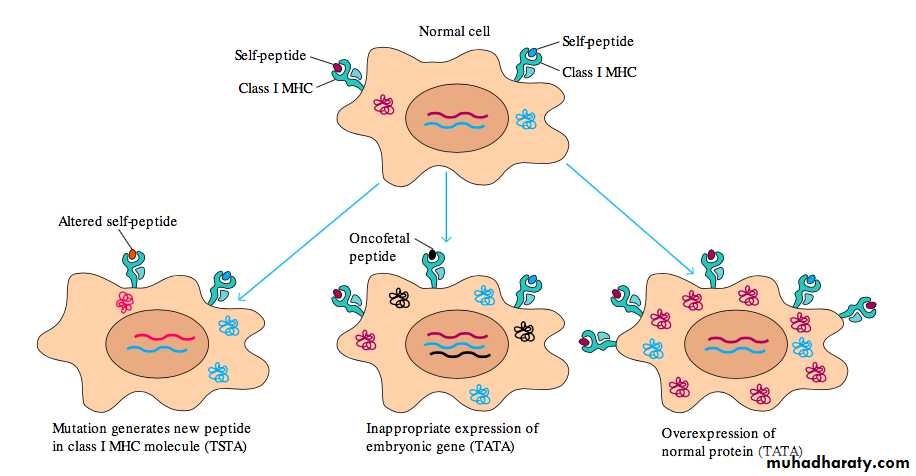 - These specific antibodies bind together on tumor cell surface

leading to destruction of tumor through:

b- Activation of macrophages

• Mechanisms by which tumor escape immune defenses:
• 1) Reduced levels or absence of MHCI molecule on tumor so that they can not be recognized by CTLs
• 2) Some tumors stop expressing the antigens
• These tumors are called “antigen loss variants”
• 3) Production of immunosuppressive factors by tumor e.g. transforming growth factor (TGF-β)
• 4) Tumor antigens may induce specific immunologic tolerance

• 5) Tumor cells have an inherent defect in antigen processing and presentation
6) Ag shed from the tumor have been detected in human serum, these soluble Ags may saturate the receptors on T- or B- cells.
• 7) Antigens on the surface of tumors may be masked by sialic acid-containing mucopolysaccharides

8. Many tumors have the capacity to modulate their surface Ags, expressing different Ags if the original Ags have been recognized.

9. Lymphocytes that are sensitized to the tumor Ag may get trapped in the lymph nodes or lymph organ that drains the affected site. The shed Ags described earlier may be considered to be blocking factors.
Trapping the effector cells in the node, preventing them from entering the peripheral circulation.

10. Certain type of tumors tends to invade bone and cartilage has been shown to secrete collagenase, which causes lytic destruction of those components that would otherwise be impermeable to growth of a soft tissue.
11. Other tumor can secrete prostoglandins (PGs), which negatively regulate NK- and K-cells.

12. Tumors that produce substances that interfere with the production of IL1 by macrophages or IL2 by T-cell subsets would limit the overall responsiveness to tumors.

Thank you for you listening