• An acute systemic allergic reaction
• The result of a re-exposure to an antigen that elicits an IgE mediated response
• Usually caused by a common environmental protein that is not intrinsically harmful
• Often caused by medications, foods, and insect stings
• It is a Type I hypersensitivity

The initial symptoms may appear innocuous: tingling, warmth and itchiness. The ensuing effects on the vasculature give vasodilatation and edema. The consequence of these may be no more than a generalized flush, with urticaria and angioedema. 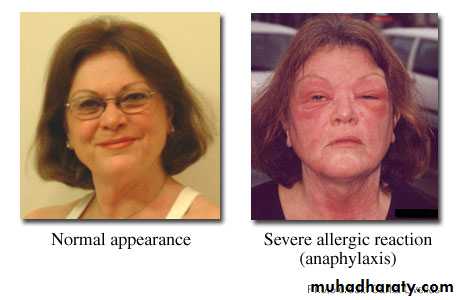 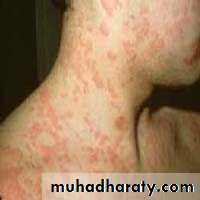 Early recognition and treatment are essential.

Cutaneous manifestations of pruritus &urticaria with or without angioedema are characteristic of this disease.

There is no convincing evidence that age , sex , race ,occupation, or geographic location predispose a human to anaphylaxis except through exposure to an immunogen.

According to most studies ,atopy does not predispose individuals to anaphylaxis from penicillin or insect venom.

depends largely on an accurate history of appearance of symptoms within minutes of exposure to an offending immunogen.

At postmortem ,evaluation for an IgE in the heart blood of a dead patient had proven the etiology of systemic anaphylactic reaction as a cause of death.

1-prevention of further exposure to an allergen.
2- ensure an airway potency.
3- oxygen

4- restoration of BP by lying the patient in a flat position & giving I.V. fluid.

B2-agonist nebulizers are used if there is sever bronchospasm.

If hypoxia is severe, assisted ventilation may be required.

Desensitization has a well- established place in the management of this disorder, particularly if the exposure is unavoidable or unpredictable as in insect stings. 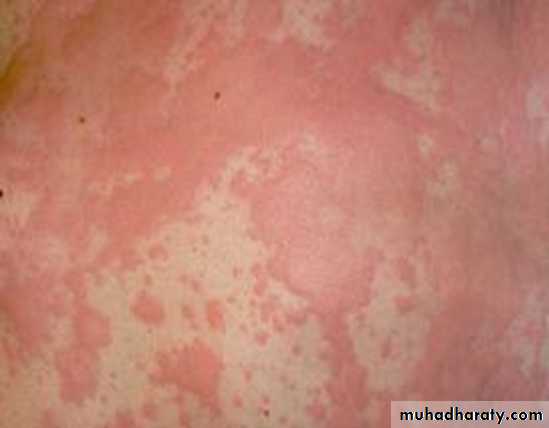 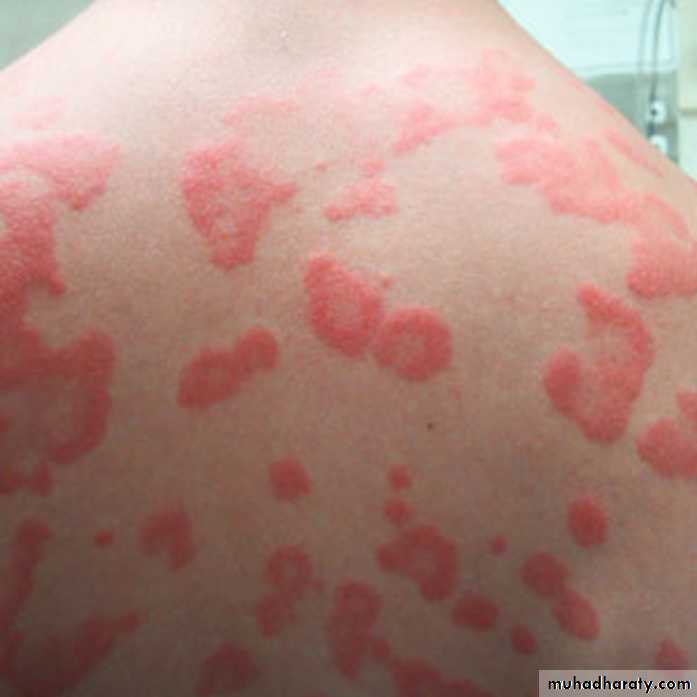 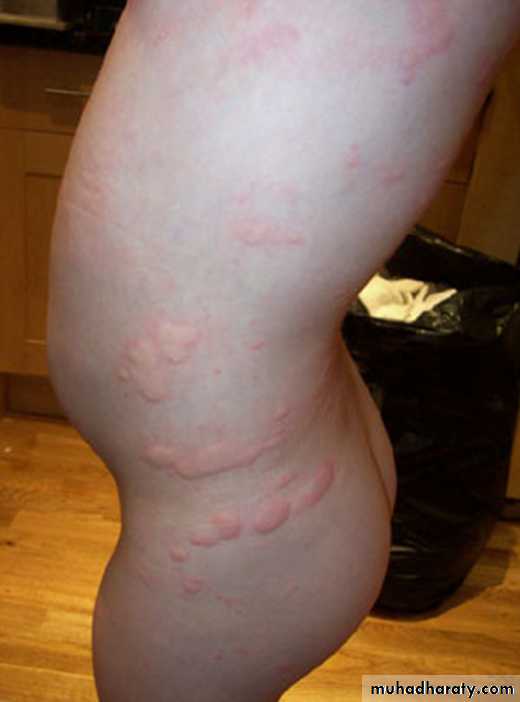 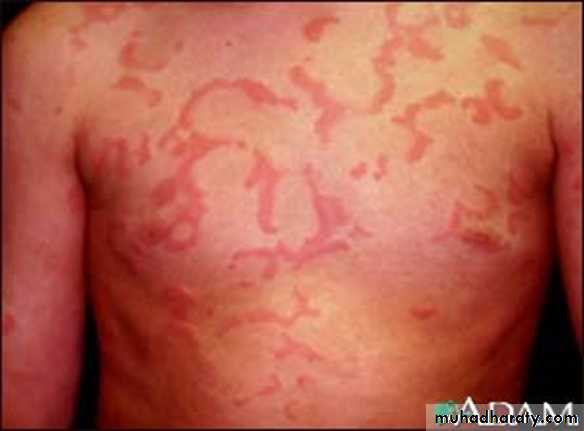 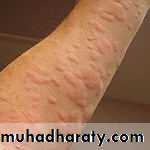 • The term urticaria is widely used to describe an eruption of wheals. It is now also increasingly being used to define a disease characterized by short-lived itchy wheals, angio-oedema or both together.
• Urticaria is a superficial swelling of the skin (epidermis and mucous membranes) that results in a red, raised, itchy rash. It is also known as hives, nettle rash, or wheals.

Urticaria is described as ‘acute’ if it lasts less than 6 weeks and ‘chronic’ if it persists beyond this period.

• Angio-oedema is a deeper form of urticaria oedema in the dermis and submucosal or subcutaneous tissues due to increased vascular permeability.
• Can involve the face, eyelids and/or lips.
• Less commonly the tongue and larynx.
• Onset can be dramatic.

Final events in the pathogenesis involves degranulation of cutaneous mast cells which releases a number of inflammatory mediators ( including histamine) which in turn make the dermal and sub dermal capillaries leaky.
.


In most cases the underlying cause is unknown. Occasionally these conditions are secondary to viral or parasitic infections, drug reactions ( e.g. NSAIDs, penicillin, ACE inhibitors, opiates), food allergy (e.g. to strawberries& seafood), or rarely SLE.

There is evidence for an autoimmune etiology in some of ‘idiopathic’ cases.

Urticaria/angioedema is commoner in atopic individuals and usually presents in children and young adults.

Urticaria produces cutaneous swellings or wheals developing acutely over a few minutes. They can occur anywhere on the skin and last between minutes and hours before resolving spontaneously.


Lesions are intensely itchy and show no surface change or scaling. They are normally erythematous but if very acutely swollen, they may appear flesh- colored or whitish and people often mistake them for blisters.

Angioedema with subcutaneous involvement presents as soft tissues swelling ( edema) especially around the eyes, the lips and the hands but this is rarely itchy.

The history is the most useful factor in the diagnosing urticaria. The physical urticaria should be reproducible by applying the relevant stimulus.

Urticaria & angioedema may appear separately or together as cutaneous manifestations of localized non pitting edema, A similar process may occur at mucosal surfaces of upper respiratory & gastrointestinal tracts.

• can be either:
• *immune mediated - IgE on mast cells and basophils cross-link with the allergen and activates the cells e.g.- urticaria induced by
• a- medication (penicillin), pollens, food, , helminthes)
• b- physical(dermographism: linear wheals after brisk stroke with a firm object., cold, exercise, cholinergic drugs)
• -

The mechanisms above lead to degranulation of dermal mast cells in response to a number of stimuli, which causes vasodilatation, dermal oedema and a perivascular infiltrate of lymphocytes and eosinophils . If deeper it causes angioedema.

Treatment:-
Any underlying cause should be treated
• appropriately. Patients should avoid salicylates and opiates as they can degranulate mast cells.

• If control provokes difficult, addition of a sedating antihistamine, an H2- blocker or dapsone may be helpful. Steroids are kept for troublesome urticaria& high doses may be needed.

Characterized by recurrent self limiting attacks, involving the skin, subcutaneous tissues, upper respiratory tract or GIT.
The attacks may be precipitated by local trauma(eg. dental procedures, infection)& last for 2 days.

It is an autosomal dominant disorder ; caused by decreased production of C-1 inhibitor protein which is a complement component that inhibits the activation of the classical pathway & kinin cascade. Activation of which gives rise to local pain & swelling. HAE is also called inherited C-1 inhibitor deficiency.

It usually not associated with urticaria & allergic diseases.

It usually present in adolescents& early adulthood. Family history is found in 80% of cases.