Lec.1
Blood Vessels:
Vascular disorders are responsible for more morbidity and mortality than any other category of human diseases, arterial diseases are the most important. 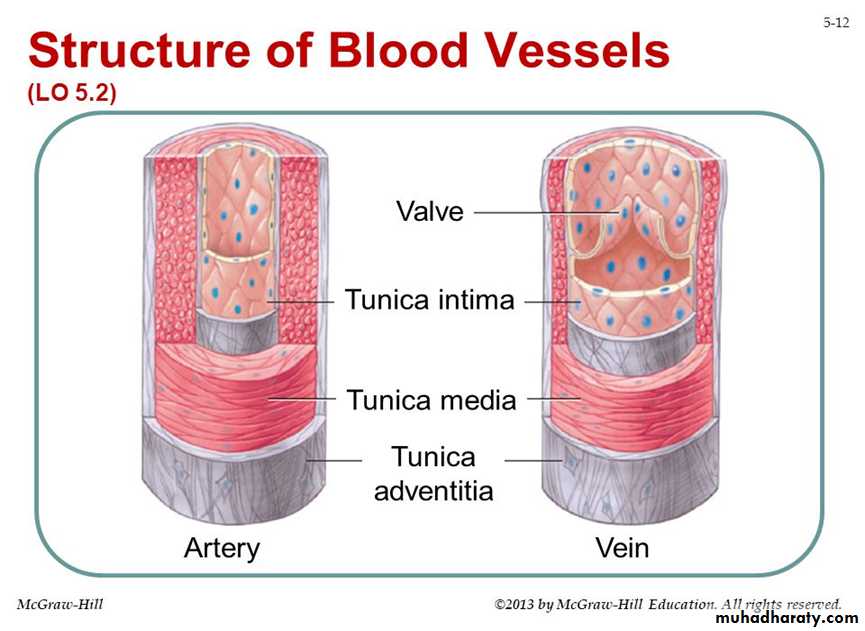 Arteriosclerosis:-
Is the generic term for 3 pattern of vascular diseases, all of which cause thickening and inelasticity of arteries:
(1) The dominant pattern is atherosclerosis .
(2) Monkeberg's medial calcific sclerosis characterized by calcification in the media of muscular arteries.
(3) Arteriosclerosis which occurs in small vessels associated with hypertension and diabetes mellitus.

It's characterized by intimal plaques called (atheroma) that protrude into the lumen, weaken the underlying media and undergo a series of complications as thrombosis so called atherothrombotic disease.
Atherosclerosis alone accounts for more than half of all deaths in the western world ,the disease begins in childhood and progress slowly over the decades.
Risk factors:-
Can be divided into constitutional factors and acquired factors which are controllable.
(I) Constitutional factors:-
1- Age: between 40-60 years increasing the risk to five folds.
2- Sex: men are much more prone to atheroma and its consequences than women that's because females hormones may be protective while androgen may increase the risk of atheroma.
So that after menopause the frequency of myocardial infarction becomes the same in both sexes by the 70th and 80th decade of life.
3- Familial predisposition: it's most likely polygenic and it may relate to familial clustering of other risk factors, such as HT, DM and familial hypercholesterolemia.
In other instances, it involves well defined hereditary genetic derangement in lipoprotein deposition that result in high blood lipid vessels.

Can be divided into major risk factors which include:-
1- Hyperlipidemia such as increased of LDL.
2- Hypertension.
3- Cigarette smoking.
4- Diabetes mellitus.
The less important risk factors are:-
1- Insufficient regular physical activity.
2- Obesity which regarded as independent risk factor.
3- Behavioral pattern & stress people who are aggressive and angry particularly at risk
4- Diet habbit.
The multiple factors impose more than additive effect e.g. if 3 risk factors are present as (hyperlipidemia, HT and smoking) the heart attack rate 7 times greater than when none are present, but atherosclerosis may develop in absence of any apparent risk factors.
Pathogenesis:-
These are a number of hypotheses for pathogenesis of atherosclerosis, the most important one is response- to- injury hypothesis which begins by chronic endothelial injury from hyperlipidemia, HT, cigarette smoking, immune reaction, haemodynamic factors, toxins and viruses, these factors cause increased endothelial permeability to:-
1- Lipoproteins especially LDL or modified LDL.
2- Circulating monocytes, leukocytes, T-lymphocytes and SMCs of intimal or medial origin.
The monocytes after endothelial injury adhere and migrate between ECs to localized subendothelially they transformed into macrophages and engulf the lipoproteins to become foam cells, macrophages also proliferate in the intima. If injury continue, platelets also adhere to the endothelium. SMCs some of medial origin also migrate in the intima and take present lipids to transform into foam cells, the accumulation of these foamy cells appear macroscopically as fatty streaks, the SMCs also synthesize collagen, elastin and glycoproteins to form mature fibrofatty atheroma.
Thrombosis is a complication of late-stage atherosclerosis and organization of thrombi may contribute to plaque formation, platelets generally do not adhere to the arterial wall without severe injury of endothelial cells, Where the foam macrophages and SMCs died the released extracellular lipid and cellular debris which surrounded by SMCs. 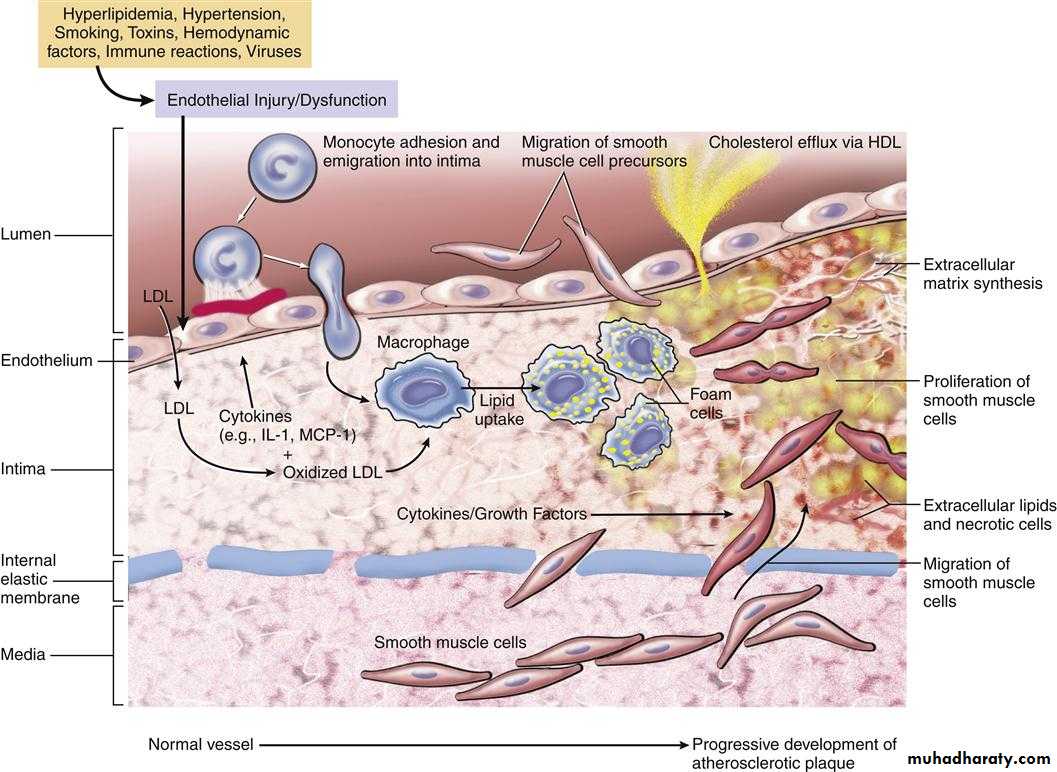 Macroscopically:-
The atheroma plaque appearance depending on the content of lipid, so it may be bright yellow if lipid content more, or grey if fibrous tissue more. 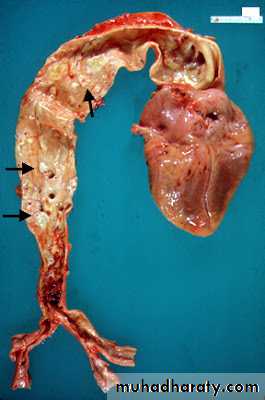 Microscopically:- The plaques have essentially 3 components:- 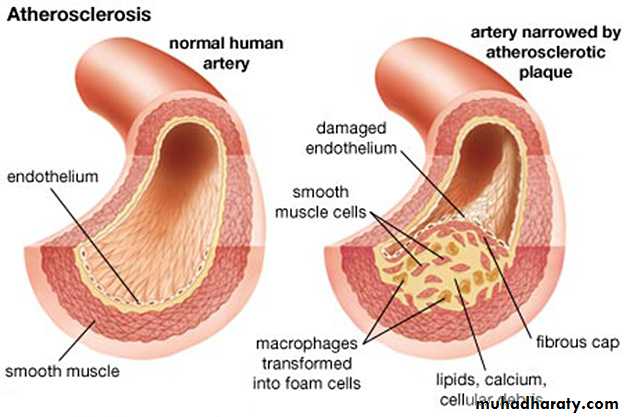 Some plaques contain relatively small amounts of lipids and are composing almost entirely of connective tissue cells from fibrous plaque. 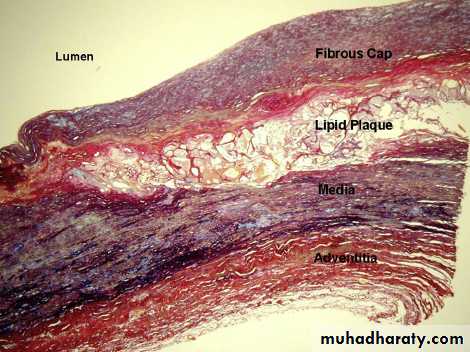 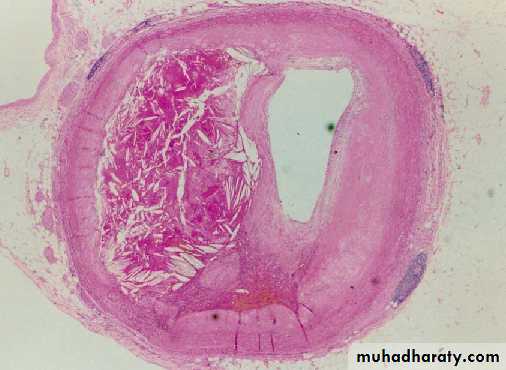 Plaques may develop 4 complications, these are:- 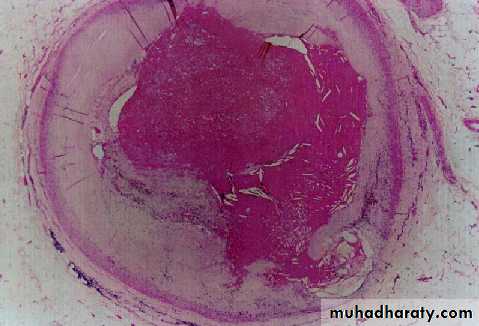 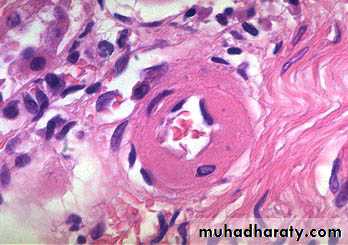 this type seen in light microscope by its concentric laminated, onion like, thickening of the lumen, there is hypertrophy and hyperplasia of vascular SMCs and thickening of basement membrane. 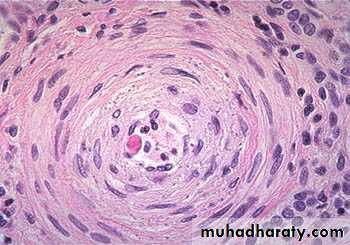 The term vasculitis is applied to any inflammatory involvement of an artery, vein or venule, it's caused by infection, irradiation, mechanical trauma and arthus reaction
But systemic necrotizing vasculitis which induced by immune complexes, these complexes found accumulate in vessel walls by deposition from circulation, by in situ formation or by combination of these mechanism.
The classification of systemic vasculitis depend on the size of the involved blood vessels, the anatomic site, the histologic characteristics of the lesion and the clinical manifestations.
So the most common types of vasculitis.
1- Polyarteritis nodosa (PAN).
2- Wegener's granulomatosis. 3- Microscopic polyangitis.
4- Temporal( giant cell, cranial ) arteritis.
5- Kawasaki's disease.
6- Thromboangitis obliterans (Buerger's disease). 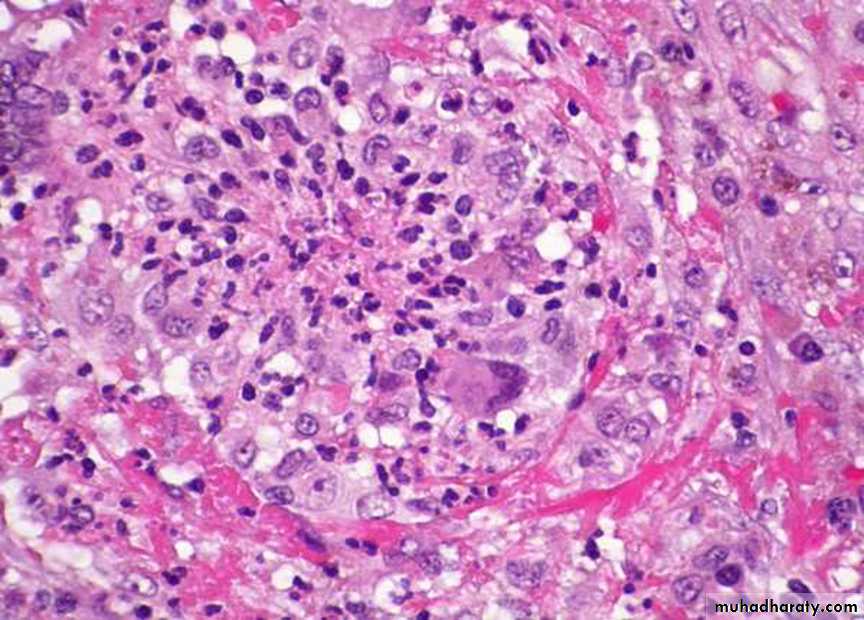