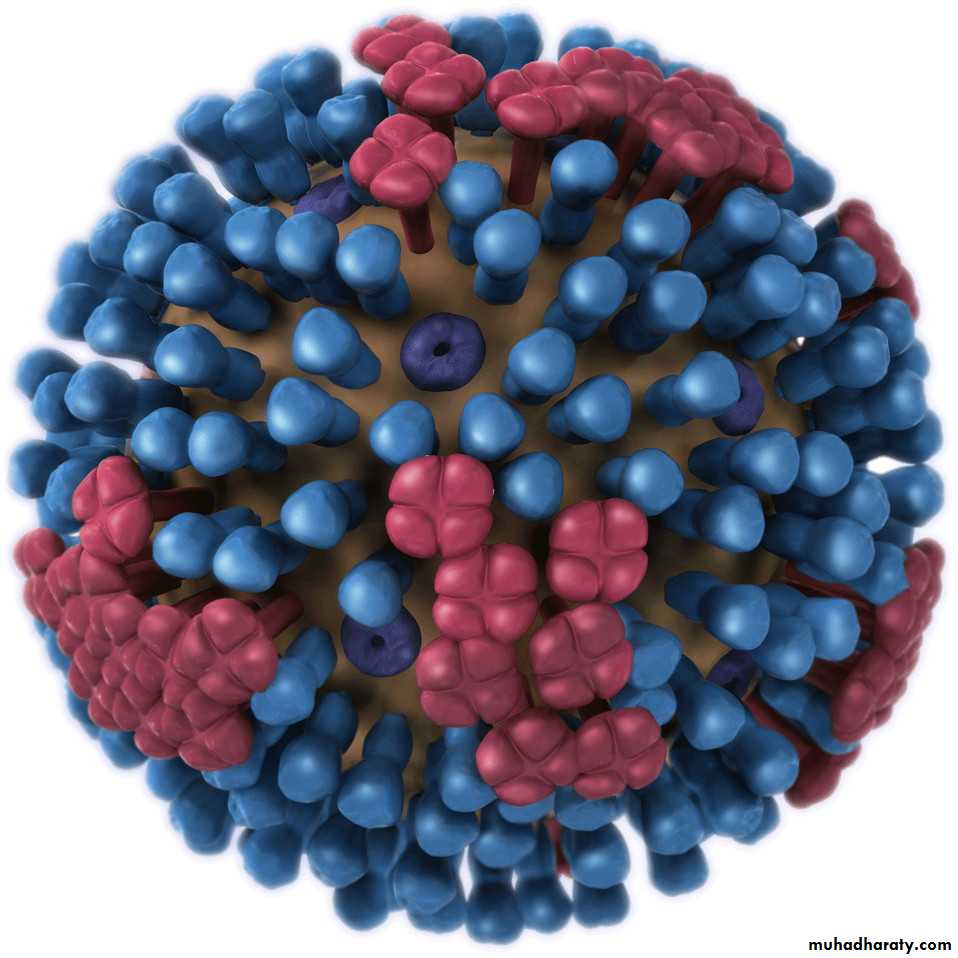 Influenza Viruses
Influenza viruses belong to the family of Orthomyxoviridae and are the causative agents of influenza, a respiratory disease in humans (Flu) with well-defined systemic symptoms that occurs in sporadic, epidemic, and pandemic forms.
Influenza A and B viruses cause substantial morbidity and mortality in humans.
Whereas influenza C viruses cause sporadic outbreaks of mild respiratory disease, mainly in children.

Epidemic refers to an increase, often sudden, in the number of cases of a disease above what is normally expected in a population within a geographic area
Pandemic refers to an epidemic that has spread over several countries or continents, usually affecting a large number of people.

Properties of the Virus

Morphology
Influenza viruses are spherical or filamentous, enveloped particles 80–120 nm in diameter.
It is composed of a characteristic segmented -ve sense, single-stranded RNA genome, a nucleocapsid, and an envelope (See-Fig). 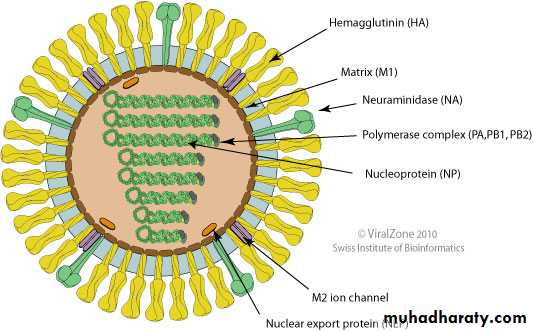 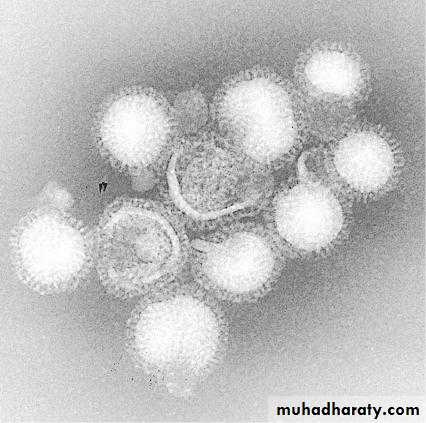 The viral genome is a single-stranded antisense RNA.

The genome consists of an RNA-dependent RNA polymerase, which transcribes the negative-polarity genome into mRNA.
The RNA genome is segmented and consists of eight segments in Influenza A & B and seven segments in influenza C viruses.
These segments code for different proteins which are NS1, NS2, NP, M1, M2, M3, HA, and NA.

The genome is present in a helically symmetric nucleocapsid surrounded by a lipid envelope.
The membrane proteins are known as matrix or M protein and are composed of two components M1 and M2.
Two types of spikes project from the envelope:
(a ) The triangular hemagglutinin (HA)
(b ) The mushroom-shaped neuraminidase (NA) 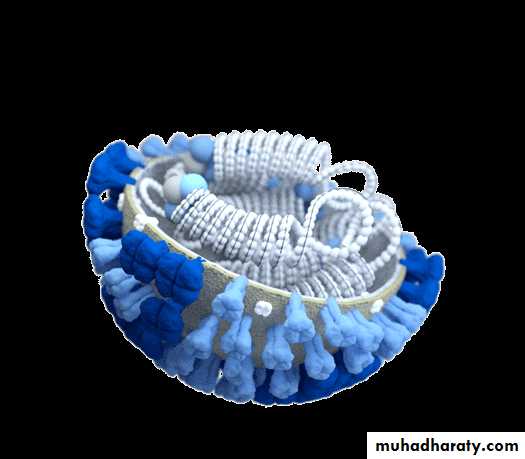 Antigenic variations in the surface glycoproteins, HA and NA, are used to subtype type A viruses.
So far, 18 subtypes of HA (H1–H18)
11 subtypes of NA (N1–N11), in many different combinations, have been recovered from humans and animals.
e.g of current subtypes of Influenza A viruses H1N1 , H2N3

The standard nomenclature system for influenza virus isolates includes the following information: type, host of origin, geographic origin, strain number, and year of isolation.
Antigenic descriptions of the HA and the NA are given in parentheses for type A.
A/Hong Kong/03/68(H3N2)
Classification and Nomenclature

The HA protein of influenza virus binds virus particles to susceptible cells and is the major antigen against which neutralizing (protective) antibodies are directed.
Variability in HA is primarily responsible for the continual evolution of new strains and subsequent influenza epidemics. 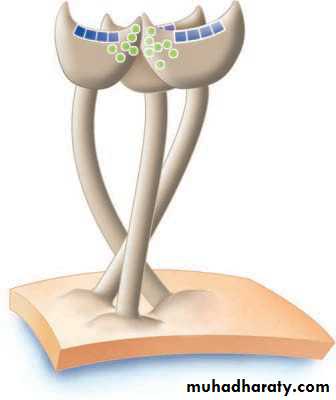 Hemagglutinin binds with the sialic acid cell receptor, and initiates the infection in the host cell.
HA derives its name from its ability to agglutinate erythrocytes under certain conditions.
The HA agglutinates certain RBC , which is inhibited by the neutralizing Abs. This forms the basis of the hemagglutination inhibition test used in the serodiagnosis of influenza.
Hemagglutinin has potency to undergo antigenic variations.

The NA is a glycoprotein and tetramer.
It consists of 100 mushroom-shaped spikes.
The NA functions at the end of the viral replication cycle.
It is a sialidase enzyme that removes sialic acid from glycoconjugates. 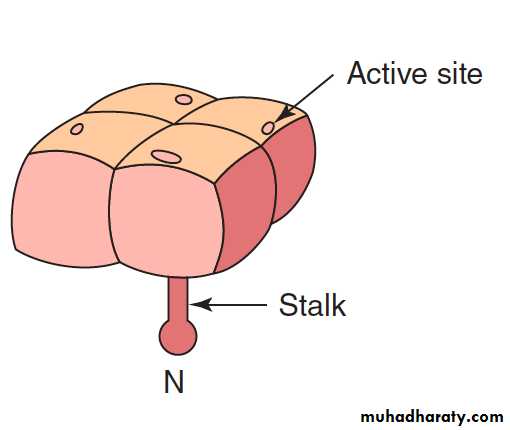 NA facilitates release of virus particles from infected cell surfaces during the budding process and helps prevent self-aggregation of virions by removing sialic acid residues from viral glycoproteins.
It is possible that NA helps the virus negotiate through the mucin layer in the respiratory tract to reach the target epithelial cells.

Source: Wohlbold, Teddy John, and Florian Krammer. "In the shadow of hemagglutinin: a growing interest in influenza viral neuraminidase and its role as a vaccine antigen." Viruses 6.6 (2014): 2465-2494. 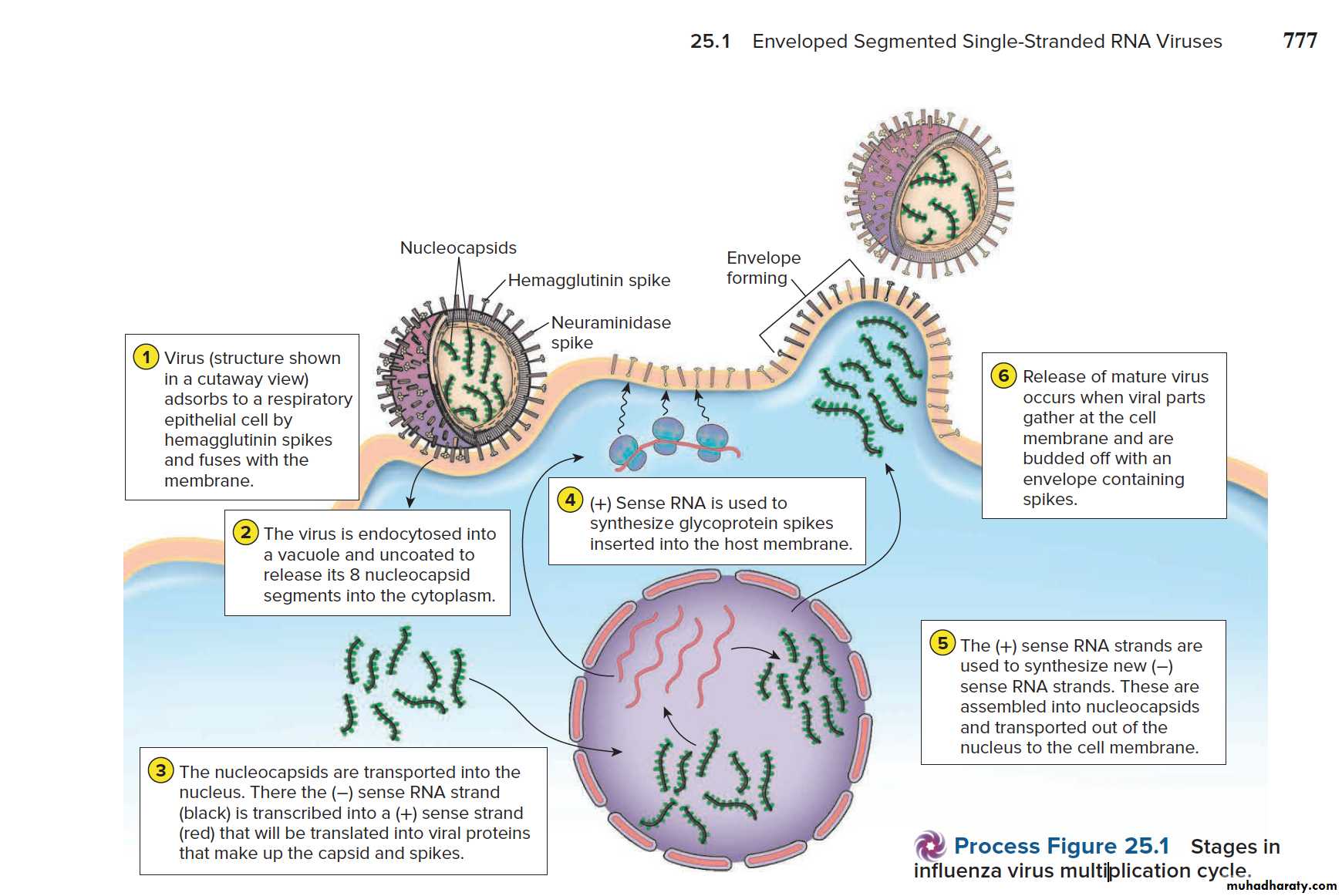 Antigenic shift: Occurs due to major antigenic changes in HA or NA antigens
Caused by replacement of the gene for HA by one coding for a completely different amino acid sequence.
The antigenic shift is characterized by alteration of virtually all the antigenic sites of the HA.
Demonstrated in type A influenza virus only.

Antigenic shift variants appear less frequently, about every 10 or 11 years.

Because the influenza virus genome is segmented, genetic reassortment can occur when a host cell is infected simultaneously with viruses of two different parent strains.
Accounts for the periodic appearance of the novel types of influenza A strains that cause influenza pandemics.
Influenza viruses of animals, such as aquatic birds, chickens, swine, and horses show high host specificity. These animal viruses are the source of the RNA segments that encode the antigenic shift variants that cause epidemics among humans.

Influenza epidemics are of two types.
Yearly epidemics are caused by both type A and type B viruses.
The rare, severe influenza pandemics are always caused by type A virus.
Antigenic shift and antigenic drift are responsible for producing the strains that cause these two types of epidemics.

They appear acutely ill and are usually coughing. Minimal to moderate nasal obstruction, nasal discharge, and pharyngeal inflammation may be present.
Clinical Syndrome

2-Reye’s syndrome is a noted complication of influenza B infection. The condition is seen most commonly in young children and is associated with degenerative changes in the brain, liver, and kidney.

Reservoir, source, and transmission of infection

Infected humans are the main reservoir of infections for influenza A virus.
Respiratory secretions of infected persons are the important source of infection.
The virus is excreted in respiratory secretions immediately before the onset of illness and for 3–4 days thereafter.
Wild aquatic birds are known reservoirs of influenza A.
Influenza B virus only causes epidemics. Infection is from
humans-to-humans. No animal reservoir hosts are known.

During an epidemic of influenza, the clinical diagnosis can be made, but definitive diagnosis depends on the laboratory methods.
Specimens:
Nasal or throat washings or sputum for viral
antigen and viral RNA.
Throat gargles for isolation of viruses.
Serum for viral antibodies.

1- Demonstrating viral antigens directly on cells obtained from the nasopharynx. Immunofluorescence (IF) or enzyme-linked immunosorbent assay (ELIZA) using specific monoclonal antibodies are used to detect viral antigen.
The results of the rapid tests are useful to start treatment with the NA inhibitors within 48 hours of the onset of symptoms. 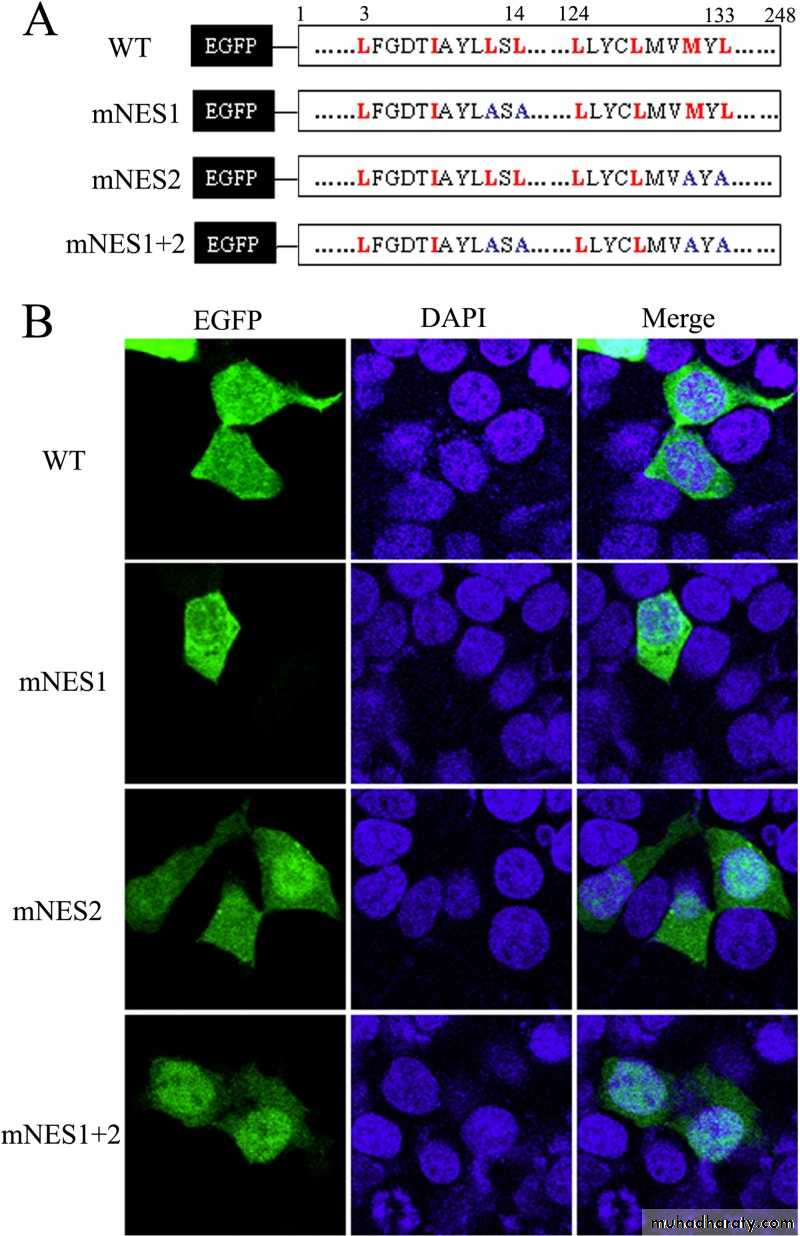 Immunofluorescent staining of some Influenza Ag 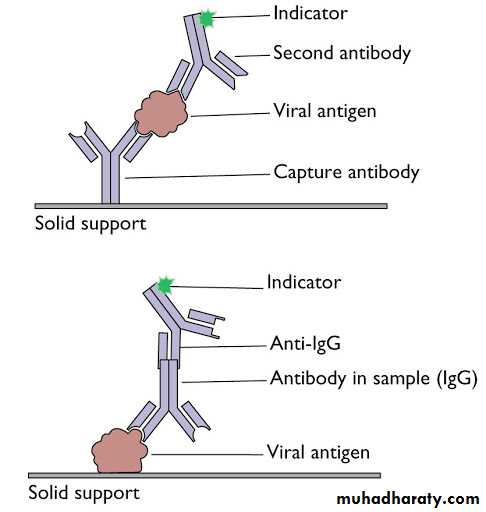 Detection of antigens by ELISA 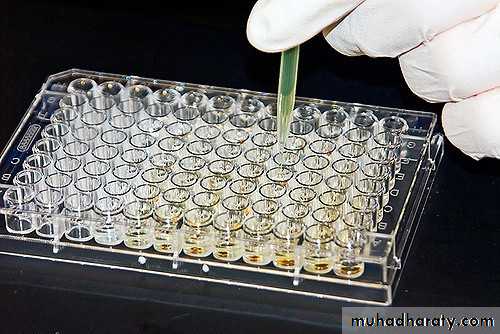 2-Reverse Transcription-Polymerase Chain Reaction (RT-PCR) assay can identify the presence of influenza viral RNA in respiratory specimens with very high sensitivity and specificity.
3- Isolation of the virus
Throat gargles are the specimen of choice.
The specimen is collected in saline broth or a buffered salt solution and is sent immediately to the laboratory, or if delayed is stored at 4°C.
The virus is isolated from the specimen by inoculation into embryonated eggs or into certain cell cultures.

The primary role of cell-mediated immune responses in influenza is believed to be clearance of an established infection; cytotoxic T cells lyse infected cells.
T he cytotoxic T lymphocyte Response appears to be directed against both internal proteins (NP, M) and the surface glycoproteins.
Immunity

Influenza A subtypes H1N1 and H3N2 are most common predominate human influenza viruses. The trivalent vaccine used worldwide contains influenza A strains from H1N1 and H3N2, along with an influenza B strain.
Annual influenza vaccination is recommended for all
children ages 6 months to 18 years and for high-risk groups.

Explain briefly mechanisms of action of Amantadine and Rimantadine and Tamiflu as an antiviral agents used for treatment of influenza virus.