• The replication of viruses in the host cell depends upon the synthesis mechanism of the host cell for manufacture of different viral components. The genetic information for viral multiplication is present in the viral nucleic acid.
Viruses multiply only in living cells. The host cell must provide the energy and synthetic machinery and the low-molecular-weight precursors for the synthesis of viral proteins and nucleic acids.

The viral nucleic acid carries the genetic specificity to code for all the virus-specific macromolecules in a highly organized fashion.
Replication of Viruses

• The multiplication of viruses, both DNA- and RNA viruses, is divided into six main phases:
• 1) Attachment (Binding or Adsorption)
• 2) Penetration (Entry)
• 3) Uncoating
• 4) Biosynthesis
• (Transcription of mRNA and Synthesis of viral components)
• 5) Maturation (Assembly and Packaging)
• 6) Release
Replication of Viruses 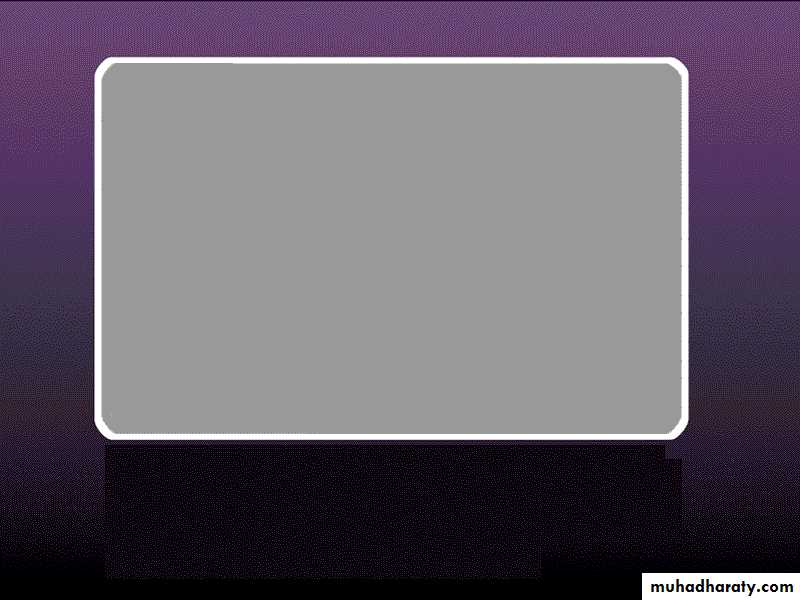 • Attachment or adsorption is the first event in the infection of the cell by a virus. The viruses have attachment sites that attach to the complementary receptor sites on the host cell surface.
• Attachment) Adsorption( interaction of a virion with a specific receptors generally glycoproteins on the surface of a cell. In some cases the virus binds protein sequences
• (eg, picornaviruses) and in others oligosaccharides
• (eg, orthomyxoviruses and paramyxoviruses).
1- Attachment (Binding or Adsorption)
• *HIV virus binds to the CD4 receptor on cells of the immune system,
• *Rhinoviruses bind ICAM-1.
• *Epstein-Barr virus recognizes the CD21 receptor on B cells. 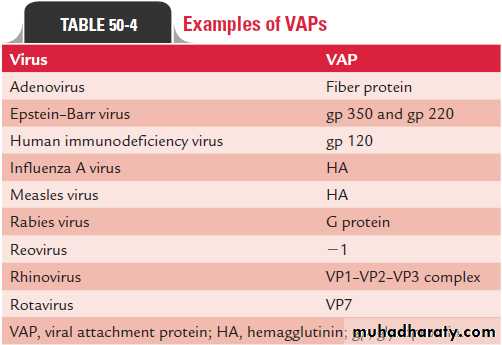 Not all cells in a susceptible host will express the necessary receptors.

For example, poliovirus is able to attach only to cells in the central nervous system and intestinal tract of primates.

Each susceptible cell may contain up to 100,000 receptor sites for a given virus.

The attachment step may initiate irreversible structural changes in the virion. 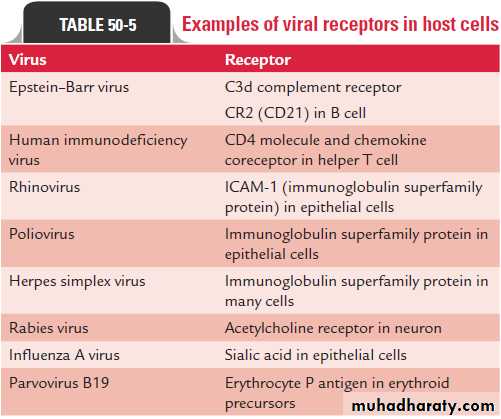 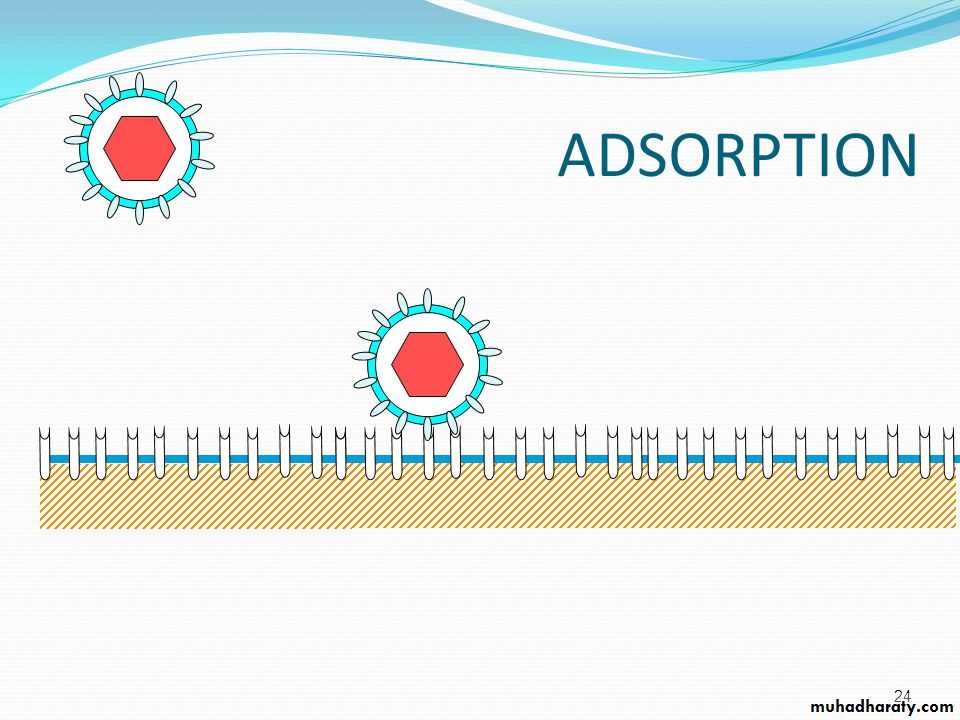 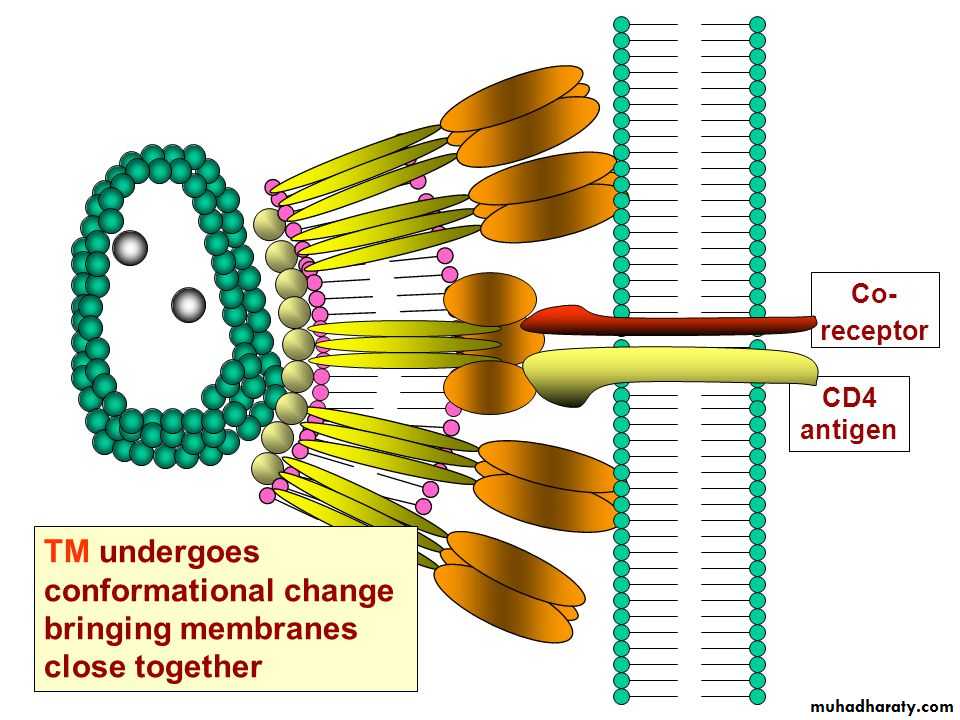 • Depending on their nature, whether enveloped or non-enveloped, the viruses penetrate into cell by different mechanisms:
• * Non-enveloped virus enters the cell by a process known as 1) Endocytosis. The endocytosis is an active process by which nutrients and other molecules are brought into a cell. This process is also known as Viropexis.
After binding, the cell membrane invaginates around the adsorped virus particle, the virus particle is then engulfed by the cell. In some systems, this is accomplished by receptor-mediated endocytosis, with uptake of the ingested virus particles within endosomes.
2- Penetration (Entry) 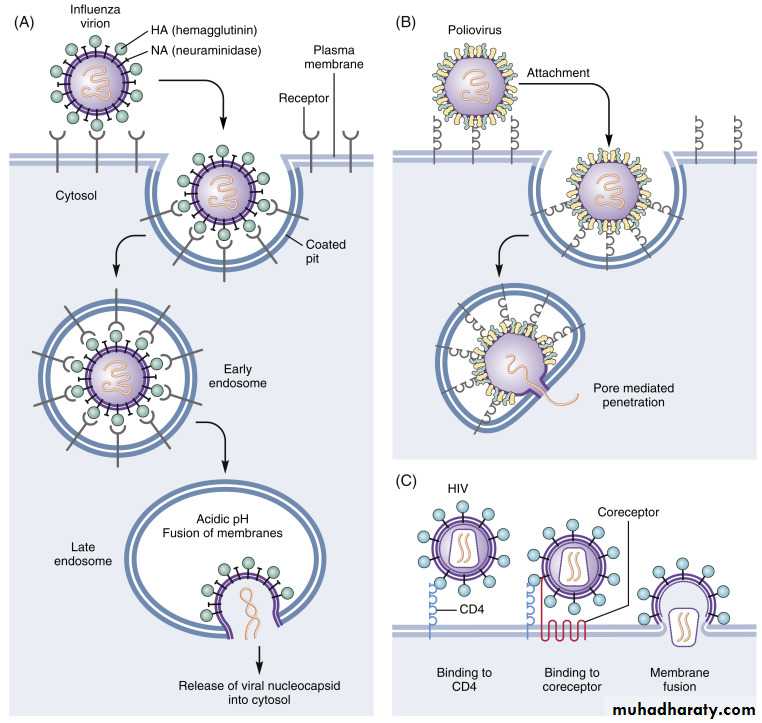 There are also examples of 3) direct penetration of virus particles across of or fusion of the virion envelope with the plasma membrane.


* The enveloped viruses enter the cell by an alternate method called 2) fusion, in which the viral envelope fuses with the plasma membrane and releases the capsid into the cell cytoplasm.
Human immunodeficiency virus (HIV) is a classical example of an enveloped virus, which enters the host cell by this method. 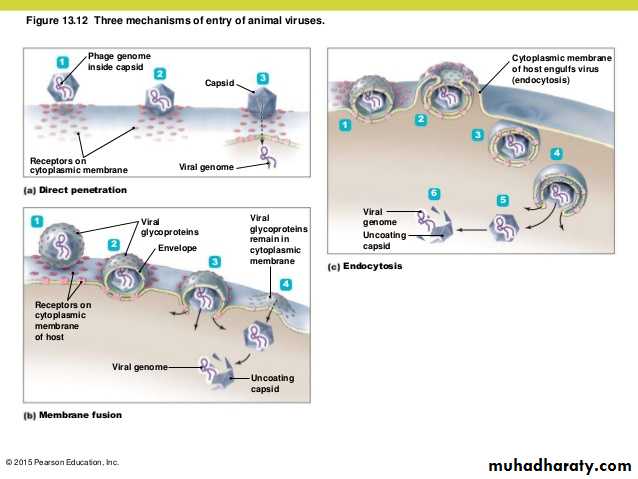 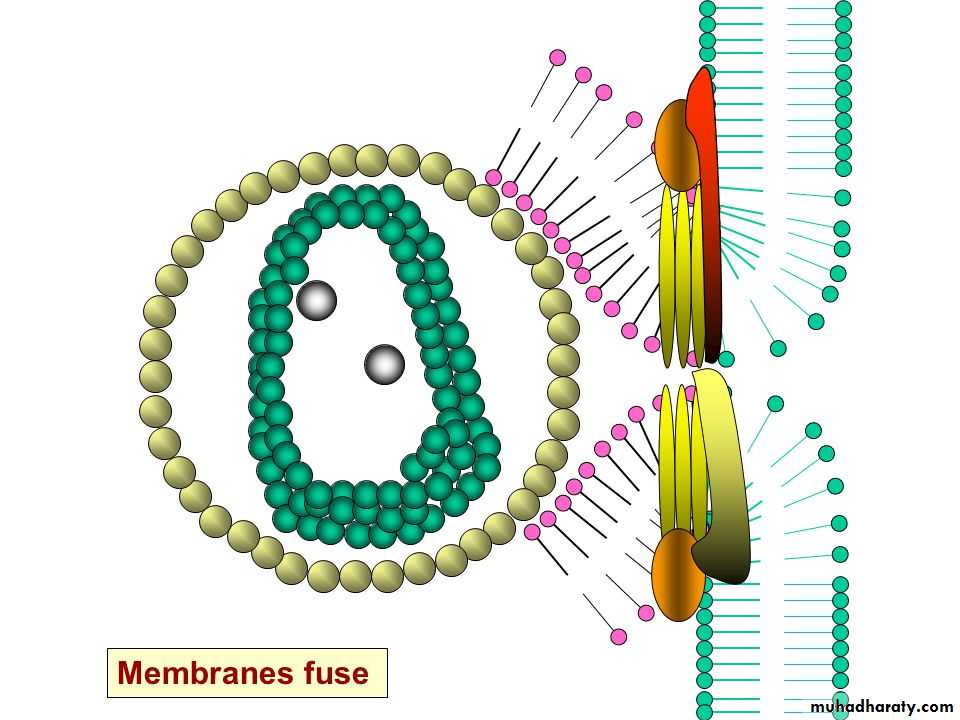 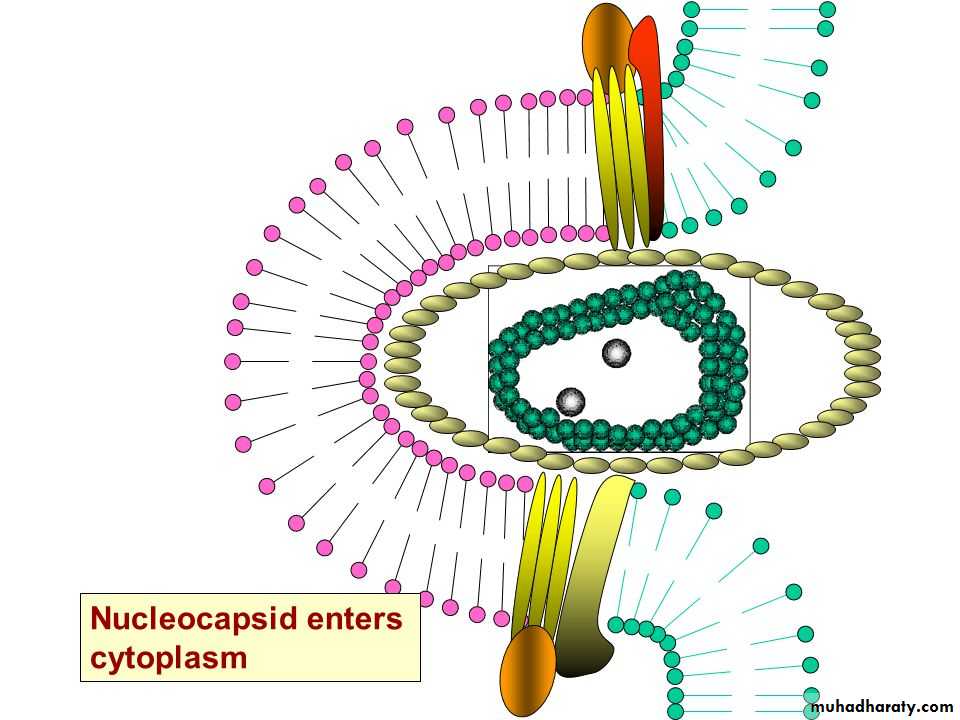 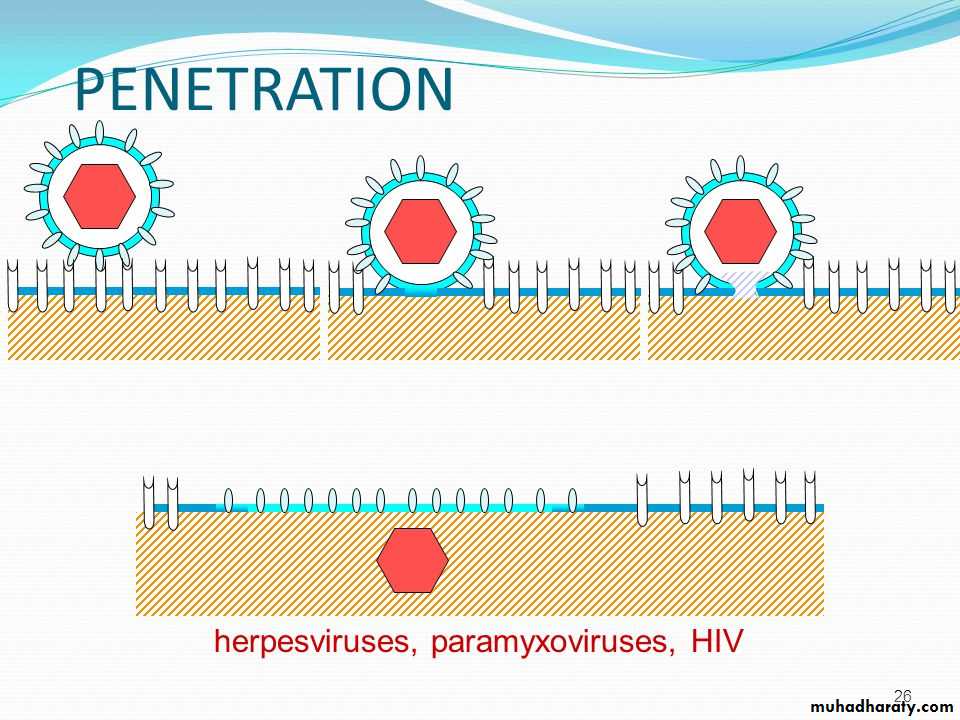 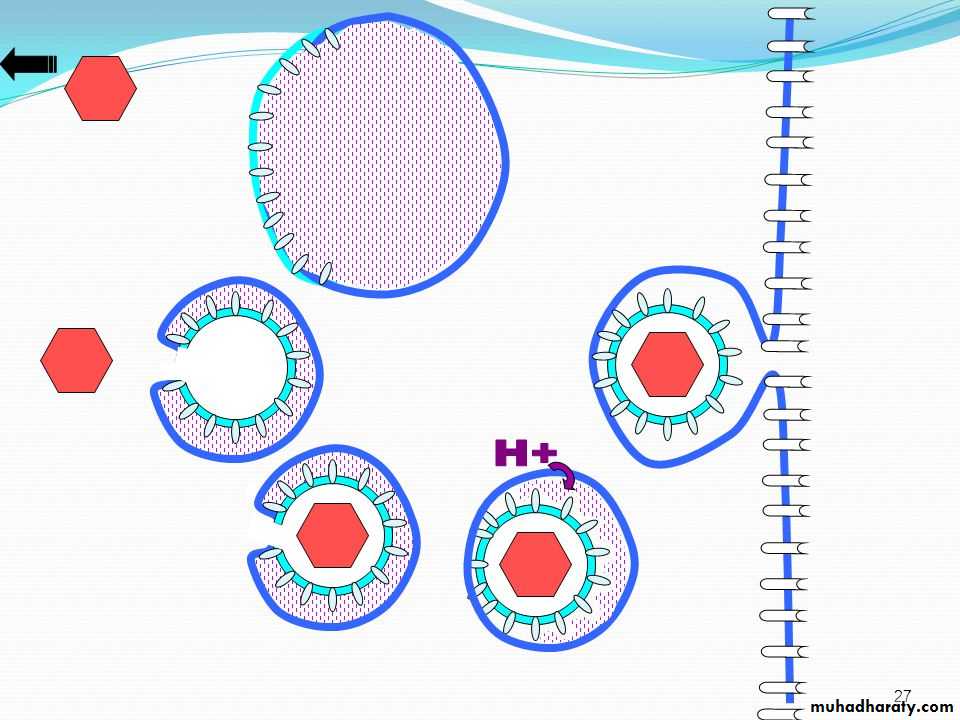 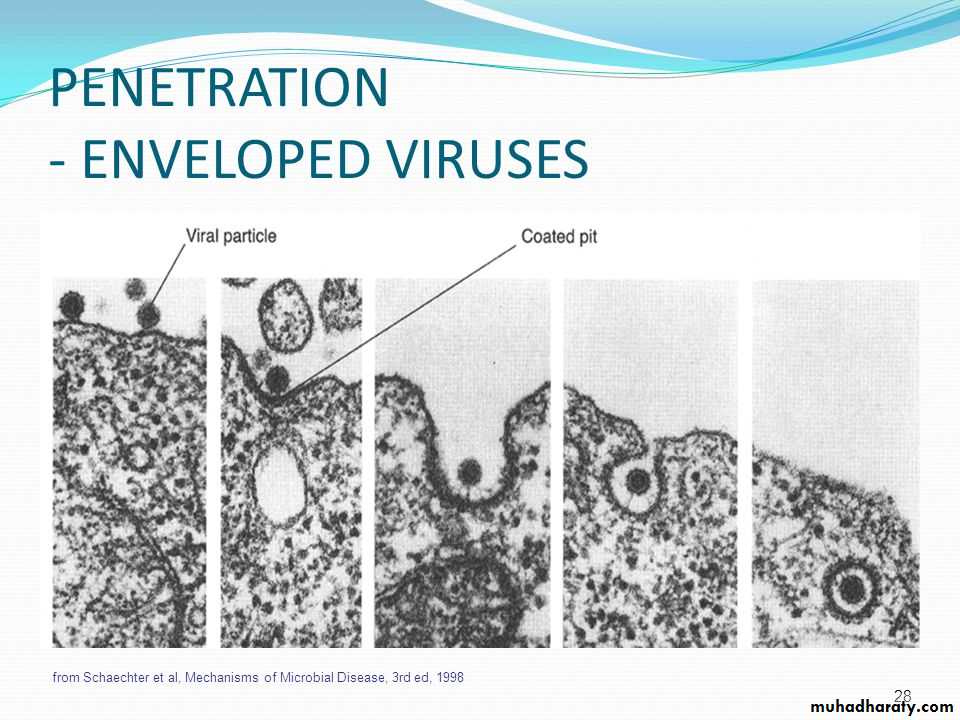 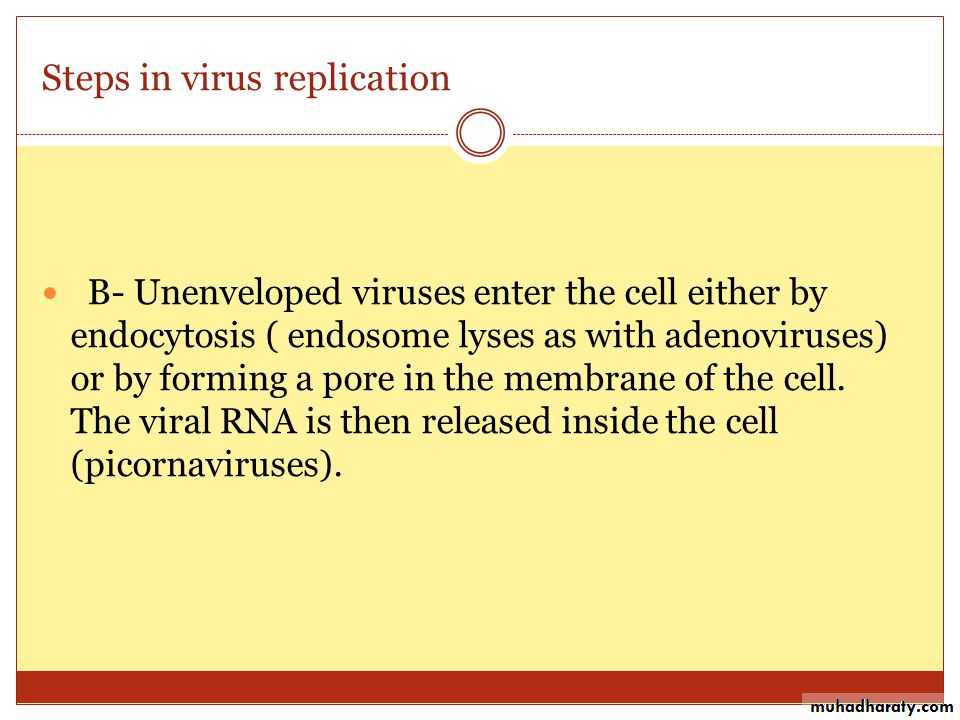 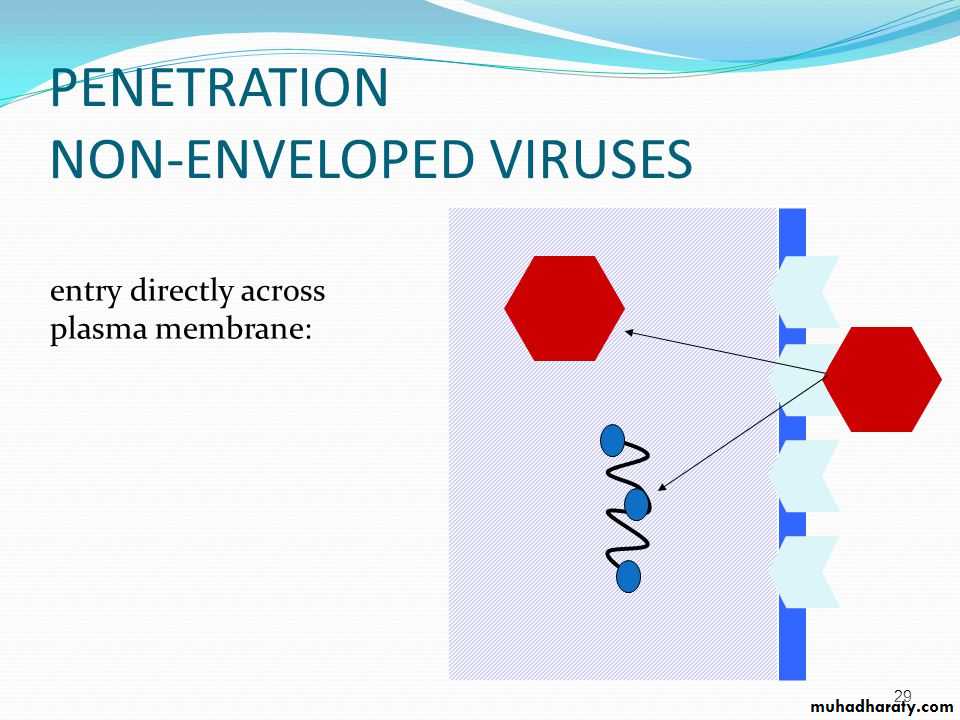 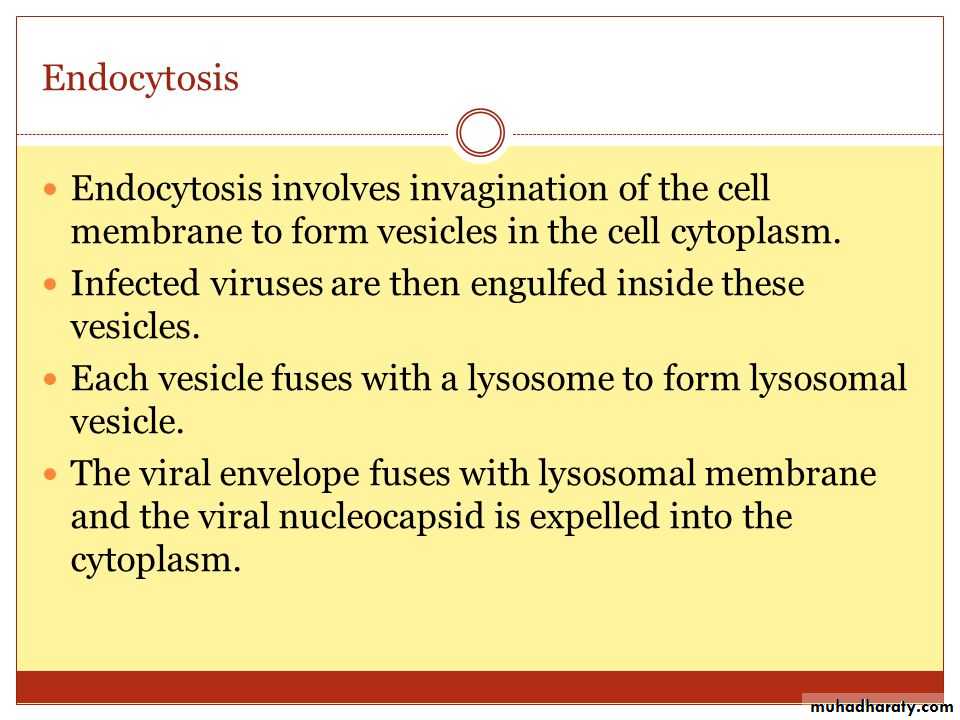 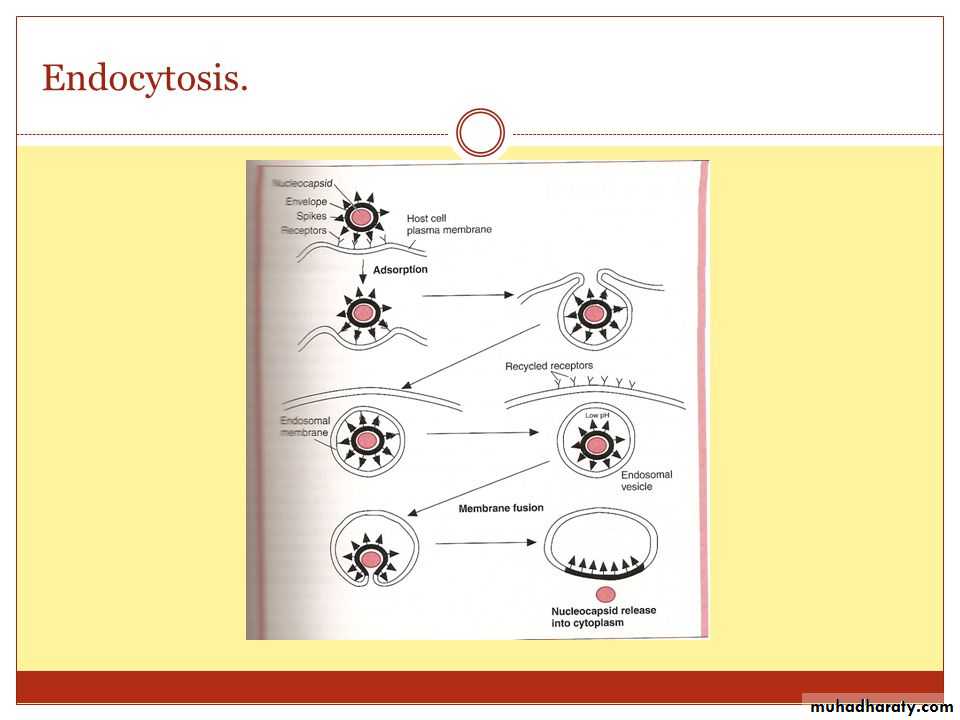 • Uncoating is the process of separation of viral nucleic acid from its protein core. This process apparently varies depending on the nature of the virus causing infection:
• * With most viruses, the uncoating is accomplished by the action of lysosomal enzymes present inside the phagocytic vacuoles and Golgi vesicles of the host cell.
• These lysosomal enzymes degrade the protein of the viral capsid.
• * In some other viruses, uncoating is caused exclusively by enzymes present in the host cell cytoplasm. In case of poxvirus, the uncoating is effected by the action of a specific enzyme encoded by the viral DNA, which is synthesized soon after infection.
3- Uncoating

The protein coat of virus is removed by the host cell enzymes.

After that, the genome may be released as free nucleic acid (picornaviruses) or as a nucleocapsid (reoviruses).

The infectivity of the parental virus is lost at the uncoating stage.

• The sites of viral synthesis depend on the type of virus, whether RNA virus or DNA virus.
• Biosynthesis of DNA viruses
DNA viruses replicate their DNA in the nucleus of the host cell by using viral enzymes. However, they synthesize their capsid and other proteins in the cytoplasm by using host cell enzymes. Subsequently, the proteins enter into the nucleus and assemble with the newly synthesized DNA to form virions, and then these virions are transported along with endoplasmic reticulum to the membrane of the host cell for release. Most of the DNA viruses (herpesvirus, papovavirus, adenovirus, and hepadnavirus) synthesize their nucleic acid in the host cell nucleus. Poxvirus is an exception, because all of its components are synthesized in the cytoplasm.
4- Biosynthesis

In DNA viruses, mRNA can be formed using the host’s own RNA polymerase to transcribe directly from the viral DNA.


In RNA viruses, the host polymerase does not work from RNA molecules...therefore they produce their mRNA by several different routes:
1- In ds RNA viruses:one strand is first transcribed by viral polymerase into mRNA.
2- In ss RNA viruses....there are three routes to the formation of mRNA:
A- If the ss RNA virus has the same base sequence as that required +ve sense….it can be used directly as mRNA.

Positive-strand RNA viruses (+ssRNA viruses) are a group of related viruses that have positive-sense, single-stranded genomes made of ribonucleic acid.

The positive-sense genome can act as messenger RNA (mRNA) and can be directly translated into viral proteins by the host cell's ribosomes.

Positive-strand RNA viruses encode an RNA-dependent RNA polymerase (RdRp) which is used during replication of the genome to synthesize a negative-sense antigenome that is then used as a template to create a new positive-sense viral genome.
In a single-stranded RNA virus, a plus strand is one having the same polarity as viral mRNA and containing codon sequences that can be translated into viral protein.

A minus strand is a noncoding strand that must be copied by an RNA-dependent RNA polymerase to produce a translatable mRNA.
Two important examples of +ssRNA viruses are severe acute respiratory syndrome coronavirus 2 (SARS-CoV-2) and Hepatovirus A, which cause coronavirus and hepatitis A, respectively.

Negative-sense viral RNA is complementary to mRNA and thus must be converted to positive-sense RNA by an RNA polymerase before translation
Negative-strand RNA (NS RNA) viruses, which may have segmented or nonsegmented genomes, are to be blamed for plentiful of grave viral diseases such as measles, rabies, influenza, Crimean-Congo hemorrhagic fever, Ebola, and Lassa fevers in both humans and animals. 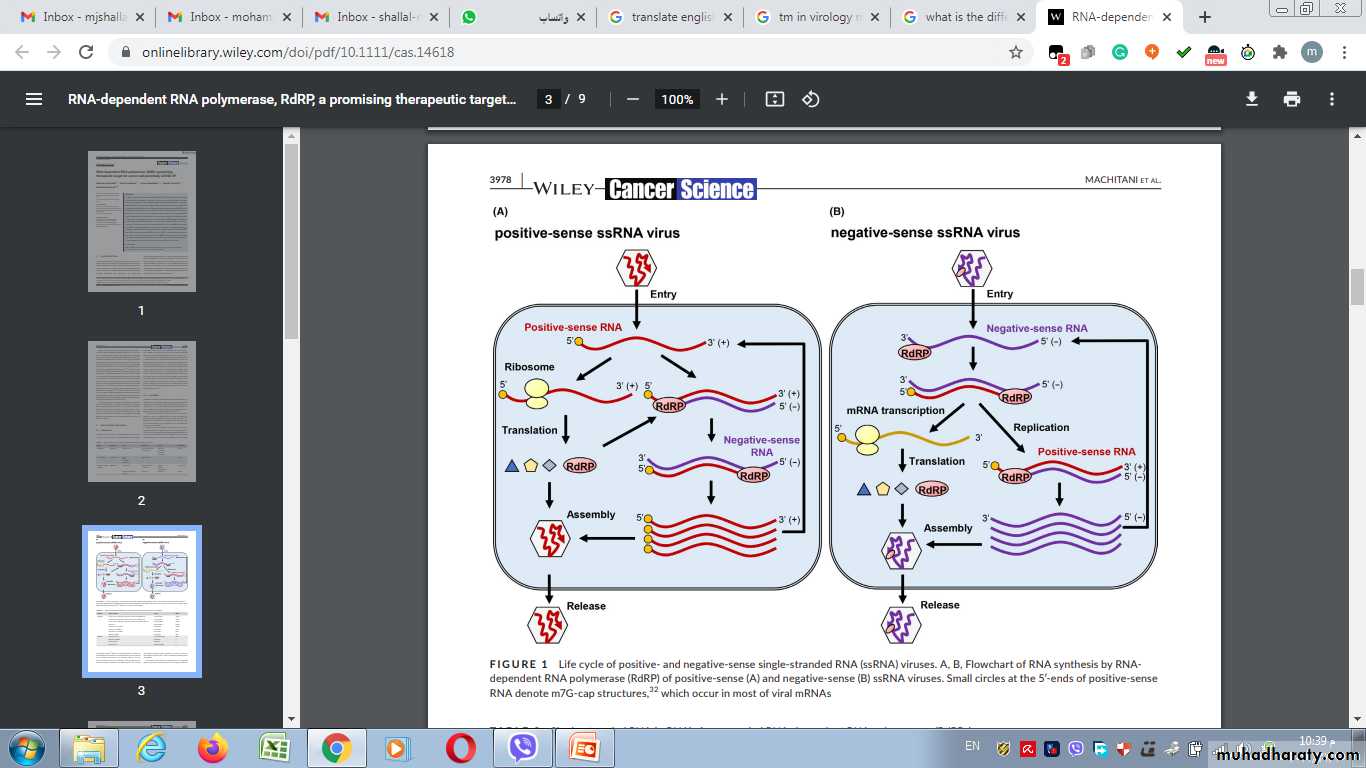 Once viral mRNA has been formed, translation occurs in the host cytoplasm using host ribosome to synthesize viral proteins......At this phase, the virus components appear as separate NA and a separate protein coats.
C- In reverse transcribed RNA (RT,( the positive sense ss RNA is first made into a negative sense ss DNA using the viral reverse transcriptase enzyme.
B-If the strand has not the same base sequence as that required for translation (-ve sense(…it must be transcribed into a positive sense strand which can then act as mRNA.

The assembly of the protein capsid is the first step in viral maturation ) viral NA enters into a capsid to be assembled into mature infective virus (virion()
• The capsids of many enveloped viruses, such as orthomyxoviruses and paramyxoviruses are enclosed by envelopes, which consist of proteins, lipids, and carbohydrates.
• During maturation, the envelope protein is encoded by the viral genes and is incorporated into the plasma membrane of the infected host cell.
• In contrast, the envelope lipids and carbohydrates are encoded by host cell genes, but not by viral genes, and are present in the plasma membrane. The envelope develops around the capsid by a process called budding.
5- Maturation

The assembly of various viral components into virions may take place in the nucleus (e.g., herpesvirus and adenoviruses) or cytoplasm (e.g., picornaviruses and poxviruses).

Subsequently, nucleocapsid is surrounded by an envelope, which is derived from the host cell membrane during the process of budding. 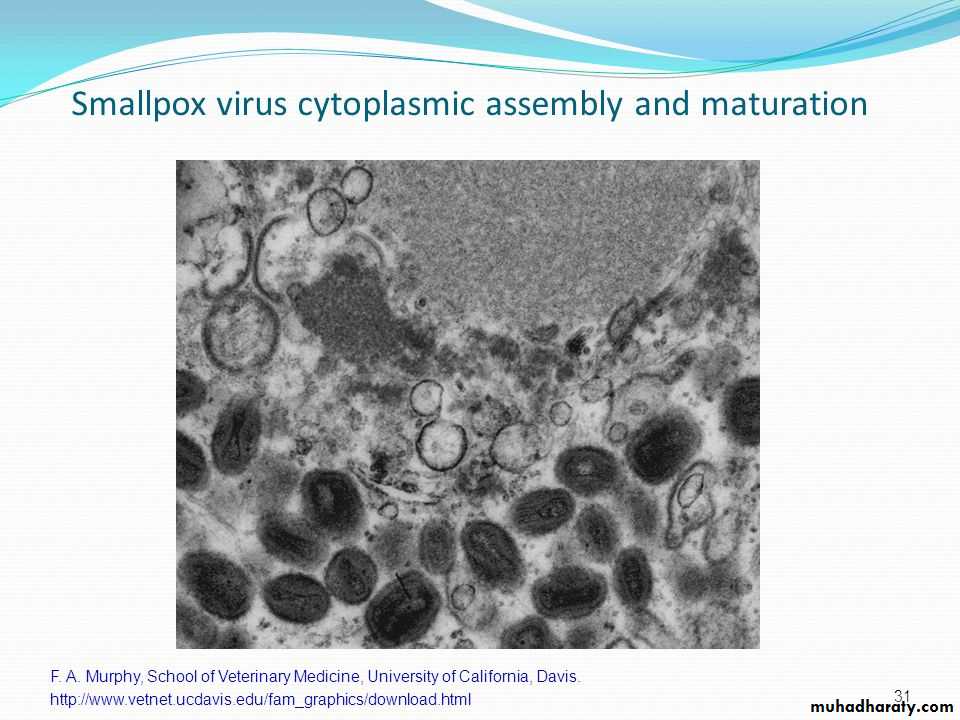 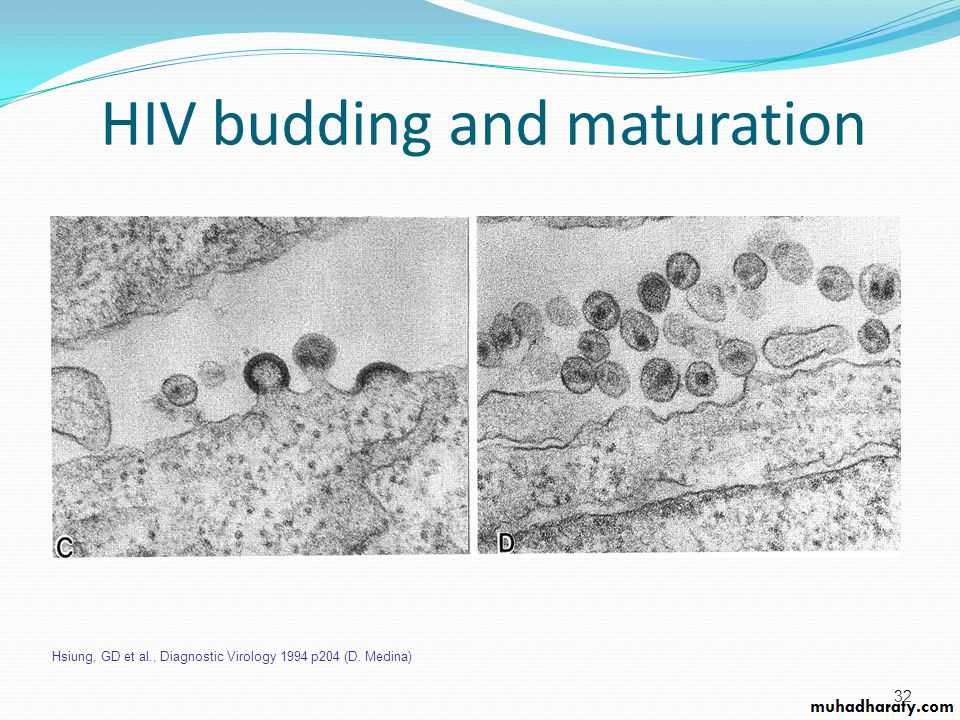 • Release of the completed viruses is the last step in the replication of viruses.

• In case of animal viruses, the release of progeny virions usually occurs without cell lysis.
• The host cell is unaffected and goes on dividing to the daughter cells, which continue to release virions.
• Progeny virions are released into the surrounding environment and may affect new host cells.
• Budding does not immediately kill the host cell and in some cases the host cell survives.
•
6- Release

Non-enveloped viruses, however, release through rupture in the host cell plasma membrane. This type of release usually results in the death of the host cell.

A single infected cell may release a large number of daughter virions.

The time taken for a single cycle of replication is different from virus to another. (from modest numbers to more than 100,000 particles) during (6–8 hours in picornaviruses) to (more than 40 hours in some herpesviruses)).
non-enveloped viruses are released from the cell either in a dramatic burst or rupture of infected cell )poliovirus(
Or in a steady stream or budding from the cell enveloped viruses (Herpesvirus and myxovirus( 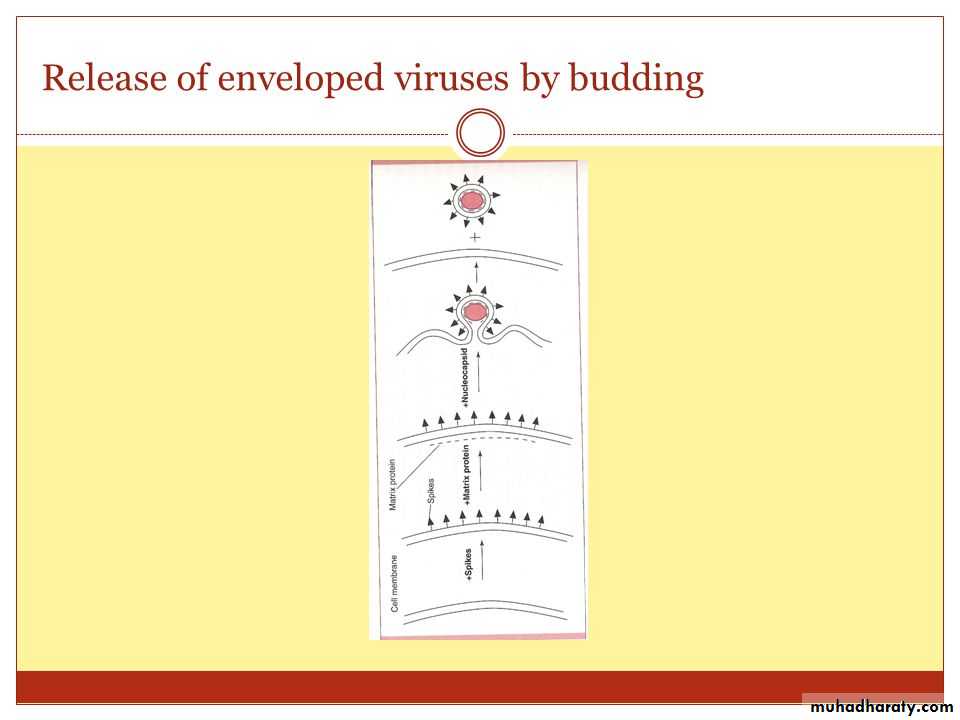 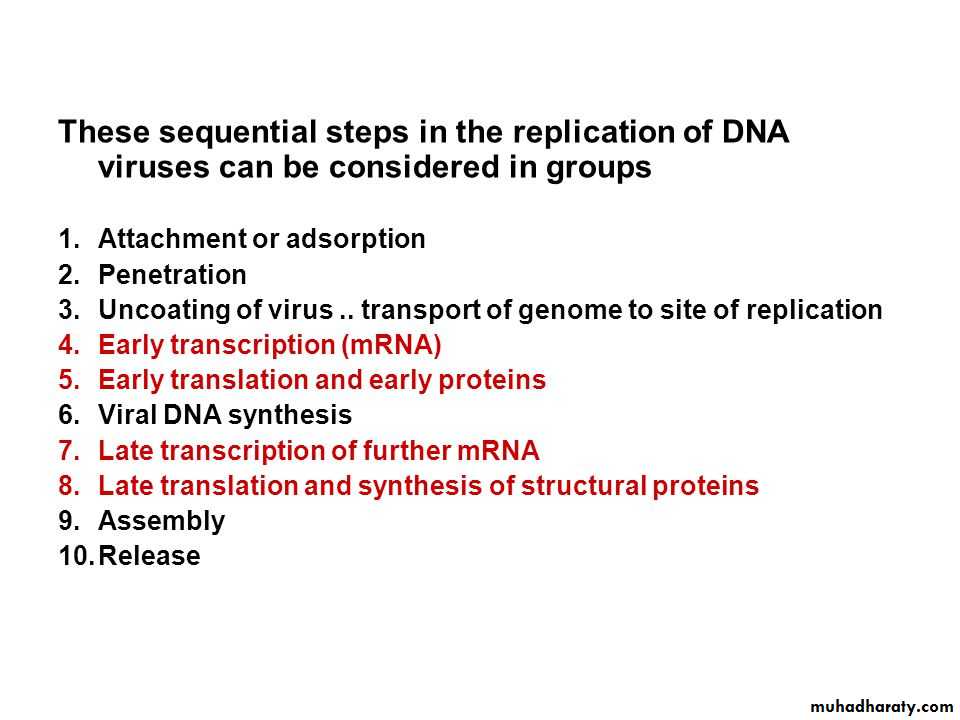 In a cycle of replication, the virus cannot be demonstrated inside the host cell from the stage of penetration till the appearance of mature daughter virions.

Soon after interaction with a host cell, the infecting virion is disrupted and its measurable infectivity is lost. This phase of the growth cycle is called the eclipse period.

followed by an interval of rapid accumulation of infectious progeny virus particles.

In some cases, as soon as the viral nucleic acid enters the host cell, the cellular metabolism is redirected exclusively toward the synthesis of new virus particles and the cell will be destroyed. 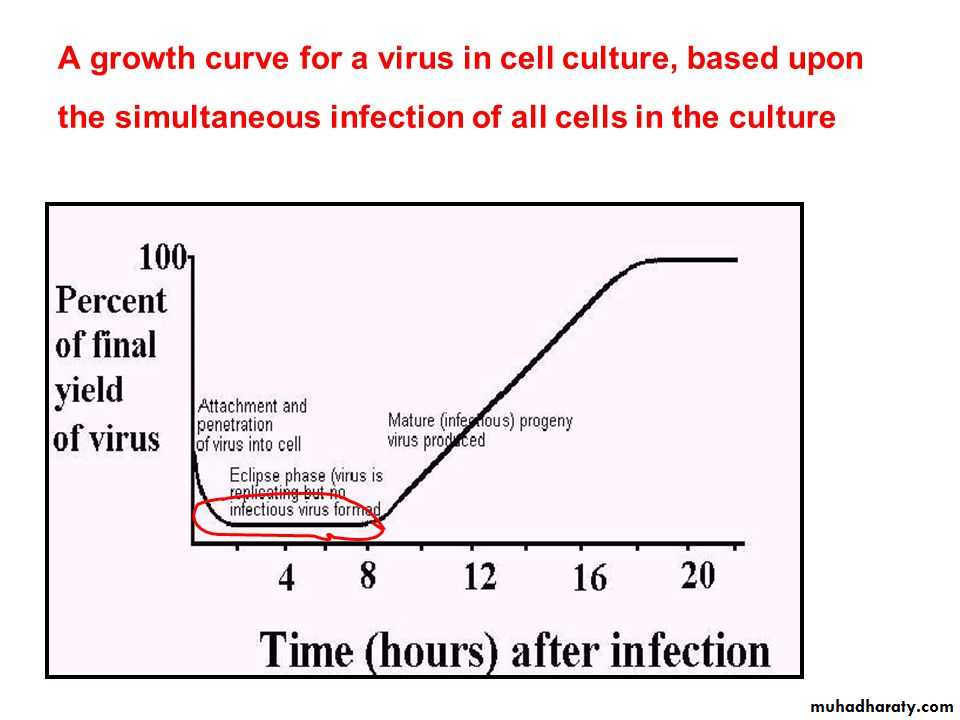 A latent infection may produce:


1) with the persistence of viral genomes.

2) the expression of no or a few viral genes, and the

survival of the infected cell.

3) In other cases, the metabolic processes of the host cell are not altered significantly, although the cell synthesizes viral proteins and nucleic acids, and the cell is not killed.
Latent infection

• During replicative cycles of virus, many types of abnormal replicative cycle do occur. These are as follows:
• 1)Incomplete viruses: Due to defect during assembly of viral components, some of the daughter virions that are produced may not be infective.
• Example of such incomplete virus is the influenza virus that shows a high hemagglutination titer but with a low infectivity.
• This is known as von Magnus phenomenon.
Abnormal Replicative Cycles

• 2)Pseudovirions: that occasionally enclose host cell nucleic acid instead of viral nucleic acid. These, therefore, are non-infective and lack the capability to replicate.
Abnormal Replicative Cycles
3)Abortive infections: In this type of infection, the virus components may be synthesized but the maturation is defective. The progeny virions are either not released or are noninfectious. Abortive infections fail to produce infectious progeny, either because of
1) the cell may be non-permissive and unable to support the expression of all viral genes (infection of the wrong host cells by the virus)
2) the infecting virus may be defective (lacking some functional viral gene).

4)Defective viruses: Some of the viruses that are genetically defective do not produce fully formed virions.


They produce fully mature virions only in the presence of helper viruses which supplement the genetic deficiency in the defective viruses.

Hepatitis D virus and Adeno-associated satellite viruses are the examples of defective viruses, which replicate only in the presence of helper viruses, such as hepatitis B virus and adenovirus, respectively.

CD is an abbreviation “for cluster of differentiation”. CD molecules are cell surface markers which are very useful for the identification and characterization of leukocytes and the different subpopulations of leukocytes.
The transmembrane (TM) domains of viral fusion proteins are required for fusion, but their precise role is unknown. G protein, the fusion protein of vesicular stomatitis virus