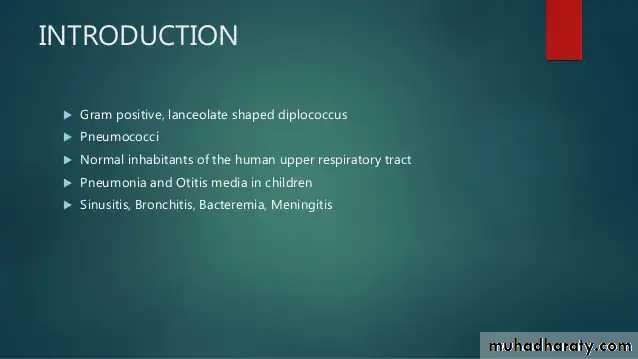 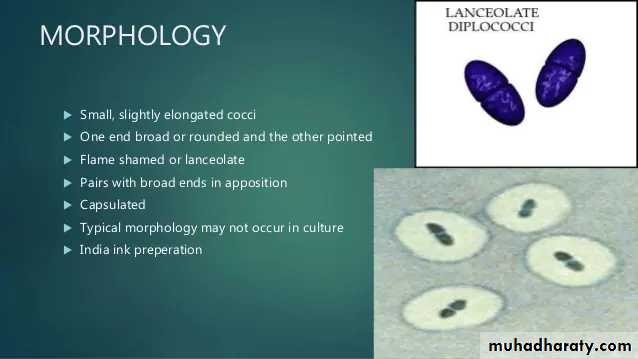 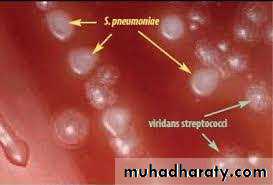 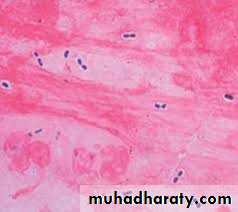 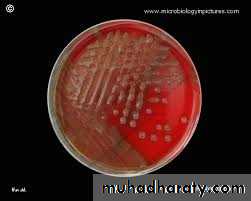 • It posses a number of Ags:
• 1- Peptidoglycan
• 2- Teichoic acid (Specific Carbohydrate)
• 3- M-protein
• 4- Polysaccharide capsule are used to determine the type specificity of organisms and virulence. so the pneumococcus can be serologically classified into more than 90 types
• The capsular polysaccharides (SSS) Typing can carried out by:
• 1- Agglutination of cocci with type – specific antisera (Ag + Ab reaction).
• 2- Precipitation of capsular polysaccharide with specific serum.
• 3- Capsular swelling reaction (Quellung reaction). Suspension of pneumococci is mixed with specific anti-polysaccharide serum of the same type or the polyvalent antiserum on slide, the capsule swells. This reaction useful for rapid identification and for typing of the microorganism (Figure 4).

It’s a normal flora of nasopharynx and oropharynx in 15% of children and 5% of adults.
They produce disease through their ability to multiply in the tissues and the virulence of pneumococci is a function of it’s capsule which prevents ingestion by phagocytes.
The normal respiratory mucosa posses natural resistance to the pneuomococci, many factors lower this resistance and predispose to infection, like:
1- Respiratory viral infection, bronchial obstruction, respiratory tract
injury, alcohol or drug intoxication .
2- Organism passes from person to another via respiratory secretions and aerosols.

The onset of pneumococcal pneumonia is usually sudden with fever, chills and sharp pleural pain, with blood or rusty sputum. In the early disease, when the fever is high, bacteremia is present in about 10-20% of cases, causes severe complication as meningitis, which is the most serious infection common in children, endocarditis, septic arthritis.
1- Acute bacterial pneumonia
A leading causes of death in the aged and those whose resistance is impaired. This disease caused mostly by Strep. pneumonia. Pneumonia is preceded by an upper or middle respiratory viral infection, which predisposes to Strep. pneumonia infection of pulmonary parenchyma, by the mechanisms of:
• 1) increased volume and viscosity of secretions that are more difficult to clear,
• 2) Secondary, inhibition of the action of bronchial cilia by viral infection.


• 2- Otitis media
• Which is the most common bacterial infection of children, is most caused by pneumococcus, followed by Haemophils influenza and Moraxella catarrhalis.
• The traditional treatment of it with a Beta-lactam antibiotics (with or without a penicillinase-inhibitor) has been threatened by the spread of penicillin -resistant pneumococci.
• 3- Bacteremia/ sepsis
• In the absence of a focus of infection is commonly caused by pneumococcus, especially in splenectomized individuals.
• 4- Meningitis
• H. influenzae was leading cause of bacterial meningitis in U.S. After a vaccine was developed against this organism, Strep. Pneumonia became the most common cause, which is high mortality rate even when treated. 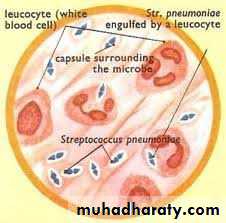 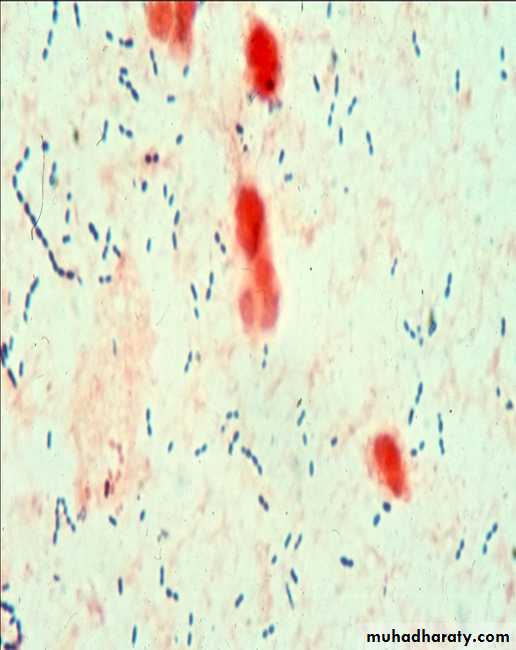 • Enriched media with blood or serum necessary for growth, produce alpha-hemolysin on blood agar growth is enhanced by 5-10% CO2.
• On solid media: form a small round colonies dome-shaped at first, few hours later it undergoes some autolysis in the center of the colony and become flat while the edges are raised. 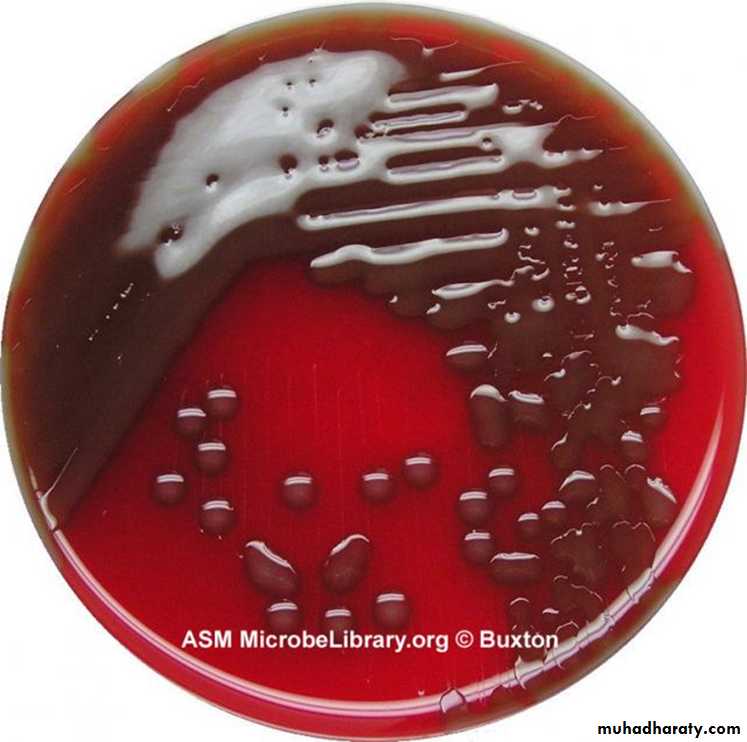 • 1- Optochin sensitivity
• 2- Lysis the cell by bile acids
• 3- Capsular swelling (the Quellung reaction) is observed when sputum treated by type-specific antisera as immunological test.
• 4- Inuline fermentation to different from Sterp. viridans
• Animal pathogenicity :
• mice are most susceptible to pneumococcal infection and used for diagnosis, animal will die in 18-48h. 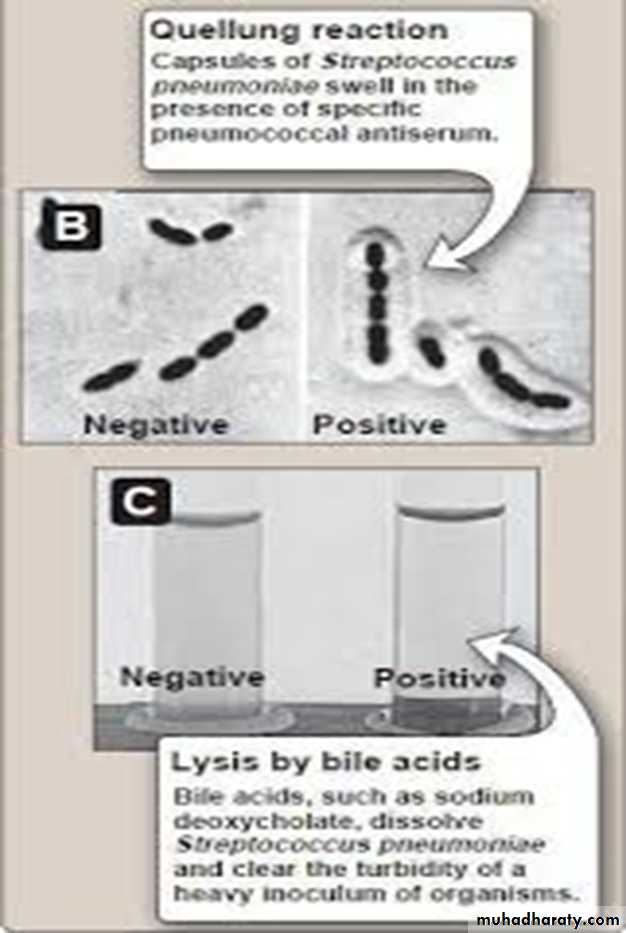 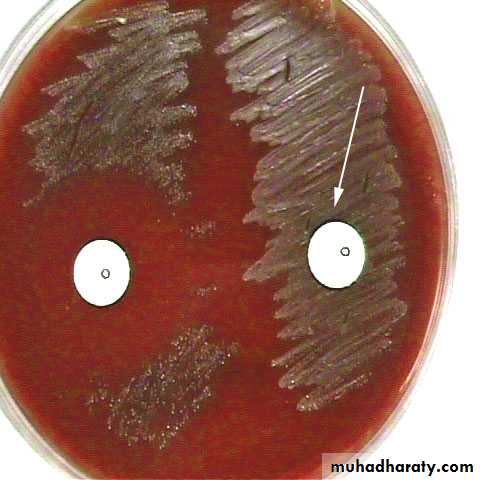 Include species : Sterp. nitis , Sterp. mutans and Sterp. salivarins
Large group of commensal streptococci of the upper respiratory tract,
Either alpha-hemolytic producing a green coloration on blood agar (hence the name viridans in latin it is green )
They possess no Lancefield antigens
In general pathogenicity is low Pathology
The most abundant organism in mouth
One member of the group S. mutans is the etiologic agent of dental caries
Others may be envolved in other mouth or gingival infections
They are the most common causes of subacute bacterial endocarditis. 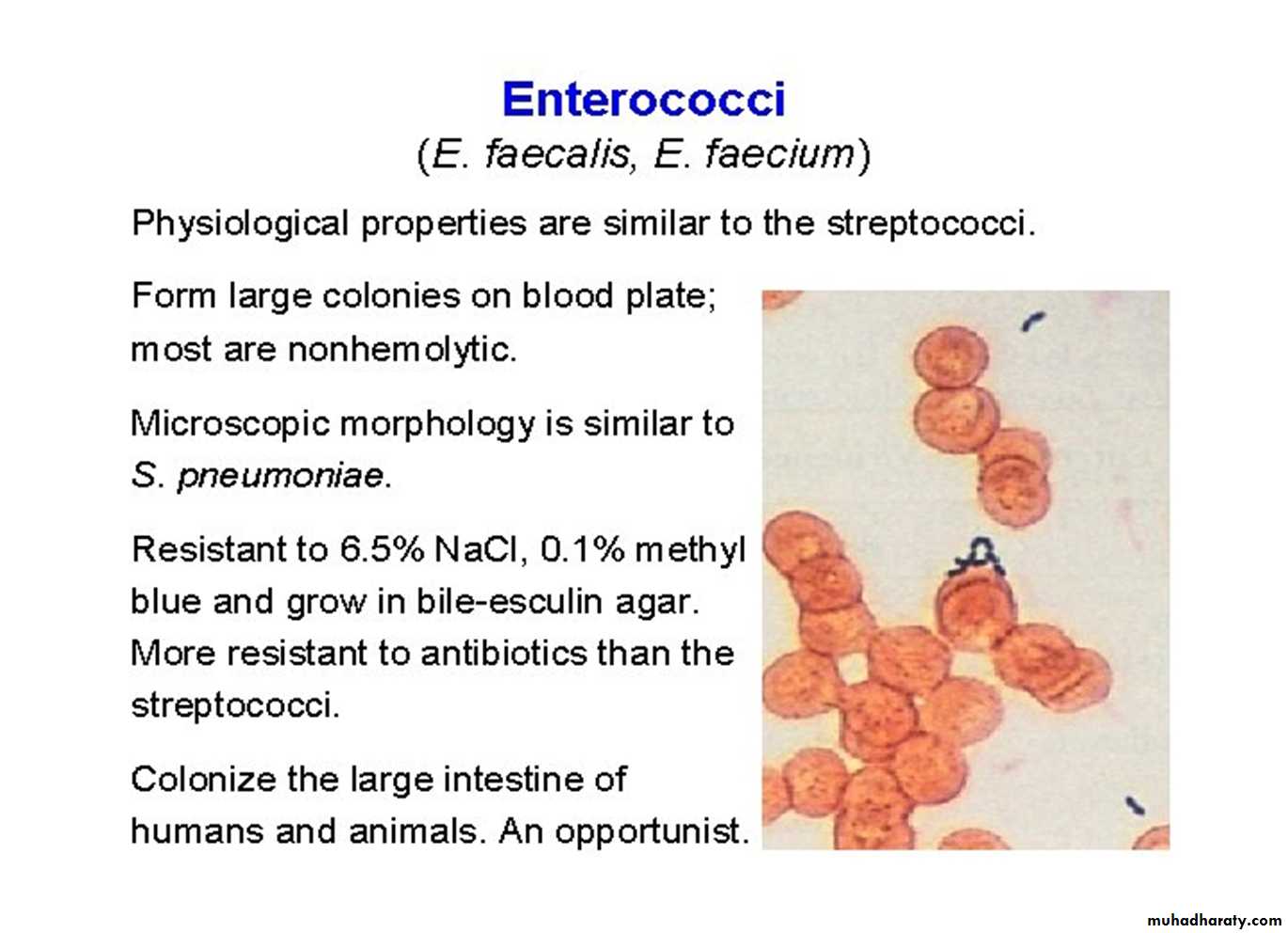 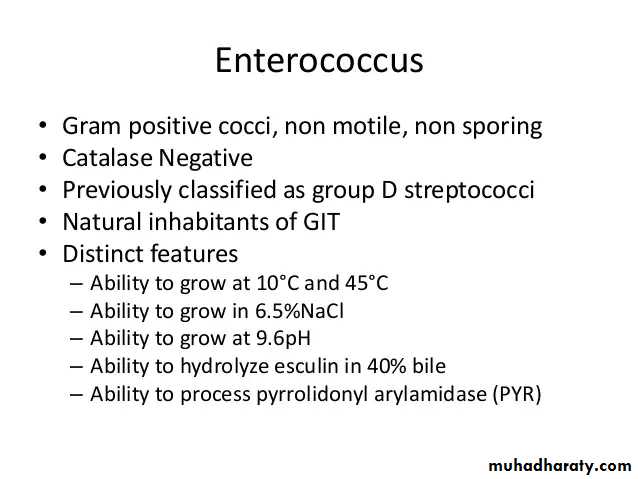 • It can grow on ordinary media and also on macConkey’s on which it gives deep pink colonies.
• Varies Hemolysis
• PYR +ve


• always present in colon. If it leaves its normal habitat (the colon), it can cause suppurative lesions, UTI, peritonitis, or puerperal sepsis.Multi-drug resistant, e.g. Vancomycin resistant enterococci (VRE) have developed and have been spreading. 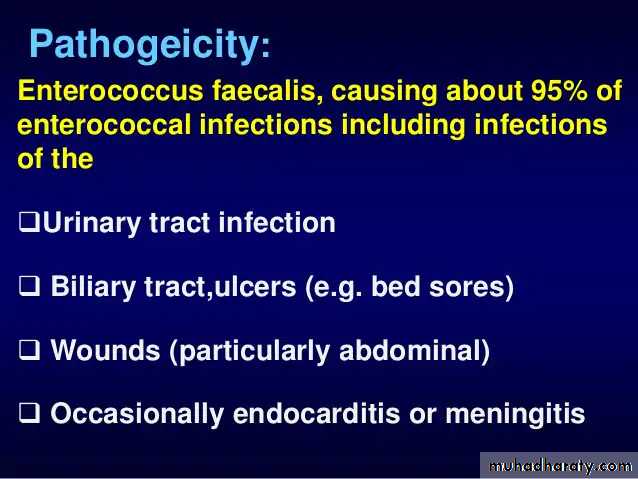 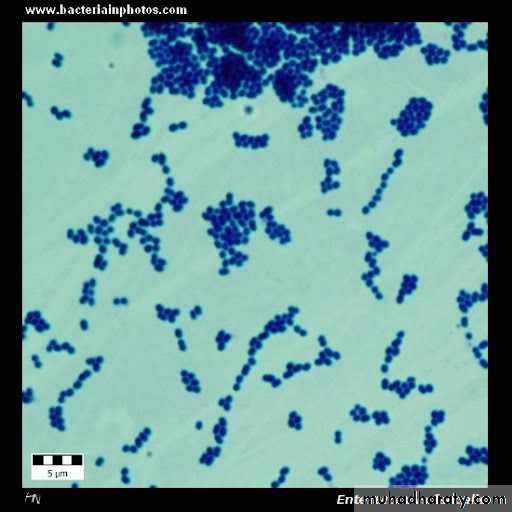 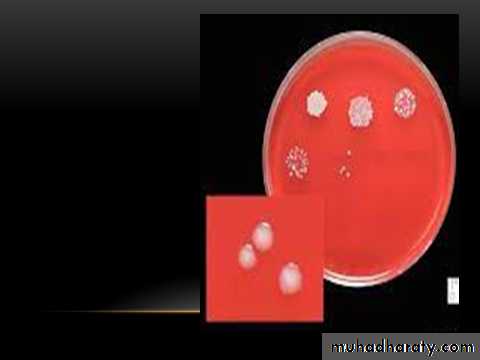 (Streptococcus bovis, Streptococcus equinus ):
Like the enterococci, Streptococcus bovis is hardy growing in 40% bile (but not in 6.5% NaCl).
It lives in the G.I. tract, and it causes similar diseases.
An important unique property is that there is a remarkable association between S. bovis infection and colon cancer!!! In some series 50% of people with S. bovis
bacteremia have a colonic malignancy. We do not know if S. bovis is a cause of colon cancer or just a marker of the disease. 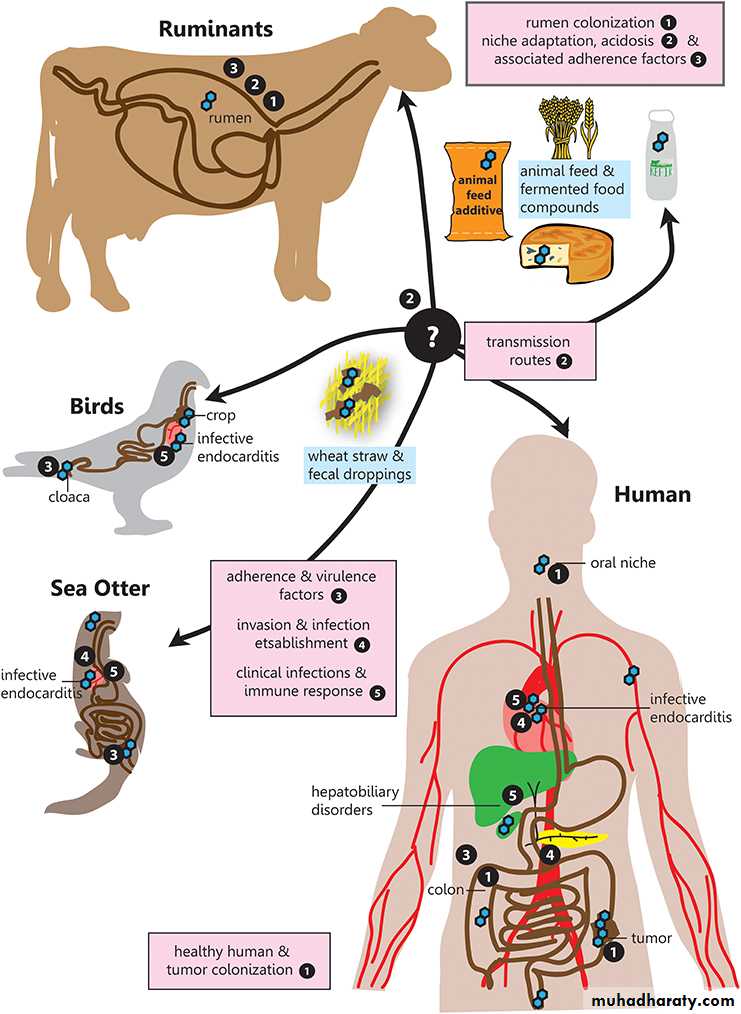