For the Innate IR – a variety of lymphocytes, granulocytes, and monocytes can respond

For the Adaptive IR – lymphocytes must contact Ag in either tissue, lymph, or blood

Inflammation
It is a physiologic response to a variety of stimuli such as infections and tissue injury.
It represents a body defence reaction in order to eliminate or limit the spread of injurious agent, followed by removal of the necrosed cells and tissues.
The cells and molecules of host defence normally circulate in the blood, and the goal of the inflammatory reaction is to bring them to the site of infection or tissue damage and set them into action.
Inflammatory responses are mediated by chemical substances (cytokines), derived from plasma & cells.


Steps of the inflammatory response (5Rs)
Recognition of the injurious agent
Recruitment of leukocytes
Removal of the agent
Regulation (control) of the response
Resolution (repair).

Depending upon the defense capacity of the host and duration of response, inflammation can be classified as acute and chronic.

It is a rapid response to injury or microbes and other foreign substances that is designed to deliver leukocytes and plasma proteins to sites of injury.

It occurs before the immune response becomes established and is aimed primarily at removing the injurious agent and limiting the extent of tissue damage. 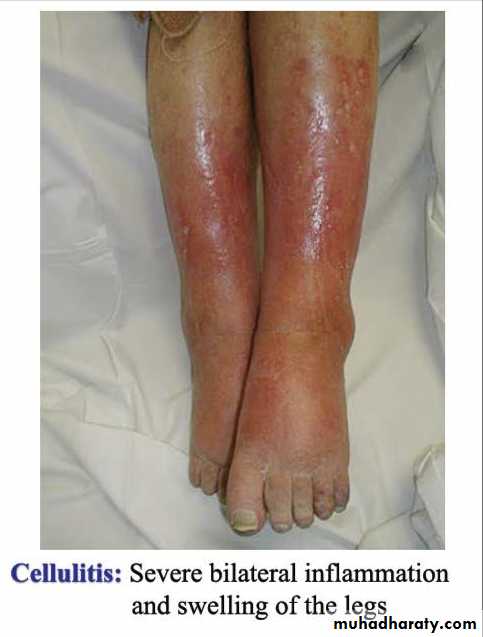 
Chronic Inflammation
It is inflammation of prolonged duration (weeks to months to years) in which active inflammation, tissue injury, and healing proceed simultaneously.
Characteristic of chronic inflammation is:

An infiltration by mononuclear cells (macrophages) and lymphocytes, instead of the influx of neutrophils commonly seen in acute inflammation.
Chronic inflammation also involves the proliferation of fibroblasts instead of exudates.

Cellular responses.
At the biochemical level, many of the responses that occur during acute inflammation are associated with the release of chemical mediators.

The manifestation of acute inflammation can be divided into two categories:

Figure 1: Vascular phase of acute inflammation. (A) Normal capillary bed. (B) Acute inflammation with vascular dilation causing increased redness and heat, movement of fluid into the interstitial spaces (swelling), extravasation of plasma proteins into the extracellular spaces (exudate), and emigration of leukocytes.


The Cellular Stage
Emigration of the leukocytes from the microcirculation and accumulation in the focus of injury (cellular recruitment and activation.
Two types of leukocytes participate in the acute inflammatory response:
The granulocytes and monocytes.
Electron micrograph showing margination of neutrophils in acute inflammation.

Circulating blood leukocytes are required to migrate to sites of tissue injury and infection with the principal aim of eliminating the primary inflammatory trigger and contributing to tissue repair.
In innate immunity, this process is largely initiated by pathogen-associated molecular patterns (PAMPs), released by invading microorganisms, and damage-associated molecular patterns (DAMPs), derived from damaged and/or dead-cells, or in response to tissue and/or cellular stress 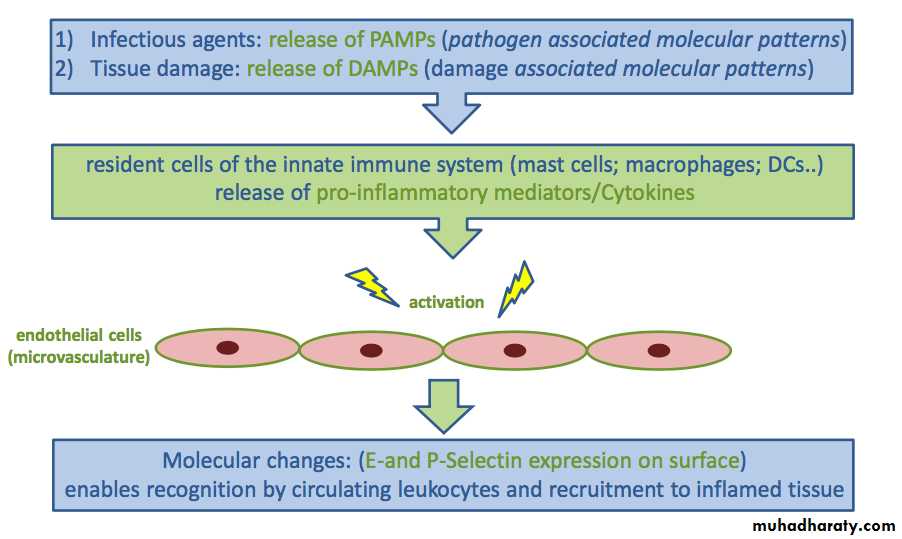 The sequence of events in the cellular response to inflammation includes:
(1) Pavementing
(2) Emigration
(3) Chemotaxis
(4) Phagocytosis

During the early stages of the inflammatory response, fluid leaves the capillaries, causing blood viscosity to increase.


The release of chemical mediators (i.e., histamine, leukotrienes, and kinins) and cytokines affects the endothelial cells of the capillaries and causes the leukocytes to increase their expression of adhesion molecules.
As this occurs, the leukocytes slow their migration and begin to marginate, or move to and along the periphery of the blood vessels.

The initial interactions are represented by a three-step model:

Leukocytes are slowed as they pass through a venule and roll on the surface of the endothelium. This is mediated by selectins interaction with carbohydrates on glycoproteins.
The slowed leukocytes have an opportunity to respond to signaling molecules at the endothelial surface like, chemokines.
Activation upregulates the affinity of leukocytes integrins which now engage the cellular adhesion molecules on the endothelium to cause firm adhesion and initiate a program of migration.

The three steps model of leukocyte (neutrophils) adhesion can be summarized by:

Tethering: An interaction between Endothelial (E)-selectin and carbohydrate group on CD15.
Triggering: Neutrophil can now receive signals from chemokines or by direct signaling from endothelial surface molecules, thus it receive sufficient signal to trigger migration.
Adhesion: The triggering upregulates integrins –CR3&LFA-1-, so they bind to ICAM-1 induced on the endothelium by inflammatory cytokines.


The process by which leukocytes migrate in response
to a chemical signal is called chemotaxis.
During the next and final stage of the cellular response, the neutrophils and macrophages engulf and degrade the bacteria and cellular debris in a process called phagocytosis.

The patterns of leukocyte migration through the body are determined by interactions between circulating leukocytes and endothelium of the blood vessels.
This process occurs principally in venules because:
• The signaling molecules and adhesion molecules are selectively expressed in venules.
• the haemodynamic shear force in the venules is relatively low and this allow time for leukocytes to receive signals from the endothelium.
• The endothelial surface charge is lower in venules.

A) Many cells retain large intercellular stores of these adhesion molecules in vesicle, which can be directed to the cell surface within minutes following cellular activation.

B) Alternatively, new molecules can be synthesized and transported to the cell surface, a process which usually takes several hours.

Selectin family has a distal lectin-like domain that enables these molecules to bind to specific carbohydrate groups.

Mucin like family: The mucins are a group of serine- and threonine- rich proteins that are heavily glycosylated. Their extended structure allows them to present sialylated carbohydrate ligands to selectins.

Integrin family: The integrins are heterodimeric proteins (consist- ing of an and a chain) that are expressed by leukocytes and facilitate both adherence to the vascular endothelium and other cell-to-cell interactions.
Ig Superfamily : ICAMS Several adhesion molecules contain a variable num- ber of immunoglobulin-like domains and thus are classified in the immunoglobulin superfamily. Included in this group are ICAM-1, ICAM-2, ICAM-3, and VCAM, which are ex- pressed on vascular endothelial cells and bind to various integrin molecules.


The four types of CAM’s 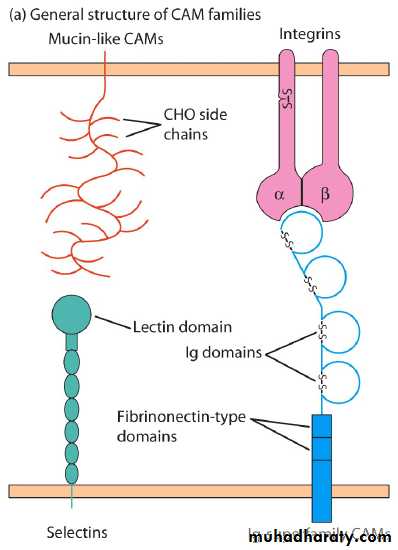 Selectins – resp. for intial contact between leukocytes and endothelial cells

The four types of CAM’s

Bind to ICAM’s along vasc. endothelium

Step one: Selectins bind to carbohydrates to slow the circulating leukocytes; the selectins include the molecules E-, P- &L-selectins, they expressed on endothelium, platelet and some leukocytes.
The carbohydrate ligands for the selectins may be associated with several different proteins, for example Sgp-200 expressed on high endothelial venules (HEV) which bind to L-selectin on lymphocytes and at sites of inflammation E- and P-selectins, which are induced on activated endothelium, bind to the sialyl Lewis-X carbohydrate associated with CD15, present on many leucocytes or bind to P-selectin glycoprotein ligand (PSGL-1) molecule which present on type-1 T-helper (Th-1) cells.
When selectins bind to their ligands, the circulating cell are slowed within the venules.


Step two: Chemokines and other chemotactic molecules trigger the tethered leukocytes.
The chemokines are a group of at least 40 small cytokines involved in cell migration, activation and chemotaxis.
They determine cells will cross the endothelium.
Most chemokines have two binding sites:
One for their specific receptors and second for carbohydrate-group on proteoglycans, such as heparan sulphate.
This allow them to attach to the luminal surface of endothelium (blood side), ready to trigger any tethered leucocytes.
The chemokines may be produced by endothelium itself; in addition chemokines produced by cells in tissues can be transported to the luminal side of the endothelium. The chemokines, which signal the inward migration of required populations of leucocytes.

Step three: Integrins on the leukocytes bind to cell adhesion molecules on the endothelium.
leukocytes and many other cells in the body interact with other cells and components of the extracellular matrix using a group of molecules called integrins, using these molecules leucocytes develop a firm adhesion to the endothelium.
Normally the binding affinity of the integrins for the cell adhesion molecules (CAMs) are constitutively expressed, while other are specifically induced on particular endothelia, or at sites of inflammation. 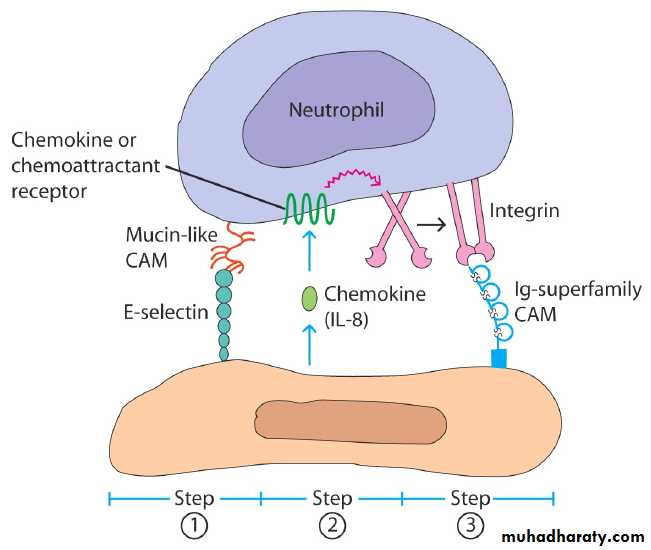 CAM’s function in “Homing” and “Trafficking” of lymphocytes 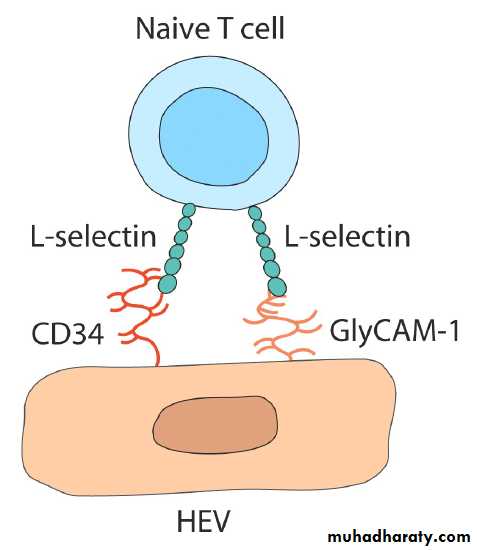 Naive T cells tend to home to secondary lymphoid tissues through their HEV regions. The initial interaction involves the homing receptor L-selectin and mucin-like cell-adhesion molecules such as CD34 or GlyCAM-1 expressed on HEV cells. 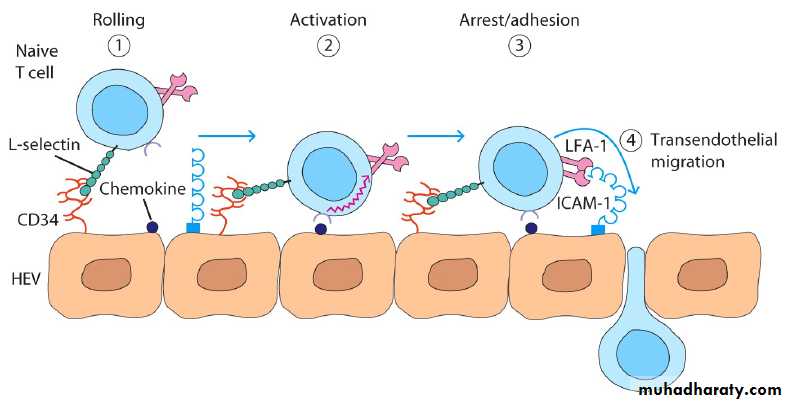