THE GRADED NATURE OF THE INJURYRESPONSEIt is important to recognise that the response to injury is graded:the more severe the injury, the greater the response .This concept not only applies to physiological and metabolic changes but also to immunological changes or sequelae. Thus, following elective surgery of intermediate severity, there may be a transient and modest rise in temperature, heart rate, respiratory rate, energy expenditure and peripheral white cell count. Following major trauma or sepsis, these changes are accentuated, resulting in a systemic inflammatory response syndrome (SIRS), hypermetabolism, marked catabolism, shock and even multiple organ dysfunction (MODS).

Not only is the metabolic response graded, but it also evolveswith time. In particular, the immunological sequelae of majorinjury evolve from a proinflammatory state driven primarily bythe innate immune system (macrophages, neutrophils, dendriticcells) into a compensatory anti-inflammatory response syndrome(CARS) characterised by suppressed immunity and diminishedresistance to infection. In patients who develop infective complications, the latter will drive ongoing systemic inflammation, the acute phase response and continued catabolism.

MEDIATORS OF THE METABOLICRESPONSE TO INJURYThe classical neuroendocrine pathways of the stress responseconsist of afferent nociceptive neurones, the spinal cord, thalamus, hypothalamus and pituitary. Corticotrophin releasingfactor (CRF) released from the hypothalamus increasesadrenocorticotrophic hormone (ACTH) release from the anteriorpituitary. ACTH then acts on the adrenal to increase thesecretion of cortisol. Hypothalamic activation of the sympatheticnervous system causes release of adrenalin and also stimulatesrelease of glucagon. Intravenous infusion of a cocktail ofthese ‘counter-regulatory’ hormones (glucagon, glucocorticoidsand catecholamines) reproduces many aspects of the metabolicresponse to injury.

There are many other players,including alterations in insulin release and sensitivity, hypersecretion of prolactin and growth hormone (GH) in the presence of low circulatory insulin-like growth factor-1 (IGF-1) and inactivation of peripheral thyroid hormones and gonadal function. 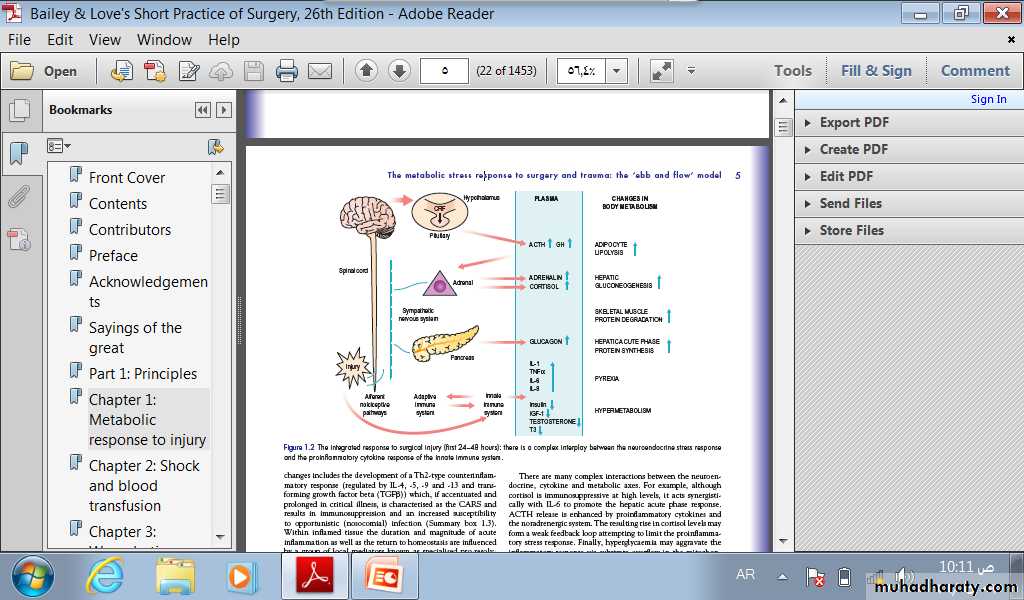 Changes in organ function (e.g. renal hypoperfusion/impairment) may be induced by excessive vasoconstriction via endogenous factors such as endothelin-1.


There are many complex interactions between the neuroendocrine, cytokine and metabolic axes. For example, although cortisol is immunosuppressive at high levels, it acts synergistically with IL-6 to promote the hepatic acute phase response. ACTH release is enhanced by proinflammatory cytokines and the noradrenergic system

THE METABOLIC STRESS RESPONSETO SURGERY AND TRAUMA: THE ‘EBBAND FLOW’ MODELIn 1930, Sir David Cuthbertson divided the metabolicresponse to injury in humans into ‘ebb’ and ‘flow’ phases(Figure 1.4). The ebb phase begins at the time of injury andlasts for approximately 24–48 hours. It may be attenuated byproper resuscitation, but not completely abolished.

are catecholamines, cortisol and aldosterone (following activation of the renin–angiotensin system). The magnitude of this neuroendocrine response depends on the degree of blood loss and the stimulation of somatic afferent nerves at the site ofinjury. The main physiological role of the ebb phase is toconserve both circulating volume and energy stores for recoveryand repair.

Following resuscitation, the ebb phase evolves into a hypermetabolic flow phase, which corresponds to SIRS. This phase involves the mobilisation of body energy stores for recovery and repair, and the subsequent replacement of lost or damaged tissue.

The flow phase may be subdividedinto an initial catabolic phase, lasting approximately 3–10days, followed by an anabolic phase, which may last for weeksif extensive recovery and repair are required following seriousinjury.

The combination of pronounced or prolonged catabolism inassociation with insulin resistance places patients within thisphase at increased risk of complications, particularly infectiousand cardiovascular.


CATABOLIC ELEMENTS OF THEFLOW PHASE OF THE METABOLICSTRESS RESPONSE the essence of this coordinated response is to allow the body to reprioritise limited resources away from peripheral tissues (muscle, adipose tissue, skin) and towards keyviscera (liver, immune system) and the wound

2-Alterations in skeletal muscle proteinmetabolismMuscle protein is continually synthesised and broken down witha turnover rate in humans of 1–2 per cent per day, and with agreater amplitude of changes in protein synthesis

although nitrogen losses also occur in the respiratory muscles (predisposing the patient to hypoventilation and chest infections) and in the gut (reducing gut motility). Cardiac muscle appears to be mostly spared.

Under extreme conditions of catabolism (e.g. major sepsis), urinary nitrogen losses can reach 14–20 g/day; this is equivalent to the loss of 500 g of skeletal muscle per day.


Postoperative patients with insulin resistance behave in asimilar manner to individuals with type II diabetes mellitus. Themainstay of management of insulin resistance is intravenousinsulin infusion. Insulin infusions may be used in either anintensive approach (i.e. sliding scales are manipulated to normalise the blood glucose level) or a conservative approach (i.e. insulin is administered when the blood glucose level exceeds a defined limit and discontinued when the level falls) 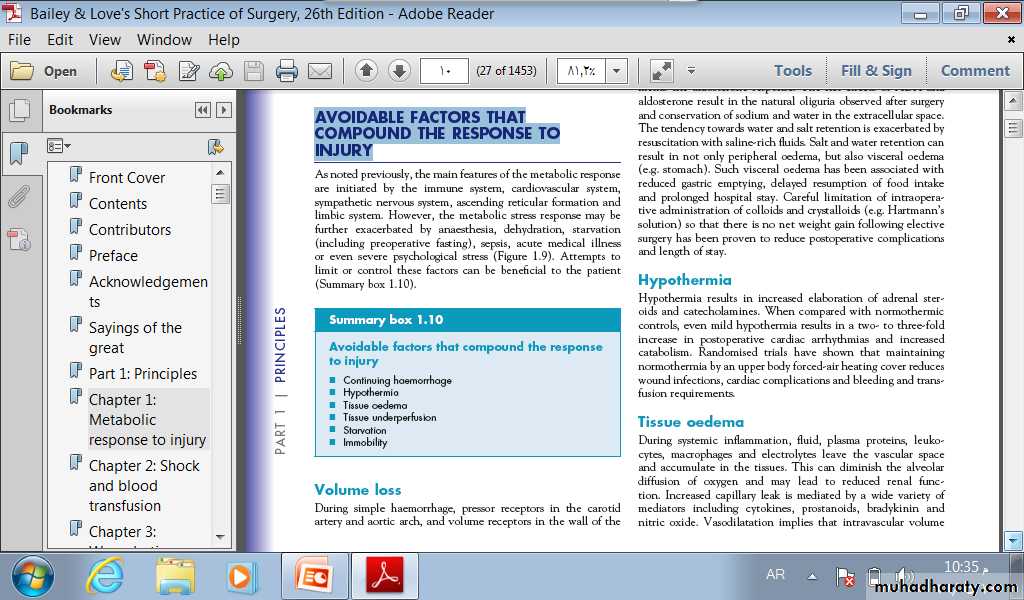 Volume lossDuring simple haemorrhage, pressor receptors in the carotidartery and aortic arch, and volume receptors in the wall of theleft atrium, initiate afferent nerve input to the central nervoussystem (CNS), resulting in the release of both aldosterone andantidiuretic hormone (ADH). Pain can also stimulate ADHrelease. ADH acts directly on the kidney to cause fluid retention.Decreased pulse pressure stimulates the juxtaglomerular apparatus in the kidney and directly activates the renin–angiotensin system, which in turn increases aldosterone release.

Tissue oedemaDuring systemic inflammation, fluid, plasma proteins, leukocytes,macrophages and electrolytes leave the vascular spaceand accumulate in the tissues. This can diminish the alveolardiffusion of oxygen and may lead to reduced renal function.

Systemic inflammation and tissueunderperfusion The vascular endothelium controls vasomotor tone and microvascular flow, and regulates trafficking of nutrients and biologically active molecules. When endothelial activation is excessive, compromised microcirculation and subsequent cellular hypoxia contribute to the risk of organ failure.

Maintainingnormoglycaemia with insulin infusion during critical illness has been proposed to protect the endothelium,


StarvationDuring starvation, the body is faced with an obligate need togenerate glucose to sustain cerebral energy metabolism (100 g ofglucose day–1). This is achieved in the first 24 hours by mobilising glycogen stores and thereafter by hepatic gluconeogenesis from amino acids, glycerol and lactate. The energy metabolism of other tissues is sustained by mobilising fat from adipose tissue.