MCQ
A 39-years-old lady is brought to ER with clinical diagnosis of tetanus after a penetrating wound sole 15 days back. Regarding management of tetanus, what should be line of action?
• Inquire about her immunization status of tetanus
• Give tetanus toxoid irrespective of her immune status
• Give her TIG as a management protocol
• Reassure the relative as she does not need any immunization at present 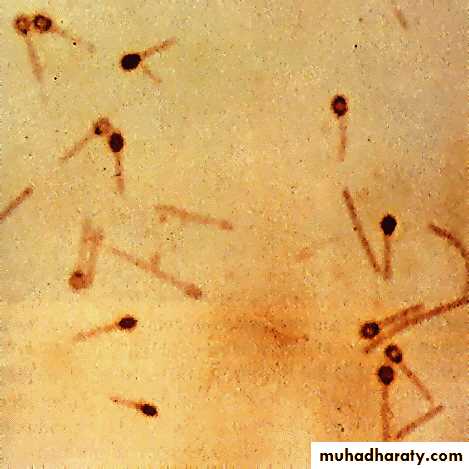 Round terminal spores give cells a “drumstick” or “tennis racket” appearance

Found in soil, and in the intestinal tracts and feces of various animals.

The organism is sensitive to heat and cannot survive in the presence of oxygen.

Spores are very resistant to

pores can survive for a long time in environment---100yrs possibly!

Infection :by the production of a potent protein toxin
tetanus toxin or tetanospasmin 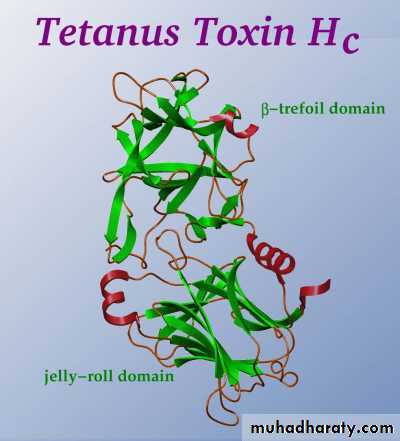 Produced when spores germinate and vegetative cells grow after gaining access to wounds. The organism multiplies locally and symptoms appear remote from the infection site.

One of the three most poisonous substances known on a weight basis, the other two being the toxins of botulism and diphtheria.


Because the toxin has a specific affinity for nervous tissue, it is referred to as a neurotoxin.

when the oxygen levels of the surrounding tissue is sufficiently low, the implanted C. tetani spore then germinates into a new, active vegetative cell that grows and multiplies and most importantly produces tetanus toxin

Tetanospasmin is an extremely lethal neurotoxin

tetanospasmin at the wound site, the toxin starts to migrate along nerves (peripheral motor nerve ending) where it blocks the release of inhibitory neurotransmitters
The anterior horn cell are affected after the exotoxin has passed into the blood stream

As a consequence of too much “activator transmitters”, muscles are OVERstimulated to repeatedly contract—called spastic paralysis 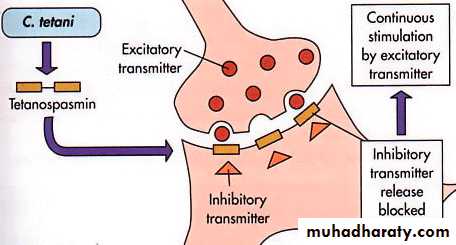 Mechanism of Action of Tetanus Toxin 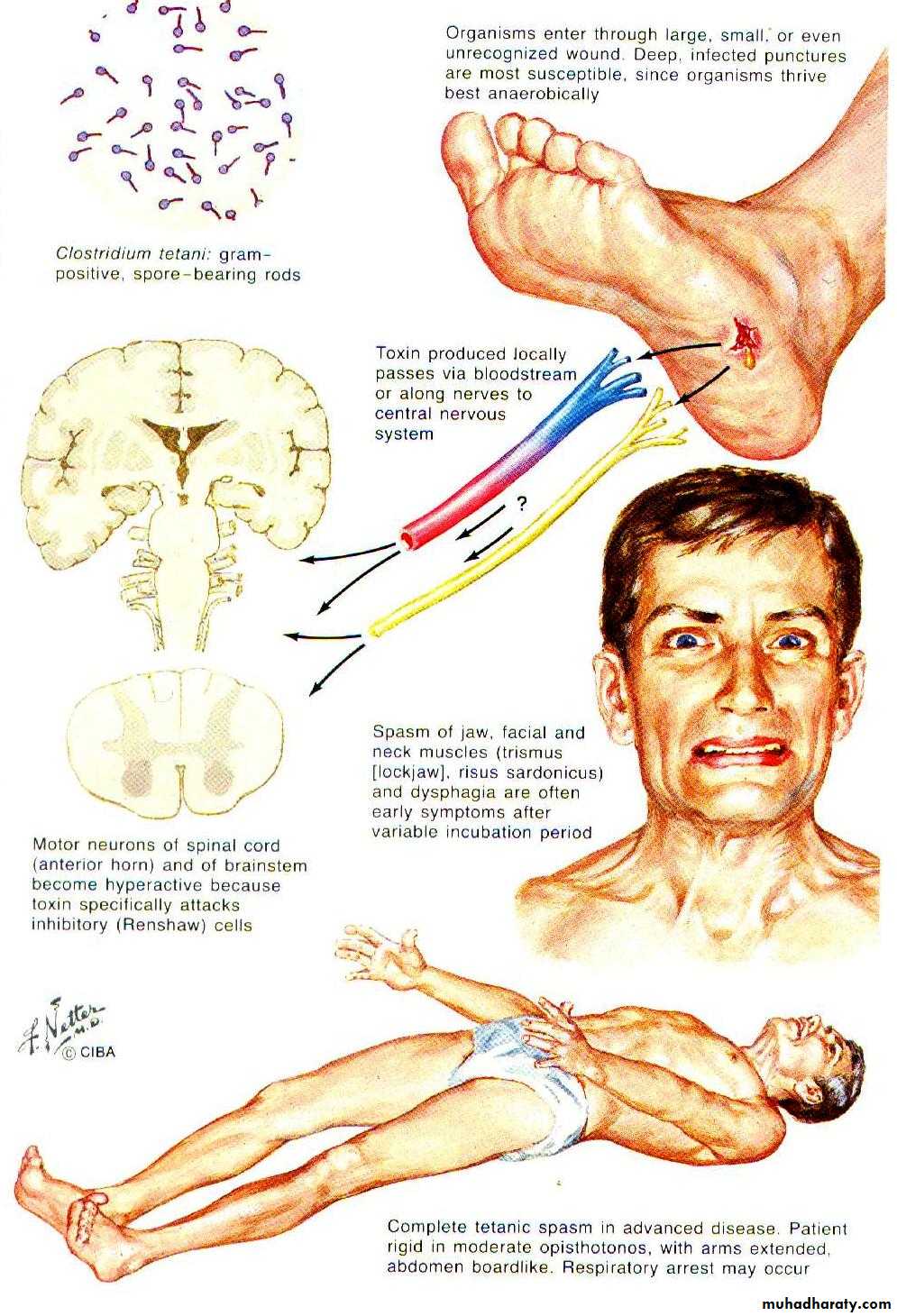 The first muscles affected by tetanus are controlled by cranial nerves
Facial and jaw muscle first affected resulting in trismus. stiffness of jaw (also called lockjaw )
Eye muscles (cranial nerves III, IV) rarely are involved
if the muscle spasms affect the larynx or chest wall, they may cause asphyxiation
stiffness of abdominal ,back muscles, extremities may become so violent and strong contracted , that bone fractures may occur

The affected individual is conscious throughout the illness, but cannot stop these contractions
Feature of sympathetic over activity (restlessness, agitated,sweating,labile hypo and hypertension,tachycardia)
Fever is usually absent 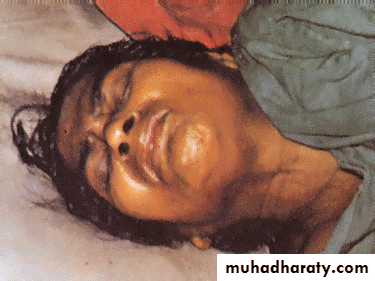 The back muscles are more powerful, thus creating the arc backward 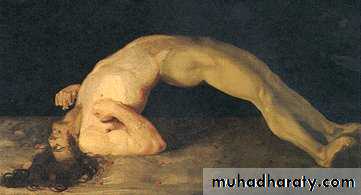 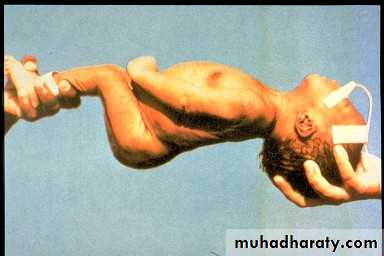 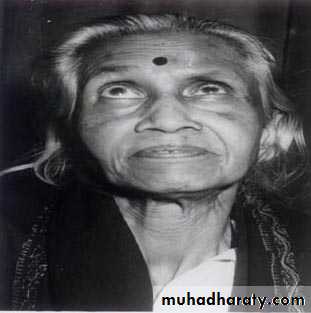 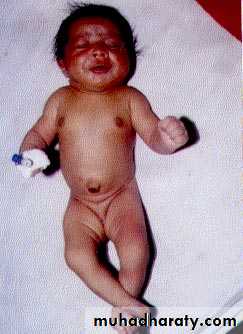 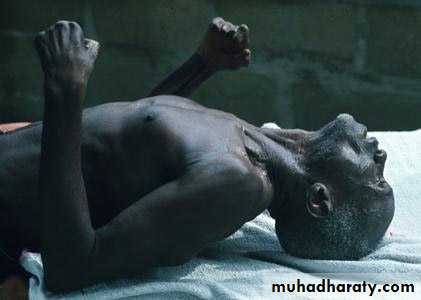 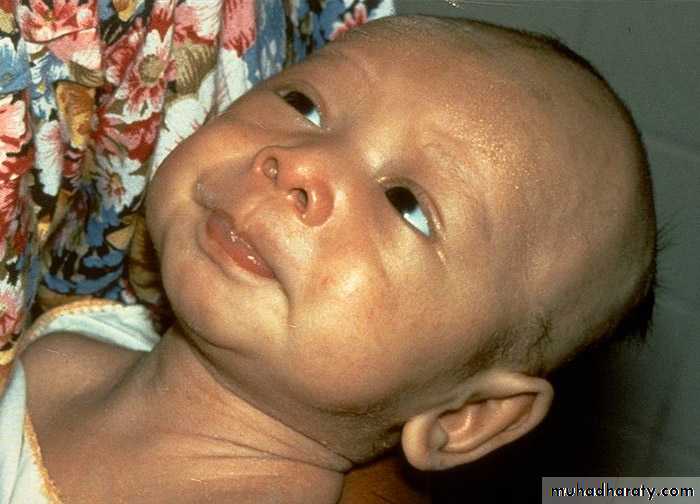 Form of generalized tetanus that occurs in newborn infants born without protective passive immunity because the mother is not immune.
Usually occurs through infection of the unhealed umbilical stump, particularly when the stump is cut with an unsterile instrument.

Local tetanus: persistent muscle contractions in the same anatomic area as the injury, which will however subside after many weeks; very rarely fatal; milder than generalized tetanus, although it could precede it.

may occur from tetanus, often from cardiac (heart) and respiratory (lung) effects or secondary complications from the infection


diagnosis
The diagnosis of tetanus is based on clinical findings

although a characteristic electromyogram is suggestive.

Diagnostic studies generally are of little value, as cultures of the wound site are negative for C. tetani two-thirds of the time.
When the culture is positive, it confirms the diagnosis of tetanus

Diagnosis unlikely to be tetanus

Serum tetanus antitoxin once it is detected ---this protective, and make diagnosis of Tetanus unlikely

If treatment is not sought early, the disease is often fatal.
Despite antibiotic had unproven value,however it can eradicate the vegetative cell.
penicillin10-12 millon i.v
metronidazol(500 mg 4X daily) to eradicate vegetative organisms in the wound and prevent further toxin production.

Due to the extreme potency of the toxin, immunity does not result after the active tetanus.

What else can be done?

Remove and destroy the source of the toxin through surgical exploration and cleaning of the wound (debridement).

Sedation may be necessary to keep the affected person calm. relax the muscles and relieve pain.

Respiratory support with oxygen, endotracheal tube, and mechanical ventilation may be necessary.

A person recovering from tetanus should begin active immunization with tetanus toxoid (Td) during convalescence.


The tetanus toxoid is a formalin-inactivated toxin, with an efficiency of approx. 100%.

Because the antitoxin levels decrease over time, booster immunization shots are needed every 10 years.