Bile Secretion by the Liver pp

BILE SECRETION BY THE LIVER

Objectives of our lecture:
• What is the physiological anatomy of bile secretion?
• What is the composition of bile?
• Secretions from small and large intestine?

One of the many functions of the liver is to secrete bile, normally between 600 and 1000 ml/day. Bile serves two important functions.
First, bile plays an important role in fat digestion and absorption, not because of any enzymes in the bile that cause fat digestion, but because bile acids in the bile perform two functions:

(1) They help emulsify the large fat particles of the food into many minute particles, the surface of which can then be attacked by lipase enzymes secreted in pancreatic juice.
(2) They aid in absorption of the digested fat end products through the intestinal mucosal membrane.
Second, bile serves as a means for excretion of several important waste products from the blood. These waste products include in particular bilirubin, an end product of hemoglobin destruction, and excesses of cholesterol.

Bile is secreted in two stages by the liver:
1. The initial portion is secreted by the principal functional cells of the liver, the hepatocytes; this initial secretion contains large amounts of bile acids, cholesterol, and other organic constituents. It is secreted into minute bile canaliculi that originate between the hepatic cells.

2. Next, the bile flows in the canaliculi toward the interlobular septa, where the canaliculi empty into terminal bile ducts and then into progressively larger ducts, finally reaching the hepatic duct and common bile duct. From these ducts the bile either empties directly into the duodenum or is diverted for minutes up to several hours through the cystic duct into the gallbladder. 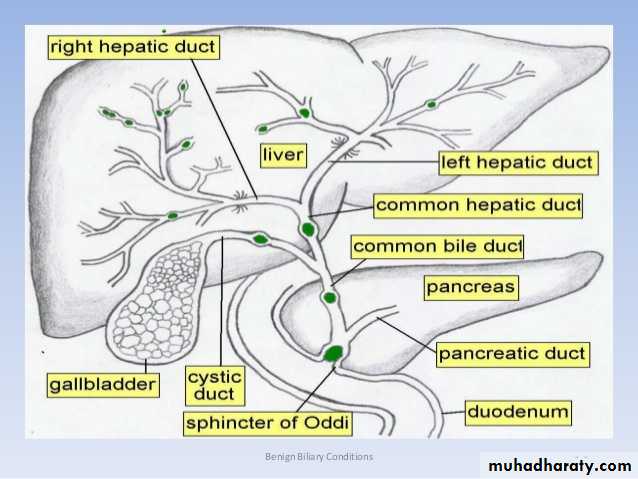 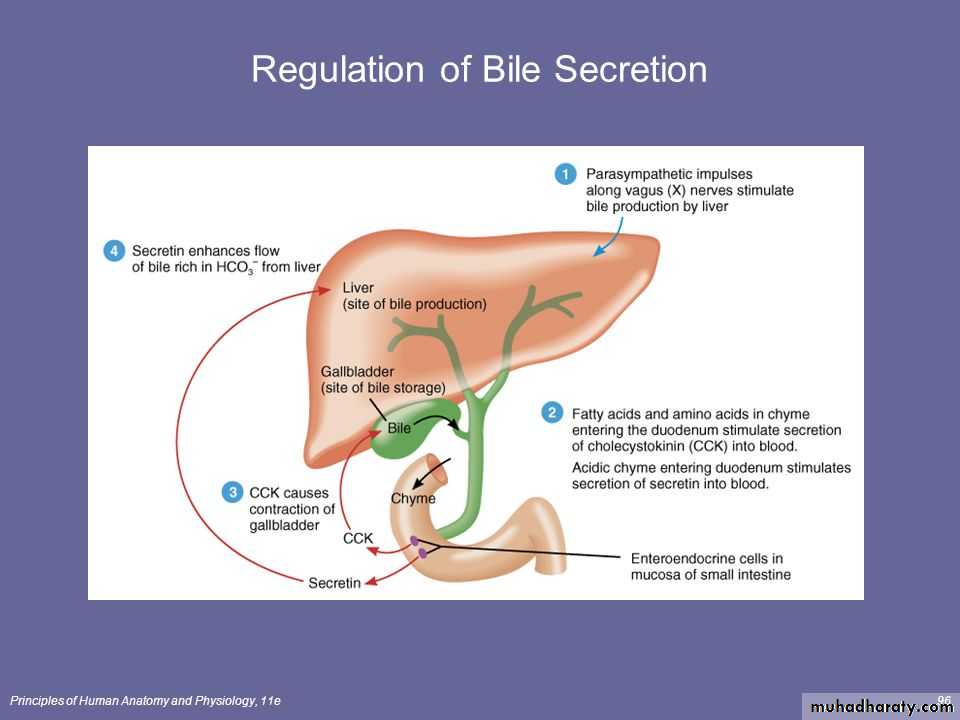 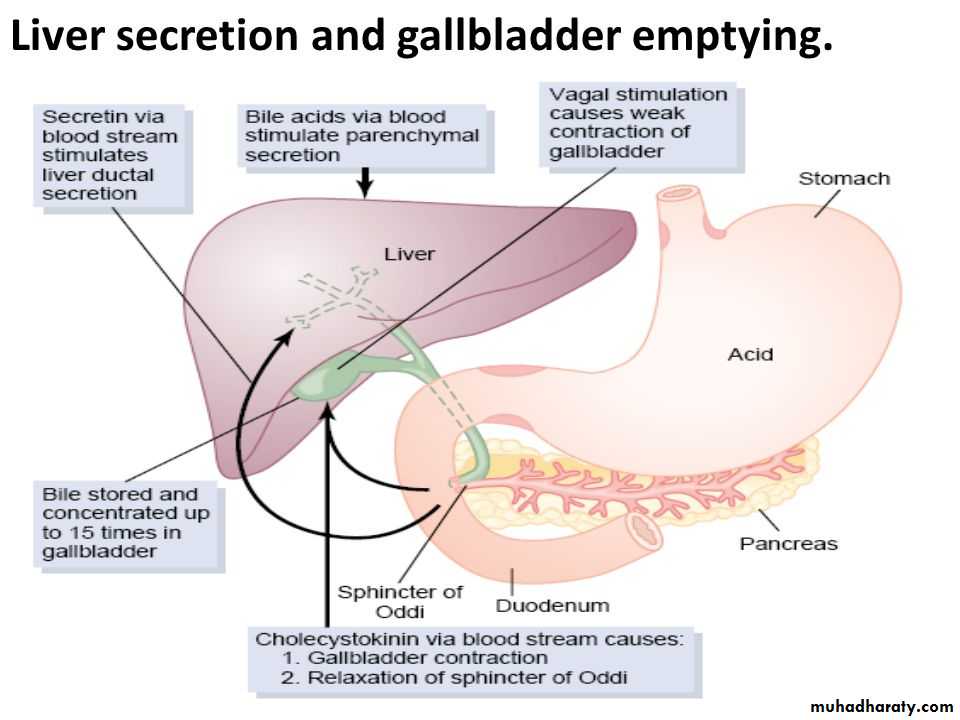 Table below lists the composition of bile when it is first secreted by the liver and then after it has been concentrated in the gallbladder.
By far the most abundant substances secreted in the bile are bile salts, which account for about one half of the total solutes also in the bile. Also secreted or excreted in large concentrations are bilirubin, cholesterol, lecithin, and the usual electrolytes of plasma. 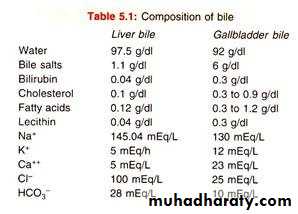 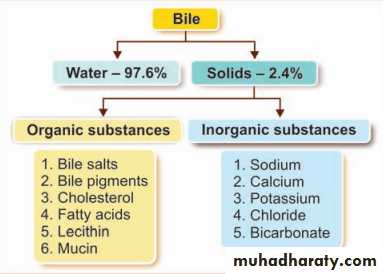 FUNCTION OF BILE SALTS IN FAT DIGESTION AND ABSORPTION

The liver cells synthesize about 6 grams of bile salts daily. The precursor of the bile salts is cholesterol, which is either present in the diet or synthesized in the liver cells during the course of fat metabolism. The cholesterol is first converted to cholic acid or chenodeoxycholic acid in about equal quantities. These acids in turn combine principally with glycine and to a lesser extent with taurine to form glyco- and tauro-conjugated bile acids. The salts of these acids, mainly sodium salts, are then secreted in the bile. The bile salts have two important actions in the intestinal tract:

First, they have a detergent action on the fat particles in the food. This action, which decreases the surface tension of the particles and allows agitation in the intestinal tract to break the fat globules into minute sizes, is called the emulsifying or detergent function of bile salts.

Second, and even more important than the emulsifying function, bile salts help in the absorption of (1) fatty acids, (2) monoglycerides, (3) cholesterol, and (4) other lipids from the intestinal tract. They help in this absorption by forming small physical complexes with these lipids; the complexes are called micelles, and they are semisoluble in the chyme because of the electrical charges of the bile salts.

Without the presence of bile salts in the intestinal tract, up to 40 percent of the ingested fats are lost into the feces and a metabolic deficit often develops because of this nutrient loss.

SECRETIONS OF THE SMALL INTESTINE

SECRETION OF MUCUS BY BRUNNER’S GLANDS IN THE DUODENUM
An extensive array of compound mucous glands, called Brunner’s glands, is located in the wall of the first few centimeters of the duodenum, mainly between the pylorus of the stomach and the papilla of Vater, where pancreatic secretion and bile empty into the duodenum. 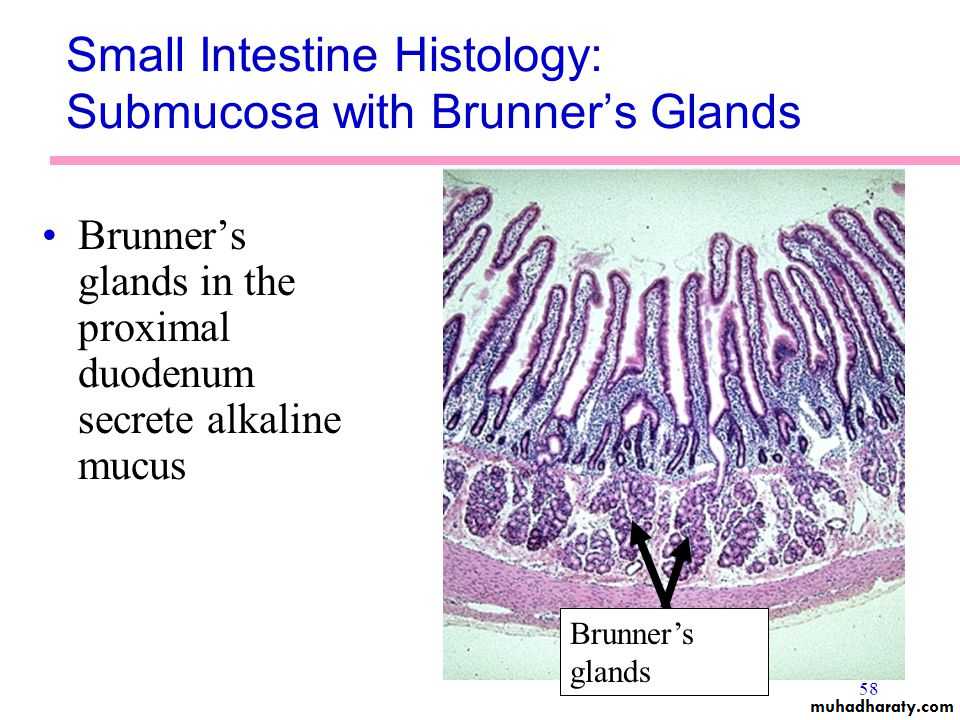 The function of the mucus secreted by Brunner’s glands is to protect the duodenal wall from digestion by the highly acidic gastric juice emptying from the stomach. In addition, the mucus contains a large excess of bicarbonate ions, which add to the bicarbonate ions from pancreatic secretion and liver bile in neutralizing the hydrochloric acid entering the duodenum from the stomach.

By far the most important means for regulating small intestine secretion are local enteric nervous reflexes, especially reflexes initiated by tactile or irritative stimuli from the chyme in the intestines

SECRETION OF MUCUS BY THE LARGE INTESTINE

Mucus Secretion. The mucosa of the large intestine, like that of the small intestine, has many crypts of Lieberkühn; however, unlike the small intestine, it contains no villi. The epithelial cells secrete almost no digestive enzymes. Instead, they contain mucous cells that secrete only mucus. This mucus contains moderate amounts of bicarbonate ions secreted by a few non–mucus-secreting epithelial cells. The rate of secretion of mucus is regulated principally by direct, tactile stimulation of the epithelial cells lining the large intestine and by local nervous reflexes to the mucous cells in the crypts of Lieberkühn

Stimulation of the pelvic nerves from the spinal cord, which carry parasympathetic innervation to the distal one half to two thirds of the large intestine, also can cause a marked increase in mucus secretion..
During extreme parasympathetic stimulation, often caused by emotional disturbances, so much mucus can occasionally be secreted into the large intestine that the person has a bowel movement of ropy mucus as often as every 30 minutes; this mucus often contains little or no fecal material. 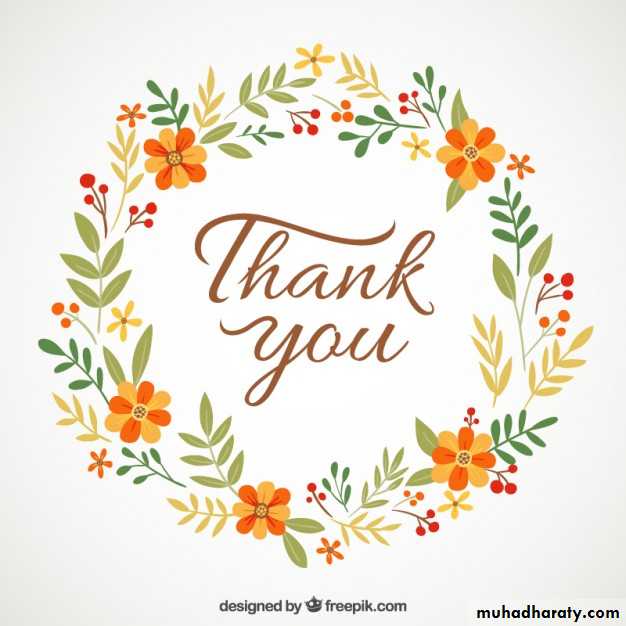